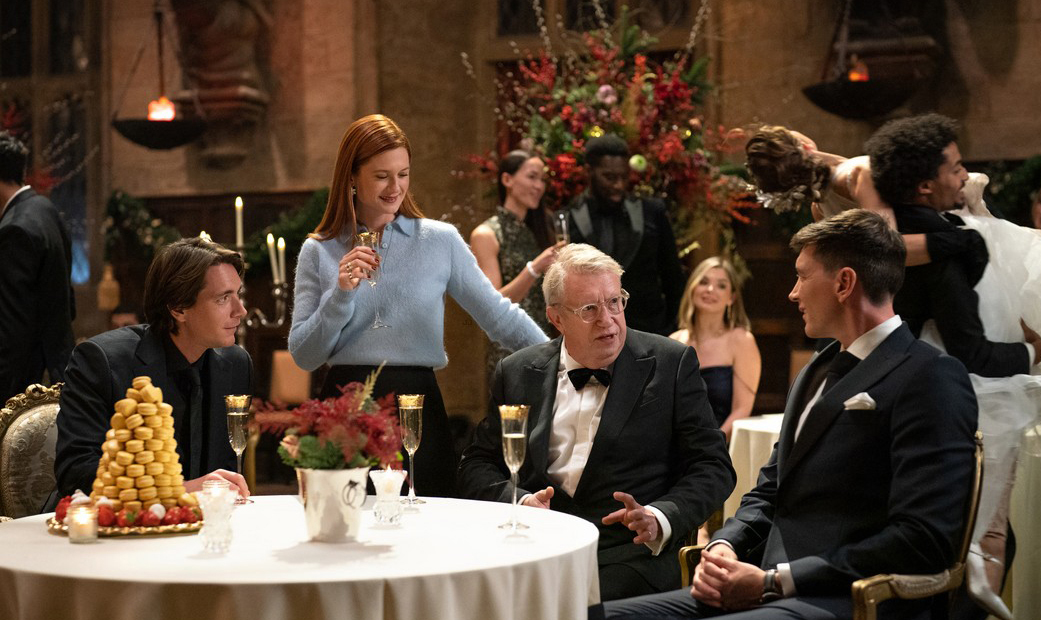 Cameraman: “I’ve got some great footage of Mark Williams talking to Bonnie Wright and James and Oliver Phelps about on-set antics and the importance of the Weasley family to Harry Potter.”
Reunion producers: “Thank you. You can put it right here in the trash.”
—Erin

Arthur: “Hey, you know Muggles have these things called ‘movies’? I just saw my first one, and it was incredible! It was called Troll 2. I wonder if they get any better than that…”
—Sam

Mark Williams: “Honestly, when we were filming, I thought you were both actually just one guy!”
—Carol P.

The One with the Weasleys at Dinner.
—Nicole R.

Bonnie: “What happened to the good old days when men would offer up their seat for a lady?”
—Emma

Mark Williams: “So while filming Order of the Phoenix, the visual effects team was able to edit out the goiter on my neck that was this big!”
—Liam

Ginny had finally found her jumper, which was, in fact, on the cat.
—Nav

Mark: “So before we started shooting Chamber of Secrets, director Chris Columbus says, ‘Your son Percy will have a head shaped like this.’ And I thought, ‘Oh, just like the TV show Hey Arnold!'”
—Josh

The Weasleys chat calmly while Dean carries a random woman away over his shoulder.
—MeBR

Security for the Hogwarts reunion event was very aggressive, as a party crasher was swept off her feet and hauled out.
Girl in the white dress: “But I was an extra in the Yule Ball scene, I swear!!”
—Friend of Fawkes

“And that’s how your mum and I finally got rid of the gnomes in the garden!”
—Hagrid’s Helper

Oliver: “Merry Christmas.”
Mark: “It’s great to be with all my children again. Hang on – aren’t you dead? Or are you the other one?”
James: “It’s been 20 years!”
—TopGeere

Arthur: “So for my retirement party…”
Fred: “I will fellytone and place an order for 1,000 rubber ducks.”
—Vidula S.

Bonnie: “At last, I am the sole remaining ginger.”
—Luke

Arthur Weasley: “I realize that I never taught all of you how to blend in when you’re at a formal gathering of Muggles, but you seem to have mastered the art of drinking from flutes without my expert tutelage.”
—Friend of Fawkes

Mark Williams: “So how are you, Oliver?”
James: “He’s not Oliver. I am!”
Oliver: “Honestly, man, you call yourself our on-screen father.”
Mark: “Oh, sorry, James.”
—Ophelia

Mark: “Hey, you! Yeah, you, stop staring so intently at those macarons.”
—Me

No one would know that blue sweater was once a Pygmy Puff.
—Andrea

“Can you believe they’re making us pay for our own butterbeer?”
—Kassia

Mr. Weasley/Mark Williams: “… So as it turns out, the function is just to keep you company in the bathtub!”
—David