With the start of 2022 came Harry Potter reunion special Harry Potter 20th Anniversary: Return to Hogwarts, and it’s filled with all the laughter (and tears) that any Potterhead would expect from bringing members of the film’s cast and crew together again after multiple years and a pandemic. Despite occasionally mixed reviews from outside the fandom, the tone and framing of Return to Hogwarts work well – and left us wanting all the interview footage that didn’t make the cut.

Around midnight Pacific Time, HBO Max released a separate poster for Return to Hogwarts beyond the one that was used to promote the special in the days leading up to it. The new poster features Tom Felton (Draco Malfoy), Matthew Lewis (Neville Longbottom), Evanna Lynch (Luna Lovegood), James Phelps (Fred Weasley), Oliver Phelps (George Weasley), and Bonnie Wright (Ginny Weasley), in addition to Rupert Grint, Daniel Radcliffe, and Emma Watson, posing with the Hogwarts Express. Missing from the poster, however, is Alfred Enoch (Dean Thomas), who also appears in the special. 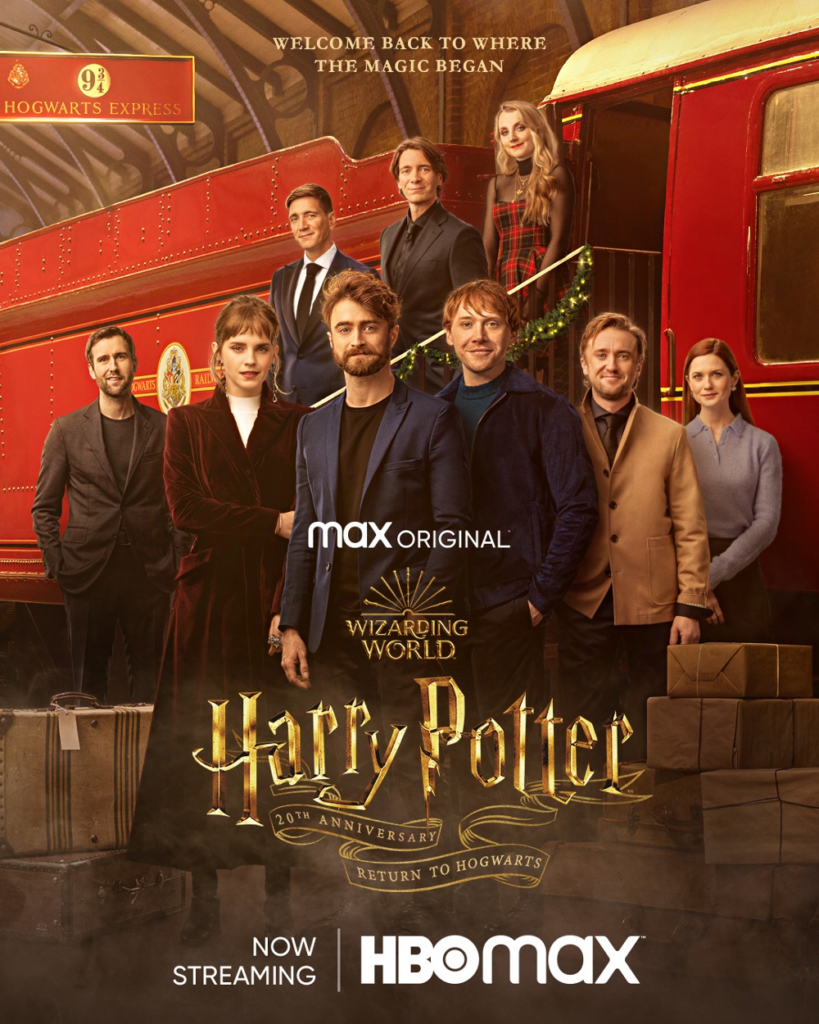 While we certainly can’t recap an hour and 45 minutes of content – including footage from behind the scenes of the film series – here, it is clear how much the reunion meant to the members of the cast and crew who took part in it. Most of the reunion itself takes the form of individual interviews rather than the Great Hall scenes used in the promotional materials, though this is hardly a loss. Instead, it really allows each person’s thoughts and feelings to come through. From Harry Potter and the Goblet of Fire director Mike Newell’s admission that maybe he shouldn’t have demonstrated to James and Oliver Phelps how he wanted their characters to fight upon attempting to outsmart the Age Line because he cracked some ribs in the process to Robbie Coltrane’s hope that people will still be watching Hagrid 50 years from now, the mood is often bittersweet.

What is apparent throughout is how much love and trust there was – and is – between members of the cast and how the fictional parent-child relationships carried over into the real world. For instance, both Jason Isaacs (Lucius Malfoy) and Tom Felton speak glowingly of the late Helen McCrory (Narcissa Malfoy), who passed away in April 2021 at the age of 52.

More lighthearted moments from the special include discussions of what it was like to be a teenager on a film set. (At one point, Daniel and Emma mention that they used to give each other dating advice!) Over ten years on from the end of the films, the shared experience of having been thrust into the spotlight and the bond that it created for the then child actors also comes through. Beyond Return to Hogwarts itself, Rupert recently spoke with Entertainment Weekly about his relationships with his Harry Potter costars and discussed with ET what fatherhood has been like for him.

Even members of the cast who did not appear in Return to Hogwarts have recently spoken about their experiences working on the Harry Potter films. Jessie Cave (Lavender Brown) has said that her children are embarrassed that she kissed Ron Weasley, and Miriam Margolyes (Professor Sprout) has described the difference that the series has made to her career.

Have you watched Harry Potter 20th Anniversary: Return to Hogwarts? What did you think? Let us know your thoughts in the comments below.