Set for release on March 1 is 76398 Hogwarts Hospital Wing, which is “bursting with magical play possibilities […] from caring role play in the infirmary to time-travel adventures in the clock tower.”

The set will cost $49.99 and features minifigures from Harry Potter and the Prisoner of Azkaban: Harry Potter, Hermione Granger, Ron Weasley, and Madam Pomfrey. The Harry, Ron, and Hermione figures are sporting the clothing worn on the night Harry and Hermione travel back in time to save Sirius Black and Buckbeak.

The minifigures in the Hospital Wing set

The set is packed with fun ways to play, and it is part of a series of modular sets that can be combined to create Hogwarts Castle.

Inside the Hogwarts Hospital Wing are 3 beds, a screen and Madam Poppy Pomfrey pushing her cart filled with potions and candy. Ron’s in bed with a bandaged leg, and there’s a bottle of the revolting Skele-[G]ro [on] hand. Meanwhile, up in the clock tower, Harry and Hermione are using the Time-Turner. Kids twist the tower’s turret to make the clock’s hands spin and travel back in time for another magical adventure. The top and bottom halves of the set detach so other modules can be stacked in between, and the set connects with others in the series to create an entire Hogwarts Castle. 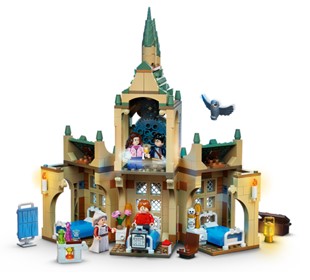 Some elements are built in, such as the storage cupboard, while others are detached, like the armchair, desk, chairs, crystal ball and teacups, which lift out to expand the play space. The set combines with others in the range and packs neatly into the closed playbook, so kids can carry it wherever they go and store it neatly until next time. 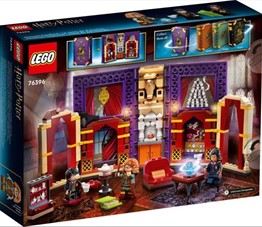 The other Hogwarts Moment set that will be released on March 1 is 76397 Hogwarts Moment: Defence Class, which features Mad-Eye Moody’s classroom from Harry Potter and the Goblet of Fire. The set also costs $29.99 and the three minifigures that are included are Mad-Eye Moody, Neville Longbottom, and Hermione Granger.

Some elements are built in, such as the storage shelves and fireplace, while others are detached, like the blackboard, trunk, potion bottles, desk and chairs, which lift out to create an extended play area.

The minifigure version of Mad-Eye Moody can be transformed into Barty Crouch, Jr. by turning the head and replacing the hair, and inside the trunk, you’ll find a microfigure of the real Mad-Eye Moody.

We can’t wait to get our hands on these new sets. Do any of them take your fancy?