For those of us who live more hectic Muggle lives, it can be particularly tough to find any time to read the sacred texts of the Harry Potter book series. Thankfully, audiobooks have changed the way that we consume the written word. Nowadays, we can multitask by passively listening to a book while we’re actively doing other things. In recent years, Pottermore Publishing has made it possible for us Potterheads who want to revisit the wizarding world aurally. And soon enough, we’ll be able to listen and learn about magical creatures or the history of Quidditch in different languages now that Pottermore is teaming up with Storytel to create foreign-language productions of the Hogwarts Library books. 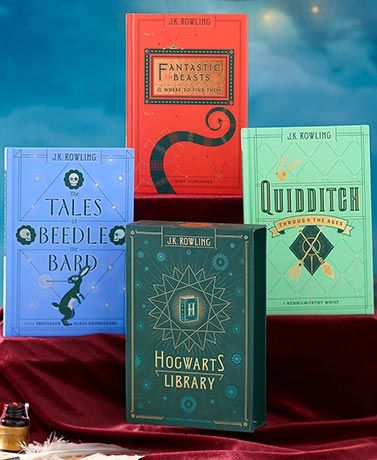 Pottermore Publishing and Storytel will be producing audiobooks of “Fantastic Beasts and Where to Find Them,” “Quidditch Through the Ages,” and “The Tales of Beedle the Bard” in ten different languages.

In association with Pottermore’s retail partner Storytel, new audiobooks of the Hogwarts Library will be produced in ten different languages, including Brazilian Portuguese, Bulgarian, Danish, Dutch, Finnish, Korean, Polish, Russian, Swedish, and Turkish. And we should expect to be listening to these audiobooks between 2023 and 2024. While it’s wonderful to see that the Potter books are constantly being translated into different languages, most recently Yiddish, it’s even more wonderful to see that the supplemental material is also receiving translations. It seems the mission is to provide the Muggle world with as many opportunities for immersion into the wizarding world as possible, and we’re all for it.

And it looks like the world is most definitely capitalizing on these opportunities. Last month, Pottermore Publishing reported impressive revenue increases for a 12-month period ending in March 2021. The company saw revenue rise from £32.5m ($44.2m) to £40.4m ($52.3m), with a staggering 150% increase in pretax profits. Overall, Pottermore Publishing’s profitable year is likely the result of consumers’ need for entertainment during the COVID-19 quarantine, but the company is quick to attribute its success to the widespread availability of the Wizarding World books through its online retail partners, which includes Storytel alongside other partners like Amazon, Apple, Audible, and Google.

Similar to Audible, Storytel is a subscription-based online provider of e-books and audiobooks and has been a partner of Pottermore Publishing since 2016, distributing Wizarding World publications to readers outside of the United States.

Are you excited about the new audiobook languages? Which of the new languages will you be listening to? Will there be any significant changes made to the material through translation? Let us know in the comments.