The 2021–2022 US Quidditch (USQ) regional championships are over, which also means that Muggle quidditch teams are already qualified for USQ Cup.

The SWRC was held on February 19–20 in Lake Charles, Louisiana. It was divided into two divisions. In the collegiate division, five Muggle quidditch teams played against each other once in a round-robin format. After that, Texas Quidditch won against UTSA Club Quidditch with a final score of 205–90 and became the champions of the SWRC. It’s the second time Texas Quidditch won the title, with the first one in 2019. Both teams, along with SHSU Quidditch, qualified for the USQ Cup.

The club division had more teams. Six teams competed in pool play on Saturday, February 19, only. The top two teams, Texas Cavalry and Texas Hill Country Heat, competed against each other in the final game until Texas Cavalry won the championship with a final score of 175–100. 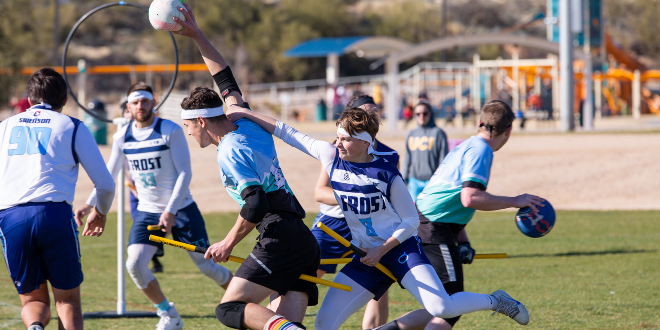 The West Regional Championship was held on February 26–27 in Oro Valley, Arizona. Like the other regional championship, this event also had both divisions with similar gameplay systems.

In the collegiate division, four teams played against each other once in a round-robin format. Cal Quidditch played against the University of California Los Angeles in the final game, and it won with a final score of 145–60. Cal Quidditch won the West Regional Championship for the second time; the first time was in 2018. Both teams qualified, along with Utah Collegiate Quidditch, for the USQ Cup.

The club division had nine teams and was played by pool play on Saturday, February 26. On Sunday, February 27, the top six teams followed into the bracket, while the bottom team from Pool A and the two bottom teams from Pool B had consolation play. The final game was played between Anteaters Forever and Seattle Quidditch Club. Anteaters Forever won with a final score of 165–80.