The Graphic Art of Fantastic Beasts: The Secrets of Dumbledore – A MinaLima Exhibit has opened at the House of MinaLima in London. The exhibit includes 12 new prints of designs created for Fantastic Beasts: The Secrets of Dumbledore by Miraphora Mina and Eduardo Lima – the dazzling duo who have been the graphic designers on every Wizarding World film to date.

At a press preview of the exhibit, the pair spoke about how each film presents new narratives and challenges, and Secrets of Dumbledore is no different. New locations offer opportunities for different graphic design styles and the creation of even more insignia of international magical ministries. Eduardo Lima was particularly excited to work on one for Brazil – his homeland. Mina and Lima also described all the research that goes into their work, from extensive reading on Bhutan to testing contemporary printing techniques to ensure their designs ring true to the time and place (even once magic is taken into account). 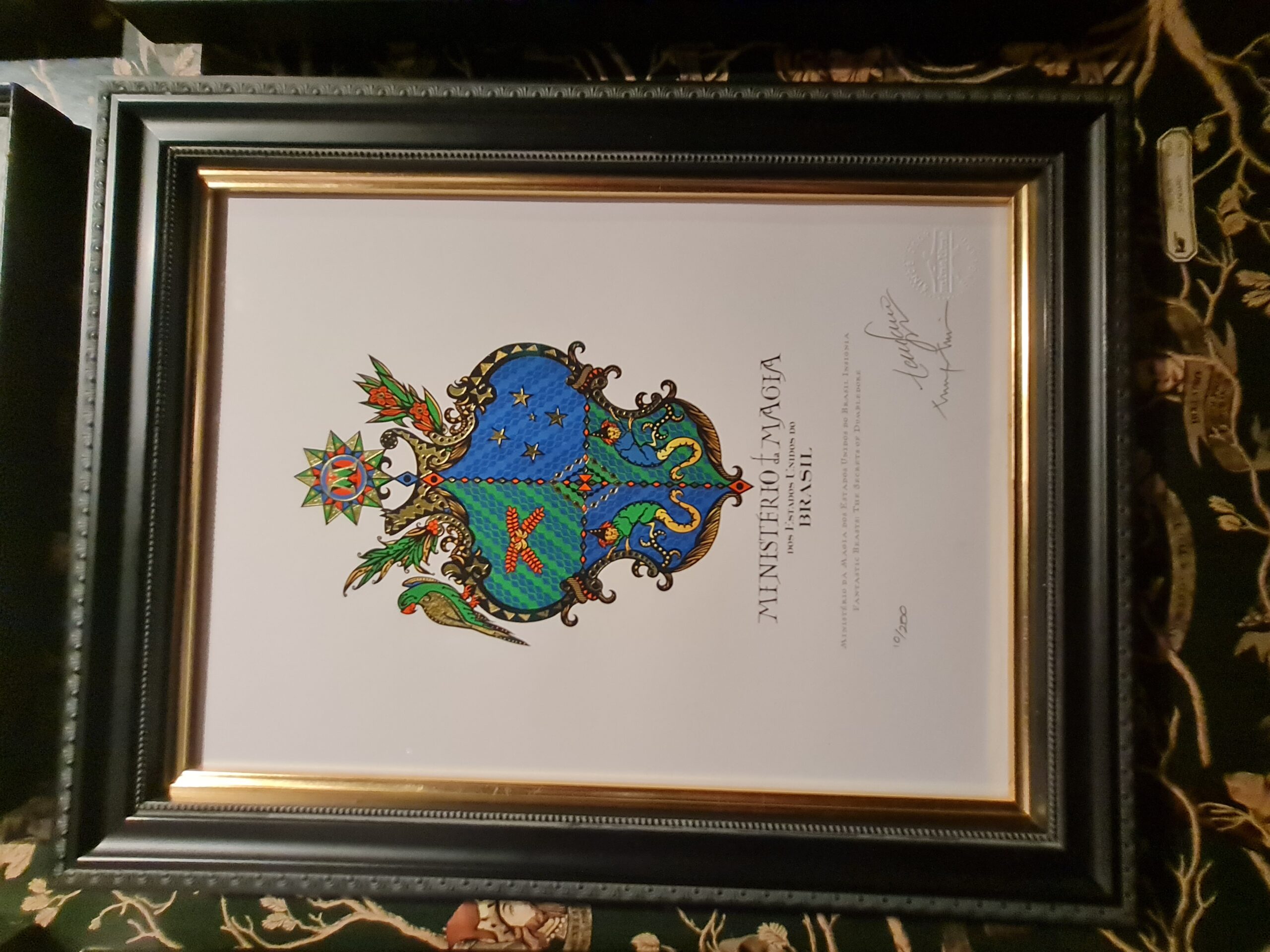 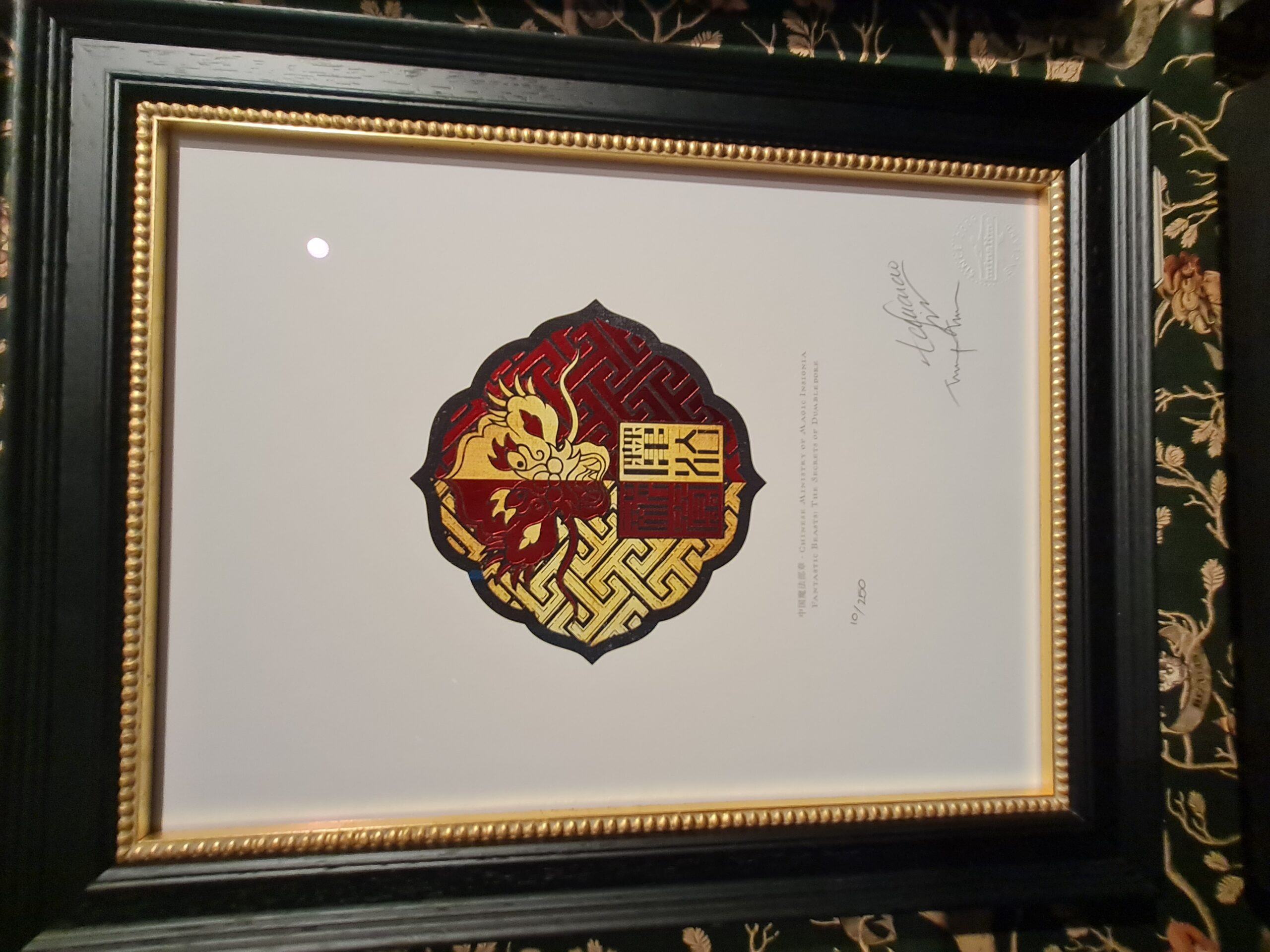 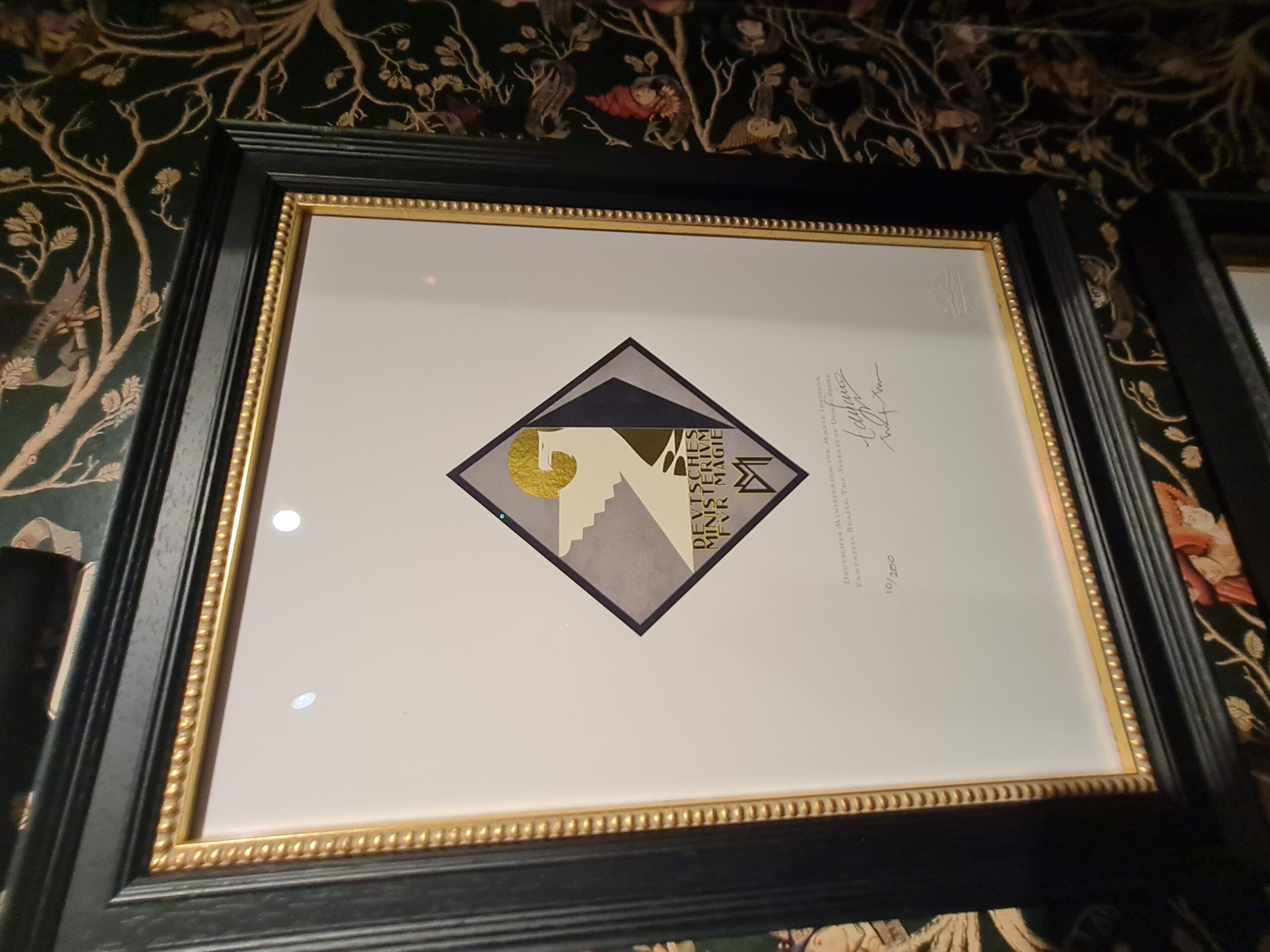 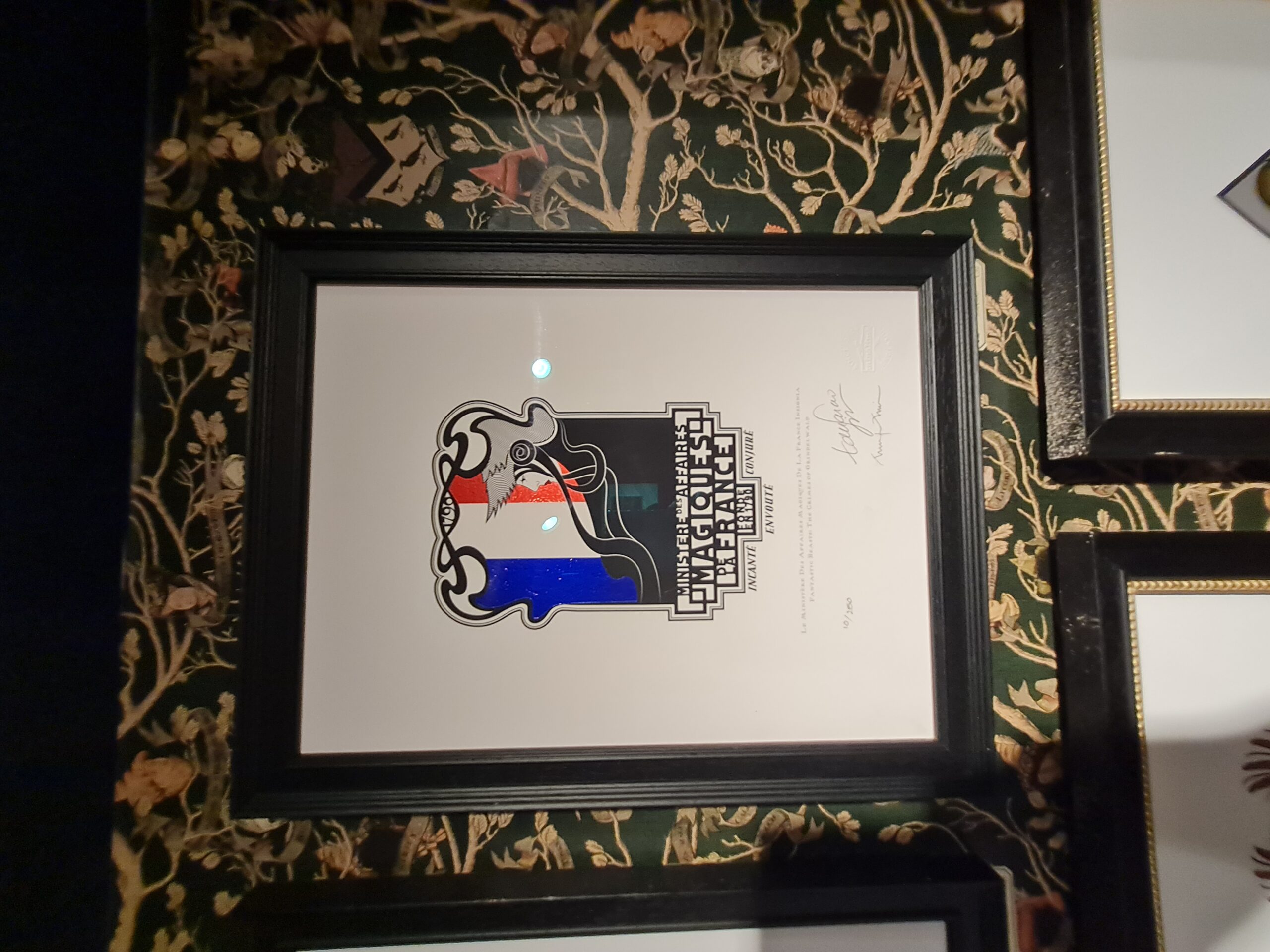 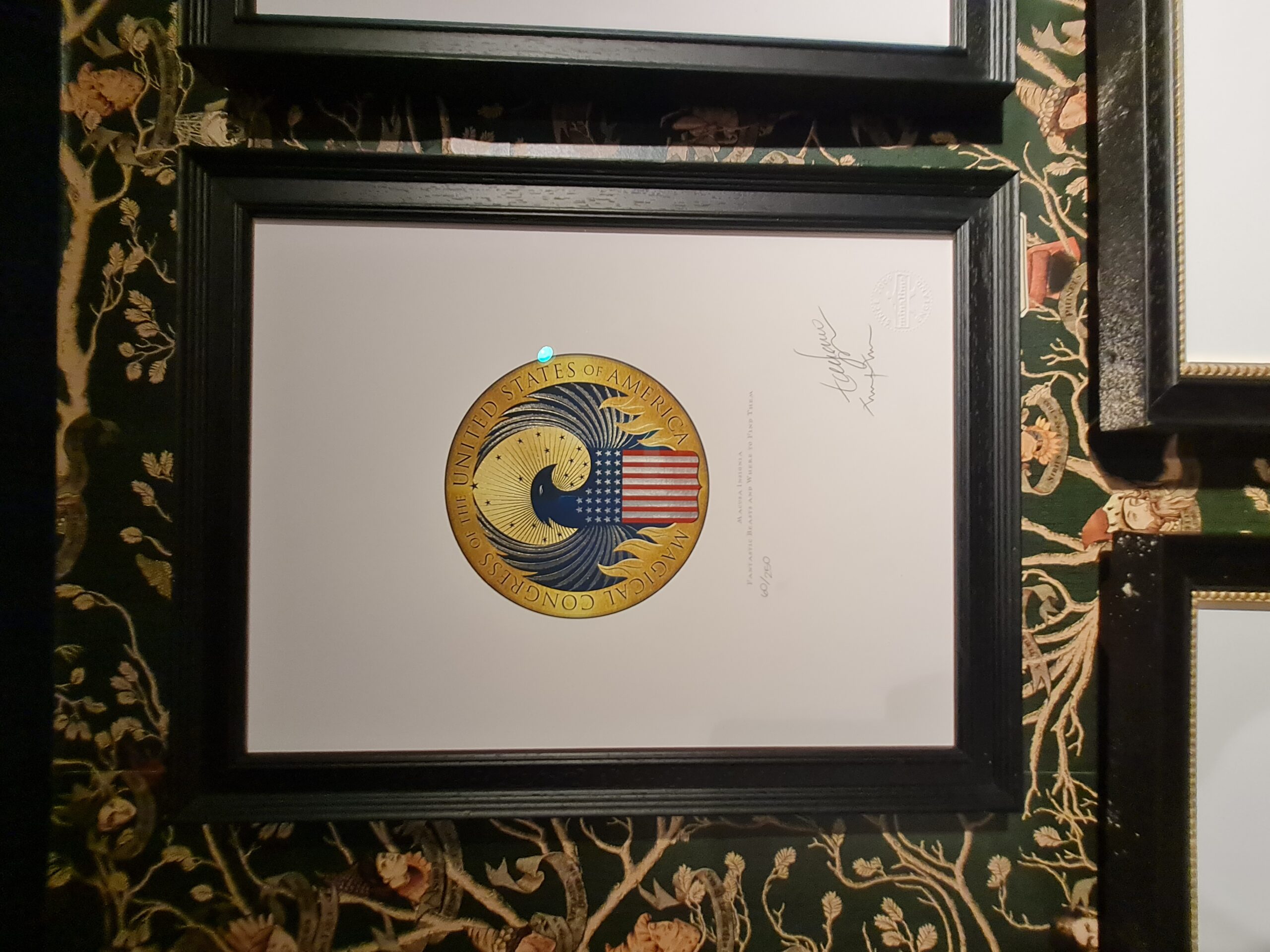 Magical Congress of the United States of America (MACUSA) insignia designed by MinaLima. 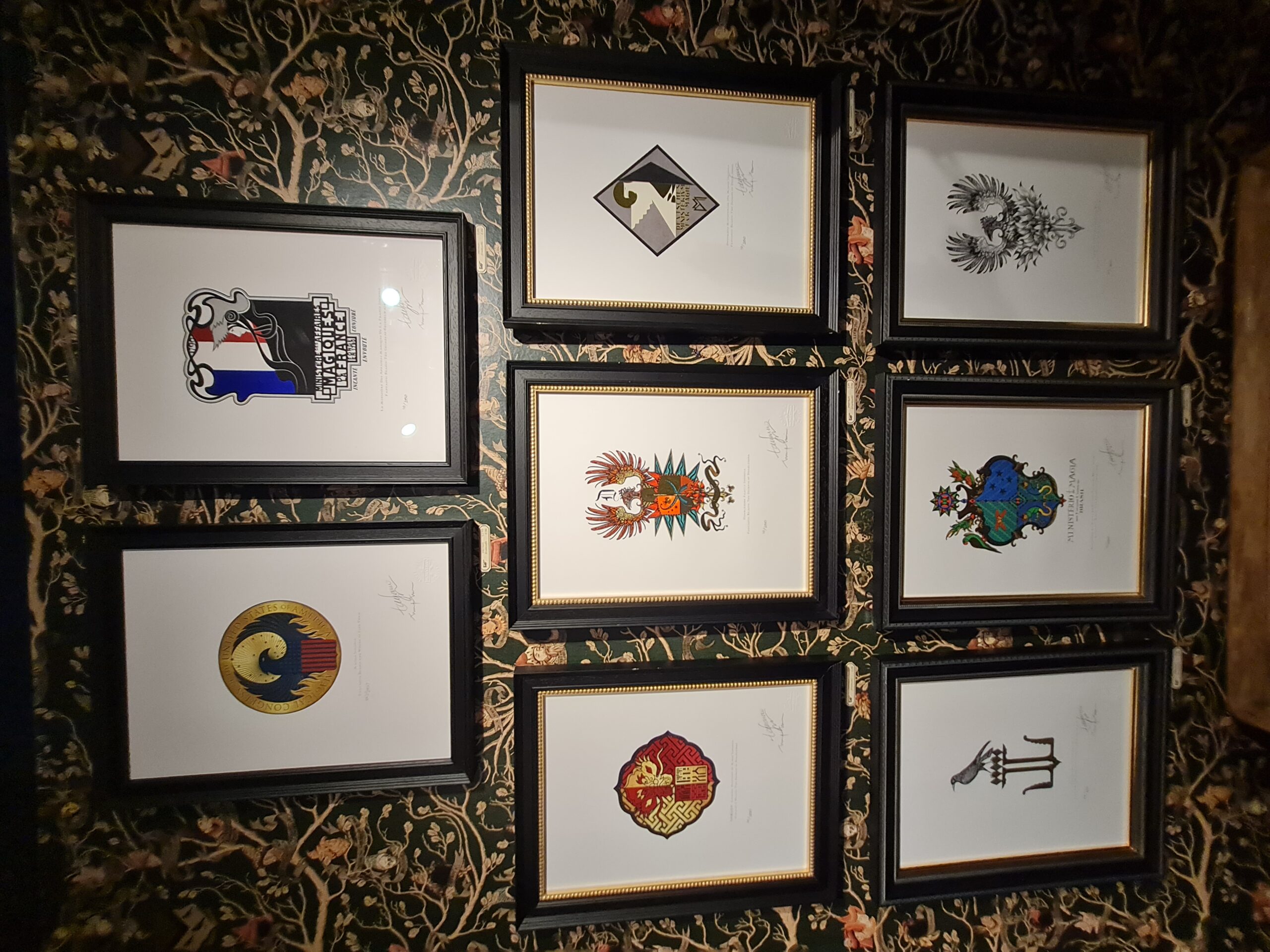 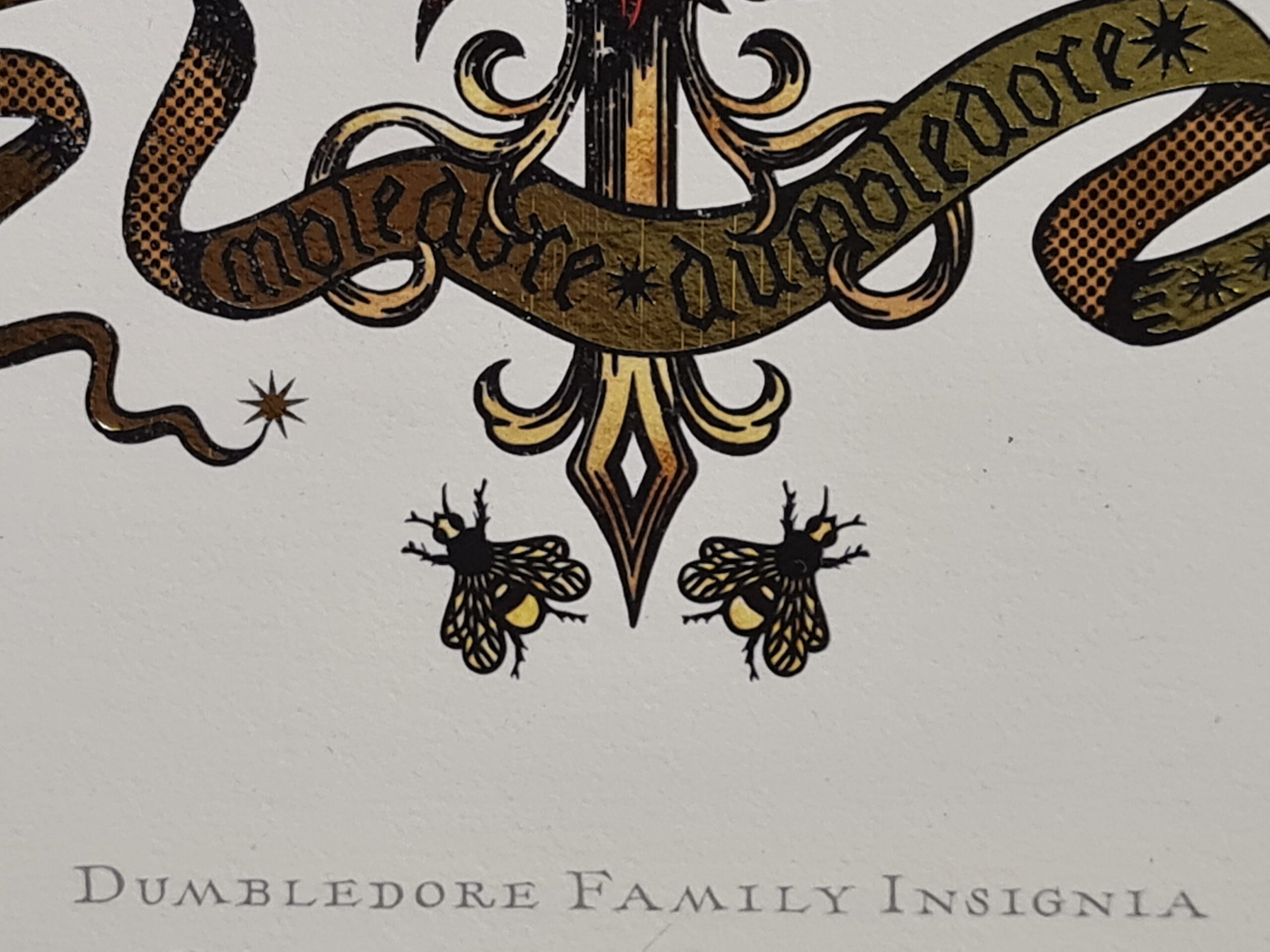 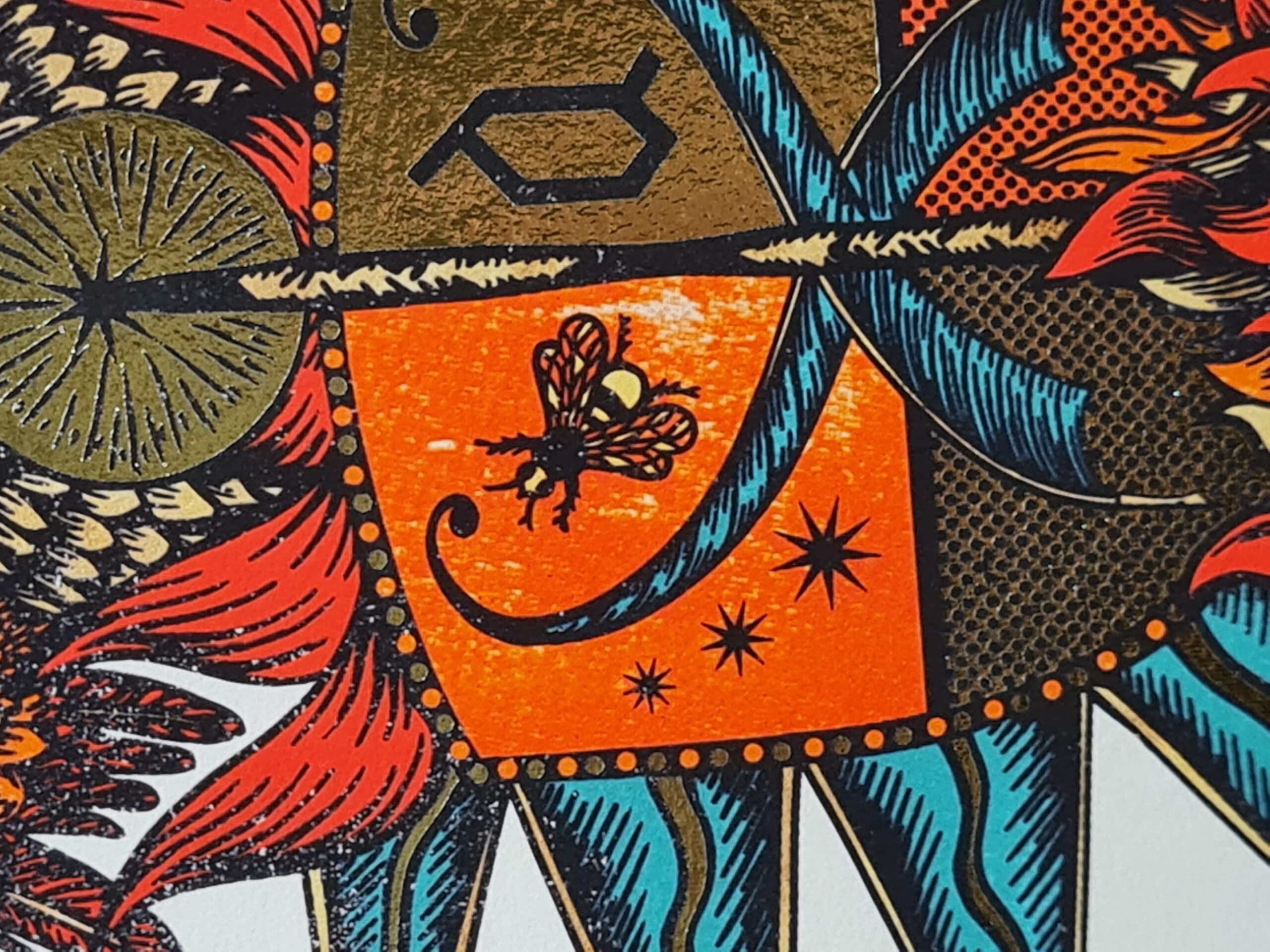 
It’s this kind of attention to detail that has made MinaLima’s work so beloved by Wizarding World fans. Nestled among the ministry emblems was the insignia of the Dumbledore family. Along with the not entirely unexpected phoenix, the design also featured bees! Those who have an interest in the many clever origins of names across both Harry Potter and Fantastic Beasts will remember that Dumbledore is an Old English word for “bumblebee.”

Mina talked about how special it is to feel that they’re inspiring people to become interested in graphic design and spoke about their relationship with fans:

We’re grateful still to be involved in trying to build this world. […] There’s a duty, if you like, a good duty, to keep delivering the language that [the fans] have all come to speak, and we’re also so grateful to have that dialogue with [the fans] because it started off as us working on films and people going and seeing them, and then slowly, slowly, because of the fantastic fanbase and the world that has grown from Harry Potter, it has become a proper conversation. 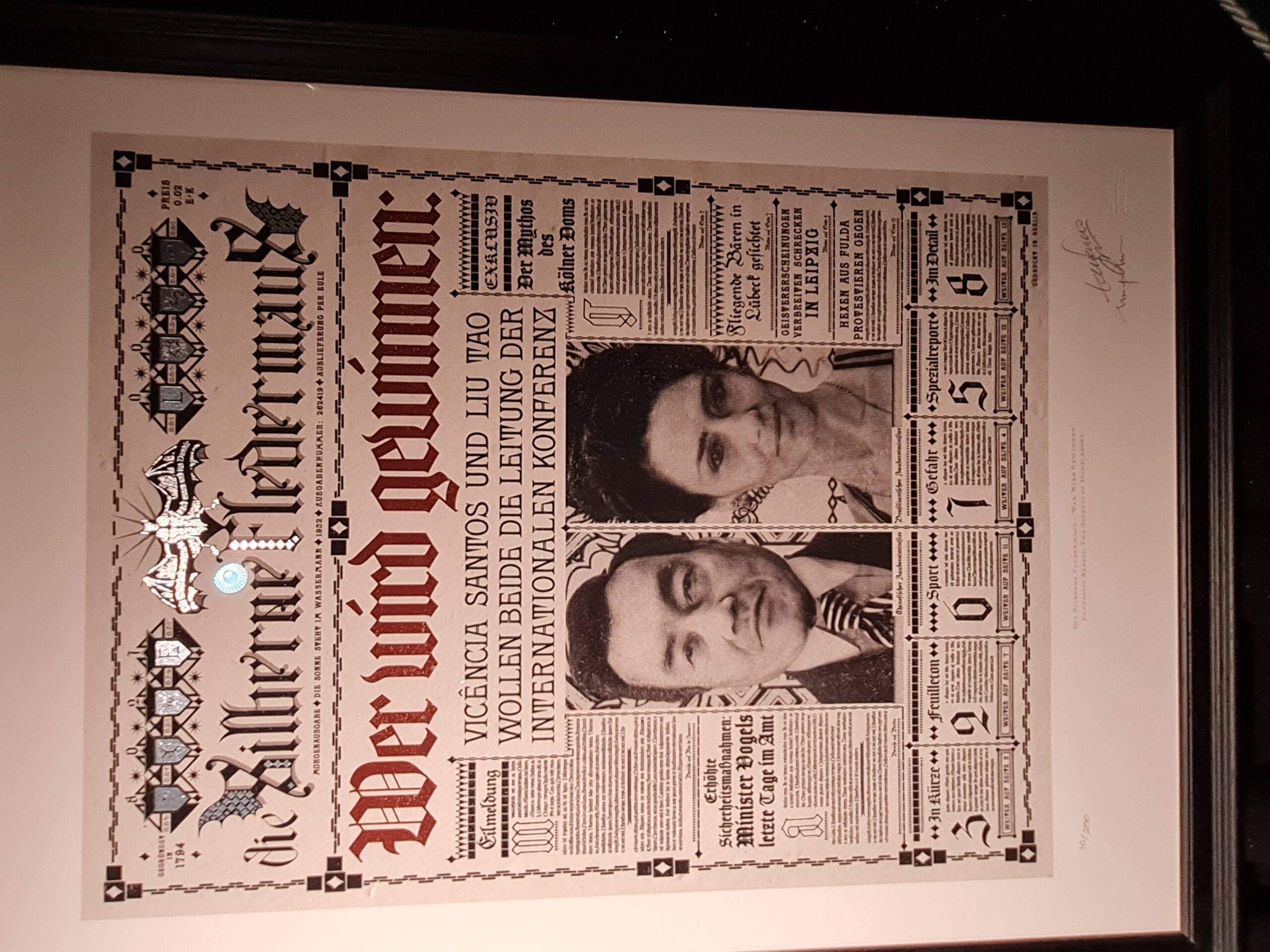 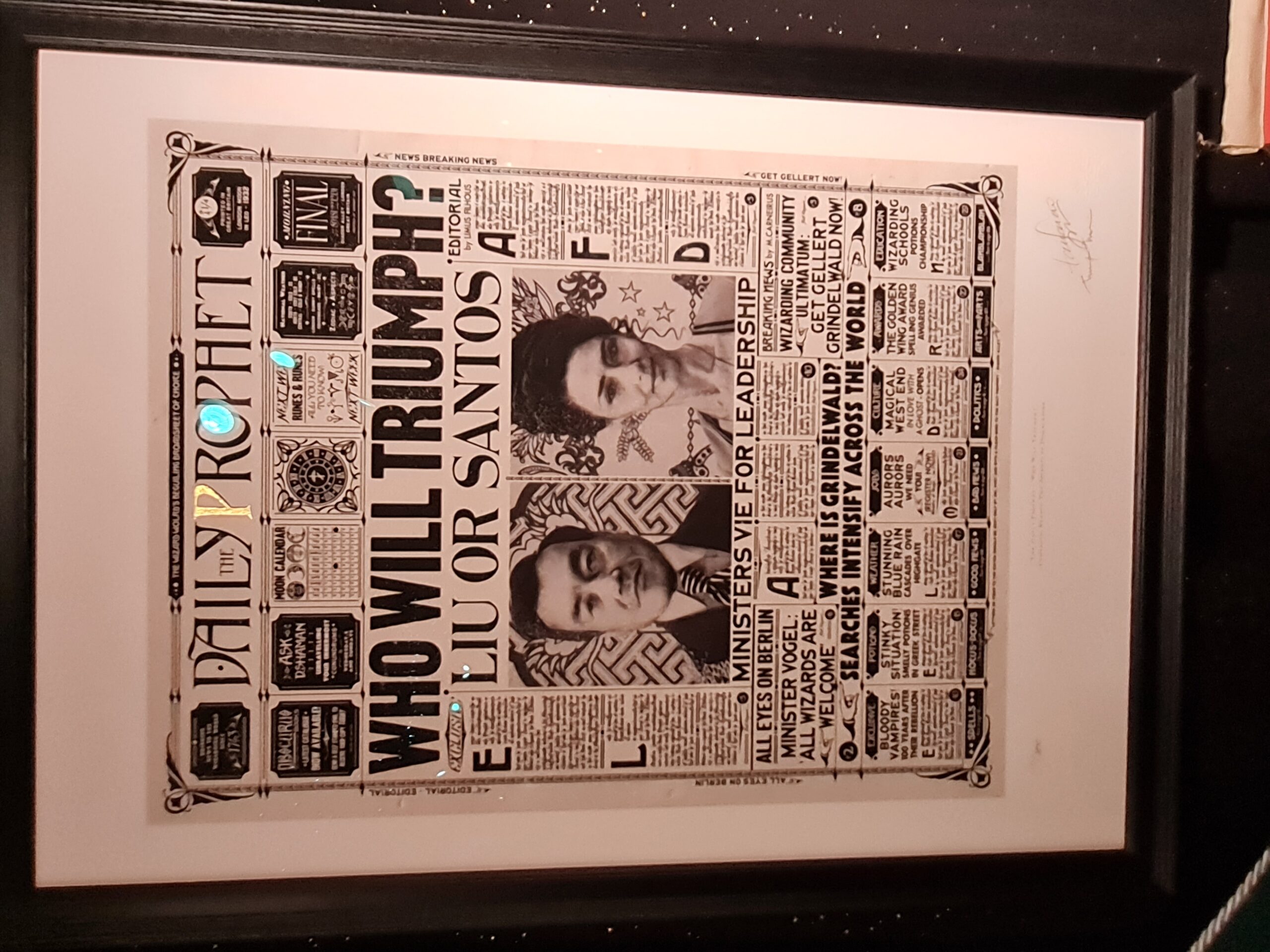 Front page of “The Daily Prophet” designed by MinaLima for “Fantastic Beasts: The Secrets of Dumbledore.” 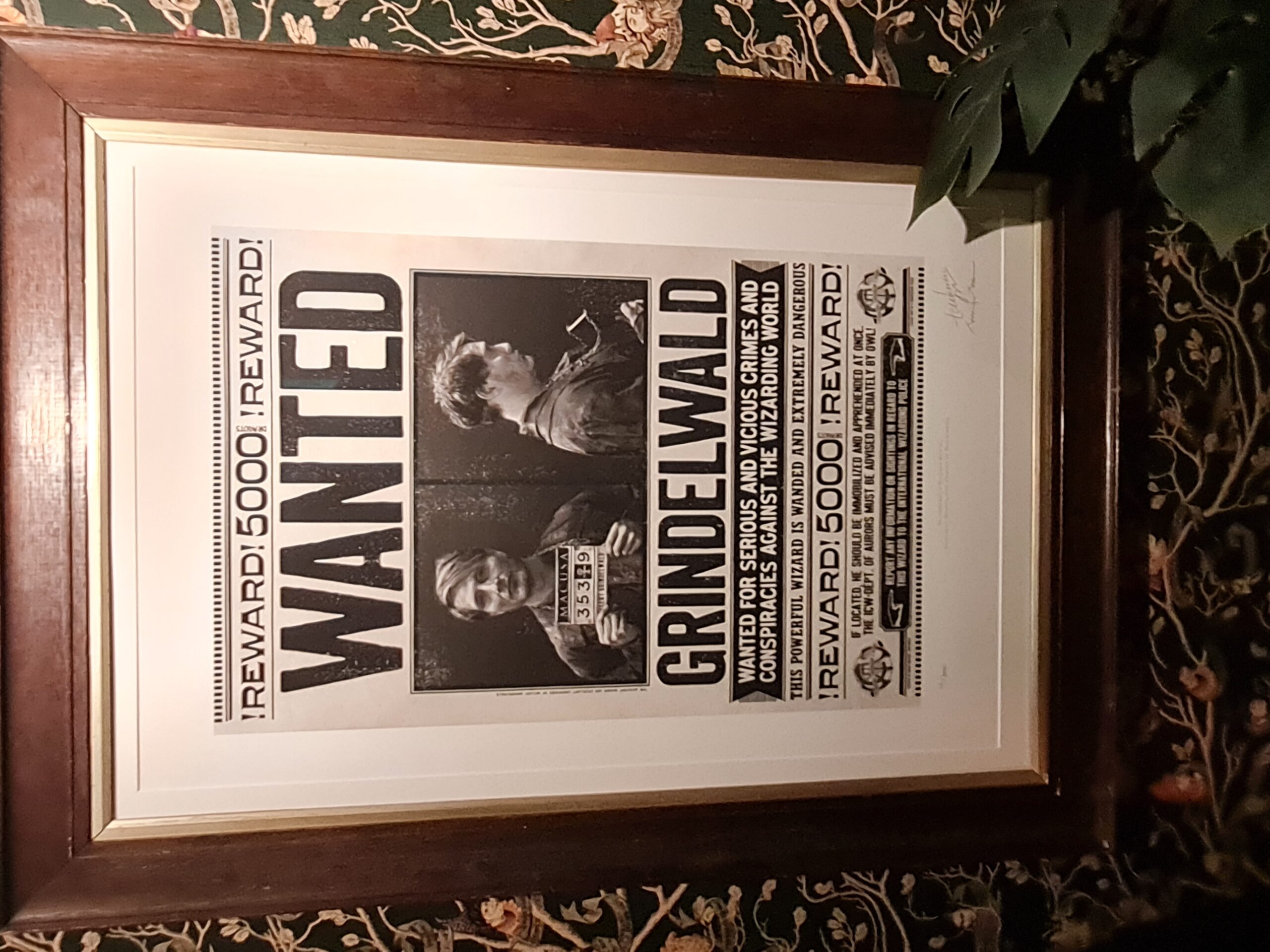 Wanted poster for Gellert Grindelwald as featured in “Fantastic Beasts: The Secrets of Dumbledore.” 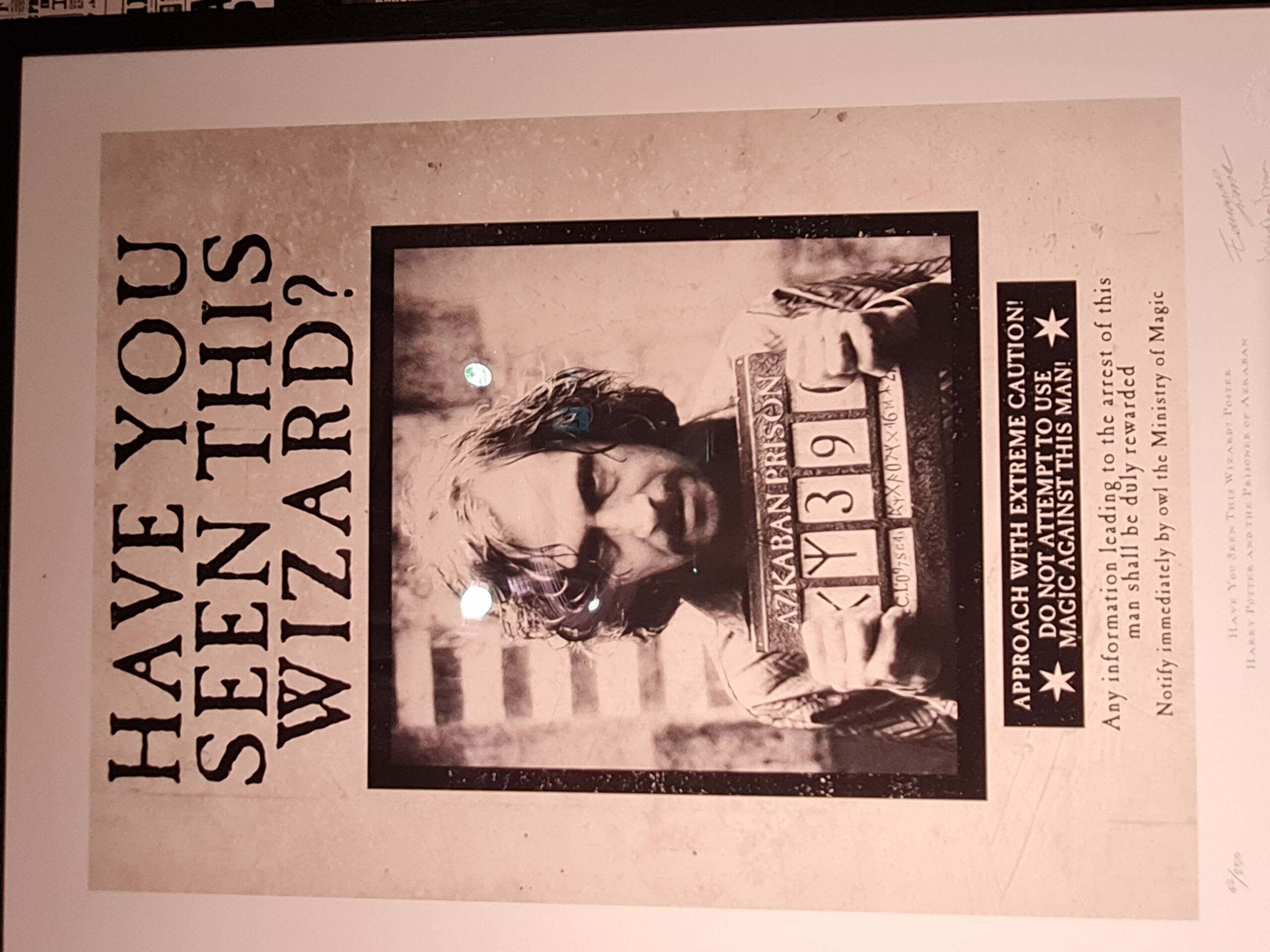 “Have You Seen This Wizard?” wanted poster for Sirius Black from “Harry Potter and the Prisoner of Azkaban.”


The iconic collection of newspapers and wanted poster designs created by MinaLima continues to be added to with the latest film bringing German wizarding newspaper Die Silberne Fledermaus (that’s The Silver Bat to non-German speakers) and a wanted poster for Gellert Grindelwald.

Elsewhere, MinaLima delved back into the Harry Potter series for inspiration when creating magical books for Professor Eulalie “Lally” Hicks, including Jinxes for the Jinxed (which first appeared in Harry Potter and the Order of the Phoenix) and Have a Fiesta in a Bottle by Libatius Borage (best known as the author of Advanced Potion-Making). There’s also now a second edition of Fantastic Beasts and Where to Find Them, bringing the number of different covers for that book in the films to three (excluding Newt Scamander’s original manuscript). But given that the book’s “About the Author” indicates there are at least 52 editions, there are plenty of opportunities for more covers. 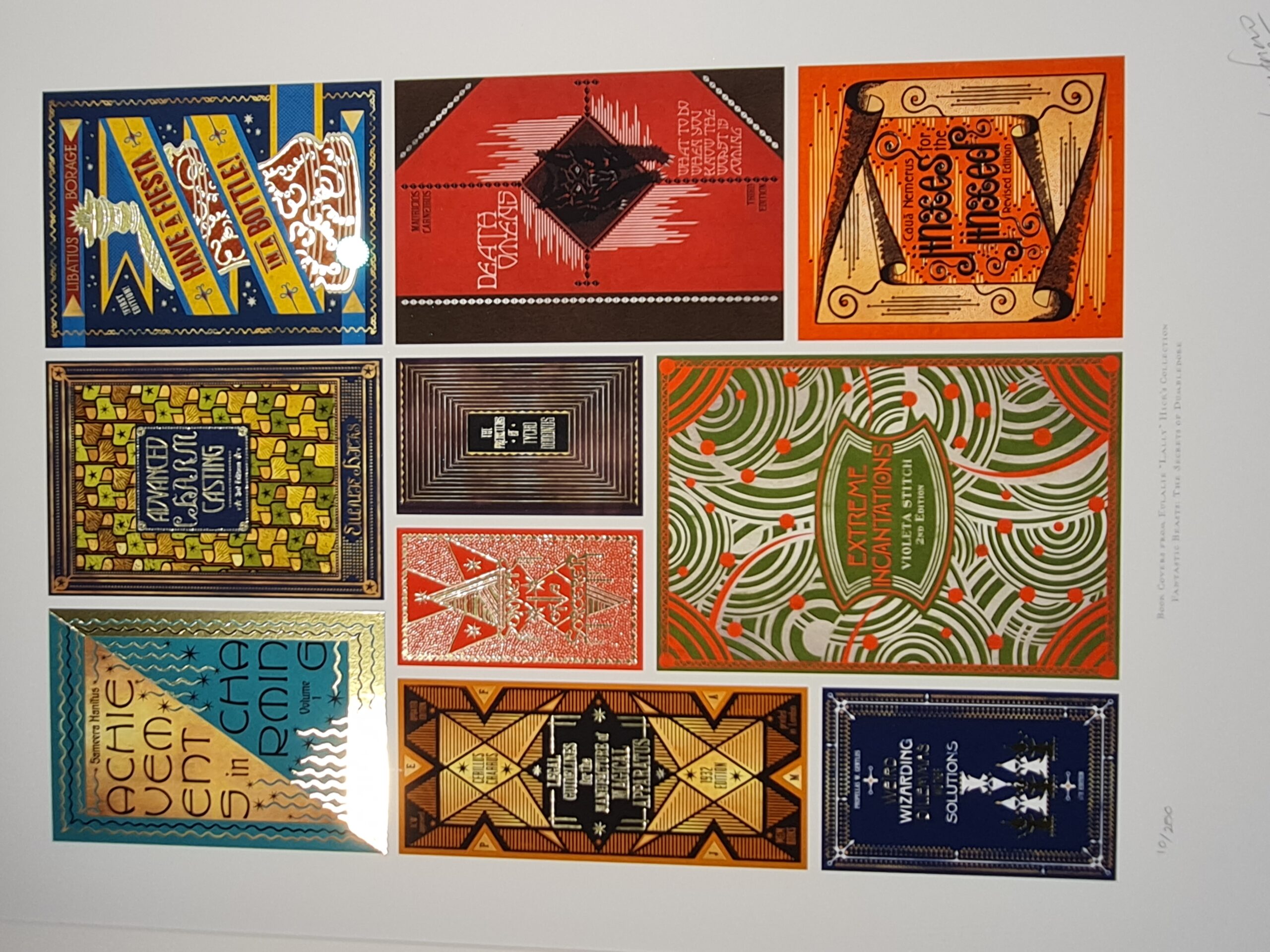 Covers of spellbooks owned by Professor Eulalie “Lally” Hicks designed by MinaLima for “Fantastic Beasts: The Secrets of Dumbledore.” 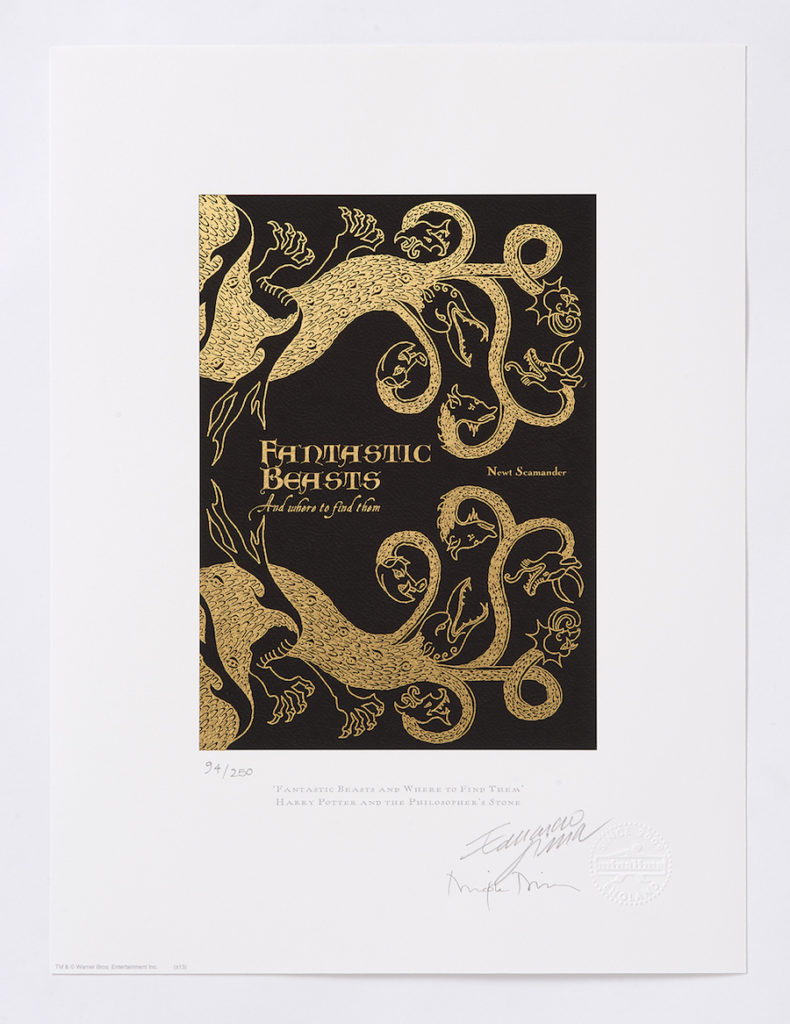 Original “Fantastic Beasts and Where to Find Them” cover designed by MinaLima for “Harry Potter.” 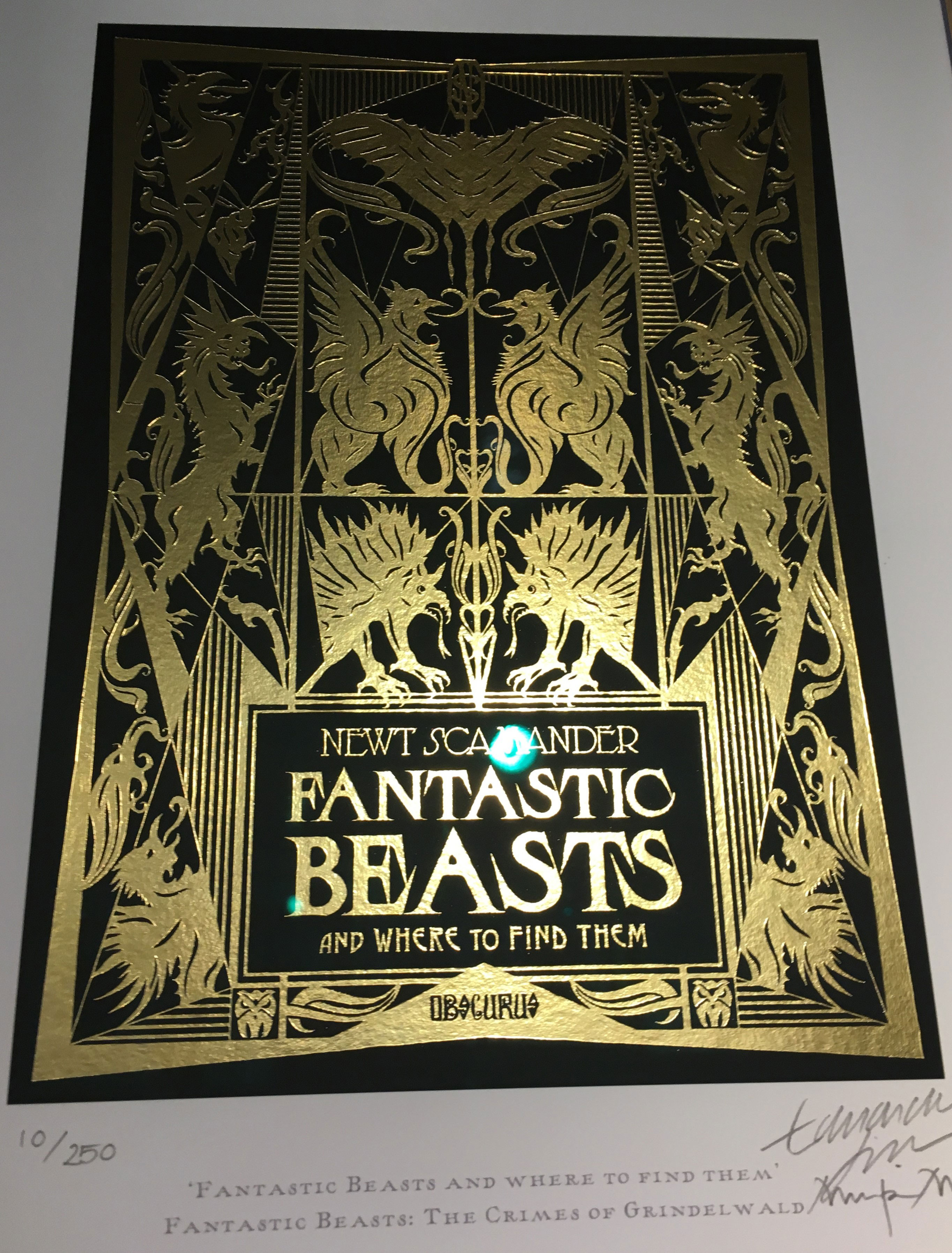 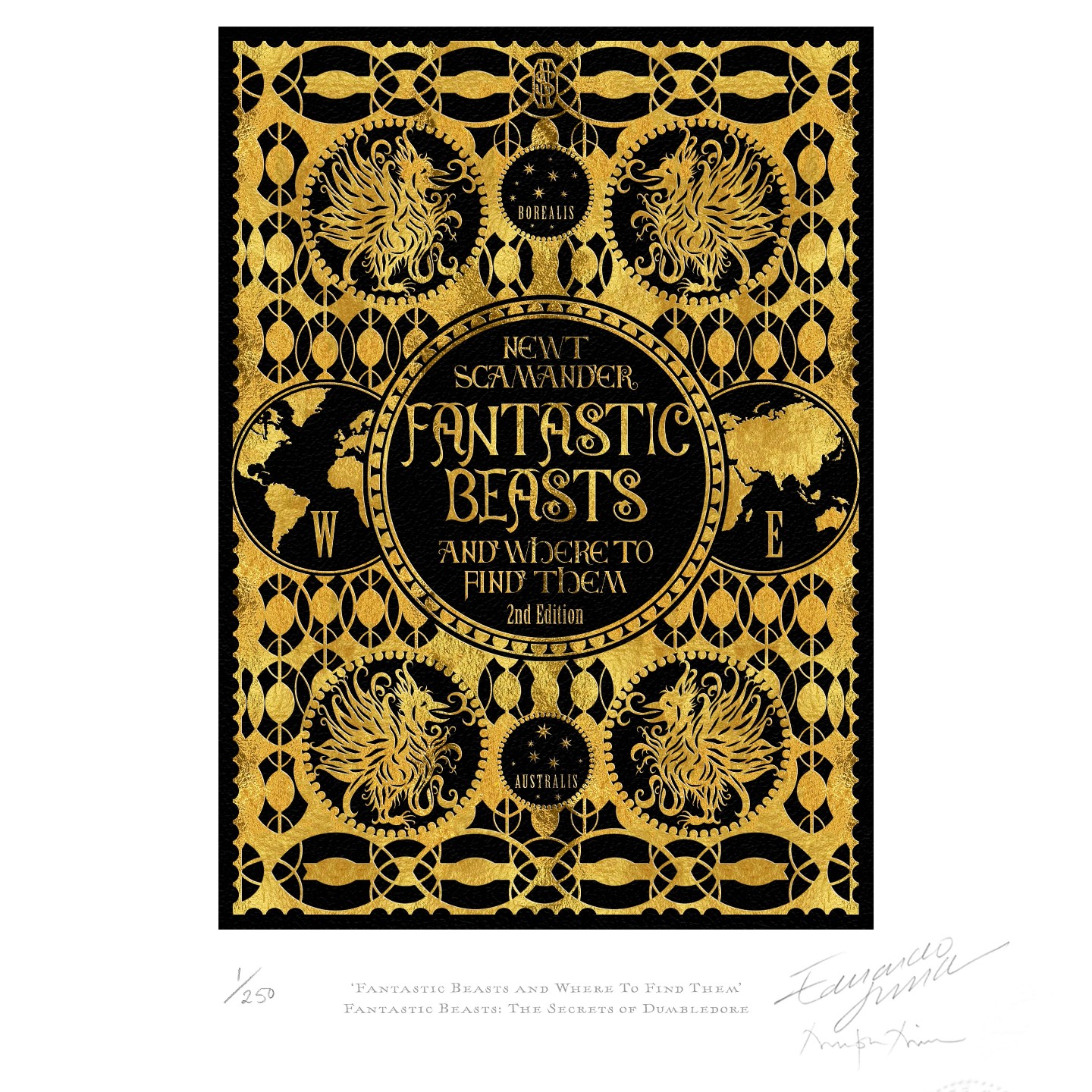 
Mina said that after such a long wait between their work in the production and watching the finished film, they’re “always panicking that [they] won’t see the things that [they’ve] done.” An example would be their Gellert Grindelwald emblem which skillfully incorporated the Deathly Hallows symbol as described by Viktor Krum and featured heavily in the merchandise for Crimes of Grindelwald only to not appear in the film. But if the Secrets of Dumbledore trailers are to be believed, it will now finally get its chance on the big screen.

House of MinaLima has now opened locations in New York, USA; Osaka, Japan; and most recently, Paju, South Korea; and they’re hoping the expansion won’t stop there. These locations will all exhibit Graphic Art of Fantastic Beasts – a curated collection of designs from the series – from April 8, 2022.