As the release date of Fantastic Beasts: The Secrets of Dumbledore draws closer, MinaLima, the award-winning design studio that has worked across the Harry Potter films as well as the first two Fantastic Beasts films, will debut new art prints commemorating the anticipated arrival of the next chapter. 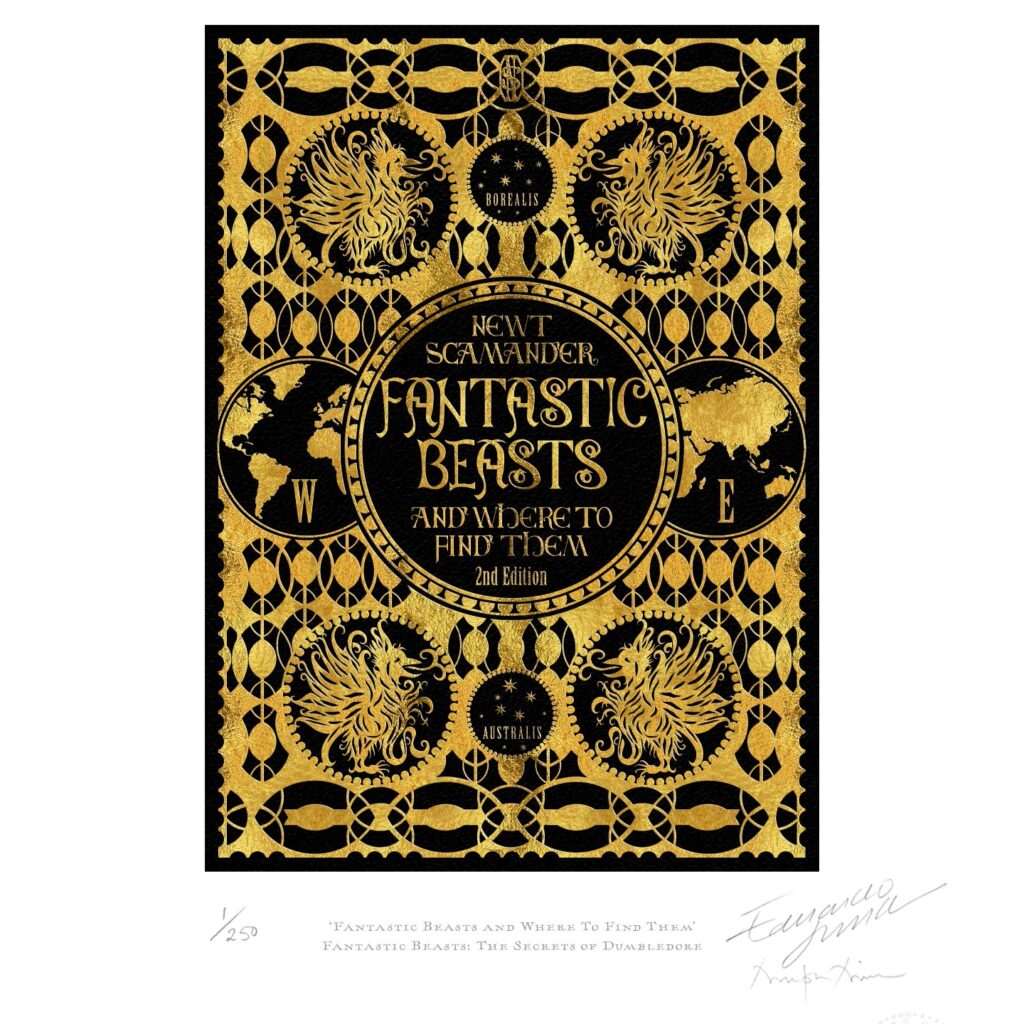 “Fantastic Beasts and Where to Find Them” mock-up by MinaLima

You can view the latest art on Tuesday, March 29, at the House of MinaLima in Soho, London. This magical collection will feature the international magical cultures of Fantastic Beasts. This new wizarding world artistry collection has colorful and nostalgic designs featuring Gellert Grindelwald’s wanted posters, the Ministry of Magic in Germany, German wizarding newspaper Die Silberne Fledermaus (which translates to “the silver bat”), the Dumbledore family emblem, and a magical train known as the Great Wizarding Express.

Our excitement for the new film continues to grow, and there’s even more to be revealed by MinaLima. There is a standout piece that has been created with the film production that exhibits the Magisterial Chamber of Ancient Wizardry – the highest seat of the wizarding world – in Bhutan. 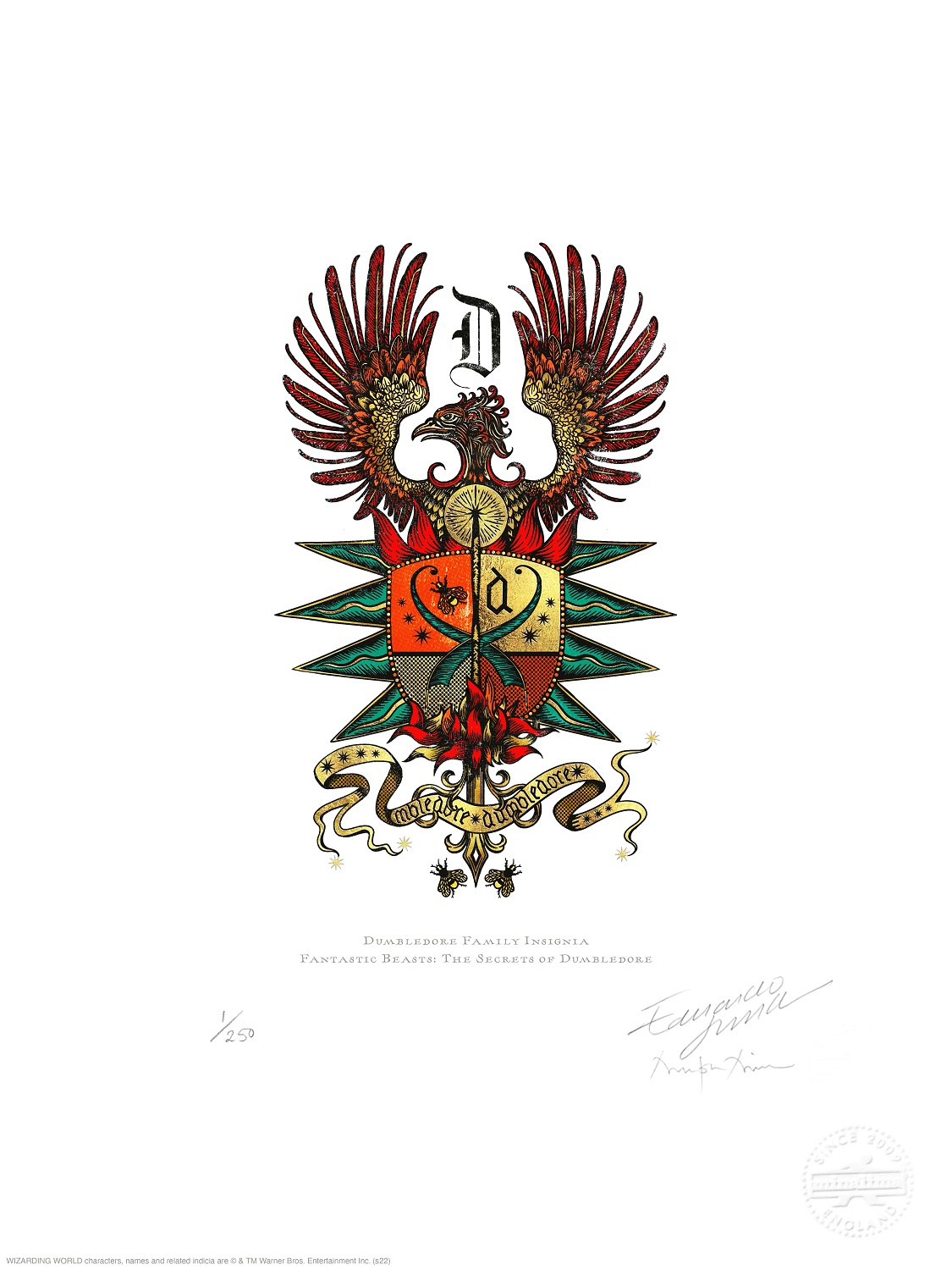 This fantastic collection of artwork will be on display at the House of MinaLima in Soho on March 29. The specially curated Graphic Art of Fantastic Beasts will also be on exhibit at House of MinaLima New York, Osaka, and Paju beginning Friday, April 8.

In about a month, Fantastic Beasts: The Secrets of Dumbledore will be released, and maybe we’ll have some answers about the greatest sorcerer in the world. Until then, these immaculate art pieces will have to get us through.

Will you be visiting House of MinaLima to view it all in person? If you can’t make it, follow MinaLima’s social media channels and keep an eye on the official site for more details.

Studio MinaLima unveils a new collection of graphic art prints from Fantastic Beasts: The Secrets of Dumbledore at House of MinaLima in London

Continuing from the Parisian Art Nouveau aesthetic of the previous Fantastic Beasts film, this movie presented MinaLima with the opportunity to manifest a distinct Art Deco style, capturing the artistic movement of its time. Much historical research and experimentation with techniques was employed, from sourcing original patterns and papers to scanning historical typefaces and peculiar surfaces to capture and reconstruct the essence and style of the period.

Wizarding World fans will travel the world and experience several other magical cultures through the vividly coloured artwork created by MinaLima. An integral part of the film’s visual storytelling is the celebration of international magical realms through the creation of very distinct identities for the Ministry of Magic in Germany, as well as pivotal characters from Brazil and China. These insignias will be presented to fans as limited-edition prints at House of MinaLima.

A visual highlight is the invention – in close collaboration with the wider film production team – of the Magisterial Chamber of Ancient Wizardry, a hideaway of the highest seat of the magical world in Bhutan. Fans will be able to pore over the symbols and motifs invented by MinaLima, with an aesthetic that references a typical Himalayan decorative vernacular.

Prints on display at House of MinaLima include the highly anticipated emblem of the Dumbledore family, featuring the majestic phoenix, the vibrant collection of 10 wizarding books created for Professor Lally, and the gilded front cover of the second edition of Newt Scamander’s best-selling book Fantastic Beasts and Where to Find Them. Also on exhibit – and available for purchase – are prints featuring graphics created for the first magical train, [t]he Great Wizarding Express, seen in the Fantastic Beasts series; a brand-new German newspaper, Die Silberne Fledermaus; and the first-ever Wanted poster for arch-villain Gellert Grindelwald.