Alison Sudol, the actress who plays the lovable Queenie Goldstein in the Fantastic Beasts films, recently spoke about her experience on the set of Fantastic Beasts: The Secrets of Dumbledore in the midst of the COVID-19 pandemic, digging deeper into Queenie’s character, and doing so while pregnant. HELLO! recently shared this interview with Sudol and her thoughts on where Queenie might be heading. At the end of Fantastic Beasts: The Crimes of Grindelwald, we watch Queenie ally herself with Grindelwald and separate from Jacob, and it left a lot of us feeling conflicted.

The journey that I got to go on with her really took turns that I certainly didn’t expect. I don’t think the audience expected it either. And you don’t really know what she’s going to choose, where she’s gonna go until the very end, and I think that that’s more interesting, and it’s more human, and it makes her more of a layered person, and that’s always more fun.

Not only did this test her skills as an actress since she describes looking at her character as “a multilayered person who has good and bad in them,” but she is also conscious of the growth Queenie takes on. 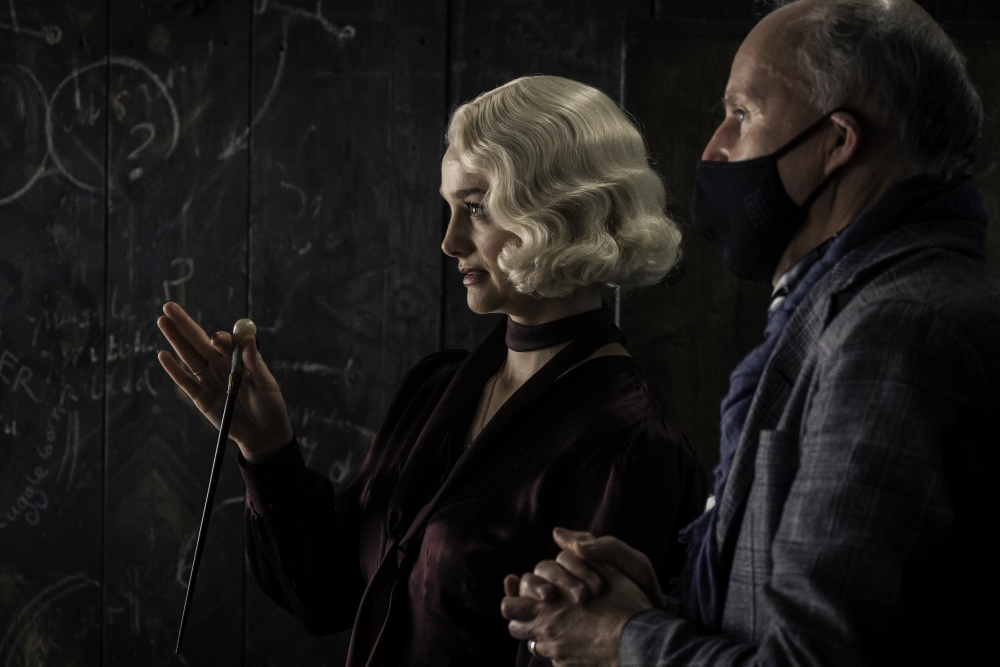 Director David Yates is shown beside Alison Sudol (Queenie Goldstein) on the set of “Fantastic Beasts: The Secrets of Dumbledore.”

Sudol shared that getting to return to the Wizarding World and be with people she cared about was extremely important to her mental well-being as well as the other castmates during the heightened pandemic time.

It was such a heavy time, and there was such a reduction of socialization as for being able to, like, see other people, and I was pregnant all throughout the film, and Victoria Yeates [Bunty Broadacre, Newt’s assistant] was also pregnant on the film and because we weren’t able to do any classes or any kind of in-person stuff throughout our pregnancy [sic].

Sudol is excited to see Queenie go from a girl to a woman in the Fantastic Beasts films and learn to truly own her power. She wants Queenie to use her gift for herself, for others who don’t want to manipulate her, and possibly in battle.

That’s something we can get behind – Queenie being both a lover and a fighter. What do you hope to see as character development from Queenie in the upcoming films?