Welcome to this week’s edition of MuggleNet’s Casting News! After last week’s Downton Abbey and The Menu teasers, we’ve got a new trailer for Colin Farrell’s After Yang plus more clips featuring Frank Dillane and Helena Bonham Carter! Castium Revelio!

First up, though, Sir Kenneth Branagh (Gilderoy Lockhart) has been learning a new skill. He was awarded the Freedom of Stratford-Upon-Avon title alongside Dame Judi Dench (Belfast) for their services to William Shakespeare. As part of the ceremony, the pair showed off their sheep-wrangling skills, which, according to Branagh, were "not so good." They also unveiled a newly restored statue of playwright David Garrick. 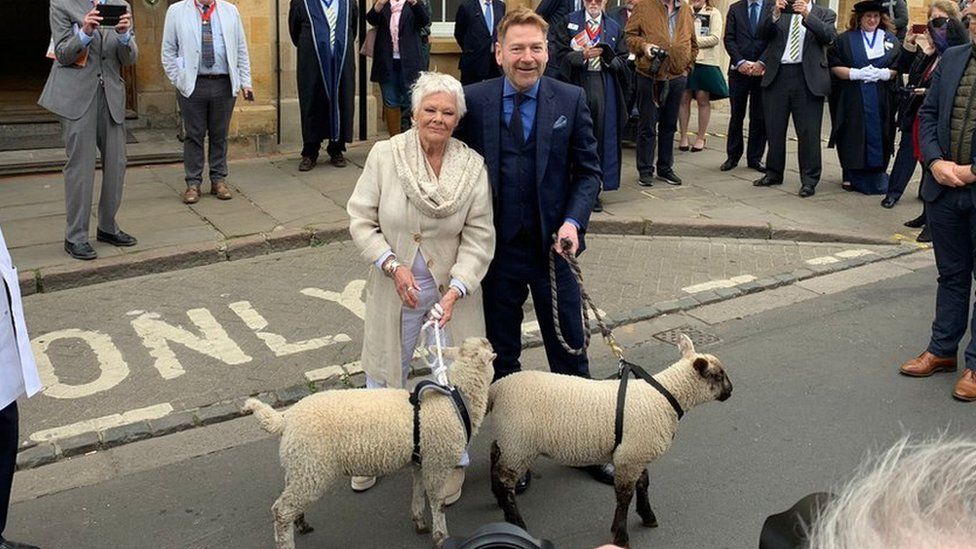 We've got exciting news about Harry Melling (Dudley Dursley) next. His film, Please Baby Please, has been picked up by UK-based distributors Blue Finch Films. The company purchased worldwide rights, although North America is excluded. The film is a musical thriller set in the 1950s about a couple who finds themselves being stalked by a local greaser gang after they witness a murder. Will you be hoping to watch the film?

We've got the first of many trailers for you now. Frank Dillane (16-year-old Tom Riddle, Harry Potter and the Half-Blood Prince) and Clémence Poésy (Fleur Delacour) are both featured in Apple TV+'s The Essex Serpent, which centers around a woman's search for a mystical sea serpent that goes wrong when tragedy strikes the town in which the serpent resides. The first trailer, which you can check out below, was released earlier this week.

Dame Emma Thompson (Professor Trelawney) and Isabella Laughland's (Leanne) Good Luck to You, Leo Grande will be featured at the Sundance Film Festival: London in June. The film, which previously debuted at the main Sundance Film Festival, will open the festivities, with Thompson attending the showing. We showed you the first UK trailer last week and will continue to update you when more information and trailers are released.

Our next clip is a first look at the cast of the Sondheim concert in rehearsal. Helena Bonham Carter and Imelda Staunton (Bellatrix Lestrange and Dolores Umbridge, respectively) have both been named as leading members of the show, which will occur at the Sondheim Theatre in London next week. The concert will celebrate the life works of legendary composer Stephen Sondheim.

We've got a new project starring Ralph Fiennes (Lord Voldemort) to share with you next. The Return is a modern retelling of Odysseus's return home after the Trojan War. After 20 years away, Odysseus returns to his kingdom to find that his wife is being forced to choose a new husband and her suitors are threatening to kill his son. Will you be watching this new take on the classic tale?

We've got two clips from the upcoming comedy-drama Ten Percent to show you next. The show is based on the French comedy Call My Agent. One clip features a teary Helena Bonham Carter, mourning the loss of Jim Broadbent's (Horace Slughorn) character, Richard Nightingale, while the other stars Kelly Macdonald (the Gray Lady) taking part in a stressful and confusing interview. Check out both below and tell us which one you prefer!

Next up, we have an interview with Dan Fogler (Jacob Kowalski) about his role in The Offer. He's taking on the role of legendary director Francis Ford Coppola in the show, which is about the creation of the Godfather trilogy. In the interview, he discusses which scenes were his favorites to film, how much he's learned about Coppola's production struggles, and the possibility of a part two. You can watch Fogler talk about the project alongside his fellow cast members in full below.

Last but certainly not least, we have another trailer to show you. This time, it's for Colin Farrell's (Percival Graves) sci-fi drama After Yang. The film follows a disjointed family trying to reconnect after their A.I. helper unexpectedly malfunctions. Farrell's character, Jake, searches for a way to fix him but realizes how distanced he is from the rest of his family. You can watch the trailer below!

That’s a wrap on this week’s Casting News! Which of our trailers, clips, and teasers did you enjoy the most? Let us know in the comments below!