Fantastic Beasts: The Secrets of Dumbledore is by no means a perfect movie. It suffers from the biggest problem to plague every Wizarding World film: a complex storyline that belongs in a book rather than a movie. The main plot is fuzzy upon closer inspection, and unnecessary side plots abound. Nevertheless, Secrets of Dumbledore overcomes these drawbacks by delivering an immersive, magical film full of epic battles, adorable creatures, and Harry Potter lore. Most importantly, it signals a return to the main trajectory of the Fantastic Beasts films, an enjoyable step in the right direction after Fantastic Beasts: The Crimes of Grindelwald.

But the best things about the film far outshine its mistakes. Secrets of Dumbledore recalls the unique whimsy and charm of the Chris Columbus Harry Potter films, and throughout its 2½-hour runtime, the film brings fun and magic in six key ways.

1. The Antics of Pickett the Bowtruckle and Teddy the Niffler

The two creatures play a central role in Theseus Scamander’s escape from prison, which involves some clever lockpicking and some scrambling around for gold coins, and in the film’s finale, Pickett helps Newt Scamander hold onto Queenie Goldstein’s wedding ring prior to her marriage to Jacob Kowalski. Pickett and Teddy bring a great deal of humor to the film, offering light and levity beyond the focus on the cutthroat world of wizarding elections. Other magical creatures join in on the fun too, with Newt persuading Theseus to join him in dance to fend off what appears to be an army of Skrewts, and the film starts with a Diricawl wrapping an unconscious Newt in its tail and carrying him to safety. 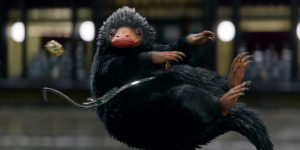 The relationship between Albus Dumbledore and Aberforth Dumbledore is strengthened, as we see more of Aberforth than ever before. Though their relationship isn’t exactly warm, themes of brotherly love prevail as their two spells meet midair to defend their relative, Credence, from Grindelwald’s attacks. It is clearly love magic; just like Lily Potter’s love for Harry was so strong that it saved Harry from Voldemort’s killing curse, Albus and Aberforth’s love is so strong that not only does it save Credence, but it also destroys the blood troth, setting up the franchise for a Grindeldore showdown. 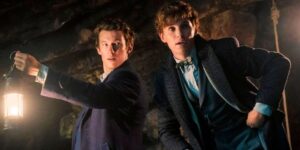 3. The Friendship Between Jacob and Eulalie

Perhaps the newest and most charming relationship is that of Professor Eulalie Hicks and Jacob. She convinces the reluctant Jacob to join the fight once again, and she takes on a mentorship role as the two team up in battle and participate in witty banter. As the story expands and Newt, Tina, and Queenie travel all across the world, Jacob and Professor Hicks form a friendship that further strengthens his connection to the wizarding world we all know and love. It becomes clear with Secrets of Dumbledore that Jacob is no longer a visiting Muggle, but that he is truly part of the magical world.

Of course, the relationship between Jacob and Queenie isn’t forgotten either. When Queenie sees Grindelwald kill the baby qilin, she realizes she’s made a huge mistake and gotten in too deep. Jacob rescues her at the election, even facing the Cruciatus Curse, and the two of them are married in Jacob’s bakery by the end of the film. This ending came as a great relief for fans who feared for Queenie and Jacob’s relationship after the events of Crimes of Grindelwald, and it also beautifully framed the significance of the battle against the Muggle-hating Grindelwald by showing a marriage between a fan-favorite wizard-Muggle couple.

This film saw a strong departure from the style of previous duels in the Harry Potter film series; no more are the battles centered around the two participants, their wands locked together by a bright magical thread. That style of battle is replaced by quick, wordless swipes of the wand with blasts that remind the viewer more of a swordfight or even a lightsaber fight than the duel between Harry and Voldemort.

Battle at the Bhutan election

More than just exciting, the battles are also clever. In the German Ministry of Magic, Professor Hicks takes control of Jacob, manipulating his arms to make it appear as though he is using magic, and at the end of the battle, the pair make their escape by climbing a bridge over the chaos, conjured out paper and other debris. At the election, Grindelwald’s henchmen attack our protagonists, each of whom is holding duplicates of Newt’s case — one of which is filled with Bludgers. When the case is opened, the Bludgers explode out, smashing property and people while a Quidditch theme plays.

Jacob Kowalski and Eulalie Hicks battle at the German Ministry

Overall, the film was a wonderful experience. When watching it, the mistakes were obvious (looking at you, Minerva McGonagall!), but the successes were even more so. Despite its failures, the film was a home run with the only job it really had: being a hugely enjoyable experience for any Harry Potter fan.