“Secrets of Dumbledore” and “The Book of Beasts”: Fantastic Bestiaries and Where to Find Them – Part 1

When Obscurus Books brought out Newt Scamander’s Fantastic Beasts and Where to Find Them in 2001, it became (as far as I am aware) the first bestiary to be published in the twenty-first century. With it, J.K. Rowling joined a highly select crew of modern writers who have attempted to revive what is more usually thought of as a medieval format. When the original bestiaries were written, accounts of mythical beasts (such as phoenixes and unicorns and trees sprouting barnacle geese) rubbed shoulders with lions and bears because all of these animals were believed to be real. To publish a modern bestiary is to be engaged in quite a different enterprise. Medieval bestiarists were trying to discover something about the mind of the creator through studying the wonders of his creation. Modern bestiary authors, by contrast, are trying to discover something about the human mind by considering what kind of creatures have been invented across time and place. Rowling has recently made this point explicitly, saying that the invention of similar fantastical beasts across different cultures “fascinates me because that’s clearly telling us about ourselves…about what it is to be human and what lives at the back of our minds, in our subconscious.”

This series of three blogs to mark the release of the third Fantastic Beasts film looks at three different bestiaries, which stretch across three millennia and three continents. All three have, I believe, influenced Rowling’s own fantastic beasts and may be able to give us hints about what is to come. The first is T.H. White’s Book of Beasts (1954) (a translation of a medieval Latin bestiary); the second is the Shan Hai Jing (a Chinese bestiary composed c. fourth-century B.C.E), and the third is The Book of Imaginary Beings (1957), written by Jorge Luis Borges, with Margarita Guerrero. 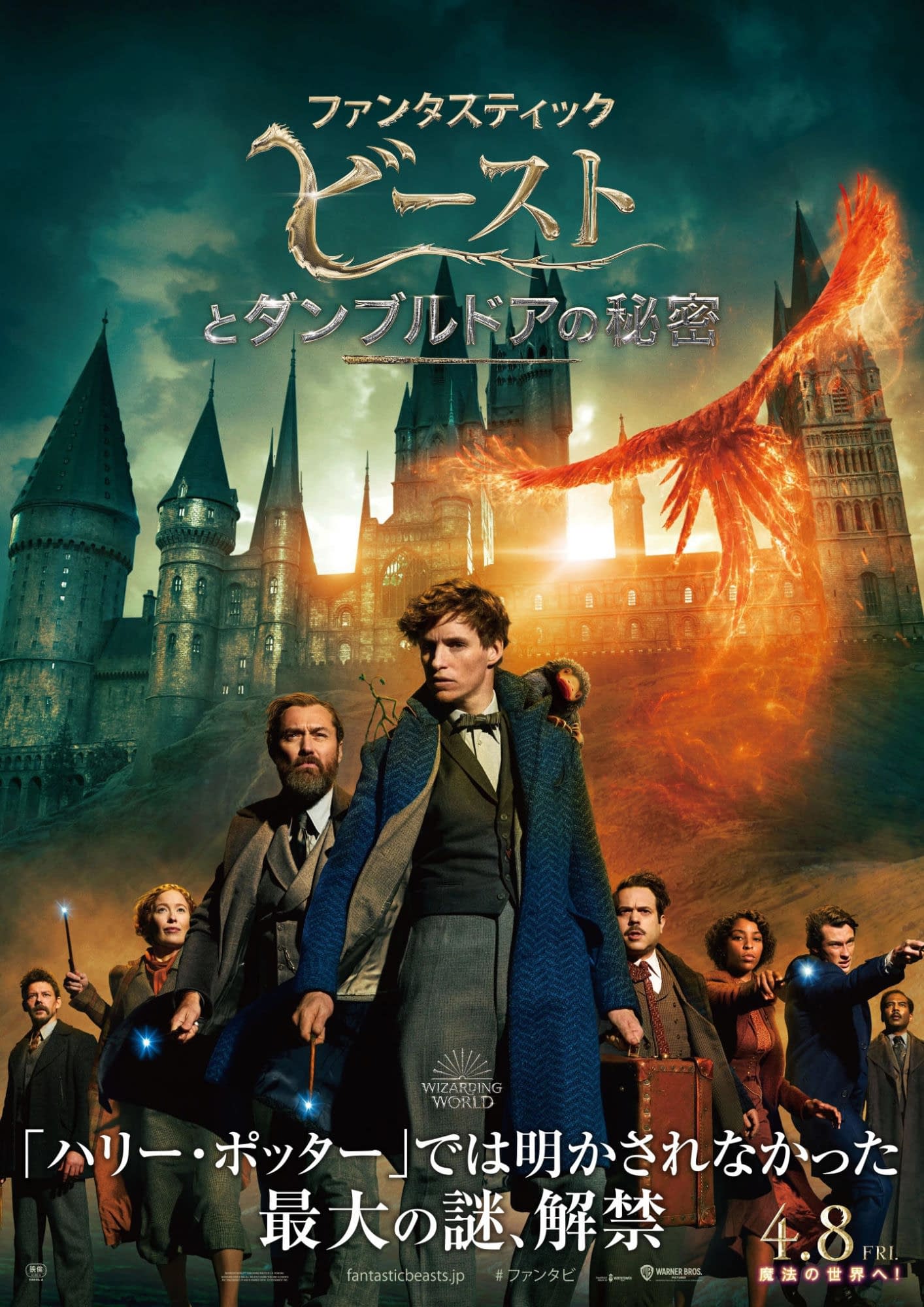 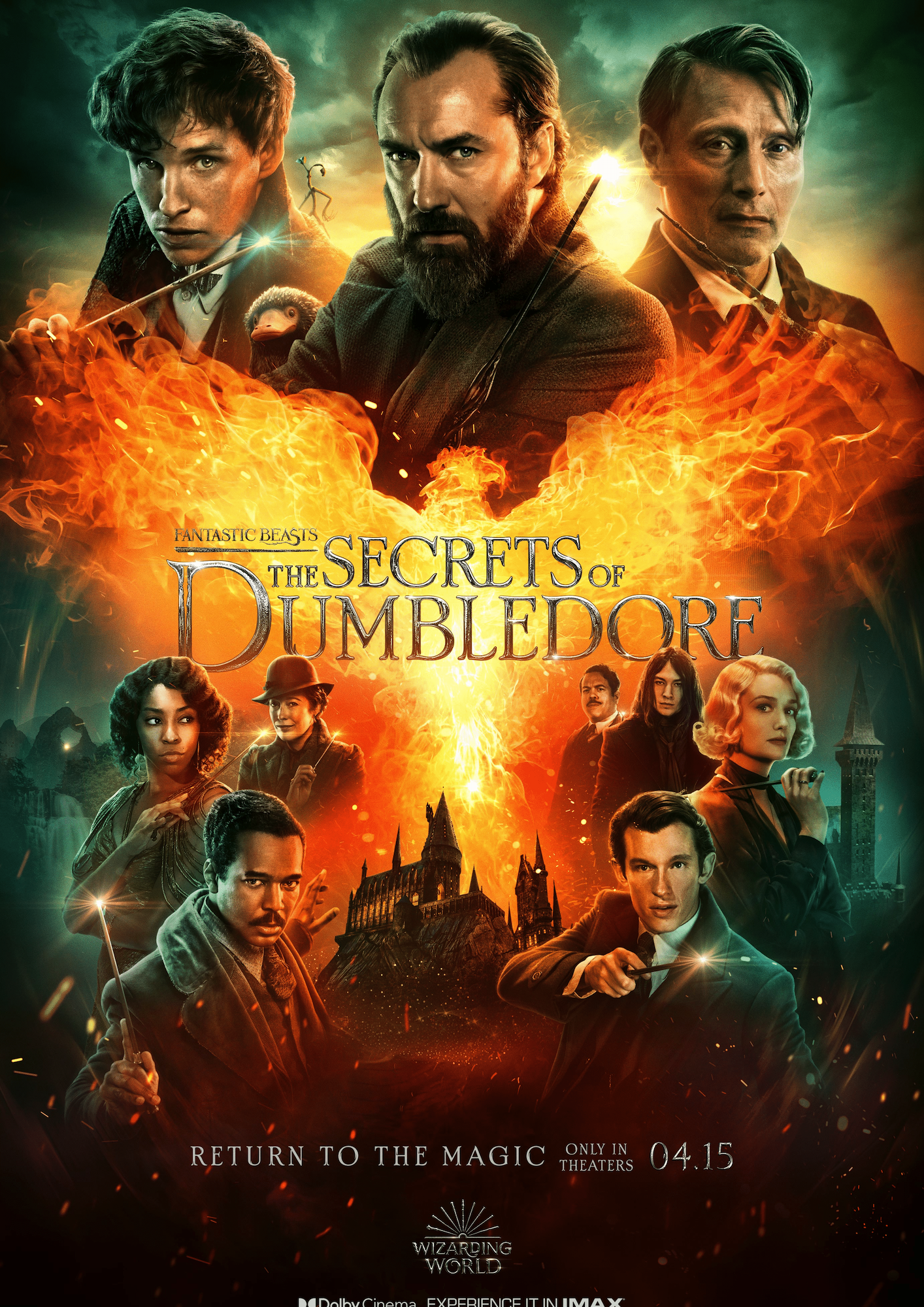 The Secrets of Dumbledore Poster

Judging by what we have seen from the Fantastic Beasts: The Secrets of Dumbledore trailers so far, beasts are getting less important as the franchise progresses – although, this may be to some extent the optics of marketing (which is concentrating on human interest and Harry Potter connections). Japanese marketing, for example, has been emphasizing the beasts much more – placing Newt in the center of the main poster and creating an entirely beasts-based advert. Indeed, while the stylized dragon embedded in the word “beasts” has become a tiny residual in the lettering on English-language posters, it remains emphasized on Japanese posters. But even in the English-language trailers, we still have Pickett the Bowtruckle, Teddy the Niffler, and (probably) Fawkes the Phoenix taking starring roles. We’ve also seen manticores, qilin, Diricawls, and an unknown and extremely strong expanding/contracting bird with rainbow feathers. Whatever their importance dramatically, moreover, it remains the case that the beasts provide the moral center of the films, embodied as they are in the purity of the figure of Newt – who has chosen the animal shortening of his name (over the more traditional ‘Newton’) and is the light to Grindelwald’s dark. 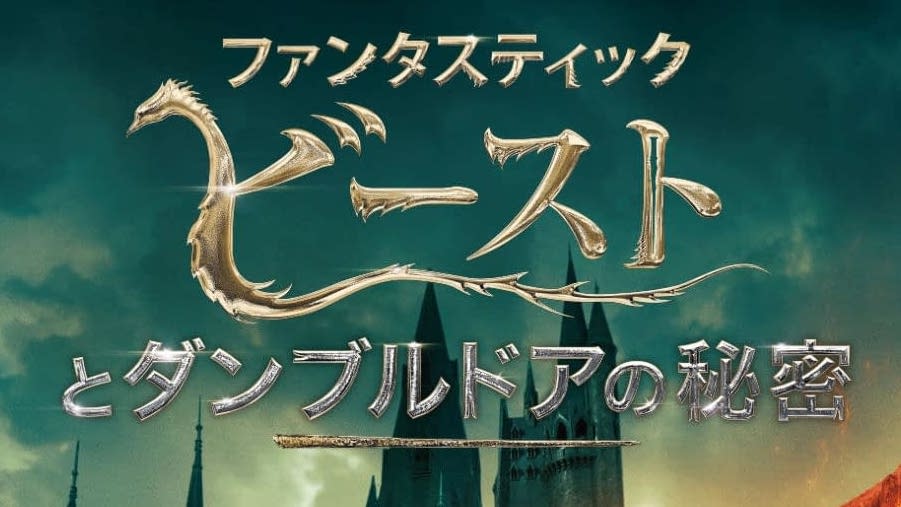 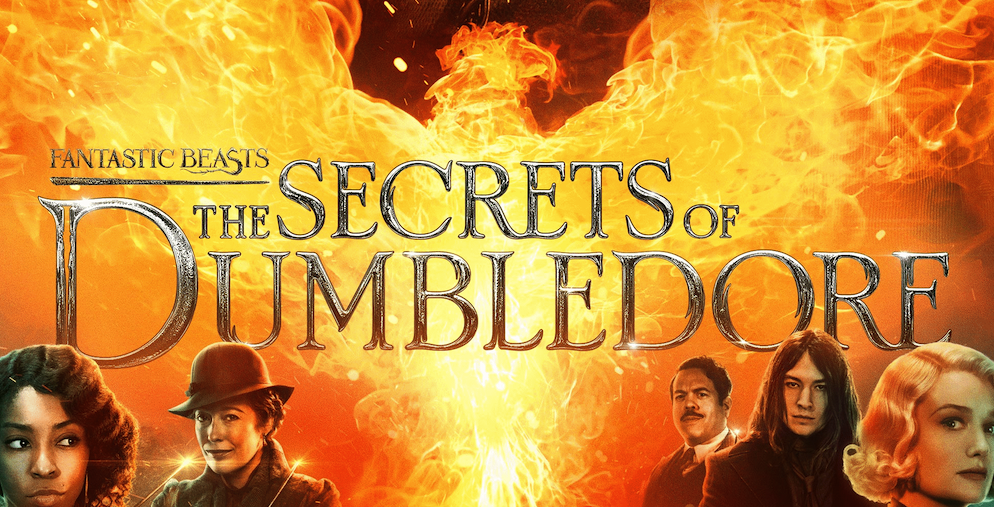 The Secrets of Dumbledore title

This series of blogs on these fantastic bestiaries will consider what these sources might reveal to us about the animal lore in Harry Potter and make a few other predictions for Secrets of Dumbledore along the way. It will end with the two traditional mythical beasts who look to play the most important roles in Secrets of Dumbledore: the qilin and the phoenix.

One of the few novels which Harry Potter’s author has explicitly acknowledged as a source is T.H. White’s The Once and Future King (1958). Rowling has drawn attention to the way in which White’s intertwining of school story and myth has influenced Harry Potter by calling White’s hero Wart “Harry’s spiritual ancestor.” (And, indeed, I wonder if White’s odd choice for Arthur’s boyhood name – ‘Wart’ – was a subconscious influence on the name Hogwarts?). White’s novel is a capacious joy that has been highly influential on modern fantasy – see, for example, Neil Gaiman’s generous accuracy in acknowledging it as the reason for similarities between Rowling’s hero and his own Tim Hunter: “We were both just stealing from T.H. White: very straightforward.” One of the links between Tim Hunter and Harry is that both have an owl for a pet: and it is clear that Harry’s relationship with Hedwig remembers Wart’s meeting with Archimedes in Once and Future King: “Wart gently leaned his head against the smooth feathers, and the tawny owl, taking the rim of his ear in its beak, quickly nibbled right round it with the smallest nibbles.” White particularly loved birds, so it is suitable that – in another modern fantasy nod to White – the hero of Lev Grossman’s Magicians is turned into a goose. This is an explicit homage to White, for Merlyn likewise turns Wart into a goose (as well as a hawk, an owl, a fish, a badger, and even an ant) as part of his education. (We might spot likewise the influence of Wart’s unusual schooling on Hogwarts’s student Animagi – learning to turn themselves into a dog, a rat, and a stag as a part of their self-directed curriculum.)

Animals are important to Harry Potter and Fawkes, Hedwig, Sirius-as-a-dog, and the stag and doe Patronuses all play important roles in the hero’s quest. This aspect has been expanded in Fantastic Beasts, where animals have aided Newt in many a tight situation – such as the Swooping Evil/Thunderbird duo enabling the Obliviation of New York, Pickett picking locks and Teddy the Niffler pilfering the blood pact. This follows in a line from The Once and Future King, where animals likewise aid Wart in his quest and even lend moral support as he draws the sword from the stone. White’s fascination with animals, however, is not only visible in Once and Future King but led him to translate (and extensively annotate) a twelfth-century Latin Bestiary, creating what is in some senses a modern version of the form. So much of White’s Book of Beasts is taken up with his own annotations that he creates a composite work – a modern and medieval text that both mediates and meditates on the original.

White discerns in the author of the original bestiary a Newt-like sensibility toward fantastical beasts: “the Bestiary is a compassionate book… it has a reverence for the wonders of life” (The Book of Beasts). Medieval bestiaries – perhaps known in part to Rowling through White’s translation (given her enthusiasm for The Once and Future King, this seems one likely route for her knowledge) – are an important background to the moral symbolism of animals in both Harry Potter and Fantastic Beasts. The raison d’être of bestiaries is to read the natural world in ethical terms: each creature bears a message for the reader, often as either a Satanic symbol or symbol of Christ. Rowling maps this medieval worldview onto her story in Fantastic Beasts but shifts its perspective so that there are no monsters among the animals, only monsters among men. Nonetheless, it looks like we’ll be seeing a few more of those beasts that only Newt could love in Secrets of Dumbledore – chief among them the manticore. Manticores only turn up in Harry Potter as one of the animals which Hagrid has been using for breeding his ‘Blast-Ended Skrewts’ – “highly dangerous crosses between manticores and fire crabs” (GoF 24) – and its appearance in Secrets of Dumbledore is not consistent with how manticores are traditionally conceived (or in the original Fantastic Beasts textbook). In both of these, the manticore has “the face of a man, with gleaming, blood-red eyes: a lion’s body: a tail like the sting of a scorpion” (Book of Beasts). The manticore seems to have kept only its traditional tail but has remained close to the etymology of its name – from the Persian martikhora (“man-eater”).

In May 2018, Rowling placed a Scottish bestiary – the stunning early thirteenth-century Aberdeen Bestiary – as her Twitter header.

The animal she chose for her header is the pelican – a bird which, in the bestiaries, was a symbol of “Our Lord Jesus Christ, who is the originator and maker of all created things” (The Book of Beasts). It is noticeable that many of the beasts Harry Potter takes from bestiaries – such as unicorns, hippogriffs, and the phoenix – are likewise those imbued with Christic symbolism in the bestiaries. Rowling keeps the figurative goodness of these animals explicitly within the novels – such as the unicorn providing life-giving blood and healing tail-hair – but also uses it symbolically in relation to her characters. For example, as Rowling has written of Draco: “his Christian name comes from a constellation – the dragon – and yet his wand core is of unicorn. This was symbolic. There is, after all… some unextinguished good at the heart of Draco.” (Incidentally, White notes in the bestiary section on “Draco the Dragon” that Aldrovandus’ famous work on dragons “deals with humans of the name Draco” and points out that “the words’ dragon’ and ‘serpent’ are interchangeable” (Book of Beasts). This idea underlines the suitability of Draco’s presence in Slytherin).

The unicorn is one of the most strikingly Christological beasts in the bestiaries: “Our Lord Jesus Christ is also a Unicorn spiritually…The fact that it has just one horn on its head means what he himself said: ‘I and the Father are One’” (Book of Beasts). This symbolic holiness may be relevant going into Secrets of Dumbledore, where we are once again going to meet a one-horned beast. This is the qilin – the most important new beast of the franchise and often known as the Chinese Unicorn. It is also the case that we’ve seen unicorns in the set designs of Secrets of Dumbledore. The room in which the Gala dinner is held – the dinner interrupted by Jacob and his wand – is decorated with dramatic paintings of what looks to be a battle between unicorns and centaurs.

This does not appear to be an existing painting (hat tip to Nick Jeffery!) which is interesting and would mean that the subject matter of the painting has been chosen to reflect the concerns of the film. Visually it could have been inspired by Benjamin West’s “Death on a Pale Horse” (1817) (which Rowling chose as a Lethal White-related Twitter heading in 2017). I suspect this battle between centaurs and unicorns, therefore, reflects the way in which medieval bestiaries divide animals into symbols of darkness or light. This scene in which Jacob and Queenie meet again distills the battle between Grindelwald’s forces of darkness and Dumbledore’s crew of light. 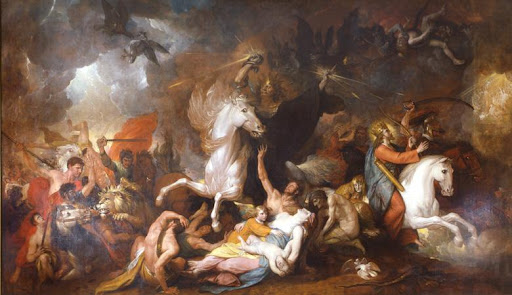 This is “Death on a Pale Horse” by Benjamin West.

Tomorrow’s post will be looking at the ancient Chinese bestiary – the Shan Hai Jing or Guideways Through Mountains and Seas – a crucial text that Rowling scoured to find Chinese beasts for Fantastic Beasts: The Crimes of Grindelwald and The Secrets of Dumbledore.