It was gifted to the sisters by an aunt who had been given the book by J.K. Rowling herself. She inscribed inside the cover, “To Jenny and Lucy, with best wishes, J.K. Rowling” along with the date of “6-9-97,” which is less than three months after its publication date of June 26, 1997. 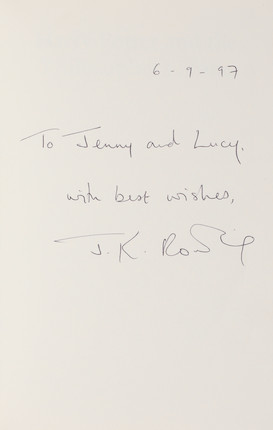 The message inside the book

Realizing its value, the sisters put their first edition safely into storage and bought another copy of the book to read, and since it’s been sitting untouched for the past 25 years, it is still “in pristine condition.” 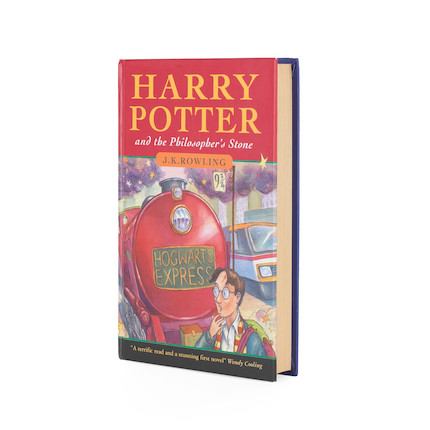 The book contains all the elements that a first edition of Philosopher’s Stone should have: “publisher’s imprint page with the number sequence from 10 to 1, and author cited as ‘Joanne Rowling’, p.53 with the duplication of ‘1 wand’ on the equipment list, misspelling ‘Philospher’s’ on lower cover.”

One of Bonhams auctioneers’ specialists, Luke Batterham, discussed the significance of the book prior to the auction.

Interest in this book just seems to keep growing, and what is wonderful about this copy is its really good condition and very early inscription. When JK Rowling signed it, the book had not yet become a phenomenon.

She gave this copy to a near neighbour in Edinburgh and inscribed it to her young relatives. I believe they had a second copy, which they read, and this one was kept in pristine condition. The relatives were from the Harry Potter generation and are now in their 30s. We are certainly looking at this book potentially breaking the British record.

While the book broke the British record, the world record of a first edition Harry Potter book remains at a staggering $471,000, which was sold in Dallas, Texas, in December 2021.

Bonhams also has other Potter books going up for auction, including four versions of Philosopher’s Stone and a signed first-edition copy of Harry Potter and the Chamber of Secrets. The Philosopher’s Stone books include an uncorrected proof copy of Philosopher’s Stone that has an estimated selling price of £15,000–£20,000 ($18,400–$24,500), a first paperback edition, a hardback first edition from the third printing that contains Rowling’s signature, and a later printing that is inscribed by Rowling, who commented on the book owner’s name, Lily, writing, “You will know that I love your name because I used it for Harry’s mum!”

After the success of Jenny and Lucy’s book, we’re looking forward to finding out what these other books sell for.