Is She or Isn’t She?: Goblins and Anti-Semitism

There has been a raging discussion over comments made by Jon Stewart regarding the anti-Semitic implications of the images of the goblins in the Harry Potter books and movies, especially with them being cast as the “bankers” of the wizarding world. This leaves us with several questions:

1. Was Jon Stewart actually accusing J.K. Rowling of being an anti-Semite?

Having reviewed the recording of the podcast, my reaction to his comments was more about how he came to see the images and the role of goblins in the Harry Potter movies as being strikingly anti-Semitic tropes rather than it was accusing J.K. Rowling herself of being an anti-Semite. Of course, Jon Stewart was right about the goblins being anti-Semitic caricatures, with their large noses, obsession with money, and overall meanness, but he did not place the label of “anti-Semite” directly on J.K. Rowling, as if she was the first and only one to depict the goblins in this manner. This leads to the next question.

2. Did J.K. Rowling intentionally create an anti-Semitic presentation of goblins when writing the Harry Potter books?

The character of goblins long predates J.K. Rowling and her writing of the Harry Potter books. The mythology of goblins dates to the Middle Ages, when anti-Semitism was rampant in Christian Europe. It was a time during which Jews were brutally demonized and butchered, with anti-Jewish hatred being fed by false accusations that Jews were desecrating the host wafers of the church, poisoning Christian wells, and the infamous Blood Libel. This last conspiracy claimed that Jews were kidnapping and sacrificing Christian children, then using their blood in the baking of Passover matzah. Underlying all those myths was the portrayal in the Gospels, especially the Gospel of John, of the Jews, rather than the Romans, as being the ones responsible for the crucifixion of Jesus. That offense came to be known as “Deicide” (the killing of God), and the Jews were burdened with the charge of being “Christ Killers.” Through these myths, the accusation of the Jews being “Christ Killers” morphed from being a pseudo-historical event to one in which the dastardly deed was being eternally replicated by the Jews through their ongoing attacks upon Jesus, the church, and their Christian neighbors. Today, yet another manifestation of this belief is found in the Great Replacement Theory professed by White Supremacists, Neo-Nazis, and Christian Nationalists, claiming that the Jews are engineering a plot to replace the White Christians of America with people of color. No clearer image of that can be found than the one in which the attendees at the 2017 Unite the Right rally in Charlottesville, Virginia, marched with their tiki torches in front of the local synagogue, chanting “the Jews will not replace us!”

To compound those anti-Jewish myths, the harsh realities of medieval Jewish life included Jews being literally forced into money-related professions such as moneylending and tax collecting. They were forced into being moneylenders because, while the evolving medieval economy needed moneylenders in order to grow, the church prohibited Christians from earning interest on loans. They were forced into being tax collectors by the feudal lords in order to make the Jewish tax collectors, rather than themselves, the targets of the anger of the overtaxed serfs, ergo the anti-Semitic association of the Jews with greed, an association that was also tied to the 30 pieces of silver received by Judas Iscariot for betraying Jesus to the Romans. 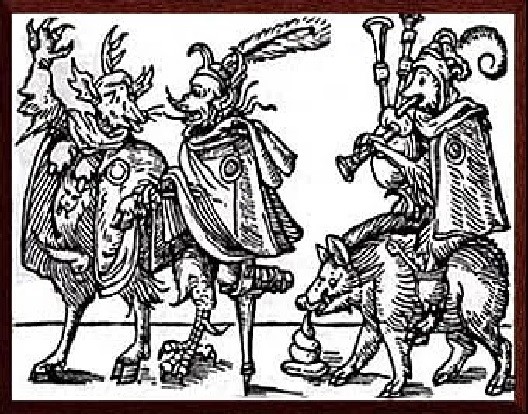 This is a Medieval depiction of Jews.

There can be little doubt that the image and character of goblins were created with the intention of being hate-filled, fear-generating anti-Semitic representations of the Jews, with big noses, mean spirits, gold-obsessed greed, and large pointed ears that appeared like the horns of the Devil (Medieval Christianity depicted the Jews as the spawn of Satan, having horns, and being innately evil). These medieval images of goblins have been carried forward into today, as testified by their repeated appearance in fantasy literature, movies, etc.

Therefore, I believe that J.K. Rowling, in writing her books, simply drew upon hundreds of years of goblin mythology when framing her goblin characters and that she did so without any conscious awareness of the anti-Semitic origins of goblin imagery. I suspect that in her mind, goblins were simply goblins and as such, fit the bill for what she was looking for in her choice of characters to run Gringotts Wizarding Bank.

It is with all this in mind that I thought I would resurrect a 2018 article about how J.K. Rowling called out a fellow British author for his defense of the anti-Semitism of the then British Labour Party leader, Jeremy Corbyn. From this interchange, it is abundantly clear that far from being an anti-Semite, J.K. Rowling has been a friend of the Jewish people.

Please note that J.K. Rowling’s opposition to anti-Semitism does not forgive her very public transphobia. Her animus toward transgender people is an ugly stain upon her character. Such prejudice is painfully counterintuitive to the strong embrace of social diversity with which she fills the pages of the books of the Harry Potter series.