After many months of consultation with players and fans, governing bodies of the game, formerly known as Muggle quidditch, have decided to start a new chapter in the sport’s history.

In joint announcements released today, US Quidditch (USQ), Major League Quidditch (MLQ), and the International Quidditch Association (IQA) revealed that going forward, they will use the name “quadball.” This new name reflects the number of balls used to play the game and the number of positions players can occupy. 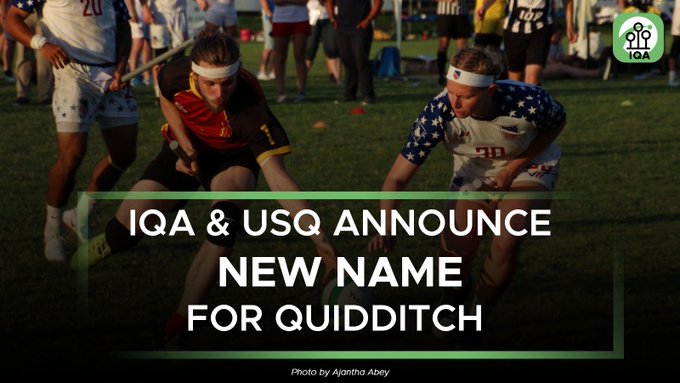 US Quidditch, now US Quadball, which governs the game in the United States, reaffirmed the reasons for changing the name of the Muggle world game inspired by the Harry Potter series.

The governing bodies made the decision to pursue the name change for two reasons. First, J.K. Rowling, the author of the Harry Potter book series, has increasingly come under scrutiny for her anti-trans positions. LGBTQ+ advocacy groups like GLAAD and the Human Rights Campaign as well as the three lead actors in the Harry Potter film series have criticized her stances.

In addition, the sport inspired by quidditch is looking to continue to grow like other sports that have sprung from humble origins. The game commonly known as ultimate Frisbee has officially changed its name to ultimate, in part because ‘Frisbee’ is a registered trademark of the Wham-O toy company that invented the piece of equipment.

Introducing ✨quadball✨
Following the results of polling conducted earlier we, jointly with @MLQuidditch, are excited to announce quadball 🤾‍♂️ as the new name for our sport. @IQASport also plans to adopt the name.
More details: https://t.co/ZcpXTF8wGG
📸 Mike Iadevaia pic.twitter.com/UDEG7RRGX5

Similarly, Major League Quidditch, now Major League Quadball, shared its hopes for a bigger and better future for the game in a letter from league founders Ethan Sturm and Amanda Dallas.

Quadball isn’t just a new name; it’s a symbol for a future for the sport without limitations. With it, we hope to turn the sport into exactly what it aspires to be: something for all.

MLQ will see the rest of the current season out with its current name before joining USQ after the completion of the MLQ 2022 Championship at the end of August.

The IQA, which governs the sport worldwide, will also be completing a scheduled tournament before entering into talks with national bodies about making the change. Its last quidditch tournament will be the 2022 IQA European Games this weekend in Limerick, Ireland, where 20 teams from Europe, Australia, and Hong Kong are set to compete. Speaking about the name change Chris Lau, chair of the IQA Board of Trustees, shared the organization’s confidence in the decision and appreciation for collaboration between the three governing bodies.

We are confident in this step, and we look forward to all the new opportunities quadball will bring. This is an important moment in our sport’s history, and I personally am thrilled to be a part of it. I would also like to thank USQ and MLQ for working to make this happen, and in particular Mary Kimball for being a great partner to navigate these waters together.

The IQA will be joining US Quidditch and Major League Quidditch in changing the name of the sport from “quidditch” to “quadball” on a worldwide basis. pic.twitter.com/8ydGtPN730

Both USQ and MLQ will own the “Quadball” trademark in the US, with the IQA expecting to become a license holder. This new ownership will give the sport the chance to “pursue the kinds of opportunities that [the] community has dreamed about for years.”

What do you think of the new name of the sport? What are your hopes for the future of quadball? Let us know!