Harry Potter fans are keen to get a glimpse of Daniel Radcliffe in his upcoming title role in Weird: The Al Yankovic Story. Luckily, we don’t have too much longer to wait because a release date has been announced and a new poster revealed.

Set to be released on November 4, the biopic will follow the Grammy-winning parody musician in the “unexaggerated true story about the greatest musician of our time,” taking on the form of a mockumentary.

Radcliffe portrays the rebellious Yankovic, who grew up in a family with an unconventional upbringing where playing the accordion was a sin, on his meteoric rise to fame and superstardom. 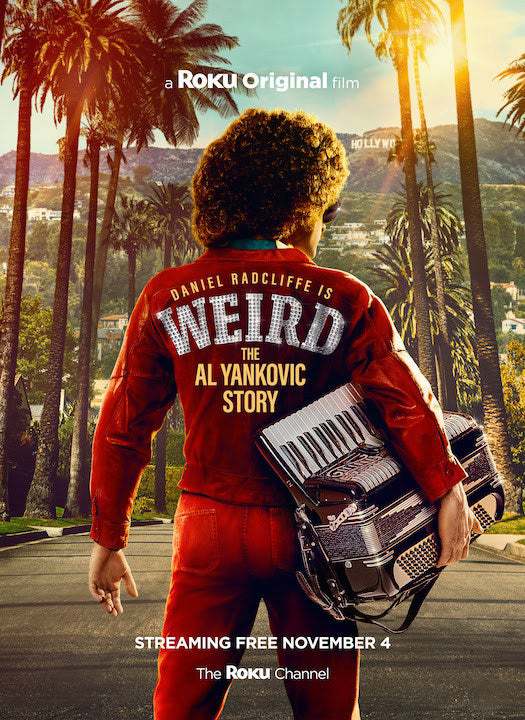 This fall, the film will stream for free on the Roku Channel, and earlier this year, Roku released a teaser trailer for the biopic.

Radcliffe has spoken about the honor and responsibility that comes with playing the role of Weird Al.

Wearing the Hawaiian shirt is a huge responsibility that I don’t take lightly.

And I’m honoured to finally share with the world the absolutely 100 percent unassailably true story of Weird Al’s depraved and scandalous life.

Yankovic himself also gave high praise to the film when Radcliffe’s casting was announced.

When my last movie, UHF, came out in 1989, I made a solemn vow to my fans that I would release a major motion picture every 33 years, like clockwork. I’m very happy to say we’re on schedule.

And I am absolutely thrilled that Daniel Radcliffe will be portraying me in the film. I have no doubt whatsoever that this is the role future generations will remember him for.

Daniel Radcliffe will star alongside Evan Rachel Wood (Across the Universe) as Madonna and Quinta Brunson (Abbott Elementary) as Oprah, and you’ll be able to stream the film through Roku streaming players, Roku-powered TVs, and NOW and Sky Q devices.