Tom Felton Reveals the Cover of His Upcoming Book, “Beyond the Wand”

Tom Felton has taken to Instagram to reveal the cover of his upcoming magical memoir, Beyond the Wand: The Magic and Mayhem of Growing Up a Wizard. Sitting on a bench in the sunshine, Felton thanked fans for being excited about the book and for submitting fan art interpretations of possible covers and guesses for who has written the foreword. He then teased at upcoming information about chapter titles and “lots of exciting details to come” before showing both the back and the front cover and exclaiming, “Mum, I wrote a book!”

The front cover features a black-and-white image of Felton having his tie straightened and makeup applied as if he is preparing for an appearance or photo shoot. In the top third of the book, Felton’s name appears in pink text. On the bottom third, “Beyond the Wand” appears in green cursive writing.

The sneak peek of the back cover continues the pink and green theme and features two photos of Felton as Malfoy. It also features an excerpt from the book.

… the adults […] went down the line asking each one of us which part of the book we were most excited to see on[-]screen. I remember being underwhelmed by the question. As the responses came, clear and certain – Hagrid! Fang! Quidditch! – I remember standing there wondering if I could go home soon. It was only when it came to the turn of the kid next to me that I realised [that] not only had I given the question zero thought [but also] I had absolutely no idea what anybody was talking about. Who was Hagrid? What was a Quidditch? My neighbour announced that he was most excited to see Gringotts, and I thought to myself, [‘]What the hell are they? Some kind of flying animal, maybe?[‘]

From this excerpt, we’re excited to see what other memories Tom will share in Beyond the Wand when it’s published on October 13 in the United Kingdom and October 18 in the United States. 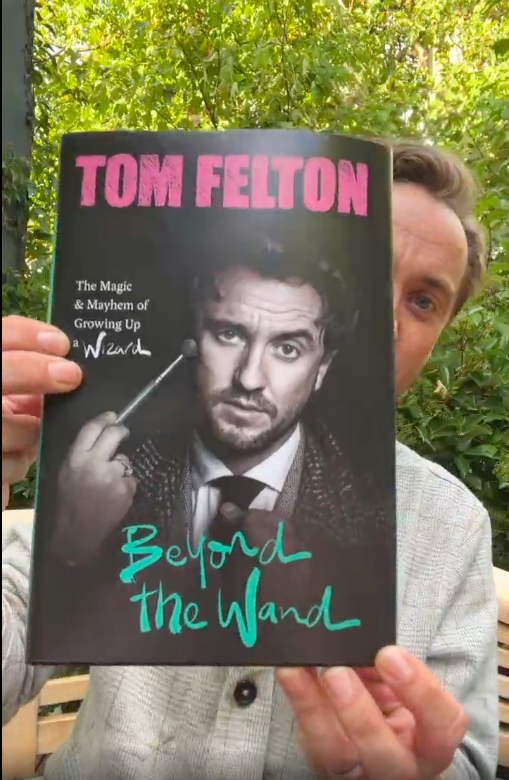 Tom holds up the front cover of his book. 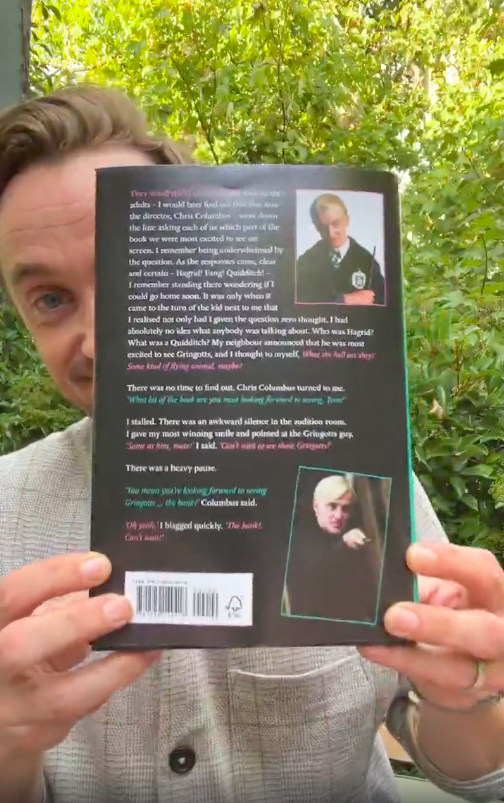 Tom shows off the back cover of his memoir.

What do you think of the cover of Tom’s book? What about his fun memory of his audition for the first Harry Potter movie? Let us know in the comments!