Any Harry Potter fan who was lucky enough to get to London on September 1 probably found themselves among fellow witches and wizards at London’s King’s Cross station to enjoy the Back to Hogwarts celebrations.

As a new term at Hogwarts began, fans were in for lots of magical treats throughout the day, including a live event and exhibition hosted by Potter fans Sam Thompson (Made in Chelsea) and Capital FM presenter Vick Hope, who led a countdown to 11:00 a.m. – the time the Hogwarts Express leaves platform nine and three-quarters. 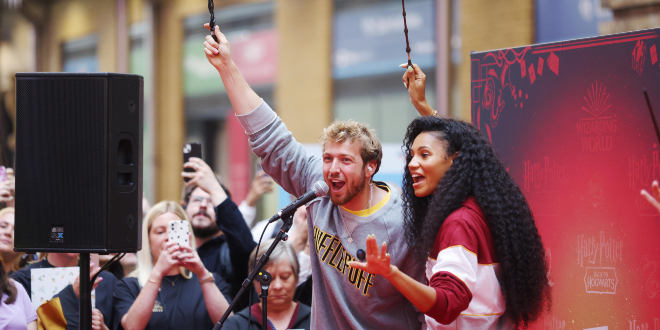 Fans who were at King’s Cross were able to participate in wand combat sessions, which were led by Paul Harris, the wand choreographer who is “responsible for the instantly recognisable wand combat seen in several of the Harry Potter films.”

He showed the crowds how to ward off Death Eaters and how to perfect their Defense Against the Dark Arts stance. 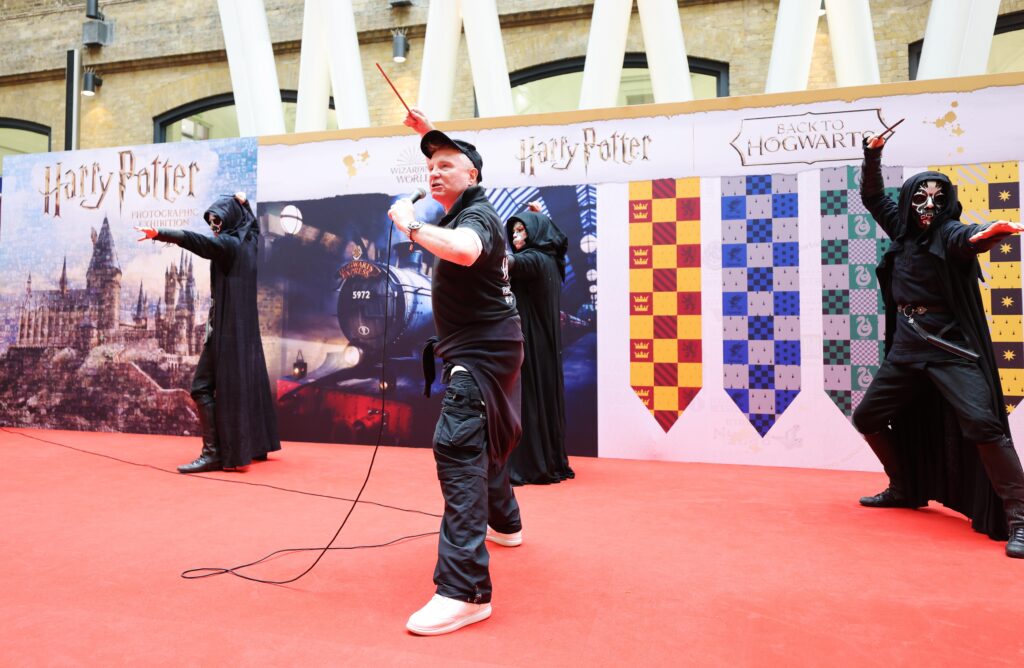 After the workshops, the crowds were treated to a special version of the “wand dance” by the West End cast of Cursed Child. 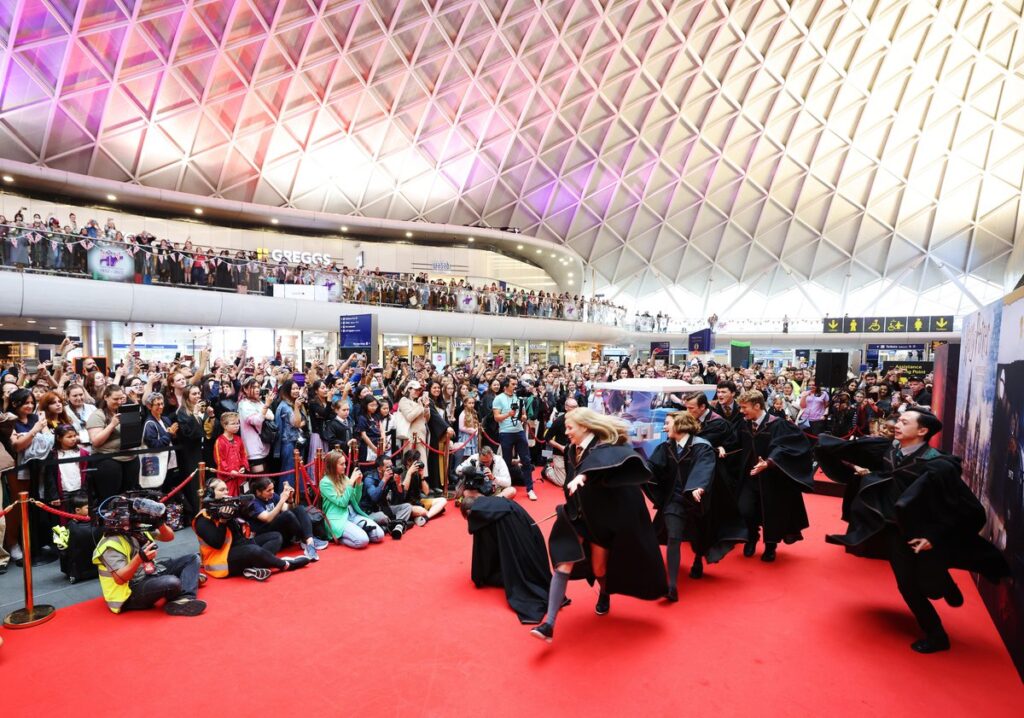 The cast of “Cursed Child” performing the “wand dance”

From September 1 to 4 between 9:00 a.m. and 5:00 p.m., there was also the opportunity for all visitors to the station to pose for selfies with some enchanting objects. 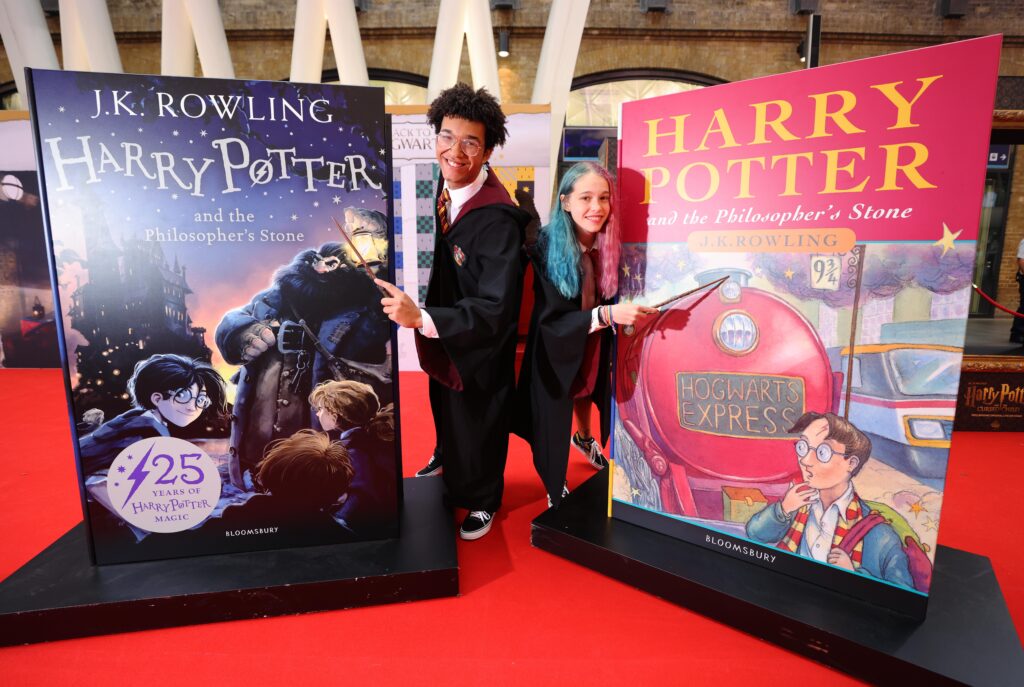 Two impressive LEGO Harry Potter builds were also there to take pictures with on the day, including the infamous Sorting Hat. 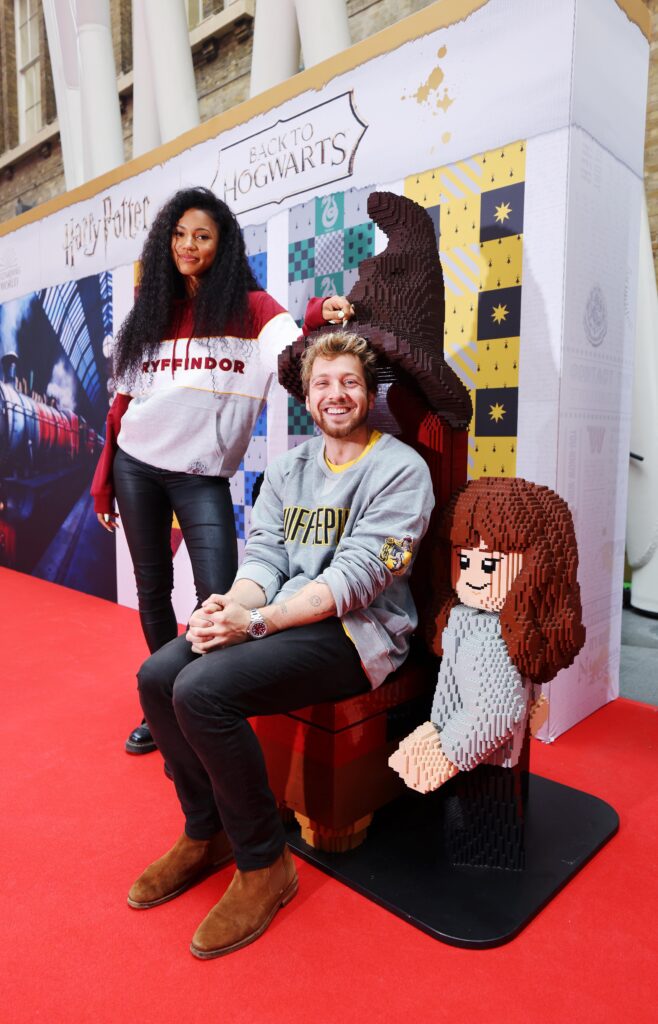 Hope and Thompson with the LEGO Sorting Hat 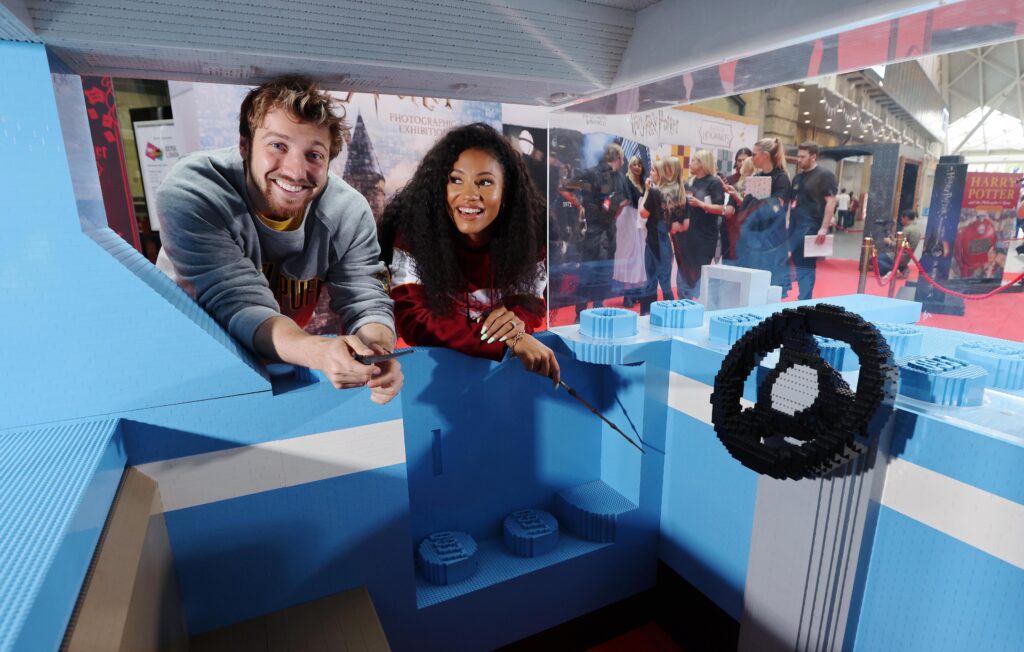 Thompson and Hope with the LEGO Ford Anglia

Other photo opportunities included a Cursed Child photo booth, which featured a blank portrait space for fans to take photos within, as well as an image of Cursed Child‘s Albus Dumbledore because who wouldn’t want a selfie with him? 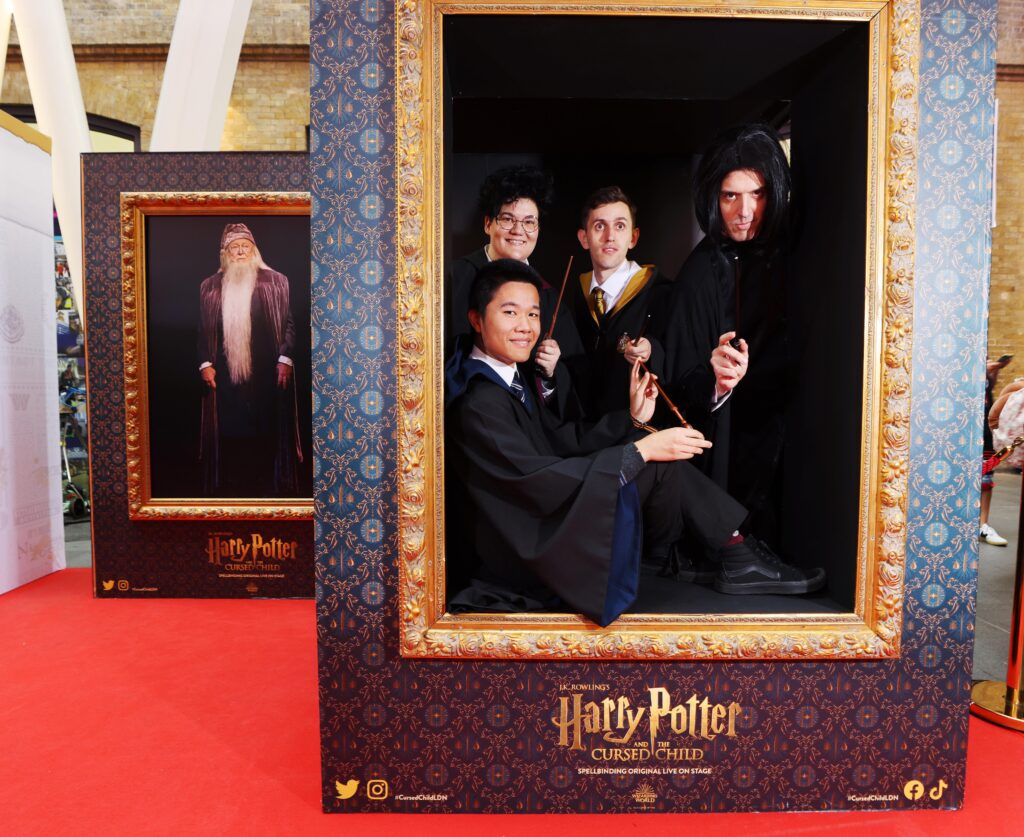 With it being 25 years since Sorcerer’s Stone was first published, we knew that this year’s Back to Hogwarts celebrations would be truly spectacular, and they certainly didn’t disappoint.

HARRY POTTER FANS FLOCK TO LONDON FOR BACK TO HOGWARTS CELEBRATIONS, AS A NEW TERM BEGINS

1st SEPTEMBER 2022 – Hundreds of fans flocked to Wizarding World’s much-loved Back to Hogwarts celebrations at London’s King’s Cross for a live event and exhibition hosted by Wizarding World fans Made in Chelsea’s Sam Thompson and Capital FM presenter Vick Hope.

Gryffindors, Slytherins, Ravenclaws and Hufflepuffs of all ages descended on the station’s concourse to see the train to Hogsmeade light up the departure board and watch performances from the cast of Harry Potter and the Cursed Child, Warner Bros. Studio Tour London’s Death Eaters, and Paul Harris, the Wizarding World wand choreographer.

25 years ago, J.K. Rowling introduced us to the mysterious [p]latform [n]ine and [t]hree[-q]uarters [and] the scarlet Hogwarts Express and explained the significance of an 11:00 am departure in Harry Potter and the Philosopher’s Stone. Since then, the Harry Potter series, which has sold over 600 million copies worldwide, been translated into over 80 languages and [been] brought to life on[-]screen in 8 blockbuster films, has built a global community of dedicated fans.

Having begun as an organic fan celebration, Back to Hogwarts is now recognised globally as a moment for fans of all ages to come together in celebration. Sam Thompson and Vick Hope led the crowds in a countdown to the 11:00 am departure of the iconic train as it makes its way to Hogwarts School of Witchcraft and Wizardry for another year of adventure.

Fans participated in special [w]and [c]ombat workshops led by Paul Harris, the [w]and [c]horeographer responsible for the instantly recognisable wand combat seen in several of the Harry Potter films, as he taught prospective Dumbledore’s Army members how to ward off Death Eaters and perfect their best Defence Against the Dark Arts stance.

Following the workshops, the West End cast of Harry Potter and the Cursed Child performed a special version of the popular ‘wand dance’ as seen in the multi-award-winning stage play.

Sam Thompson, host of [the] event and Made in Chelsea star, said, “Being a massive Harry Potter fan, I jumped at the chance to come down to King’s Cross and host the live countdown for the Back to Hogwarts Day celebrations this year. My expectations were already sky high, but I was blown away when I saw so many amazing Wizarding World fans had come down for the day, absolutely smashing it with their costumes! Highlight for me was having one-on-one [w]and [c]ombat training with Paul Harris, the Wizarding World wand choreographer, and it was brilliant to see the cast of Harry Potter and the Cursed Child perform the ‘wand dance’ too.”

For the first time ever, it isn’t just those who attend on the 1st who can join in the fun, with the celebrations at King’s Cross lasting into the weekend and offering fans of all ages a chance to experience the magic first hand [sic].

From 9 am [to] 5 pm each day, until the 4th September, visitors to the station will also be able to grab selfies with two one[-]and[-]a[-]half[-]metre[-]tall, giant-scale book replicas of Harry Potter and the Philosopher’s Stone (featuring Thomas Taylor’s cover art, first published by Bloomsbury in 1997, together with the classic Johnny [sic] Duddle special 25th Anniversary edition), as well as pose for photos with impressive LEGO® Harry Potter big builds of the Hogwarts Sorting Hat and Mr Weasley’s blue Ford Anglia.

For fans who have dreamt of making their own journey to Hogwarts, a brand-new Hogwarts Express video booth will enable them to see themselves sitting in the very carriage graced by Harry, Ron and Hermione! Passengers can share their content on social media by tagging #BACKTOHOGWARTS.

Wands at the ready! The fun continues after the countdown as [w]and [c]horeographer Paul Harris will be instructing lucky members of the public on how to defend against the Dark Arts. For budding witches and wizards looking to learn from the expert, Paul will be hosting a wand training session at the start of every hour from 10:00 am through to 5:00 pm on Saturday 3rd September.

To stay up to date with the latest Back to Hogwarts and Wizarding World news, content and announcements, join the community of millions of members by signing up to the Harry Potter Fan Club at www.wizardingworld.com/harry-potter-fan-club.