Of Birthdays and Rainy Nights

The following is an imagining of how Hermione and Ron might have celebrated her 22nd birthday. All fan art is by the author.

Work can sometimes overwhelm you. Sometimes, on a rainy September evening, all you want to do is spend time with your beloved and forget the world.

The brightest witch of her age had the same feeling. Three years after going back for her seventh year at Hogwarts and getting a job at the Ministry, she wished to celebrate her birthday with Ron and have a good time.

She had just arrived home from the Ministry. Hermione enjoyed being a part of the Weasleys’ lives.

She would turn 22 in a few hours. She was searching for Horcruxes just yesterday — Okay, maybe that’s not the best thing to think about.

“Ronald should be home any minute,” said Molly.

“The shop is a little busy these days,” Hermione replied.

Even though she knew he wouldn’t forget, Hermione was hoping Ron would wish her a happy birthday first — he had been a bit busy with work lately.

Hermione went to her bedroom upstairs to read a book before the Weasley brothers arrived home from the joke shop. Nothing beats doing what you love when birthday anxiety sets in.

She started to open her windows when she felt an embrace from behind with warm hands enveloping her.

“Ron, I thought you’d be late,” she whispered, as she felt her anxiety vanish.

“Oh no, did you think I would forget your birthday? That’s rude, ‘Mione.”

She shook her head, annoyed at herself for believing he wouldn’t be the first to wish her well. “Maybe,” she said.

“I am sorry for being busy these days. George needs me at the shop, but that doesn’t mean I would forget your birthday,” he explained while observing Hermione’s reflection in the window glass as it poured outside.

“We are so busy these days that I thought maybe you would be late,” she said and turned around to face her husband. 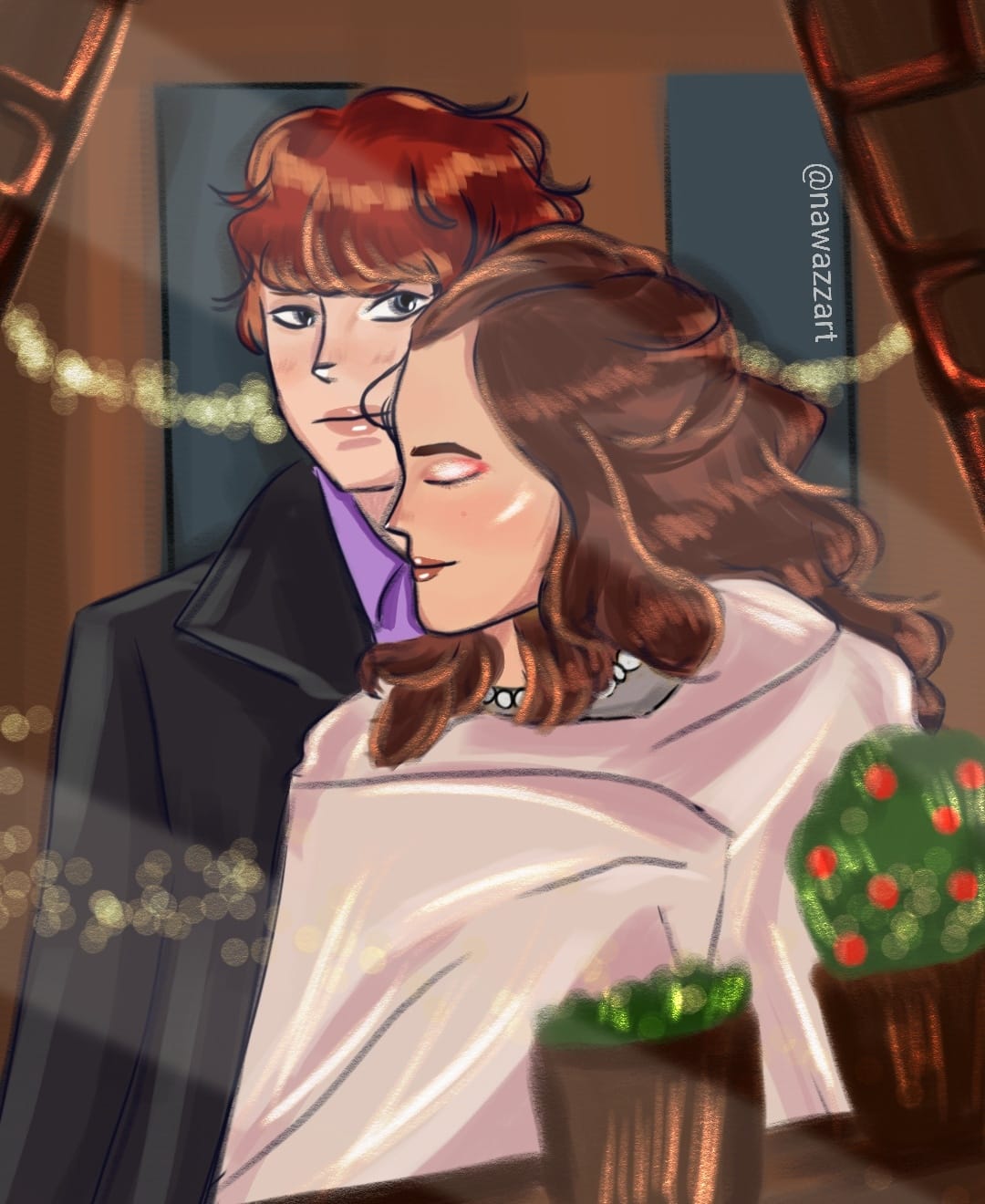 “Sorry, it won’t happen again, best friend.” He stroked her hair while grinning at her.

They smiled at each other for a long moment, before continuing to stare back at the rain.

“It feels so good to just stand like this after so long,” Hermione added.

“I love you more,” Hermione said.

“Mmm. To make you happier… Harry and Ginny will be here tomorrow,” Ron said.

“Ah, I am glad, it’s been a long time since I have seen them,” Hermione said, smiling.

“Yes, they have been busy. Ginny had a game today in Germany and Harry is training some Aurors tonight,” Ron said thoughtfully.

“I know — hopefully, tomorrow will be a fun day for them.”

She looked back to see Ron taking long sniffs.

“What is it?” she asked, confused.

“Mom’s baking a cake for your birthday. Let’s go.” And with that, he hurried downstairs.

Hermione chuckled at her husband’s antics. It was one of the reasons why she had fallen in love with him all those years ago.

It was ten past twelve, and Hermione was watching the Weasleys celebrating her birthday with a chocolate cheesecake.

Ron swiftly caught Hermione’s attention with every intention of sneaking out with her. She questioned him with her bright brown eyes; he replied by casting a peek in the direction of the front door.

After some time, the two went outside and saw the heavy clouds lifting, revealing the glittering stars in the night sky.

Even though Hermione wasn’t much of a flier, she happily accepted Ron’s invitation to join him as he grabbed his Firebolt that was sitting next to the entrance.

“Where are we going?” She asked.

“The stars,” he murmured, smiling, and with a wham, they were gone.

Hermione clung to Ron tightly from behind as the temperature dropped and the night became darker. It was cold, but Ron’s love made her warm. They discussed everything and nothing at all, and the time just flew by as they were up in the air.

“Do you know what you said in the hospital wing in sixth year when you were half senseless after being poisoned?” asked Hermione.

“No, what did I say?” said Ron, concentrating.

“Nothing, you just said my name. That’s why Lavender got so upset,” she laughed.

“Bloody hell, why didn’t you tell me? That’s why she was so mad.” Ron grinned, shrugging.

It had started to drizzle again as they arrived back at the Burrow at 2:27 in the morning.

Hermione was hooked on his sea-blue eyes the entire time. She could deep dive into them.

Ron carefully pulled a diamond necklace with the words “swish and flick” embedded on the locket.

He put it around her neck and held her hand — a reminder of their first few conversations and their inseparable bond. Who knew a swish and flick in the first-floor girls’ toilets in their first year would lead to their happily ever after?

“Happy birthday, ‘Mione,” he whispered as he pecked her cheek.

Then they went inside.