The match-three game Harry Potter: Puzzles & Spells, which entranced Potter fans worldwide when it launched in September 2020, is celebrating its second anniversary by sharing some magical milestones.

The game progresses through moments from within the Harry Potter films, starting with Harry Potter and the Sorcerer’s Stone, and features popular characters from the Harry Potter and Fantastic Beasts series. As players solve match-three challenges, they move up levels and unlock new spells and magical abilities. Daily Events allow players to improve their skills, and they can play as part of a club, climbing the leaderboard alongside clubmates to win challenges.

In celebrating its two-year anniversary, Puzzles & Spells has revealed that more than 5.4 billion puzzles have been completed since its launch. 368 in-game events have taken place, over 649,000 clubs have been created, 44 magical creatures have been released, and over 10 billion spells have been cast, which is equivalent to 9,774 every minute. Plus, in the last six months alone, over 61 billion gems have been collected. 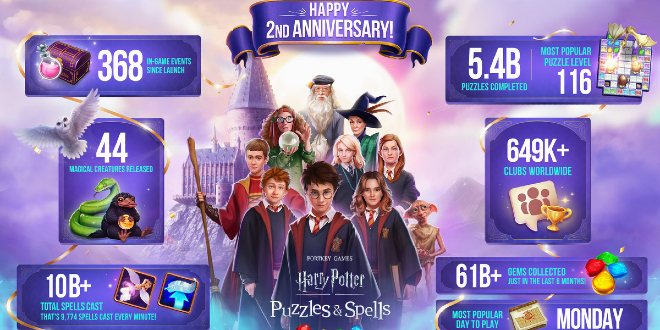 The game often features special themed events or challenges, with the most recent one offering players the chance to collect the Niffler and unlock the Qilin in celebration of the release of Fantastic Beasts: The Secrets of Dumbledore.

Other past events include a Fantastic Feasts event during the festive season last year, an Egg Bonanza event that encouraged players to collect Easter eggs that were hidden within puzzles, and a Magical Mischief event that featured the shenanigans of Fred and George Weasley.

Have you been one of the many players to enjoy Puzzles & Spells over the last couple of years? With much more content and many more events to come, we can’t wait to see what the future holds for Harry Potter: Puzzles & Spells.