Ring Composition in “The Prince’s Tale”

Upon revisiting “The Prince’s Tale” (Chapter 33 of Harry Potter and the Deathly Hallows) alongside the podcast Alohomora! (Episodes 340 and 346), I was struck by the reminder that  Snape is never told about Voldemort’s Horcruxes (with the exception of Harry). But it seems Snape does know about ring composition given the memories he chooses to give to Harry.

A work has ring composition when there is a pattern of connections (elements that repeat, either straight or inverted) between particular scenes/chapters over the course of it, most importantly between the start and end and the middle (which is sometimes called the pivot, or turning point, of the story). For example, a hypothetical nine-chapter story will have connections in a pattern like this: 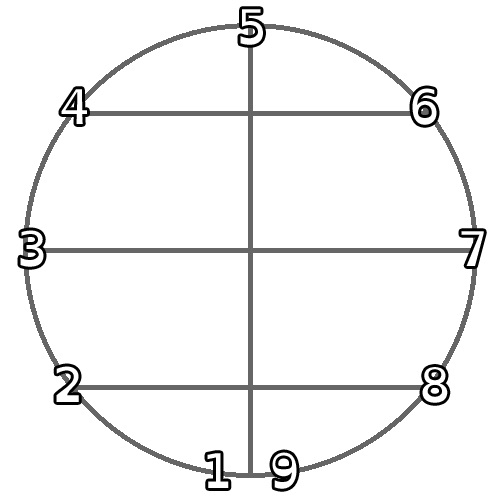 The structure will not necessarily follow this pattern perfectly – in this example, Chapter 3 may also have connections to Chapter 6 or Chapter 8. This structure can apply at many levels: from (to take a completely random example) the whole of a seven-book series about a boy wizard to a single novel or even an individual chapter. As I’m about to explain, ring structure can sometimes even exist within part of a chapter.

Snape gives his story through 20 memories1 (in chronological order, with the possible exception of #19). I’ll briefly summarize them here – the chapter is worth a reread if you want more detail/context – and will otherwise refer to them by number:

Here are the connections and parallels that I noticed within Snape’s memories. The first half is about his meeting, befriending, falling out with, and eventually grieving Lily; the second half is about his working with Dumbledore to defeat Voldemort (a significant change in his life’s focus and approach – at least as he tells it). There are likely other connections that I’ve missed4 – feel free to share any that you find.

Snape has a plan that involves spying on a Potter (or a soon-to-be-Potter) from behind some bushes (Lily in #1; Harry in #20).

Snape tries to be polite about Muggle-borns (lying to Lily that her heritage won’t matter at Hogwarts in #2; demanding Phineas Nigellus not use “Mudblood” in #20).

Snape noses into other people’s rooms (Petunia in #3; Sirius in #19) and reads their mail.

Characters are traveling (by train in #4; by broomstick in #18).

Snape is cutting (trying to wound with words in #4; in #18, trying to protect with a spell but hitting the wrong target) toward a prankster associated with Lupin (James – a fellow Marauder – in #4; George – Lupin’s decoy “Harry” – in #18).

A rough-looking character plays an important role (the Sorting Hat in #5; Mundungus Fletcher in #16 and #17).

Snape keeps things secret (his dismay at Lily being Sorted into Gryffindor in #5; his involvement in the “Seven Potters” plan in #16 and #17).

Characters are appalled at cruelty (Lily at the behavior of Snape’s wannabe-Death-Eater friends in #6; Snape at Dumbledore’s plan to allow Voldemort to kill Harry “at the right moment” [DH 551] in #15), but their feelings are casually dismissed.

Characters don’t respect the efforts made on their behalf (in #6, Snape states his belief that James saved his life only out of self-preservation; in #15, Snape accuses Dumbledore of using him as a spy under false pretenses).

(Note: Some of these connections are based on memory #7 as presented in DH, ch. 33; some require details from the original, complete version in OotP, ch. 28.)

Characters are quizzed about their lessons (the Marauders-era students take an OWL exam in #7; Snape asks what Harry has been learning with Dumbledore in #14).

Characters are keeping their distance after a previous experience was painful (Harry doesn’t want to rewatch James and Sirius being bullies in #7; Dumbledore in #14 believes Voldemort is staying well away from Harry’s mind after trying to possess him at the Ministry of Magic).

Snape (in #7) is unaware of how close he is to the Marauders, due to being too absorbed in reviewing his exam paper, whereas Dumbledore (in #14) is cautious of his surroundings, checking that he and Snape are alone before discussing sensitive topics (yet still being overheard by Hagrid, who mentions the argument [HBP 380]). #7 and #14 both occur under trees (a beech tree on the grounds and the edge of the Forbidden Forest, respectively).

Snape regrets a choice but is not able to fix or change it (he calls Lily a Mudblood in #7 and tries to apologize in #8, but she is unwilling to give him another chance; he doesn’t want to kill Dumbledore, but Dumbledore holds him to his word in #14).

Both Snape and Dumbledore turn to each other in desperate need of help (Snape in #9 trying to protect Lily from Voldemort; Dumbledore in #13 after being cursed by the ring Horcrux).

There is anger at someone’s selective protectiveness (Snape in #9 wants to protect Lily but doesn’t care about James or Harry; Dumbledore in #13 wants to preserve Draco’s soul – by not letting him become a murderer – but is indifferent toward Snape’s).

Great things are asked of Snape, at first generally (“And what will you give me in return, Severus?” from #9, 544) and later specifically (in #13, he is asked to kill Dumbledore before he is killed by either the curse, Draco, or another of Voldemort’s followers).

There are echoes in pieces of dialogue between Snape and Dumbledore.

Snape shows determination and courage to continue his path (in #10 despite Lily’s death; in #12 despite Voldemort’s impending return).

Dumbledore questions Snape about his feelings (in #10 whether he is remorseful; in #12 whether he will succumb to fear).

Dumbledore gets in a pointed jab at Snape (in #10 asking him if he remembers Lily’s eyes; in #12 musing about Sorting too soon, implying Snape should be a Gryffindor).

The central pivot – though a very short scene – expresses a truth universally acknowledged: Snape hates Harry because he sees James in him instead of looking for Lily, and Dumbledore doesn’t take that seriously enough.

Combined with #1 and #19, we get Snape summarized: It’s all for Lily, and Harry is not Lily.

The pivot also represents the first entry in the second half of Snape’s life story – when his focus is on helping Dumbledore defeat Voldemort. The memories ultimately present Snape as a fairly pitiable figure: coming from a difficult home life, being bullied at school, losing his only friend (and the only girl he loved), and spending the rest of his (too short) life doing difficult and dangerous work for no recognition or reward.

Except that it pays to remember that this is Snape’s story as he tells it. We should also remember that he’s left a lot of things out: whether he was a bully alongside his proto-Death-Eater friends, all the horrible things he probably did as a Death Eater, the years of bullying students as Britain’s most obnoxious Potions teacher (it’s not just Harry – Snape already has a bad reputation before Harry even gets to Hogwarts). While Dumbledore probably believes Snape is trying to redeem himself (by helping defeat Voldemort), I’m of the opinion it was always purely for revenge. Always.

1 Note that I am only analyzing the book version of Snape’s memories. The film version uses a different collection of scenes, forming more of a montage narrated by key pieces of dialogue. It’s clearly chosen for cinematic effect, and I suspect (though I haven’t gone over it in any detail) that it includes snippets of some scenes where Snape wasn’t even present.

3I find this particular memory a bit of an oddity. Dumbledore’s death must have happened between memories #15 (the last conversation with Dumbledore) and #16 (the first conversation with Dumbledore’s portrait), and given that Snape (as Dumbledore’s killer) would have been barred from Grimmauld Place fairly swiftly, it seems like #19 occurs out of order. Maybe it’s not a memory Snape intended to include, but he was unable to control his dying thoughts (finally acknowledging Lily’s eyes in Harry and remembering seeing them as a family in the photograph).

4 It’s worth noting that different people analyzing a work for ring composition could apply the structure differently – it’s rarely perfect, as I said earlier – matching different parts together and choosing a different chapter/scene/etc. as the pivot. Doing so could draw out an alternative meaning from the piece, as well as give new insights and perspectives. For example, #10 could be the turning point since it’s where Snape decides to work against Voldemort and protect Harry, but then the other memories would match up slightly differently.

This editorial was written and submitted by a reader. The views expressed within it are the sole opinion of the author. To submit your own editorial, please follow our submission guidelines.
Did you know that MuggleNet is 99% volunteer-run? With your monthly pledge of $5, you can provide monetary support to our volunteers while becoming eligible for exclusive swag giveaways!
Support us on Patreon