As a dreadful baker, I made the clearly logical decision of attempting to recreate the Padfoot Cupcakes listed under Rosmerta’s Recipes. Though I tend to steer clear of cooking, given that it’s commonly a stressed-filled affair in my case, these Sirius Black-inspired treats caught my eye. So I got to work!

While it was a bit of a struggle on my part, I made it through without any tears shed, though I feel it is important to note the difficult and confusing aspects of the recipe. For instance, both butter and sugar are listed as part of the ingredients, but they are not included in the instructions. As a result, I had to consult my local cooking expert for advice on when to add in the aforementioned elements — she reported back that they should be mixed together just before step six. Additionally, chopping the chocolate bars was not as simple as I had anticipated. In consequence, it may be wise to instead use chocolate chips if you are not an expert confection cutter either.

Once I had mixed the ingredients, the rest was relatively easy. As the directions had predicted, it took exactly 20 minutes for the cupcakes to bake, though I was only able to make 21 rather than the 24 the recipe had promised.

After all the decorations were finished, I finally reached the step I had most been looking forward to: the tasting. Though I am not a skilled chef, the cupcakes were absolutely delicious. Moreover, the dog footprint designs, which were crafted from various candies, added an extra layer of flavor to the dessert that was surprisingly delightful. 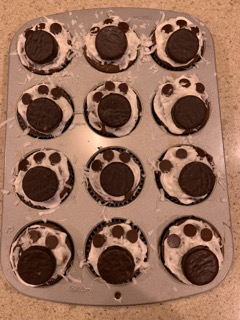 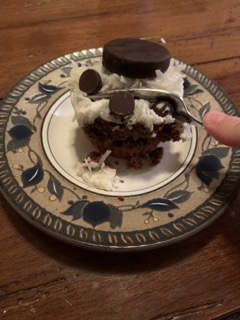 Cutting into a “Padfoot Cupcake”

While even just the prospect of cooking sets me on edge, these cupcakes ended up being quite enjoyable to make. I struggled to complete the steps in order, but I did actually finish with an edible product. It is interesting to note, though, that the process took much longer than anticipated. The recipe is estimated at around 45 minutes, and I finished everything in well over 90, but this could simply be due to my personal shortcomings as a cook. Nevertheless, the lengthy procedure was not without reward, because the cupcakes did not disappoint.

If you are a Harry Potter fan, or even just a cupcake enthusiast, I highly recommend these baked treats. If you have a recipe of your own that you would like to share, we would be more than happy to post it to our site for all readers to enjoy.