This is an imagining of how Harry, Teddy, and Draco might have spent their time before Teddy’s fourth Christmas. All fan art is by the author.

Christmas was on its way, and Andromeda Tonks was cooking some hearty porridge for her grandson and his godfather, who was visiting them over the weekend. Harry was twenty; Teddy was three. They were best friends — and not just any best friends. They were more of the “I love you so much, I will sometimes steal your hair color” kind of best friends.

“Here you go, Ted. A yellow star on top of your Christmas tree, just like you wanted,” said Harry, smiling, after magically putting the star on the treetop. 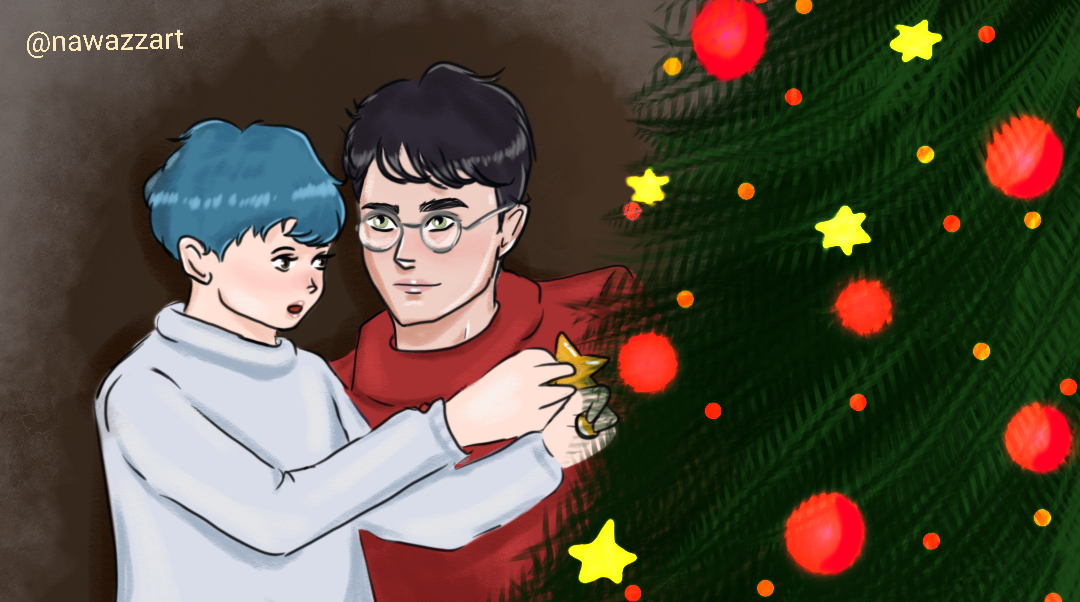 It was sweet moments like this that Harry looked forward to after a grueling week of catching dark wizards as an Auror. When Remus and Tonks passed away, Harry knew that he had to give the boy all the love that he could, despite his schedule, and it came to him naturally. Although they didn’t get to play during the week, every Saturday, Harry took the blue-haired kid back to his house at 12 Grimmauld Place, and he spent the entire Sunday with Teddy and Andromeda at her house.

This was Harry’s life now, and he loved it. On weekends, his friends occasionally came over to hang out with them, or he would bring Teddy along to catch up with them.

“So, Teddy, what do you want from Father Christmas?” Harry asked the boy.

The boy opened his fist and got lost in deep thought, staring at it. A few moments later, he said, “Ted wants a bwoomstick.”

“All right Teddy, I am sure he will give you just that.” Even the idea of giving Teddy his first flying lesson made Harry smile and think back to his own first time on a broom. He had already bought a Firebolt from Quality Quidditch Supplies a day ago. He had seen Draco Malfoy there.

Sometimes, he seriously felt like thanking the git. Had Draco not stolen Neville’s Remembrall that day long ago, Harry would not have realized how good of a flyer he was. Harry knew about Draco’s transformation and efforts to make amends with those he had hurt. Andromeda and the Malfoys had even started exchanging letters and she talked about them a lot, but Harry had never seen the Malfoys visit her.

Teddy and Harry were decorating the tree when they heard a knock on the door.

“I will be right back.” Harry kissed Teddy’s hair and walked toward the door. He could not believe his eyes when he looked outside.

He exclaimed as he opened the door, “Malfoy!”

“‘Hello, come in,’ are better words to say to a guest, don’t you think, Potter?” Malfoy scoffed.

“Uh… oh, yes, please, come in.” Harry adjusted his glasses and gestured for Malfoy to enter. “Did you call me ‘Harry’?”

“Yes,” Malfoy said sheepishly. “It’s your name, isn’t it?” He straightened his back, trying to regain some confidence. 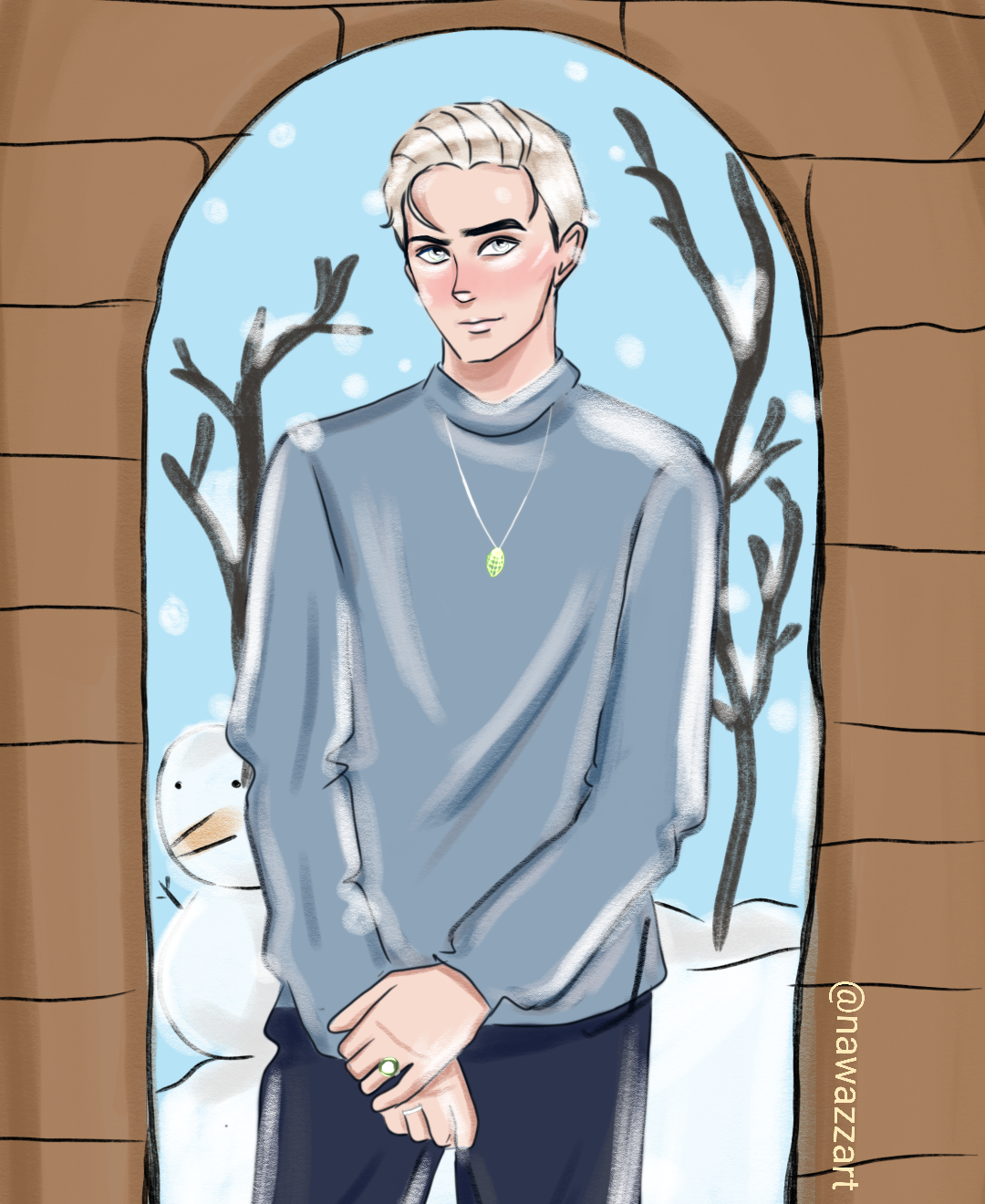 As Draco and Andromeda started chatting, Harry got curious about what the ferret boy was even doing there in the first place.

“Harry, do you mind if Draco plays with you and Teddy?” asked Andromeda, with her soft smile.

“Um, absolutely not,” Harry said, albeit reluctantly as he turned Teddy around, who was too busy playing with glitter stars. He began, “Teddy, this is your uncle —”

“Ugh, stop. I’m no uncle. He can just call me Draco,” snapped Draco, which made Harry smirk.

Although he saw it, Draco chose to ignore the look and elegantly got up from his chair. His style had switched from classic suits to a more relaxed chic look. The grey knitted sweater and black chinos complemented his white blonde hair and pale grey eyes.

He came toward Teddy near the floor and extended his right hand, “Hi, Teddy. I’m Draco, and I want to be your friend,” he said.

“Dweko,” Teddy said and gave him an extra golden star in his hand.

Teddy had fun decorating the room with Draco, who embellished the tree with ornaments and Sorting Hat tree toppers with a flick of his wand.  With animated voices and simple questions like “What’s your favorite color?” (yellow, of course) and “What’s your favorite toy?” (a train, obviously), he was making Teddy giggle.

Anyone could answer such simple questions about Teddy — at least, Harry could. He tried not to feel upset as he watched Teddy, his godson, become close to the slimy git. He didn’t even realize when Teddy had wandered so far away from him, to the other side of the room. Merlin’s beard, he needed to get a hold of himself.

Draco left soon afterward with a star in his hand. He kissed Andromeda’s cheek, ruffled Teddy’s hair, and gave Harry a small nod before he left.

“Will he come back?” Harry asked Andromeda, who was now baking cookies.

“Yes, Harry. I am glad he is trying to become a better man. He wants to spend time with Teddy,” she replied. “I hope you don’t mind. I wouldn’t want to make you uncomfortable.”

The gesture made Harry smile. “I don’t mind at all,” he said. But in his heart, he did not feel so confident.