Warwick Davis, who portrayed Professor Flitwick and Griphook in the Harry Potter films, has reprised the titular role on the Disney+ series Willow. Davis played the protagonist in the original film, a dark fantasy drama that was released over 30 years ago, in 1988.

The new series is directed by Jonathan Kasdan and set years after the film, serving as a sequel. Davis aims to “entertain people” through his acting and wants his characters to “transport” people. This was helped by the fact that Kasdan let Davis improvise a lot of his lines.

If you think about the film, one of the things that made it stands [sic] out was it was never a fancy film that took itself too seriously. So we really liked to have a laugh where we could.

As with any sequel (or indeed, prequel), fans love to see connections or references to the original production that they know and love. And Davis believes that fans of the original will enjoy “those callbacks to events that had happened in the film.” 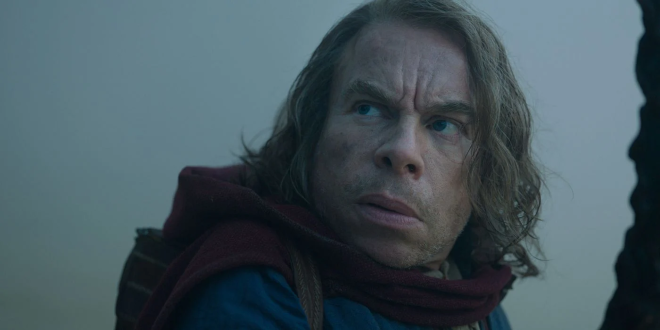 Davis lives near London with his wife, Samantha; daughter, Annabelle; and son, Harrison. Sadly, complications from dwarfism genes resulted in the death of the couple’s first son, Lloyd, nine days after he was born. Davis believes this sad experience brought him and his wife closer together.

But it’s an experience I wouldn’t wish on anyone. It’s devastating. You do learn to live with it. Eventually, over time, you’re able to better understand why it happened and can come to terms with it a bit more. But you never get over it.

They suffered another tragedy when their second son, George, was lost due to a miscarriage.

Following these losses, their daughter Annabelle was born in 1997, and their son Harrison in 2001. The family is very close and were even able to be together and work together on Willow, which was filmed during the pandemic, with Harrison acting as Davis’s stand-in, Annabelle playing his on-screen daughter called Mims, and Samantha being within their COVID bubble for the duration of the filming.

Davis has described his daughter as “a brilliant actor in her own right,” and admitted that they had “lots of fun playing the scenes together.” Annabelle is also known for playing Sasha Bellman in the CBBC series The Dumping Ground and from 2023, began playing Lace Lloyd in Hollyoaks. Annabelle and Harrison also both made brief appearances in Harry Potter and the Deathly Hallows – Part 2 as goblins in the scene at Gringotts Bank.

I’m so glad you’re all enjoying Willow! And I’m over the moon you love Mims too! I hope you’re having fun on this adventure, it’s only just begun 💫

Willow is streaming now on Disney+ with a new spisode released every Wednesday! #Willow pic.twitter.com/455FJLbiVI

Willow is available to watch on Disney+. Will you be watching the series if you haven’t already?