Castium Revelio: A Devilish Poster and a Musical Rebellion

We’ve got four trailers this week, featuring characters like a rebellious bookworm and a young female detective, plus a devilish David Tennant poster. 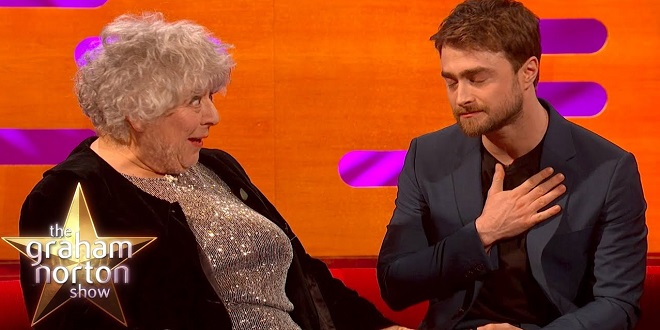 In what was apparently their first meeting since wrapping the “Harry Potter” film series, Daniel Radcliffe and Miriam Margolyes had more than their share of tales to tell on the “Graham Norton Show” couch!

Eddie Redmayne and Jude Law appeared on “The Graham Norton Show” to discuss “Fantastic Beasts: The Crimes of Grindelwald” and more.

Castium Revelio: A School Visit and a Charity Banquet

In this week’s edition of Casting News, we have an unfortunate update for fans of Ezra Miller; plus, one “Harry Potter” actor visited a primary school in England for a very special reason! Find out more!

In this week’s edition of Casting News, one alum is preparing to play a scarecrow, and another sees an elephant fly! Check it out!

We may know Daniel Radcliffe as the actor who played Harry Potter, but there’s a lot of evidence to show he’s done some interesting things in his past lives too!

Daniel Radcliffe Set to Appear on “The Graham Norton Show”

“The Graham Norton Show” – known for having some of the most sought-after stars on its sofa – has just revealed the line-up for its February 17 show, and we have a feeling you’re going to love it…

“Fantastic Beasts” Roundup: Give Us the Coat!

It’s a brand new year, and do you know what that means? Yes, it means that the first installment of “Fantastic Beasts and Where to Find Them” is hitting our screens this year.