If you were excited to visit Universal Orlando to immerse yourself into the Wizarding World of Harry Potter – Hogsmeade and Hogwarts Castle, you are definitely going to want to see the all-new expansion area Wizarding World of Harry Potter – Diagon Alley. MuggleNet had the amazing opportunity to get a tour of the behind-the-scenes construction with Universal Creative to explore this magical new world.

There will be lots of very little nice moments and details that you will overhear.

Wizarding World of Harry Potter – Diagon Alley will be located within Universal Orlando, in the previous locale of Amity Island and the Jaws attractions. Visitors will be able to enter Muggle London from either side of the lagoon onto Charing Cross Road or by taking the Hogwarts Express from Hogsmeade station (of which absolutely no details were given to us at this time) to King’s Cross station. The square of Muggle London will feature the Shaftesbury Memorial Fountain of Piccadily Circus and the iconic Knight Bus. While fans will not be able to board the Knight Bus, both it and the fountain will provide fans with exceptional photo opportunities.

The facade of Muggle London from left to right is King’s Cross station, Leicester Square tube station, Wyndham Theatre, and Grimmauld Place. All are constructed in such rich detail that it will transport you to modern day London.

Not yet constructed nor revealed to us is the exact manner in which visitors will make the transition from Muggle London to Diagon Alley. However, when posed to Gilmore, he stated that it would be a “clever solution.” Upon entering, the Leaky Cauldron, a brand-new restaurant with a new, full menu, will be immediately to your left. The Leaky Cauldron has extremely high ceilings and will seemingly accommodate many hungry visitors. Directly across from the Leaky Cauldron is Quality Quidditch Supplies, a store emblazoned with the Hogwarts Crest that will supply Quidditch teams with essentials. Next to this is the colorful and exciting Weasleys’ Wizard Wheezes – complete with the film’s iconic entrance.

Walking farther down the alley, on the left we find the entrance to Knockturn Alley, which houses the shop Borgin and Burkes. On the right, we find a cluster of store front facades including Flourish and Blotts, the Daily Prophet, Spindlewares,and Ollivander’s repair shop, followed by Ollivanders, the original wand shop as seen in the films. Opposite is Madam Malkin’s, Slug and Jiggers, McMullpepper’s Apothecary, and Florean Fortescue’s Ice Cream Parlor that was previously rumored but is now confirmed. Florean’s will house a number of amazing ice cream flavors that fans will surely enjoy.

We have a new street here. This is Diagon Alley, and this cross street is actually Horizont Alley. That came from J.K. [Rowling] herself. There were other streets, but in the film they only ever showed Diagon […] Harry got to go to Knockturn and Diagon, but in order to tell more of the story, a more authentic city experience, we needed to create more streets, and she would have had them if the story went further, but this is now where they exist. – Alan Gilmore

Horizont Alley, a cross street of Diagon Alley, will house Wiseacre’s and other various storefronts that were not revealed to us. It will also be the home of the very large Gringotts Bank. Very few details on the bank are known except that it will house a ride of some kind, themed around the vaults seen in Deathly Hallows. The bank currently sits at the same height as the rest of Diagon Alley, and we were told that it has “a long, long way to go.” We don’t have anything further to share but were assured that details would be soon to come.

Looking down Horizont Alley, visitors will be able to visit (and likely purchase items at) Wiseacre’s Wizarding Supplies and Carkitt Market, another feature named by J.K. Rowling directly. Carkitt is modeled after the large trade markets found in London, and according to Gilmore, it will be a “gathering place within the Wizarding World – Diagon Alley. If anyone has been to London, and has been to an old London market, this will be a very authentic realization of that.” The modern market, while a work in progress, will be a nice juxtaposition to the Victorian, older design of Wiseacre’s – which is likely several hundred years older. “Again, it’s that European layering, where little buildings are built right next to buildings of different times. It’s very romantic, and it makes for very interesting spaces.”

Since Horizont Alley was not complete at the time of the tour, we walked back down Diagon Alley (which, if visitors look up as they walk, advertisements and even the Leaky Cauldron hotel can be seen) and across the alley between Weasleys’ Wizard Wheezes and Flourish and Blotts to the opposite side of the alley. Here, visitors will find Gregorovitch’s wand store (wands of ash, cherry, elm, hawthorne, holly, rosewood, walnut, and willow), plus a directional sign helping visitors find their way through the massive space. The back of Weasleys’ Wizard Wheezes can also be seen, newly painted, bright, and exploding with advertisements for their products. There is also a House-Elf Placement Agency (much to Hermione’s dismay), a shop that sells family-sized broomsticks, plus many more stores to be revealed in the future.

What you’re seeing here is coming together very quickly now, really starting to accelerate. A lot of this is happening in days. There is so much more beyond this, that you will find out in the future. Hogsmeade is a much simpler place – it’s a Scottish village, very traditional looking buildings – here you’ve got the big city, the much more layered, more historical, of a greater time period. – Alan Gilmore

There are several ways that Universal Creative plans to bring each part of Diagon Alley together, to fully immerse visitors in the experience. The one that was shared with us can be seen in the Harry Potter and the Prisoner of Azkaban film. Fans will recall a Muggle train that rides past Harry’s room while he was staying at the Leaky Cauldron, shaking the surroundings and making a lot of noise. This train will also pass above the Wizarding World of Harry Potter – Diagon Alley, not physically (they don’t have room for yet another train!), but as Gilmore explained, “There will be many sensory details that will make it feel like you’re deep within the city.”

Finally, the big question. Exactly how big is Diagon Alley? Well, actually, pretty much the same size as Hogsmeade. The big difference? Muggle London. It was described to us as “above and beyond” anything they did in Hogsmeade – and we completely agree. 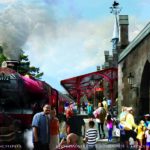 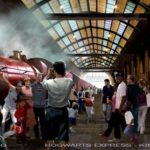 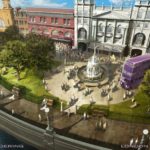 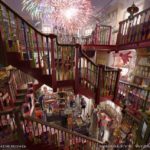 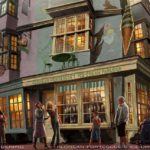 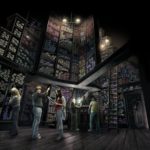 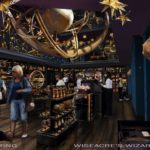 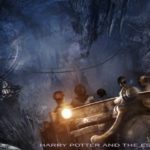 Stay tuned for our fully detailed experience reports, plus more updates from Universal Creative, in the coming days and months.