by Monica Dieleman and Mikaela Renshaw

Harry Potter: The Exhibition made its 16th stop in Utrecht, the Netherlands. Hosted inside the CineMec building, it was open in between February 11, 2017, and September 2, 2017, after which the exhibition continued its extended tour into 2020.

Coming to the Netherlands for the first time, the exhibition has chosen a place that may not be in the direct center of the city of Utrecht but gives all the space the creators of the exhibition could possibly want.

“Here it was a custom-made venue for us, for the first time, so it was absolutely perfect,” exhibition creator Frank told us. “The ceiling heights and walls are just right, and the sound is great. That made us very excited about the facility.”

Everyone who enters the CineMec building is welcomed by the flying Ford Anglia, Mr. Weasley’s infamous car, which was used by Fred, George, and Ron to rescue Harry from the Dursleys. Further in the CineMec, you enter a hall where you can have a Harry Potter-themed picture taken with the choice of different backgrounds, and then you go through the doors to the exhibition itself. There, a lucky few get Sorted into their Hogwarts House by the Sorting Hat. 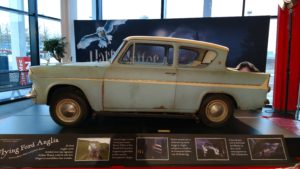 After the Sorting Ceremony, a member of the school staff takes you through doors, which are reminiscent of the doors of the Great Hall, and suddenly, you are on platform nine and three-quarters, with the Hogwarts Express next to you. With the Hogwarts Express on your left, you enter the Gryffindor common room, filled with props everyone knows, like Ron’s, Harry’s, and Hermione’s wands, the painting of the Fat Lady, and the beds the boys slept in in the Gryffindor dorm. Past the dorm, you enter a section dedicated to the classes and teachers of Hogwarts, from Umbridge to Trelawney. Make sure you stop by the Herbology section to try your hand at repotting mandrakes. Just take care to cover your ears first. 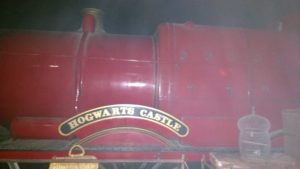 The next room focuses on a different aspect of wizarding life: Quidditch. The room has props and costumes from the Hogwarts House teams and from the Quidditch World Cup, such as the official uniform of the Irish Quidditch team. You can also get a chance to try out part of the sport yourself, by tossing Quaffles through goalposts. 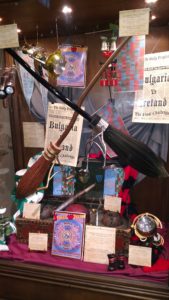 Once you’ve wandered off the Quidditch pitch, you find yourself coming to Hagrid’s hut. The detail on this room is incredible and really makes you feel like you’ve stumbled onto the grounds of Hogwarts, or at the very least a film set. If you look on the table, you can even see Norbert’s egg, just on the verge of hatching. You also have the opportunity to sit in Hagrid’s armchair. I should warn you, though; it’s large enough to swallow you. 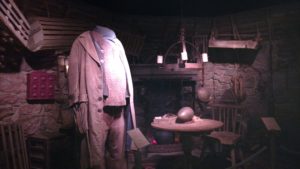 From there, keep a wary eye out as you make your way into the Forbidden Forest, where you can see creatures like centaurs, an Acromantula, and even a dragon. The baby Thestral can be a bit hard to see in the dark, but if you look closely, you’ll find it. Of course, the Forbidden Forest does hold all the Dark forces of the exhibition. The next room is dedicated to just that. Full of the wanted posters and the clothes of prominent Death Eaters like Bellatrix Lestrange and Fenrir Greyback, this room shows the darker side of J.K. Rowling’s world. And to top it all off, in the center is a case full of Harry Potter’s Darkest magic: the Horcruxes. 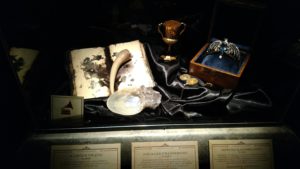 Once you’ve made it past that room, you find the props reminiscent of happier events, such as the Skiving Snackboxes, and robes worn at the Yule Ball. You can also find Fawkes the phoenix here, settled majestically upon his perch. From there, sadly, you reach the end of the exhibition. But to ensure your ability to keep precious memories and mementos of the event, there is, of course, a small gift shop where you can purchase souvenirs.

Overall, Harry Potter: The Exhibition is a stunning tribute to the wild and fantastical world J.K. Rowling gifted to us. It will remind you why you fell in love with the series in the first place. Thus, it’s a highly recommended must-see for all Harry Potter fans who can make it to Utrecht before the end of June when the exhibition closes.

Read Monica and Mikaela’s full report, including interviews with the Phelps twins and the creators of the Exhibition here!