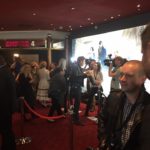 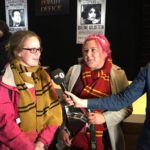 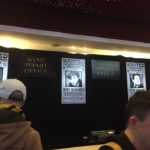 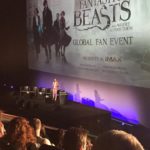 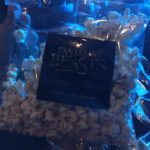 Fans from all venues were able to submit questions, and the entire event was livestreamed on Facebook.

If you don’t have time to watch the whole thing, here are a few highlights:

The cast, along with David Yates and David Heyman, spoke about their experience working on the film and their expectations for its release. While all were charming and entertaining, they were also very careful not to reveal any new information about the film… That is until J.K. Rowling herself made a surprise appearance and shared that the Fantastic Beasts trilogy will actually be at least five movies instead of three.

A RETURN TO J.K. ROWLING’S WIZARDING WORLD FANTASTIC BEASTS AND WHERE TO FIND THEM FACEBOOK LIVE Q&A

No-Majs and Muggles: Before Harry Potter, there was Newt Scamander…

Please join us in celebrating a new era of magic decades before Harry Potter and a half a world away from Hogwarts with our Facebook Live Q&A. Moderators in the UK, and US will host a live discussion today with the stars of FANTASTIC BEASTS AND WHERE TO FIND THEM, Thursday, October 13th, at 12:30pm PDT (3:30pm EDT). The Live Q&A can be seen on the official FANTASTIC BEASTS Facebook Page:

Sue Kroll, Warner Bros. Pictures, President of Worldwide Marketing and Distribution, stated, “The enthusiasm and support of wizarding world fans everywhere has meant so much to us, as well as the filmmakers. We are proud to share some exciting footage from Fantastic Beasts and Where to Find Them at this global event created just for them, and are especially thrilled that most can experience it in IMAX.”
Attendees will first be treated to a never-before-seen reel featuring some of the thrilling moments from the much-anticipated film.
Fans at each location will be presented with a specially designed Fantastic Beasts and Where to Find Them exclusive t-shirt, commemorating the worldwide event, as well as a collectible mini-poster.

Alison Sudol, who portrays Queenie Goldstein, tweeted a cast photo from the event, which you can see below:

Fans who attended the Global Fan Event were also given a special-edition poster as part of the festivities. Check it out!

Attendees were gifted with a replica of Newt Scamander’s wand. Here a photo from our London correspondent, Lizzie: Copyright: Lizzie Gladwyn, MuggleNet. Do not repost without permission.

Advance tickets for Fantastic Beasts also went on sale in the US today, and they’ve been on sale in the UK since August, so if you haven’t gotten your tickets yet, now’s the time!

Did you attend the event in a theater, or did you watch it live? What did you think?