Today, Diagon Alley is adorned in black. Instead of the normal joyous sounds, shuffling feet and rustling cloaks are the only things heard. Occasionally you hear a sniffle or see someone wipe a tear from their cheek. You turn the corner and see a crowd of people standing in front of Ollivanders Wand Shop. This is the reason you came. You ease your way to the front of the crowd and lay your flowers in front of the door of the shop, like so many before you. 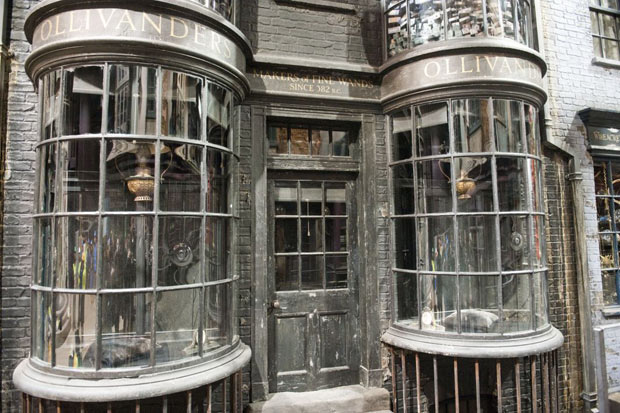 Today is the day that the news broke. Garrick Ollivander has passed away. This famed wandmaker has touched the lives of so many. You turn to leave and realize someone is about to speak. They take a deep breath and begin.

Mr. Ollivander is one of the few people who has touched the lives of a majority, if not all, of the people who wander the cobbled streets of Diagon Alley. Every one of us here can remember the day we excitedly ran to Ollivanders when we were school age and it was time to get our wands. For years we pressed our noses up against the glass and watched wands choose their wizard until our parents grabbed our hands and pulled us away. This was the man who created the most powerful tools a wizard uses. What is a witch or wizard, without their wand?

At this point, the speaker wipes a tear from their cheek before continuing.

Our society will not be the same without this kind and gentle soul. Hopefully, Mr. Ollivander’s son will follow in his father’s footsteps, so the next generation of Hogwarts students can receive the unparalleled quality of an Ollivander wand. Let us now raise our wands in honor of the great wand designer, Garrick Ollivander. He may be gone, but his heart and memory live in all of our wands. To Ollivander!

The crowd raises their wands, igniting the tip. The passers-by stop and raise their wands in tribute as well. You have never seen Diagon Alley this bright.

The lights die down, and the crowd moves on. As you walk down the street, you turn back to look at Ollivanders one last time. You see a little girl lay her toy wand before the door. You wipe a tear from your cheek and make your way out into the Muggle streets.

Goodbye, Mr. Ollivander. You are gone but will never be forgotten. Thank you for your years of dedicated service to wandlore and the creation of the most amazing wands in existence. We will miss you, Mr. Ollivander. However, all will be well.

Please take a minute today to raise your wand in memory of Sir John Hurt. Another amazing actor, gone too soon. /*