We previously confirmed the attendance of some of the cast and crew from Fantastic Beasts, as well as the confirmation that J.K. Rowling would be walking the red carpet at this year’s BAFTAs, which was hosted by Stephen Fry. The film was nominated for 5 BAFTAs: Outstanding British Film, Production Design, Costume Design, Sound, and Special Visual Effects.

You can take a look at some of the red carpet arrivals below, including video of some our favorite stars signing autographs for fans who waited outside Royal Albert Hall, in the cold, just to meet them. 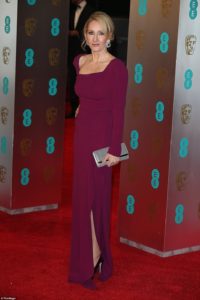 After this evening’s winners were announced, fans cheered at the win for Production Design by Stuart Craig and Anna Pinnock, who brought fans new and old into 1920s New York City for a journey with the wizarding world’s most famous Magizoologist, Newt Scamander.

Star Eddie Redmayne met up with author J.K. Rowling at the awards, taking a selfie together so that fans around the world could see all the fun they were having. Eddie looked smashing in his white tux – take a look!

However, Eddie’s job was more than to attend the awards as a cast member of Fantastic Beasts. He presented the award for Leading Actress to Emma Stone for her role in La La Land.

Eddie Redmayne swoops on to stage to present the award for Leading Actress #EEBAFTAs pic.twitter.com/kg26Sfmvst

Fans of the musical Hamilton pretty much lost their minds upon seeing Lin-Manuel Miranda posing with Rowling inside the awards show, with the caption, “All was well.”

Other winners of BAFTAs tonight include projects that former Potter cast were a part of. Sir John Hurt’s film, Jackie, took home Best Costume Design, and Best Animated Film went to Kubo and the Two Strings, which featured the voice talent of Ralph Fiennes.

Additional congratulations to Stephen Fry, who’s hosting gig was so well-done that the legendary Meryl Streep kissed him on stage!

That moment when Meryl Streep comes on stage to kiss you! ? #EEBAFTAs pic.twitter.com/AILpS5Q5Tg

Our sincerest congratulations to all the nominees and the winners of the 2017 BAFTAs! A full list of nominees and winners can be found on the BAFTA website here.