Katrina Lindsay had quite a project on her hands when she was chosen to design and create the costumes for Harry Potter and the Cursed Child. Since most of the main characters had already been brought to life by the preceding Harry Potter books and movies, it was important to make the looks of the characters feel familiar.

Even though the story takes place 19 years later, when the characters have grown into adults, they still needed to convey the same personalities established by the original series. Fans of the books and movies already have an idea established in their minds of how the characters should dress, so in order to make the production coincide with those preconceived images, Lindsay needed to put a lot of thought into the details of the costumes. She discussed these challenges in a new video:

The world of Harry Potter is huge, and it’s in everyone’s consciousness really, and these characters are so loved by so many people, and they’re very iconic. So I was very aware when I was designing it that I had to hit a balance where they were uniquely their own things for stage but also that people would straight away recognize the characters as soon as they walked in. This concept especially needed to apply to Harry, Ron, and Hermione since their characters are the most iconic and were so well established prior to the play. In order to accomplish this, a specific color and style were established for each of them.

Harry’s look needed to portray the adventurous and daring spirit fans know and love but in a more mature mode to represent his current position as a respected Ministry of Magic employee. Jamie Parker, who played Harry in the original London cast and will continue in the role in New York, discussed how they even needed to try multiple suits on him in order to find the one that fit Harry’s personality perfectly.

We were all very very keen to make sure that the first time you see Harry that it just feels right. He’s a Ministry man, but he’s not just a bloke in a suit. That’s way too anonymous. 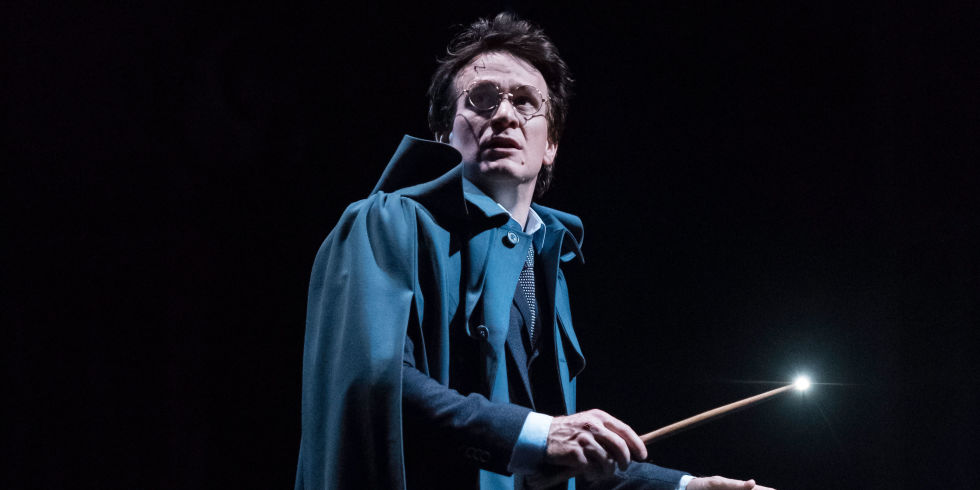 With Ron, Lindsay took a much different approach. She wanted to convey his relaxed, comfortable, approachable nature while incorporating the familiar element of Weasley knitwear.

I thought he should just look really comfy in everything. He’s so relaxed and at home in himself and in the environments he finds himself in. So we went for soft textures – cords and knitwear. And I wanted to keep that Weasley family theme with the knitwear. I don’t think this jumper was homemade by his mum, but I think it has the feeling of something he would go for, having lived in a lot of homemade knitwear in his life.

Lindsay felt that it was very important for the main trio to be quickly and easily recognizable on stage. In order to achieve this, she established a specific color palette for each of them. The costumes for Harry consist mostly of blue and teal, with his trenchcoat being the staple piece of his wardrobe. Ron, however, is most often seen in a striped orange sweater. The choice of orange for Ron’s wardrobe is a natural fit due to the preestablished association of his family with their iconic ginger hair color.

Lindsay chose a deep purple as Hermione’s color because it has a strong association with the Ministry of Magic and power, befitting her role as the current Minister of Magic. Having these specific colors as focal points for Harry, Ron, and Hermione makes it easier for the audience to quickly recognize them as soon as that color is spotted on stage. The other benefit to having a singular color palette for each character is that it establishes a certain amount of uniformity for the production. This is extremely important for theater since the actors can change often. The wardrobe must be versatile so that it can be adjusted for different body statures. In this case, even if the costumes change slightly in appearance, as long as the main color scheme is kept, a certain element of uniformity remains. Lindsay comments on how this element is key for this particular performance:

I was very clear about the color palette for those characters… Those are very strong, clear looks that we’ve got on the stage show… I feel like I’ve kept it quite clean so that, actually, whoever is playing those roles, the visual language doesn’t really change.

Designing costumes for a production full of characters that are already well known and loved by many posed challenges for Lindsay that she didn’t typically need to overcome with her past projects. She certainly rose to the occasion to make sure that she did the characters justice and did not stray too far from their personalities. This was important for the cast as well, who would be the face of these characters on stage.

Hopefully, we got something that’s self evident. That’s what we want so that it feels instantly familiar. We want people to see them so that people feel like the story is safe in our hands and that we’re taking that responsibility of the life that everybody has lived with these guys seriously.

After seeing the new West End actors assume the roles, it’s clear that Lindsay achieved her goal of designing costumes that can maintain their basic style and color scheme despite a changing cast. Jamie Glover (Harry), Thomas Aldridge (Ron), and Rakie Ayola (Hermione) stepped into the roles and their costumes seamlessly (no pun intended). Over the next few years, as the cast changes and opens in new locations, we’ll be able to see just how versatile Lindsay’s designs can be. You can see Katrina Lindsay’s incredible work for yourself on Broadway by registering for the upcoming ticket release on the Cursed Child website or catching the performance in London. You can also read more about Lindsay’s thoughts on costume design and see other photos of the fitting process on Pottermore and watch the full interview video featuring her and Jamie Parker below.