NBC’s Today as well as members of the cast of Fantastic Beasts: The Crimes of Grindelwald took a trip this morning to Parkside Elementary School as a promotional stop for the upcoming movie. Eddie Redmayne (Newt Scamander), Jude Law (Albus Dumbledore), Ezra Miller (Credence), Callum Turner (Theseus Scamander), and Zoë Kravitz (Leta Lestrange) joined representatives from Warner Bros. and 104.3 WZYP onstage to interact with the students and guests of Parkside Elementary at a special assembly at the school.

The cast of #FantasticBeasts: the Crimes of Grindelwald spend the day celebrating the Wizarding World with students and community from @parksidejrhigh in Baileyton, Alabama! [via @fantasticbeastsmovie]

Over the summer, two teachers from the small town of Baileyton, Alabama, made it their mission to transform the seventh- and eighth-grade hallway of Parkside Elementary School into their very own Hogwarts School of Witchcraft and Wizardry. Jacy Douglas and Tracey Jones led the project and the hallway was completed by the start of the school year in August. Since then, the news of their incredible hallway has spread across the wizarding world – all the way to NBC.

In an interview with WVTM 13 News, Cullman County Schools superintendent Dr. Shane Barnette stated, “J.K. Rowling is the one [who] has kind of pushed to include Parkside in the publicity promotional stops for the new movie.”

The morning started out with some giveaways and a Fantastic Beasts trivia competition between students and parents. Pottery Barn Kids provided backpacks from its Harry Potter collection for the trivia winners and in addition, each student was able to take one home after the assembly. Following trivia, the school principal, Mr. Orr, stood up and expressed his thanks to Warner Bros., Today, and his faculty and staff for making this wonderful day possible. This led into the introduction of the cast members who spent their time onstage having fun with the kids and raving about the beautiful Harry Potter-themed hallway.

Eddie Redmayne spoke about how blown away all of the cast members were at the murals covering the walls of the hallway.

Wow, guys, I cannot even begin to tell you how inspired we are by what we have just seen in your school. It’s properly, properly breathtaking.

Jude Law spoke endearingly of his parents, who were teachers, and how honored he is to be able to play a teacher as brilliant as Albus Dumbledore. He followed up with some well-deserved compliments for the Parkside teachers.

And we’re here today to celebrate your teachers for creating this environment and inspiring you guys all to dream and learn and also celebrate you guys for participating and being a part of this wonderful environment.

Ezra Miller spoke of his childhood and the effect that the Harry Potter series had on his education, inspiring the kids at Parkside to use Harry as inspiration as well.

I was a strange kid, had a weird brain, [and] had a hard time in school the whole time. For me, I ended up getting a lot of the learning that was most valuable for me from ‘Harry Potter’ books. They taught me about things like friendship and love and passion and integrity, and it also taught me really important stuff like how you have to question authority, defy it sometimes, and often break the rules!

After each cast member expressed his or her sentiments, the cast had a special surprise for Parkside – a Crimes of Grindelwald poster featuring J.K. Rowling’s signature as well as a check for $25,000. The cast members and WB representative presented a $25,000 check to Parkside principal Mr. Orr and the four responsible for the Hogwarts-themed hallway.

After parents and guests left the assembly and the students had eaten lunch, teachers and staff set up games and competitions in the gym – featuring the cast members. The students were divided into four Houses – which they were Sorted into at the beginning of the year – and played mini-games with Redmayne, Law, Miller, Turner, and Kravitz.

The sounds of the students screaming and cheering at the assembly were full of energy and unmatched in volume. Turner expressed in an interview with CBS 42 that the best part of the day was “just seeing the kids’ faces and the adrenaline that was in the room – it was amazing.”

Check out this video featuring the famous hallway, as well as some amazing photos taken by Jacy Douglas below. 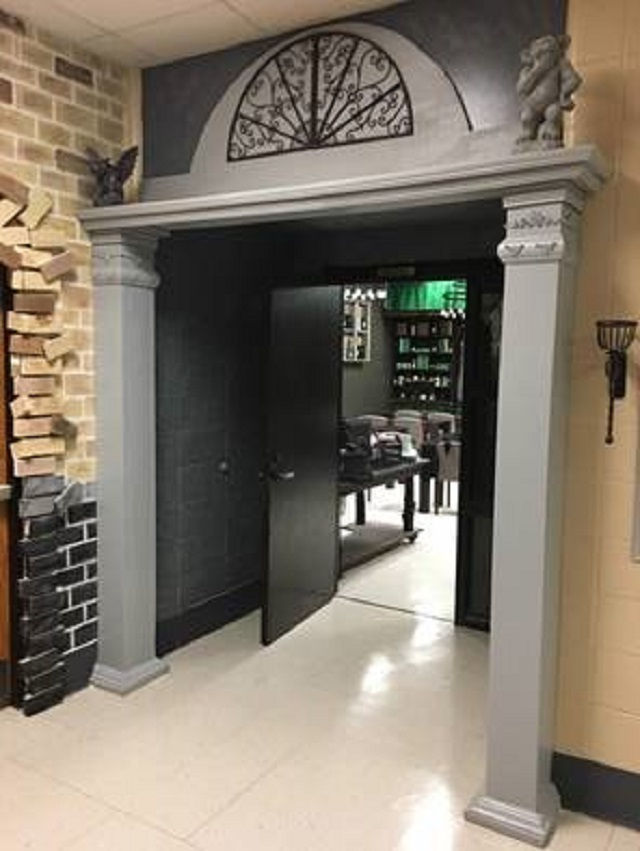 The entrance to Parkside School’s Slytherin-themed classroom sits next to the Diagon Alley-themed entrance. 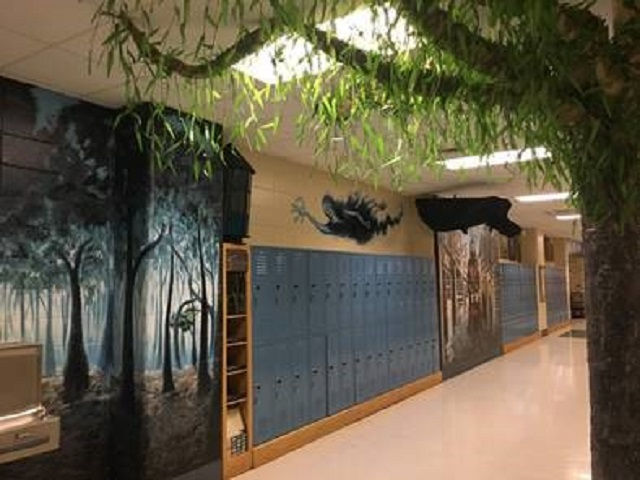 Dementors roam the hallway next to the Forbidden Forest and Whomping Willow. 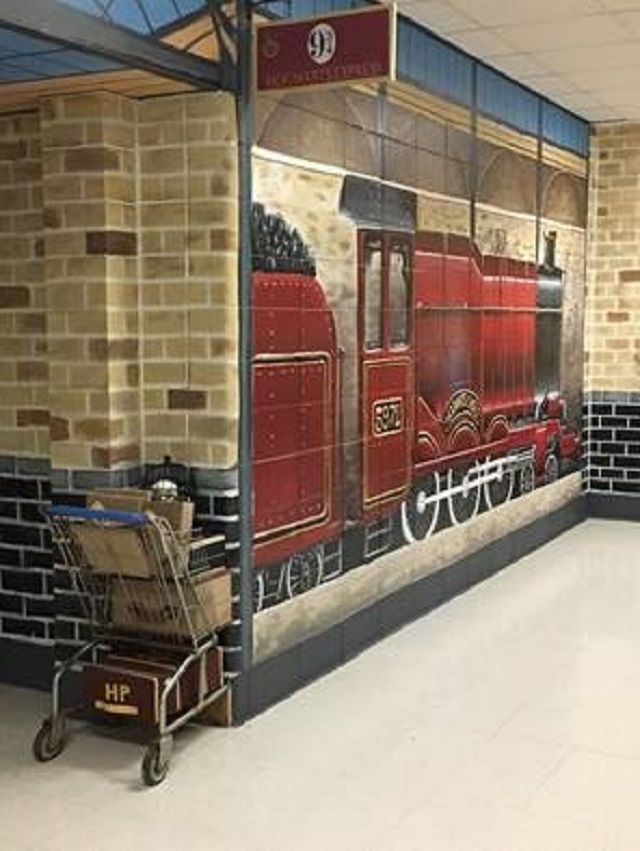 Walk right up to Parkside’s Platform 9 3/4 and the Hogwarts Express. 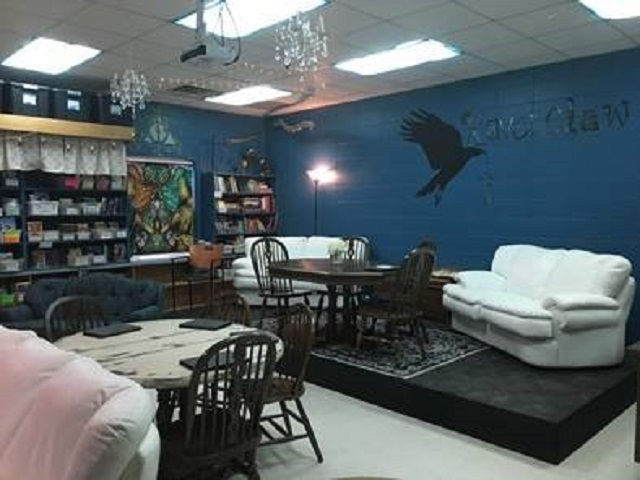 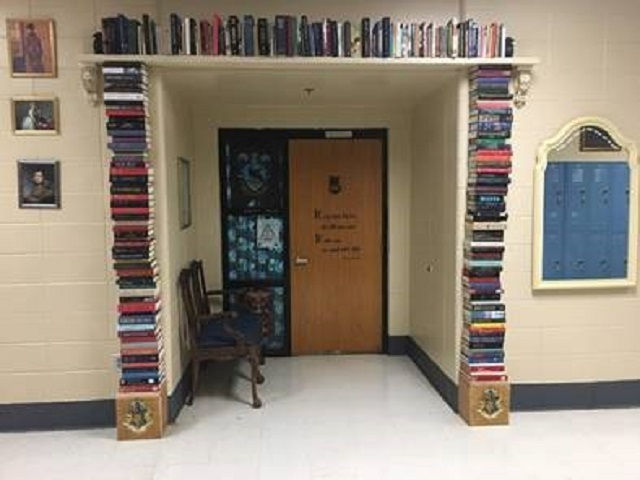 This classroom has an entrance surrounded by books with a glimpse of the portraits lining the hallway. 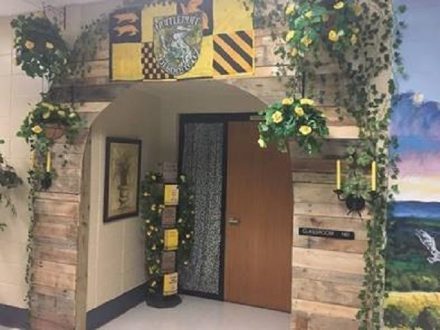 The Hufflepuff classroom entrance is covered in plants, greenery, and natural wood.

We received new images from the event at Parkside School featuring the school and the cast of Fantastic Beasts: The Crimes of Grindelwald. Take a look at them here! 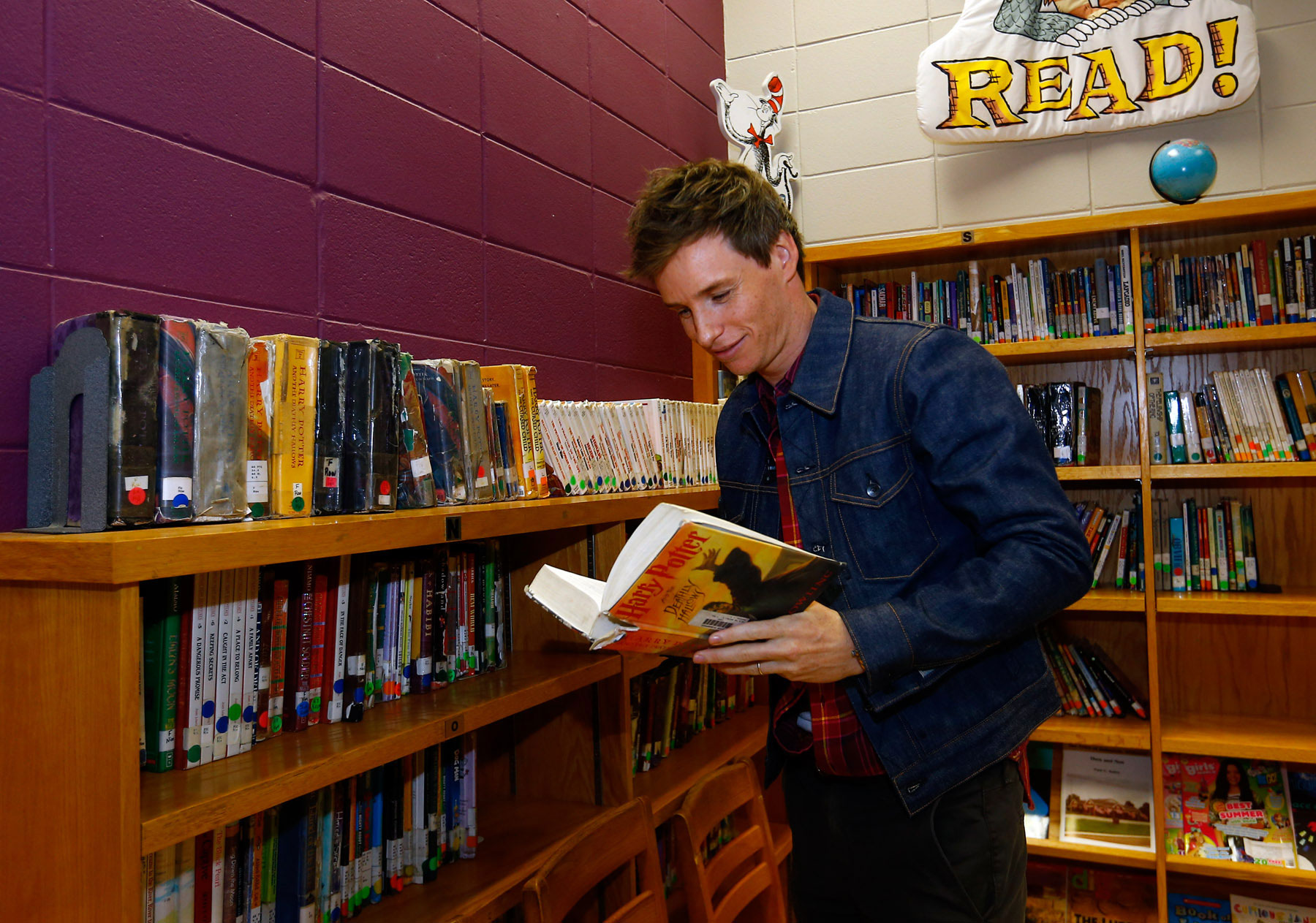 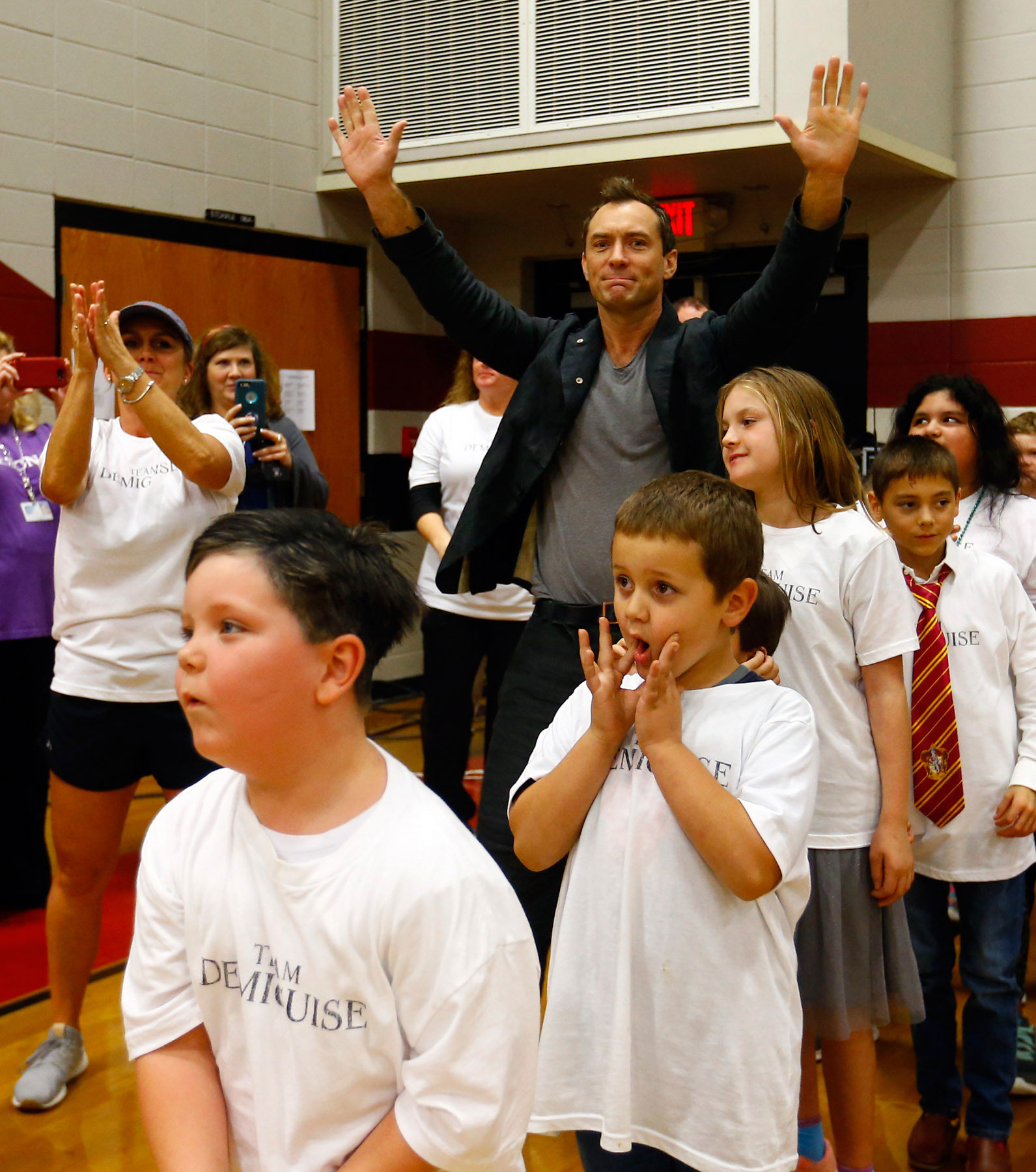 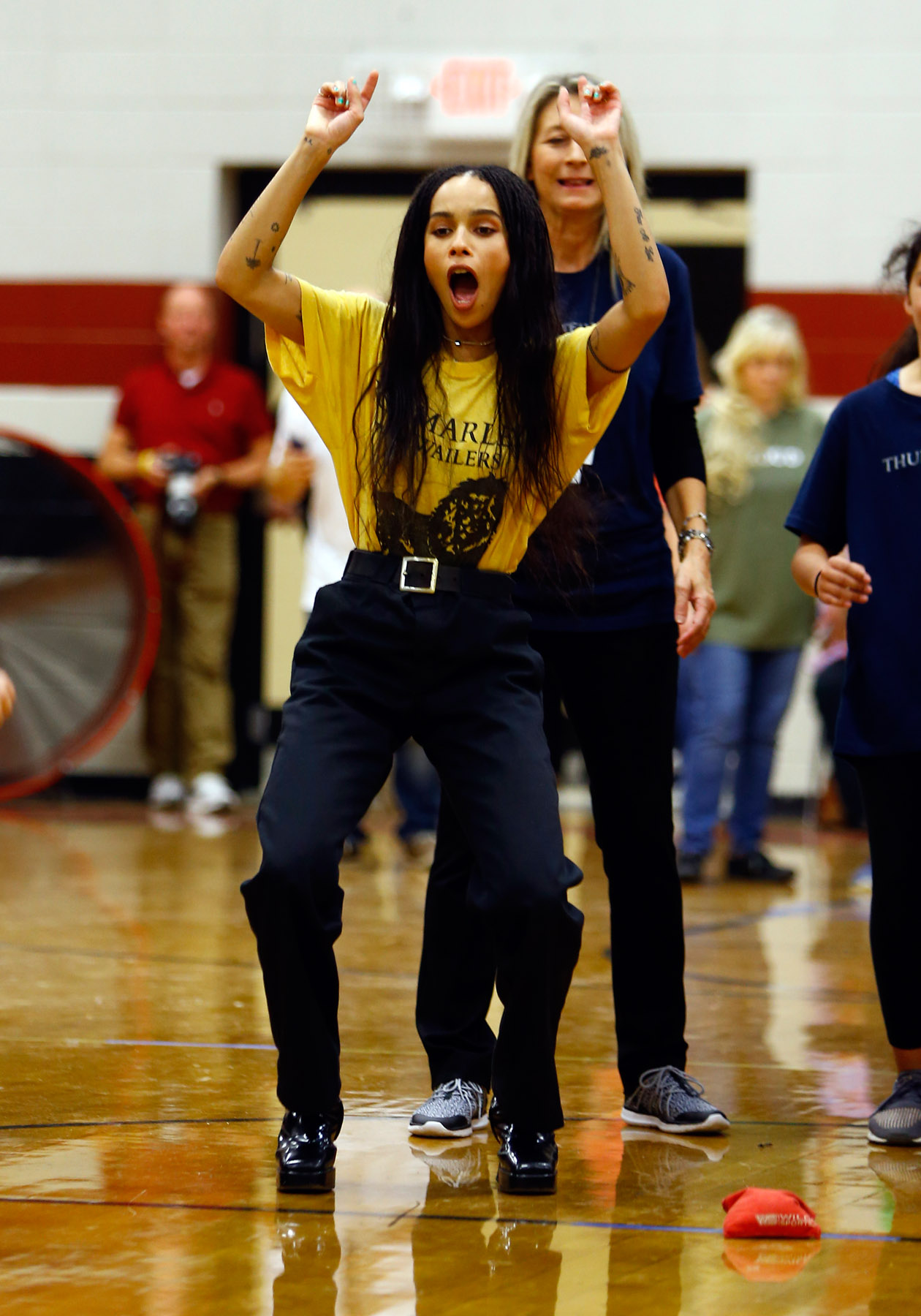 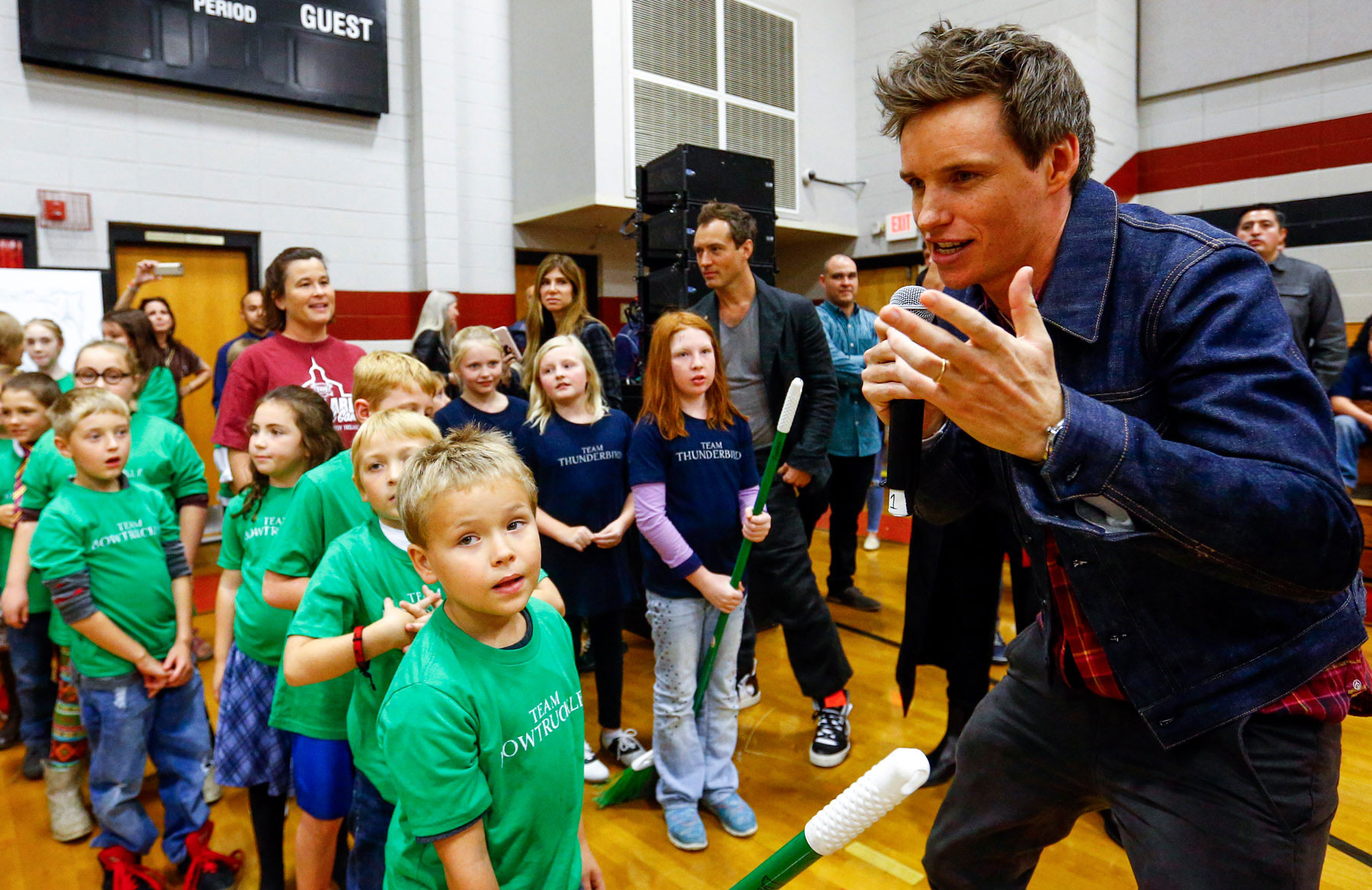 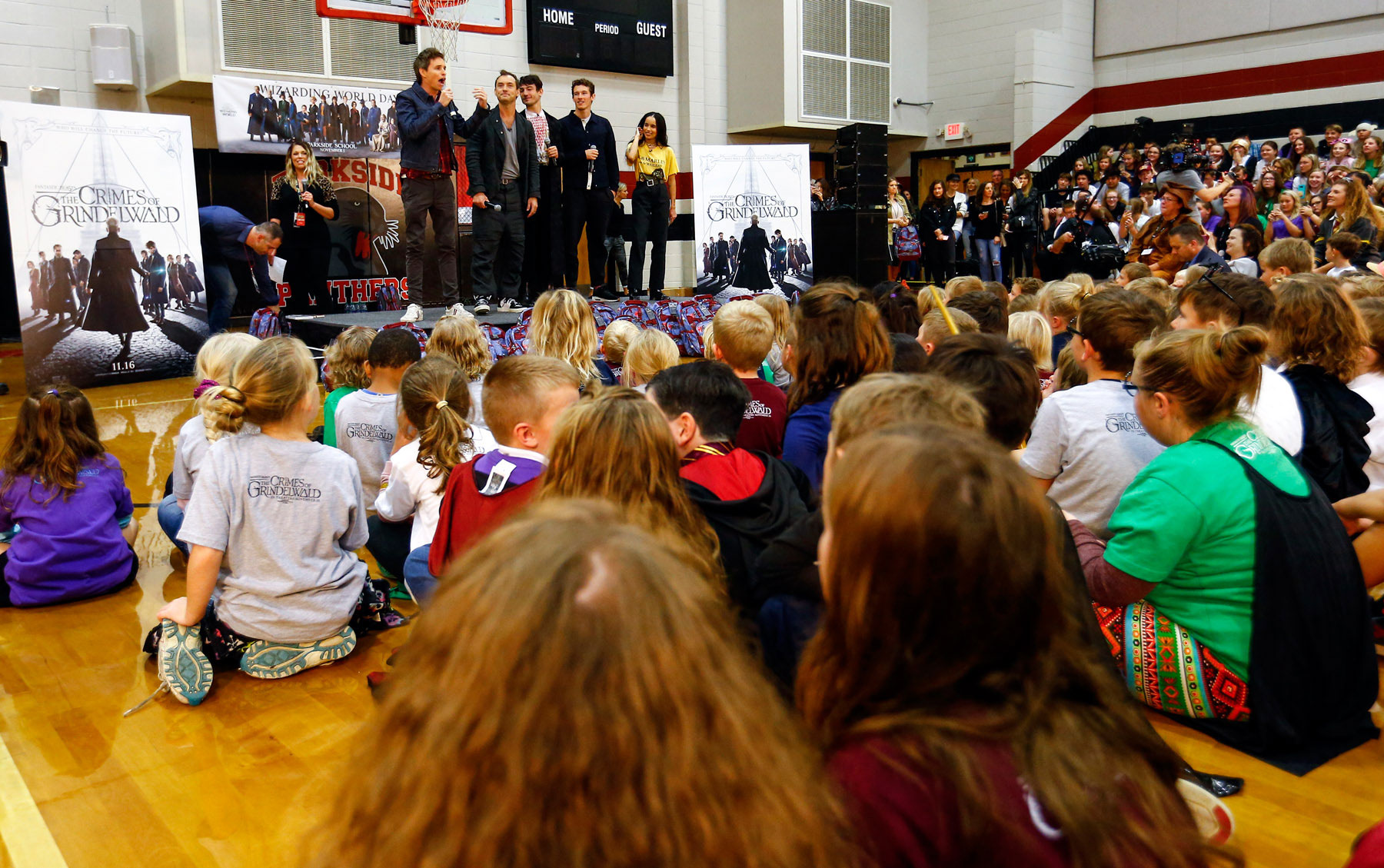 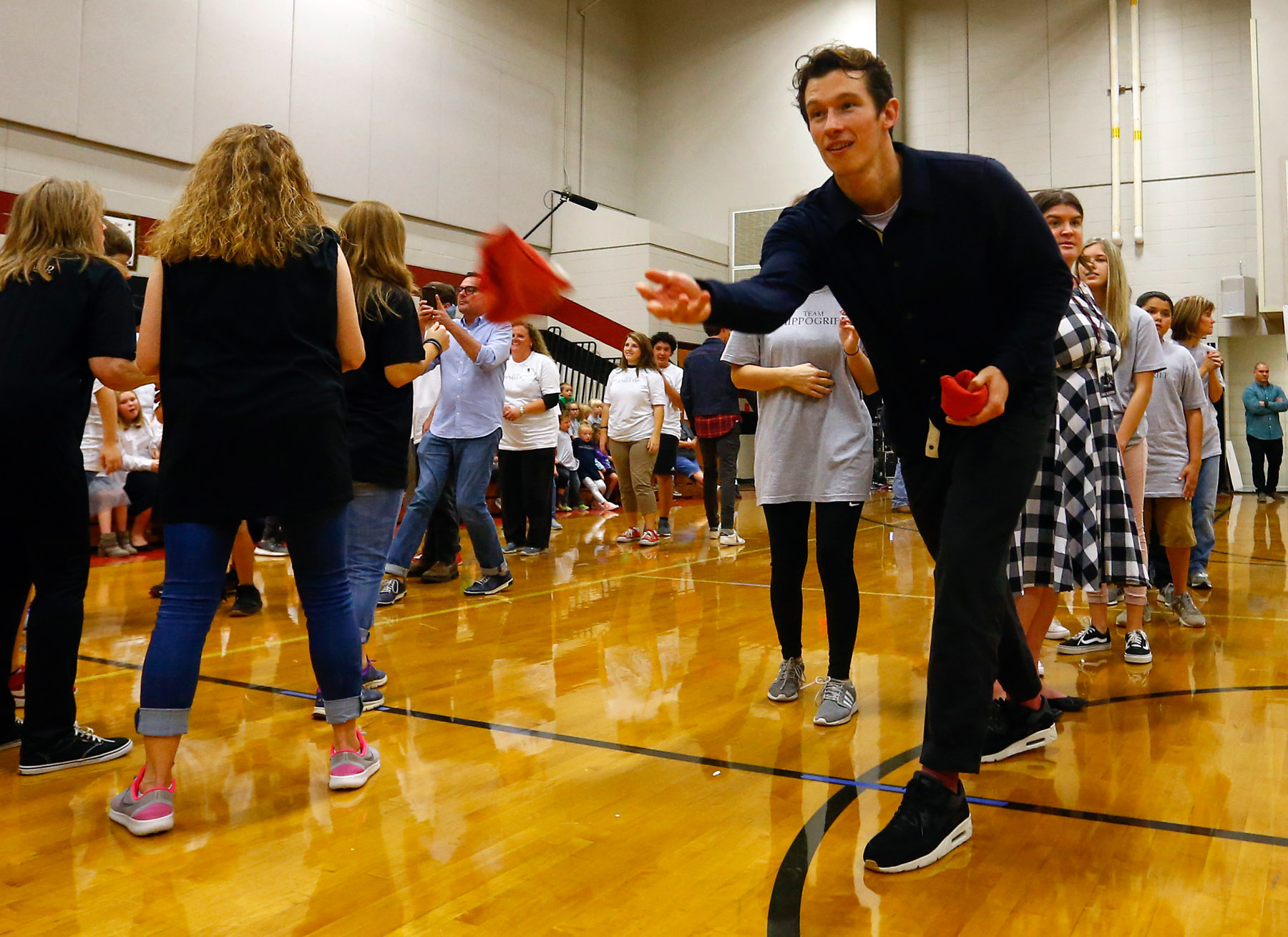 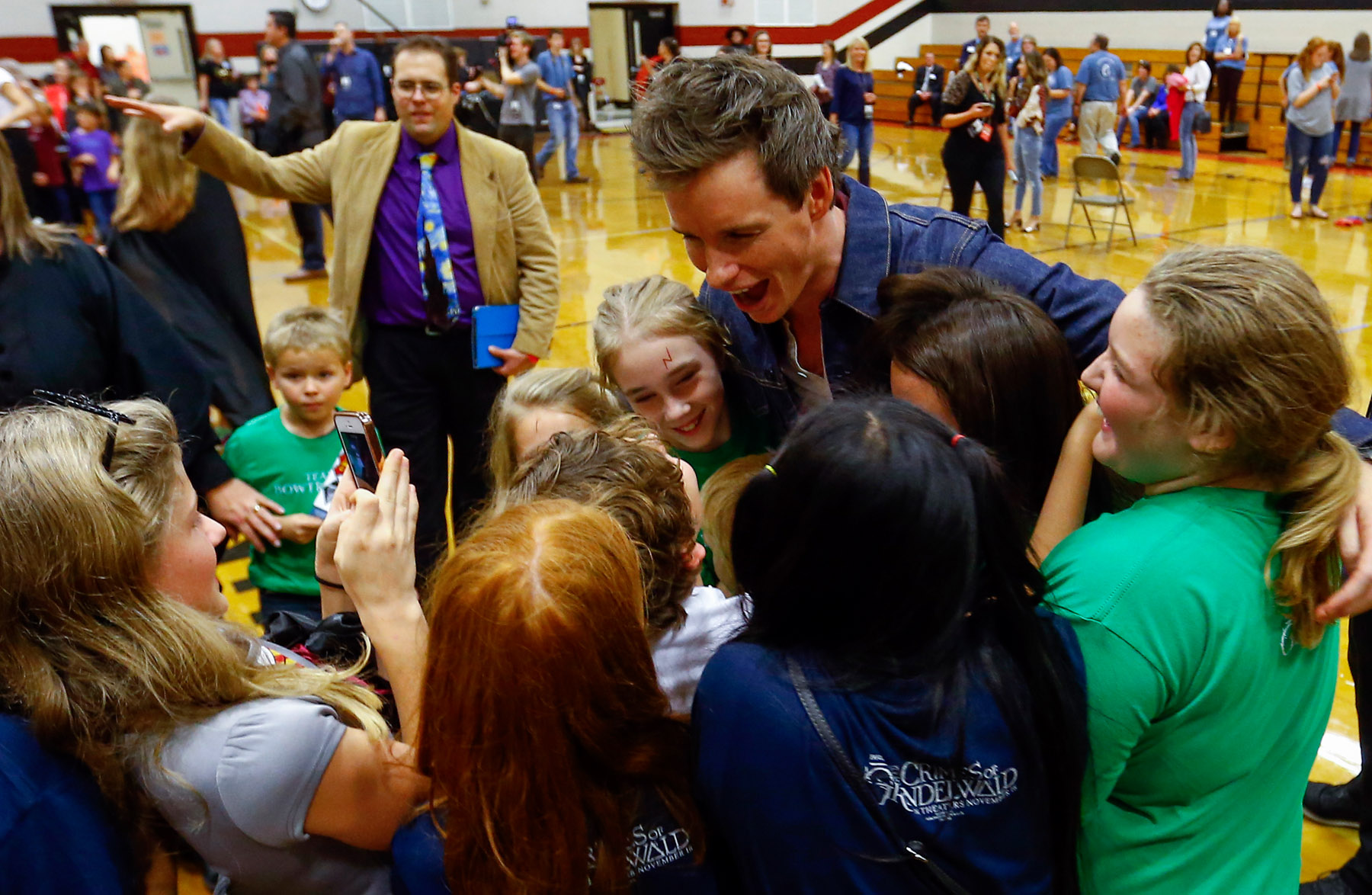 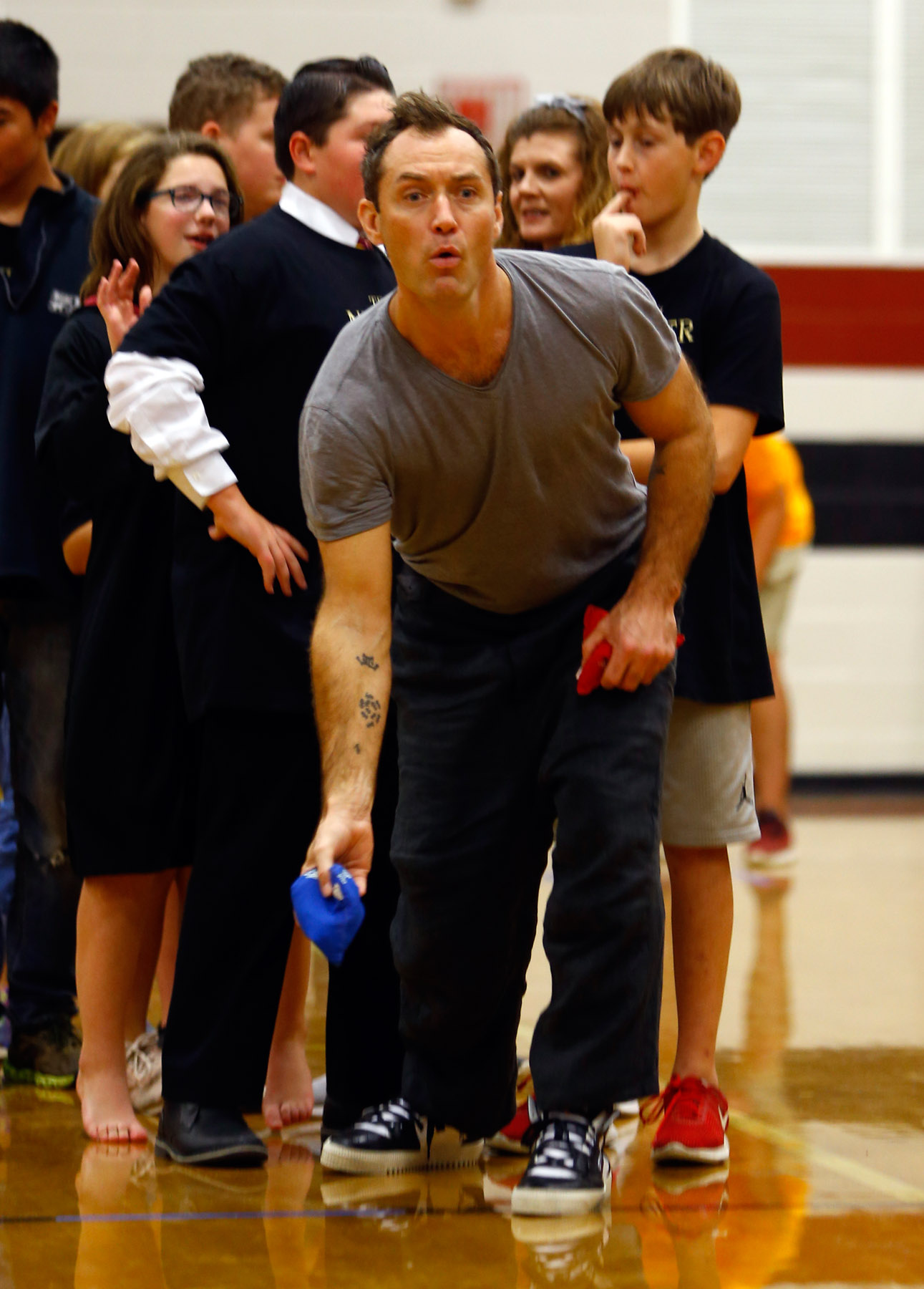 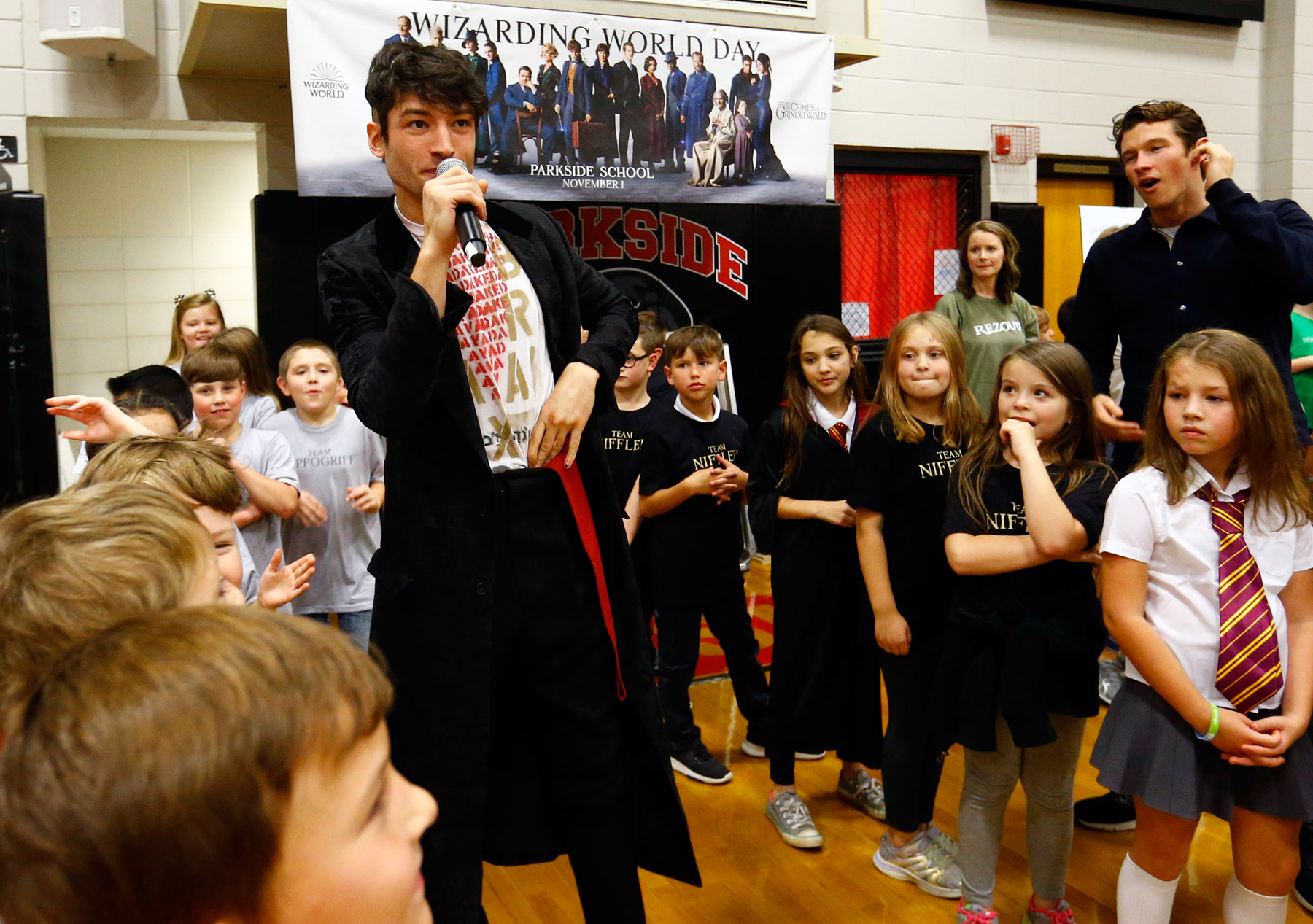 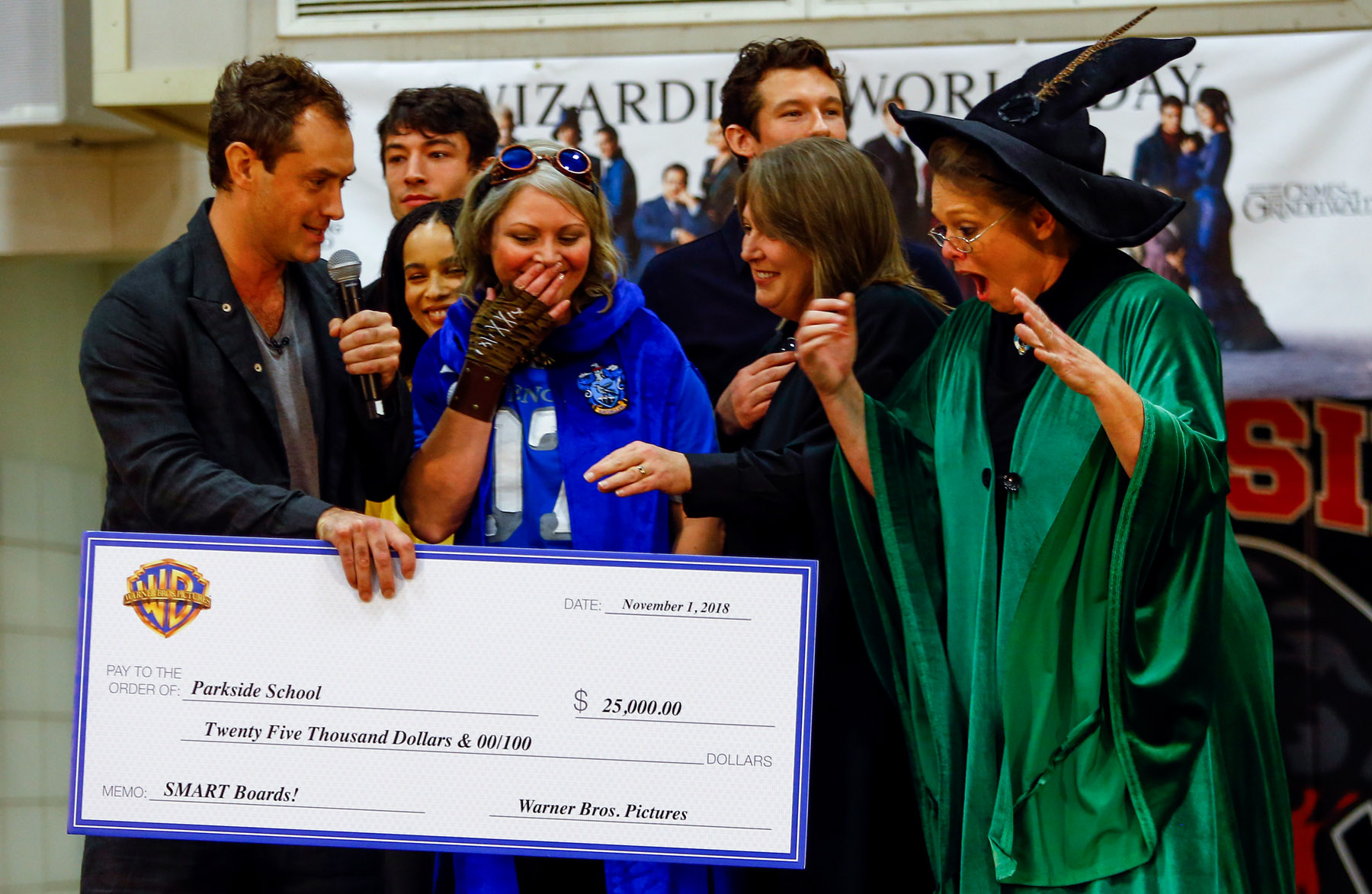 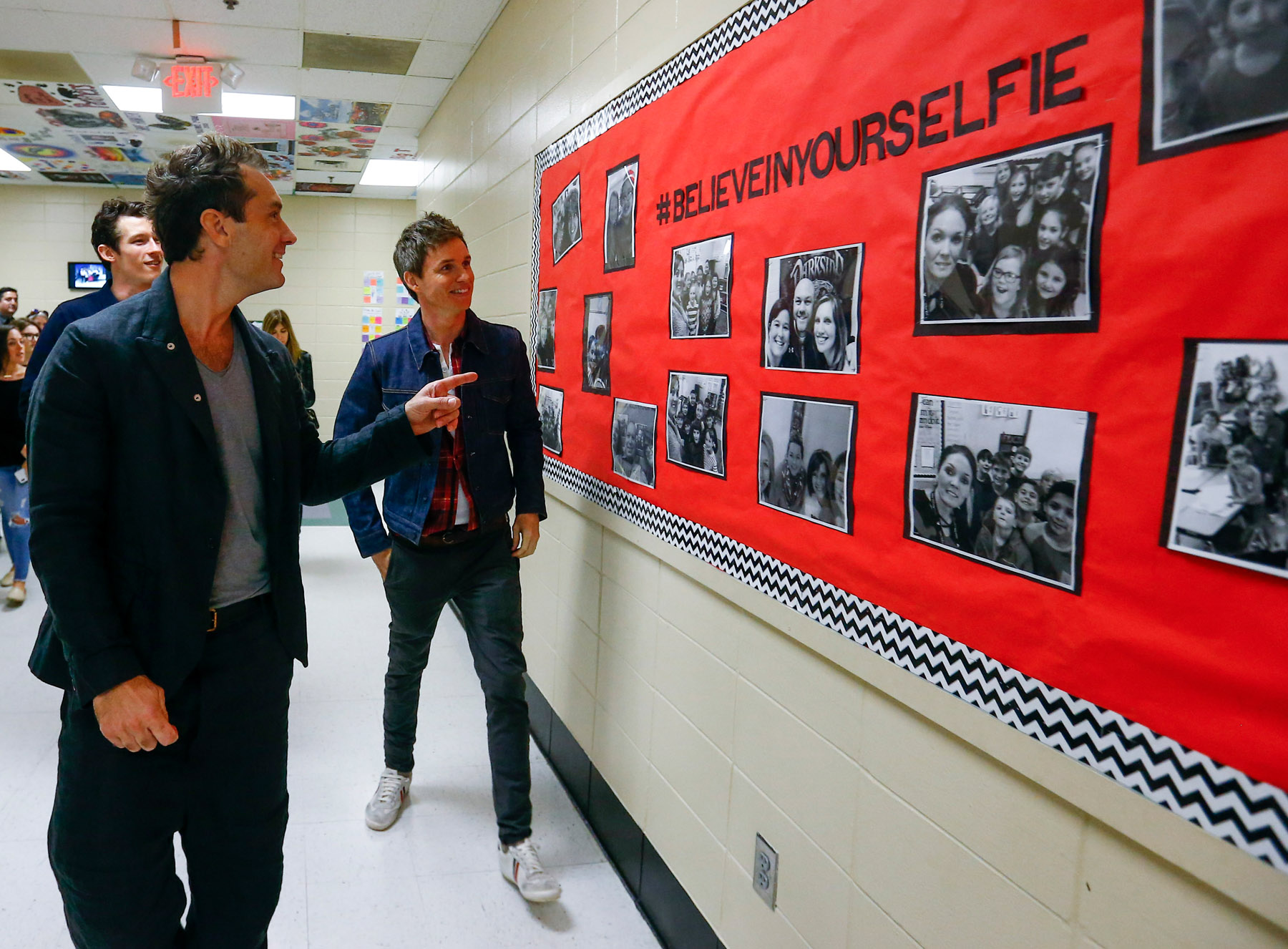 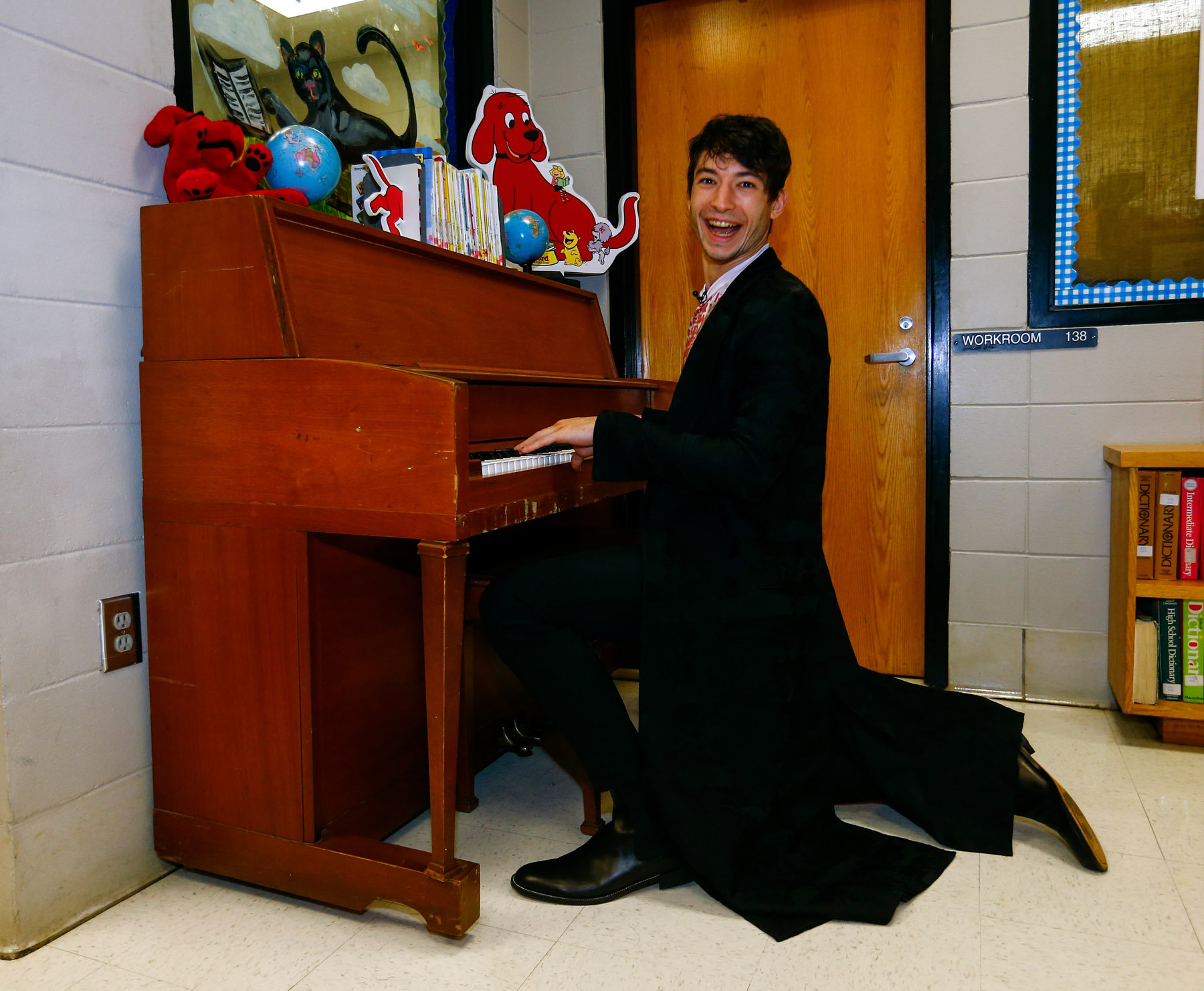 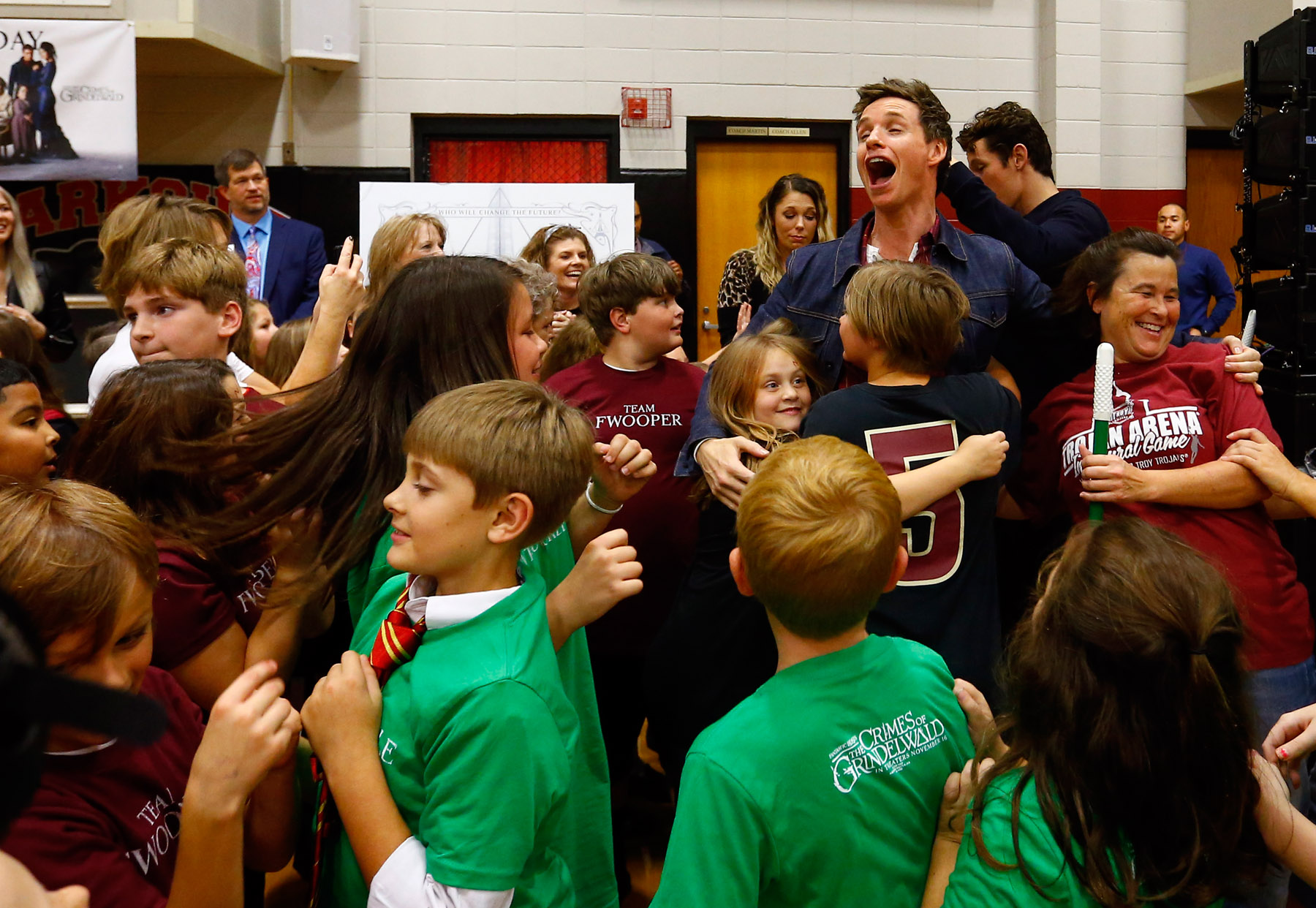 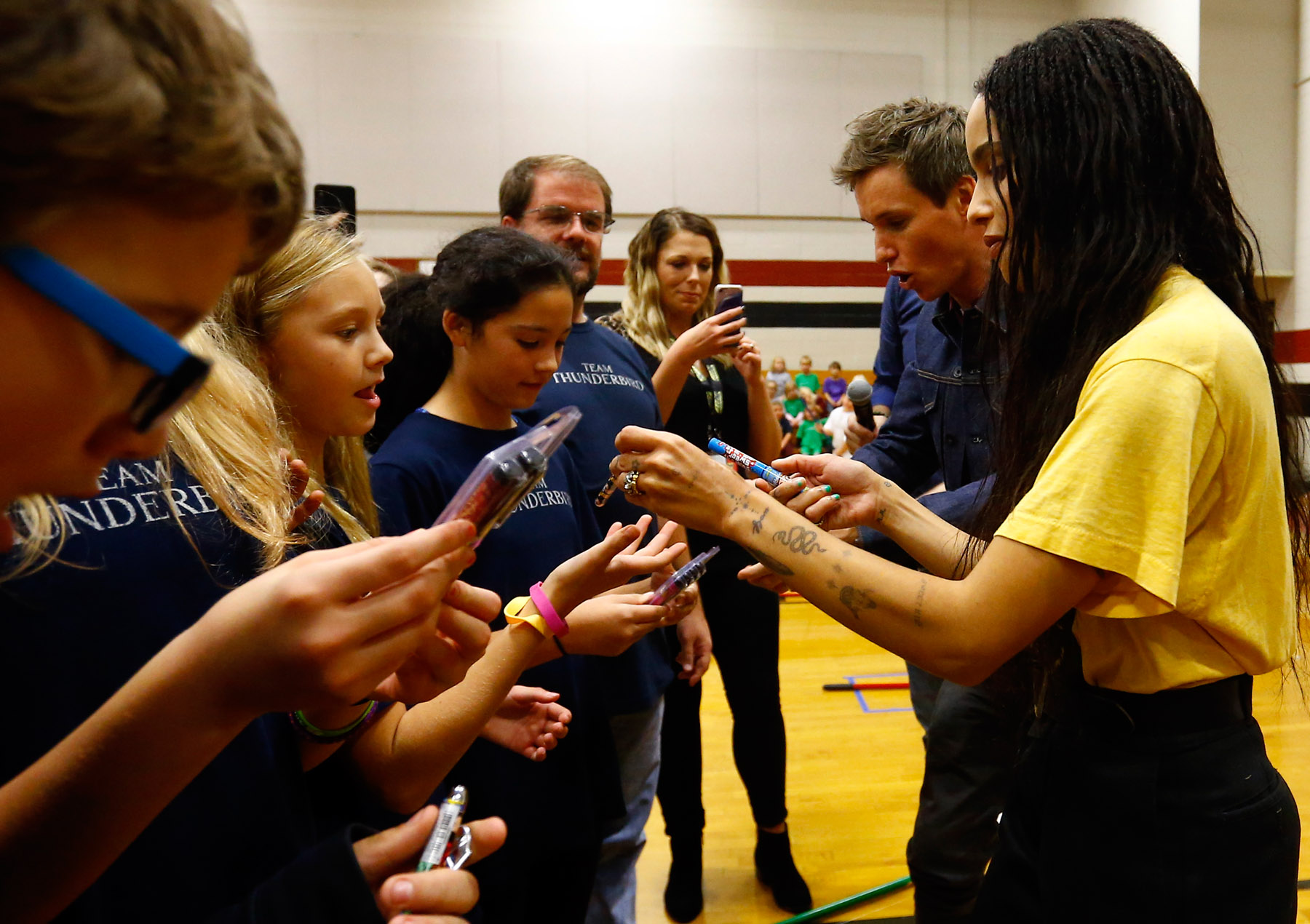 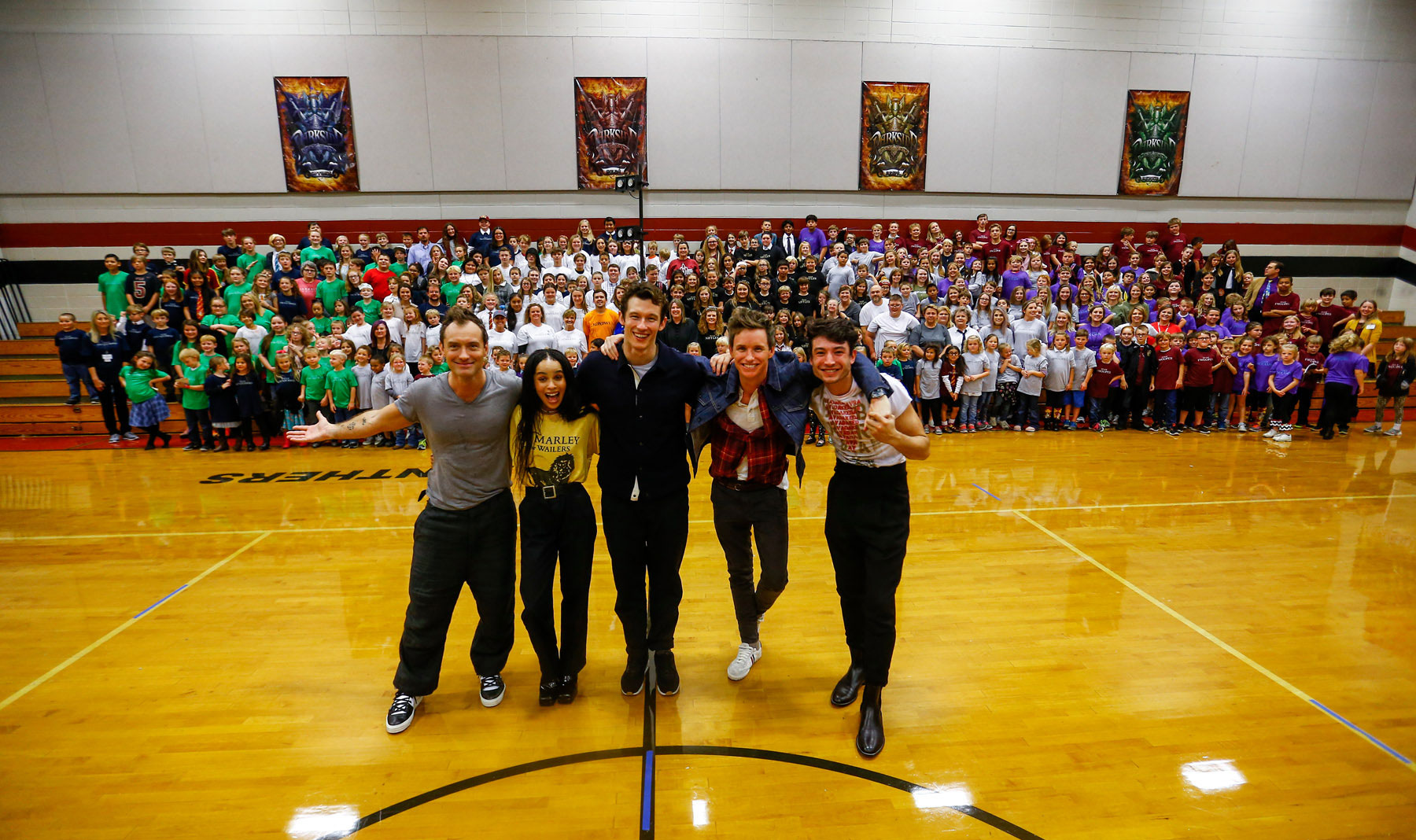 The cast of Fantastic Beasts: The Crimes of Grindelwald spent the day on Thursday, November 1st celebrating the Wizarding World with students and community from Parkside School in Baileyton, Alabama.

The principal, teachers, staff and alumni at Parkside, a title one school in Cullman County, Alabama, transformed classrooms and hallways into the Hogwarts Houses seen in the Harry Potter series, using their own money, raised funds and donated materials to inspire as well as educate their students, and to provide a safe and creative environment for them to grow and learn. To honor and celebrate these educators and their dedication to their students, the cast of Fantastic Beasts: The Crimes of Grindelwald surprised the students and faculty as the school hosted Wizarding World Day full of themed games and lots of excitement.

Warner Bros. Pictures’ Fantastic Beasts: The Crimes of Grindelwald is the second of five all new adventures in the Wizarding World™ created by J.K. Rowling.

At the end of the first film, the powerful Dark wizard Gellert Grindelwald (Johnny Depp) was captured by MACUSA (Magical Congress of the United States of America), with the help of Newt Scamander (Eddie Redmayne). But, making good on his threat, Grindelwald escaped custody and has set about gathering followers, most unsuspecting of his true agenda: to raise pure-blood wizards up to rule over all non-magical beings.

In an effort to thwart Grindelwald’s plans, Albus Dumbledore (Jude Law) enlists his former student Newt Scamander, who agrees to help, unaware of the dangers that lie ahead. Lines are drawn as love and loyalty are tested, even among the truest friends and family, in an increasingly divided wizarding world.

Slated for release on November 16, 2018, the film will be distributed worldwide in 2D and 3D in select theatres and IMAX by Warner Bros. Pictures.

This film is rated PG-13 for some sequences of fantasy action.