Dame Emma Thompson has never been one to shy away from telling the truth. She has been extremely open about her opinions on topics like feminism and climate change. On December 15, she published an article in British Vogue on both issues. More specifically, she wrote about why she believes climate change is, in fact, a feminist issue. If you’re thinking, “What does one have to do with the other?” then you’re probably not alone.

Combining such big topics may feel like a stretch, but just hear Thompson out on this one. You may be surprised to find what you have to learn. 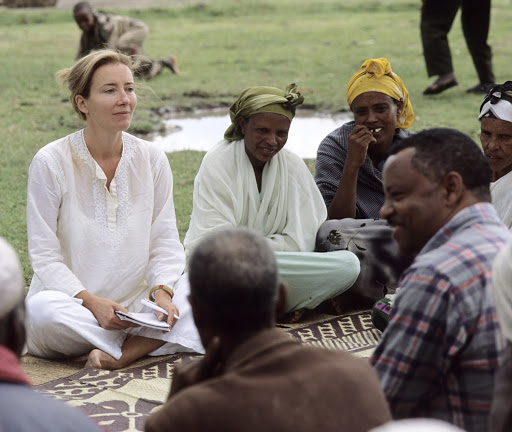 Back in 2004, Emma Thompson traveled to Ethiopia in the wake of a water crisis the region was facing as part of an international charity organization known as ActionAid International, which describes itself as “a global movement of people fighting for women’s rights, social justice and an end to poverty.” When Thompson sat down with a group of local residents, she asked them to describe the conditions under which they were living during the extreme drought. One man talks about the severe lack of food the community has and how, at one point, they were eating “soil mixed with dirty water.” Thompson asked the women to speak up about the hardships they face in the home.

The mothers suffered even more because we had to stay at home; we couldn’t move around to search for food. So we just ate weeds from the garden.

Another woman spoke up:

We used to be beaten by our husbands if we ever left the house for any reason other than to fetch water. Now there is no more beating. We discuss business matters. They know that, together, men and women are stronger. But sometimes they need reminding.

In her article, Thompson says the issues are affecting not only this community in Ethiopia but communities in other regions as well. In Somaliland, tens of thousands are forced to leave their homes when extreme flooding hits. After families in Somaliland were displaced, they lived in camps. These makeshift living communities mean that girls and women are “more exposed to harassment from men.”

Thompson notes that, despite gender inequalities and lack of resources, “Women almost always carry the burden of keeping their families alive and are often the last to eat or drink.”

Unfortunately, the lack of food and water in the camps is not these families’ biggest problem. Women are mostly afraid of an attempt to harm or rape from strange men. A community empowerment and engagement officer for ActionAid Somaliland, who goes by Hibo, says the biggest fear in the camp is rape.

Most of the women have a worry that strangers can come easily in the camp. Because every camp has, like, 3,000 households, it’s a lot. The place is so small. They have no lights, no security checkpoints, so strangers can come easily and try to harm women. So mostly, the first thing they have in their hearts is… fear of rape, attempted rape, and thieves who want to take even the children.

Thieves and abusers are aware that displaced families have little in the way of material goods and will, therefore, target women and girls as a result.

Thompson commented in her article about the resilience of the people she met on her trip to Ethiopia.

They manage with so little, and what they have is important to identify. They have courage, resilience, determination, incredible grit and persistence – I think far beyond our own.

ActionAid continues to bring aid and kits to families in need. The kits provide whistles, flashlights, and cash transfers. Giving money directly to women, Thompson says, allows them to decide exactly what they need for their family, which includes food, water, shelter, and medicine. ActionAid also sets up women’s coalitions, which provide an environment to access resources for victims of abuse.

Emma Thompson asks the world to not only acknowledge these issues but also participate in bringing change to these communities. For more information on ActionAid, you can visit its website at actionaid.org.