On February 6, witches and wizards across the world celebrated Harry Potter Book Night, an event that brings fans together to celebrate their favorite series. This was the sixth year of the event’s history, and the theme was the Triwizard Tournament. 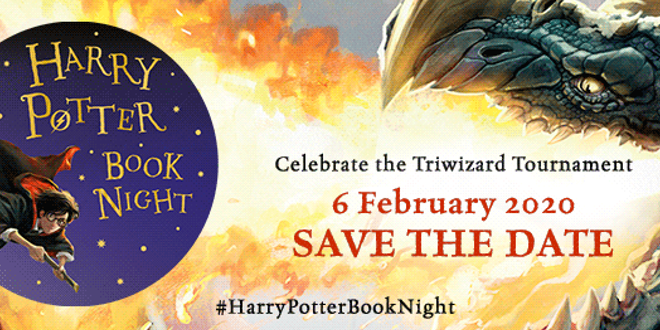 You know you're in for a magical night when you're greeted at the door of your local library by witches, wizards, and witches and wizards trying really hard to dress like Muggles! 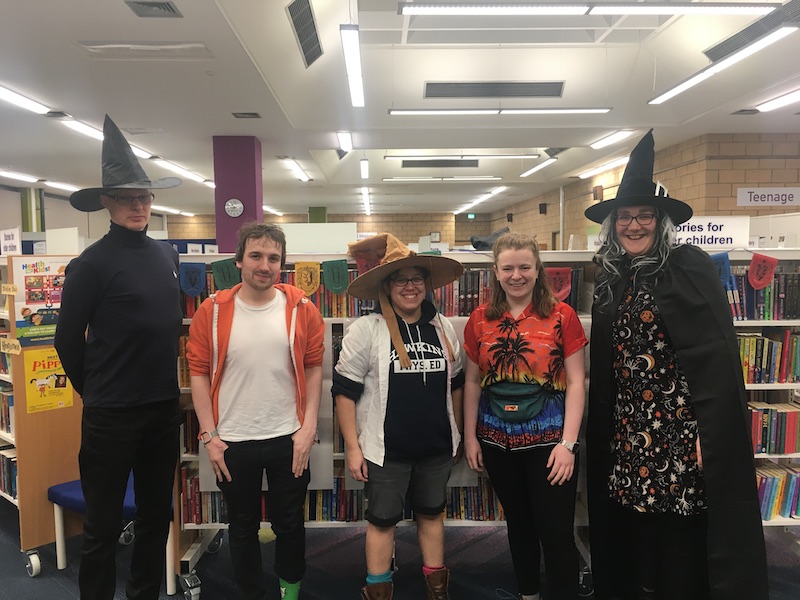 There were two Harry Potter Book Night events at St. Albans Library. Earlier in the day, children had attempted to pin the sock on Dobby and throw their names into the Goblet of Fire from behind the Age Line. The later event (for grown-ups only) featured an intense multi-round quiz, butterbeer, and use of the library's CreatorSpace. The library itself was also dressed for the occasion, with House crest bunting, wizarding world signage, a Goblet of Fire, and even a Voldermort in a bobble hat. 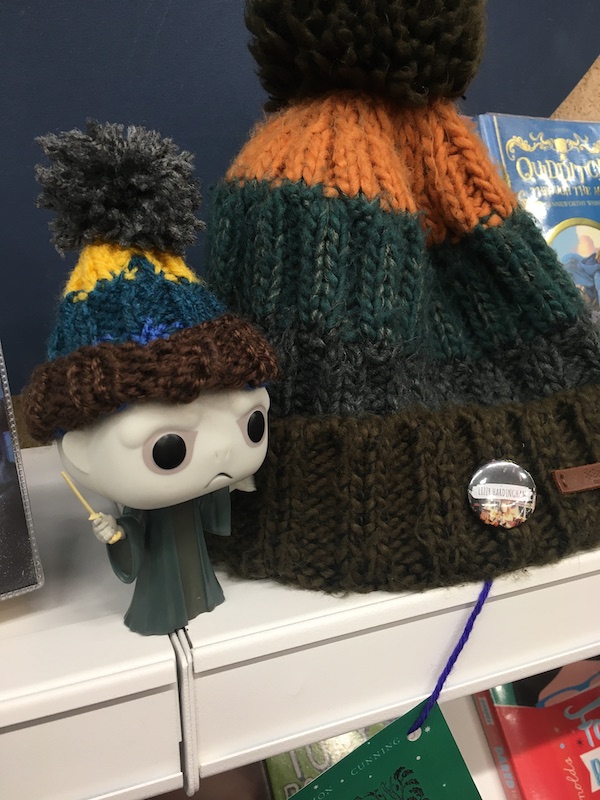 Even Voldermort got dressed up for the occasion. 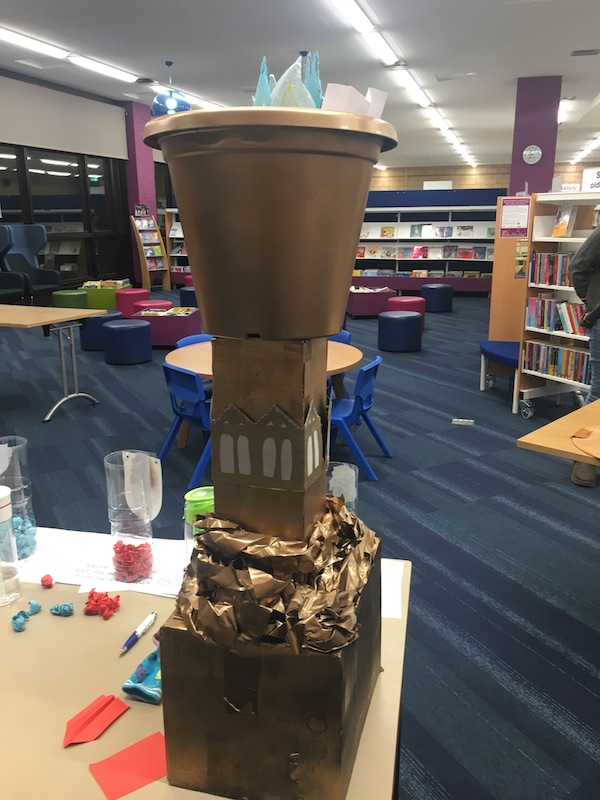 The staff at the library had constructed their own Goblet of Fire.

To earn points, three teams competed in quiz rounds such as "Life at Hogwarts," "Harry Potter by Numbers," and "Who Said What." This was alongside an enormous Harry Potter word search that contained over 50 character names, a picture round, and a Triwizard Tournament-themed crossword. A round of Harry Potter Dingbats threw up some hilarious answers, and everyone was stumped by the clue for the Quidditch team, the Appleby Arrows.

In the CreatorSpace, teams took part in a drawing challenge round and a magical photo opportunity. For the challenge, each team had to draw the Hogwarts crest from memory, with team members getting 15 seconds at a time to add their contribution to the drawing. Combining memory recall, teamwork, and time pressure, this challenge was much harder than it seemed! After that, we made use of the technology of the CreatorSpace, taking photos against a green screen with our very own invisibility cloak. 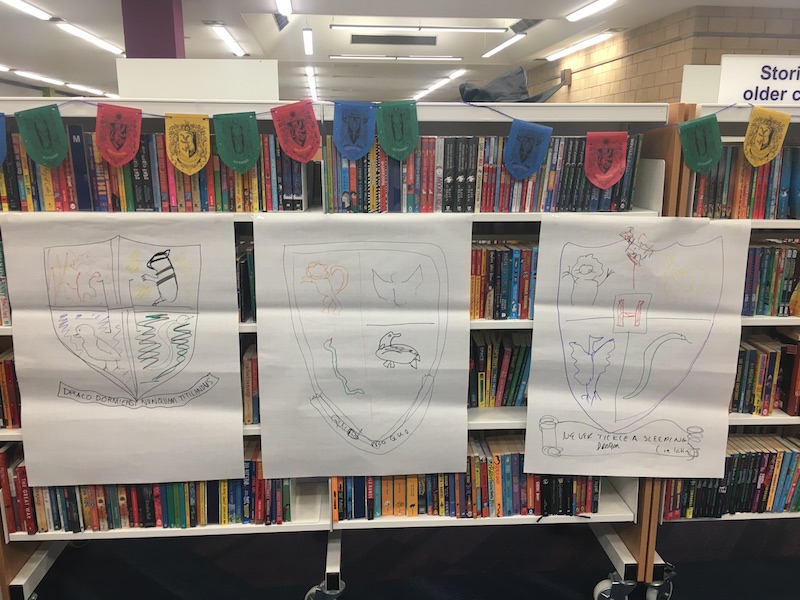 While my team did win the quiz (go Team Buzz Kill!), the best part of the night, by far, was spending time with people who are passionate about Harry Potter. As someone who is fairly new to the area, this event allowed me to make connections with other local people through our shared interest in the wizarding world. A lot of the fandom is based online, and it was wonderful to spend a night with other fans IRL while supporting a vital community resource. Thanks, St. Albans Library, for a magical Harry Potter Book Night!

While the event was billed as being for all ages, it was certainly focused on the kids. Much to my pleasant surprise, they had come in droves. The vast majority of them were dressed in Hogwarts robes for the occasion! (Being that it is winter in Canada, I can assure you that I didn't have the same level of commitment.)

The activities were set up in the children's section of the library, and completing two activities would give participants the opportunity to try a Bertie Bott's Every Flavour Bean. (Of course, as the librarians cautioned, this didn't guarantee that it would be a good flavor!) There was no shortage of activities either: 3D puzzles from Wrebbit, pipe cleaner wands, a House-themed button-making station, and even a green screen for photos.

My favorite part of the activities on offer was that the library worked to incorporate Canada's bilingualism. One of the activities was a Fantastic Beasts trivia sheet, but it was entirely in French. I would have loved something like that when I was learning French in school, and it seemed to be a big hit with the kids!

Keeping that in mind, I would have loved to see a take on this year's theme, focused on the Triwizard Tournament. Given the diversity of the Greater Toronto Area, I think that it would have worked really nicely. All in all, though, the Bathurst Clark Resource Library put on a magical event, and the library staff certainly know how to get young readers interested in the Harry Potter series! 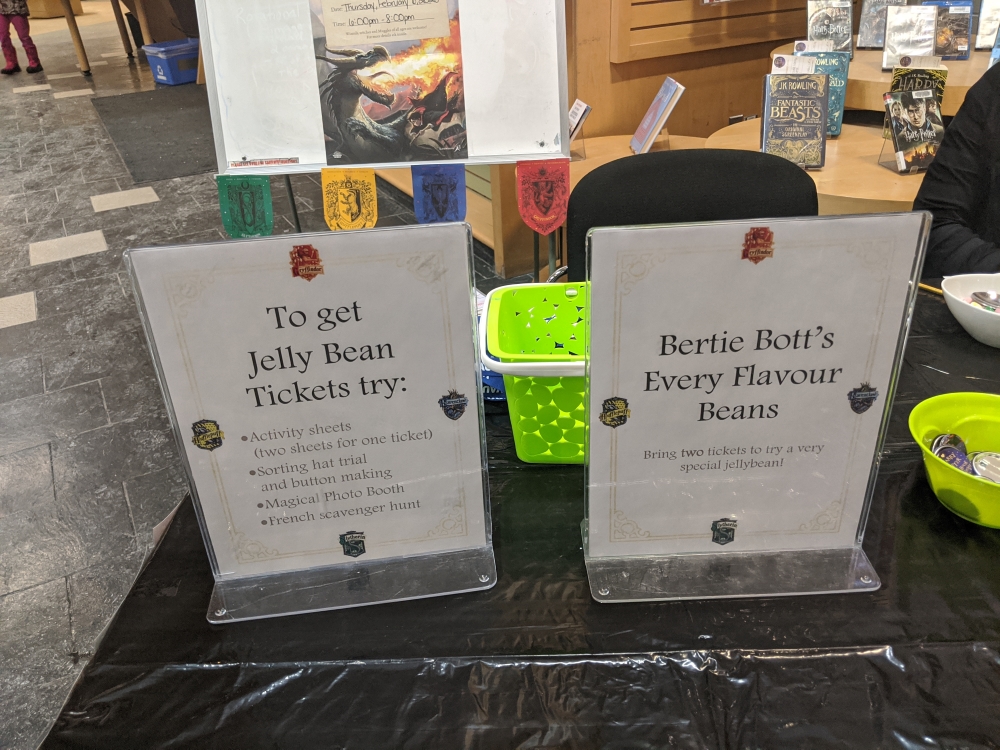 Participants were given guidelines on how to earn a Bertie Bott’s ticket. 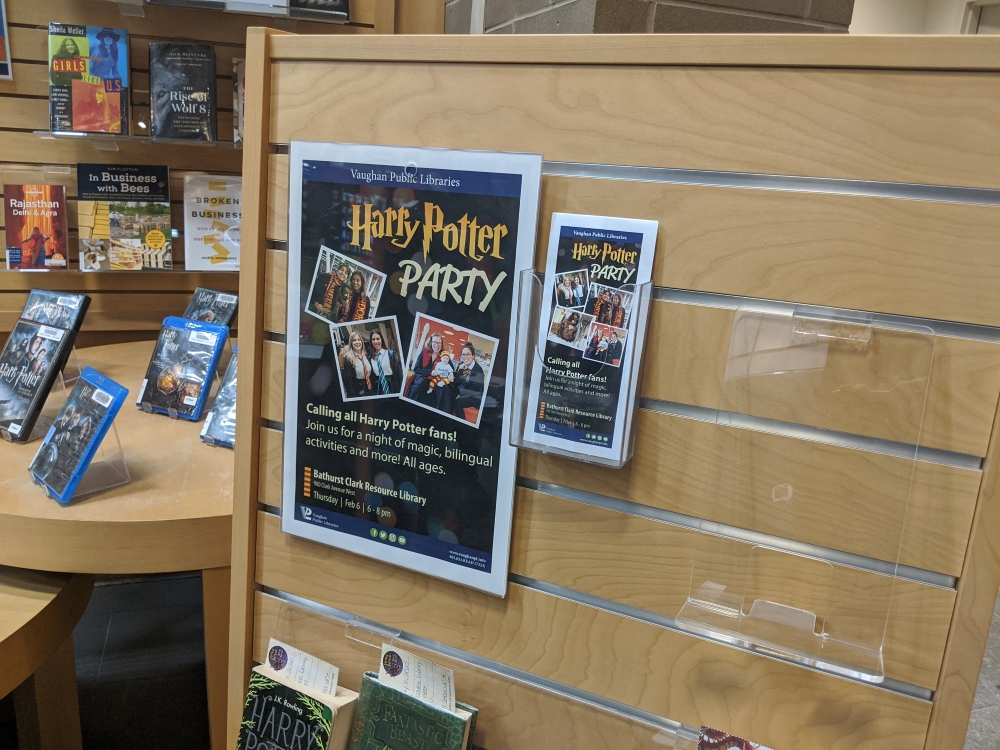 The poster for the event was also on display. 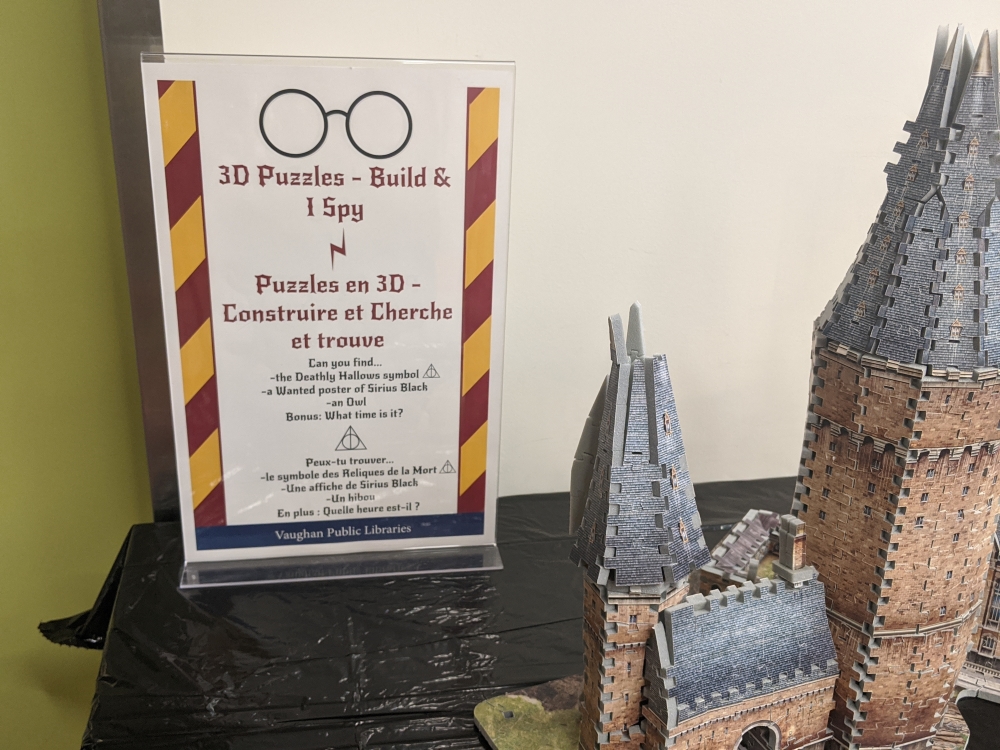 Activities included 3D puzzles and a game of I spy for participants. 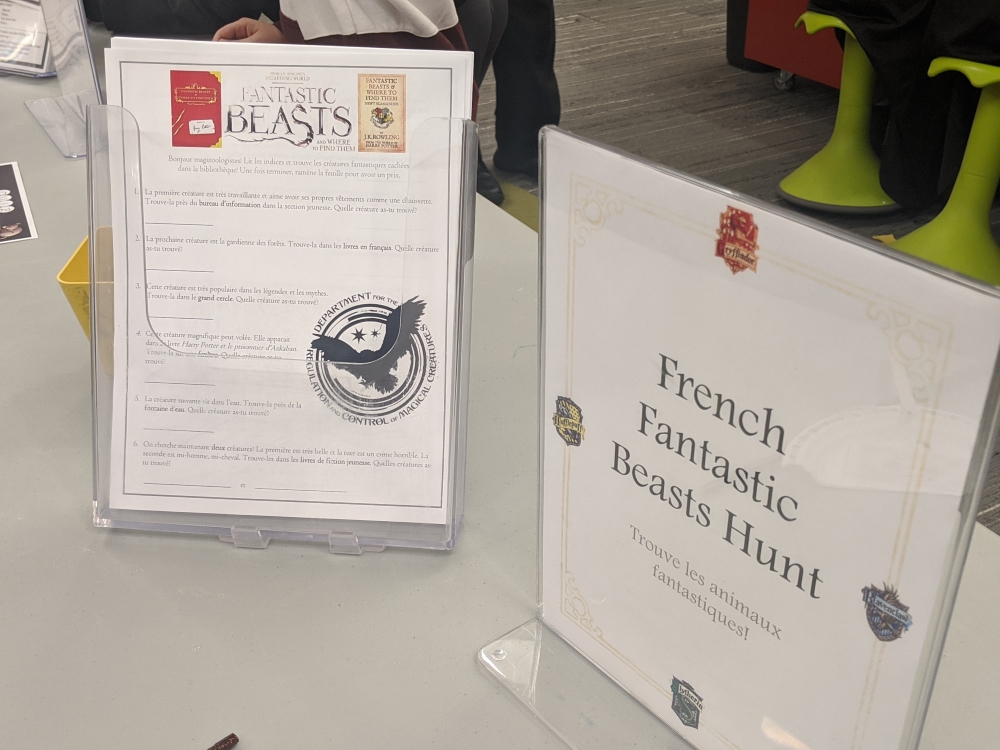 "Reach into the Sorting Hat!" said the kindly lady in the Gryffindor scarf. "You'll find out which Triwizard champion you are."

"Oh no!" the young boy exclaimed, frowning at the card in his hand. "Cedric?" 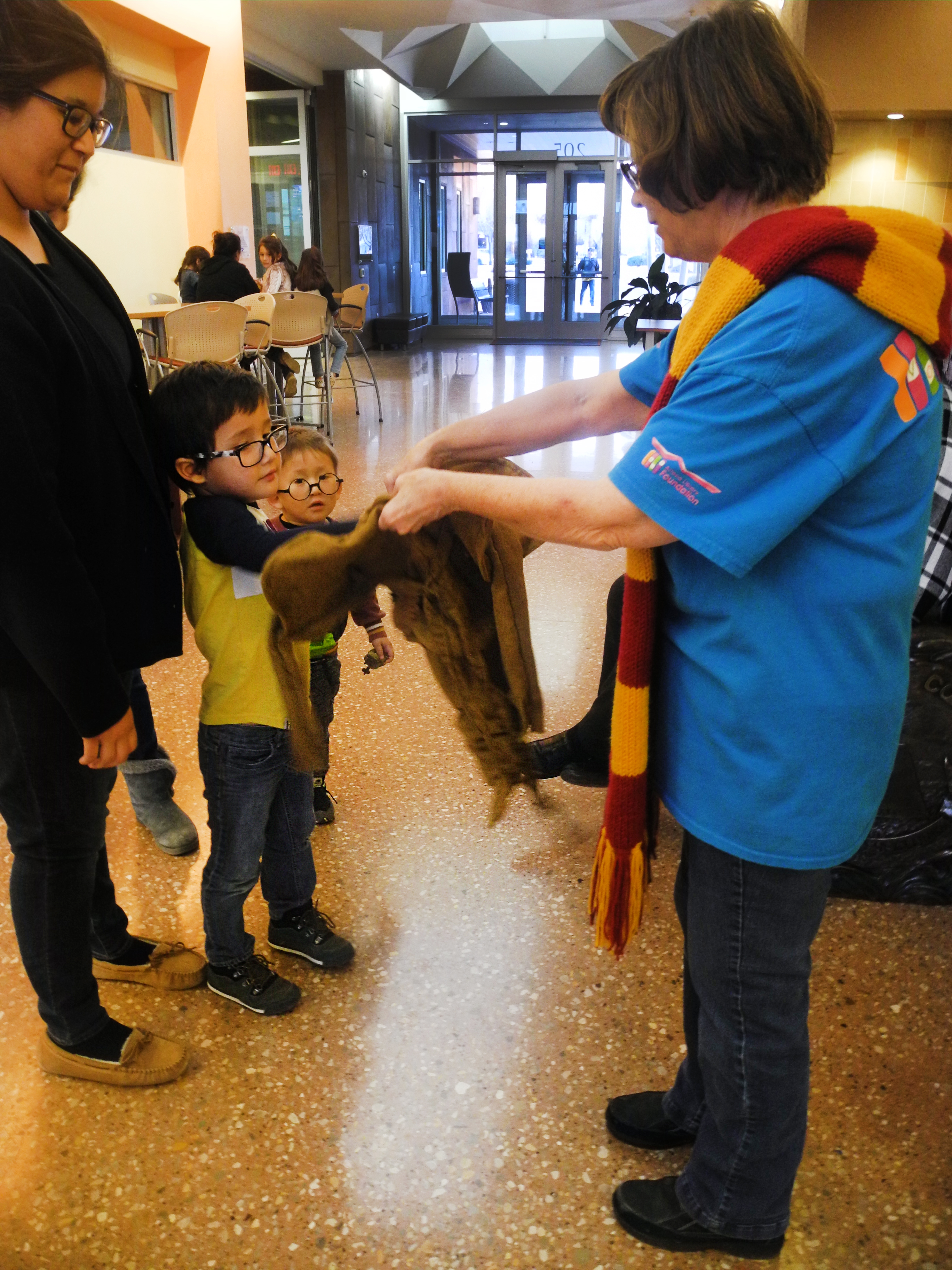 While several children may have started their Harry Potter Book Night experience at the Artesia Public Library in Artesia, New Mexico, thinking the Triwizard Tournament wasn't going to end well for them, their concerns were quickly allayed as they stepped into a Voldemort-free evening of games, crafts, and snacks.

After assuming their new identities, kids were ushered to an obstacle course they navigated by broom, receiving a lightning-bolt scar tattoo as a prize. At the button-crafting table, they could create a badge declaring their support for their favorite champion or simply have their own custom design made into a memento. Completing a dragon craft earned participants a pair of Harry Potter glasses. 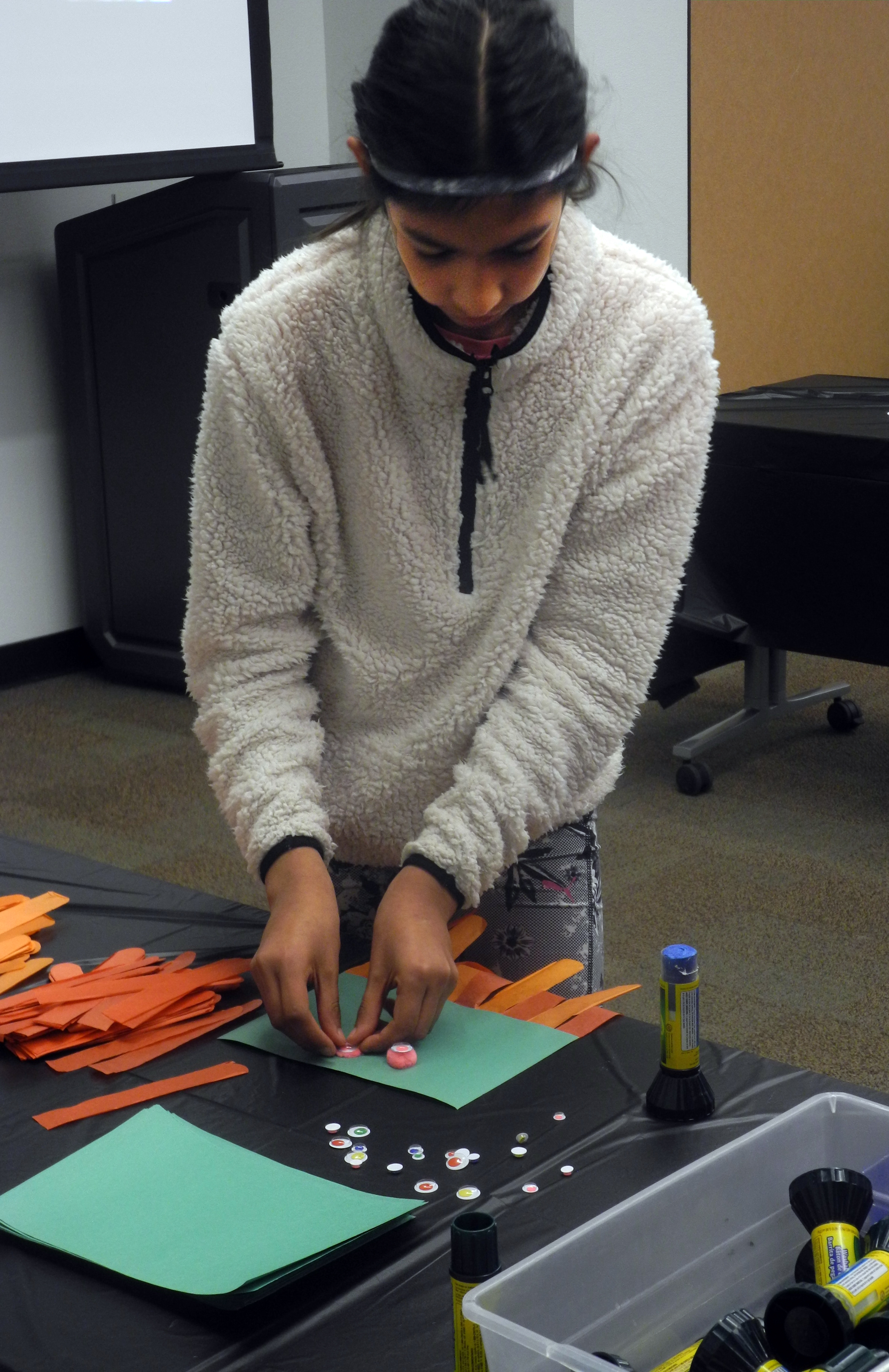 Then it was out into the hall for a visit to the refreshment table, which featured Polyjuice Potion, broomsticks made of pretzels and peanut-butter cups, Bertie Bott's Every Flavour Beans, and more. 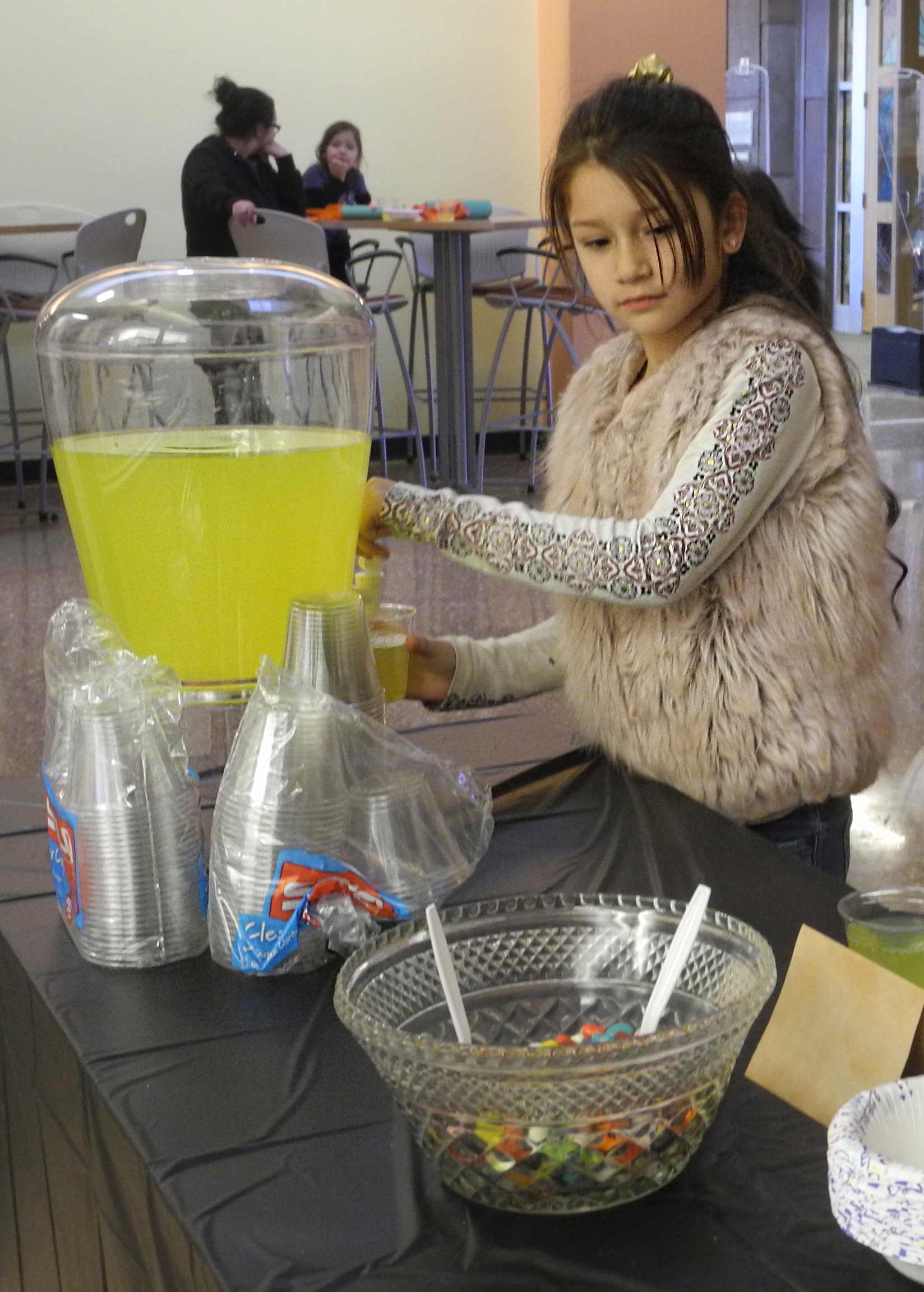 But more significant than the activities was what the evening meant to the children in attendance. It was evident in the eyes of the toddler imagining himself to be the boy wizard before "taking flight" on his broom. 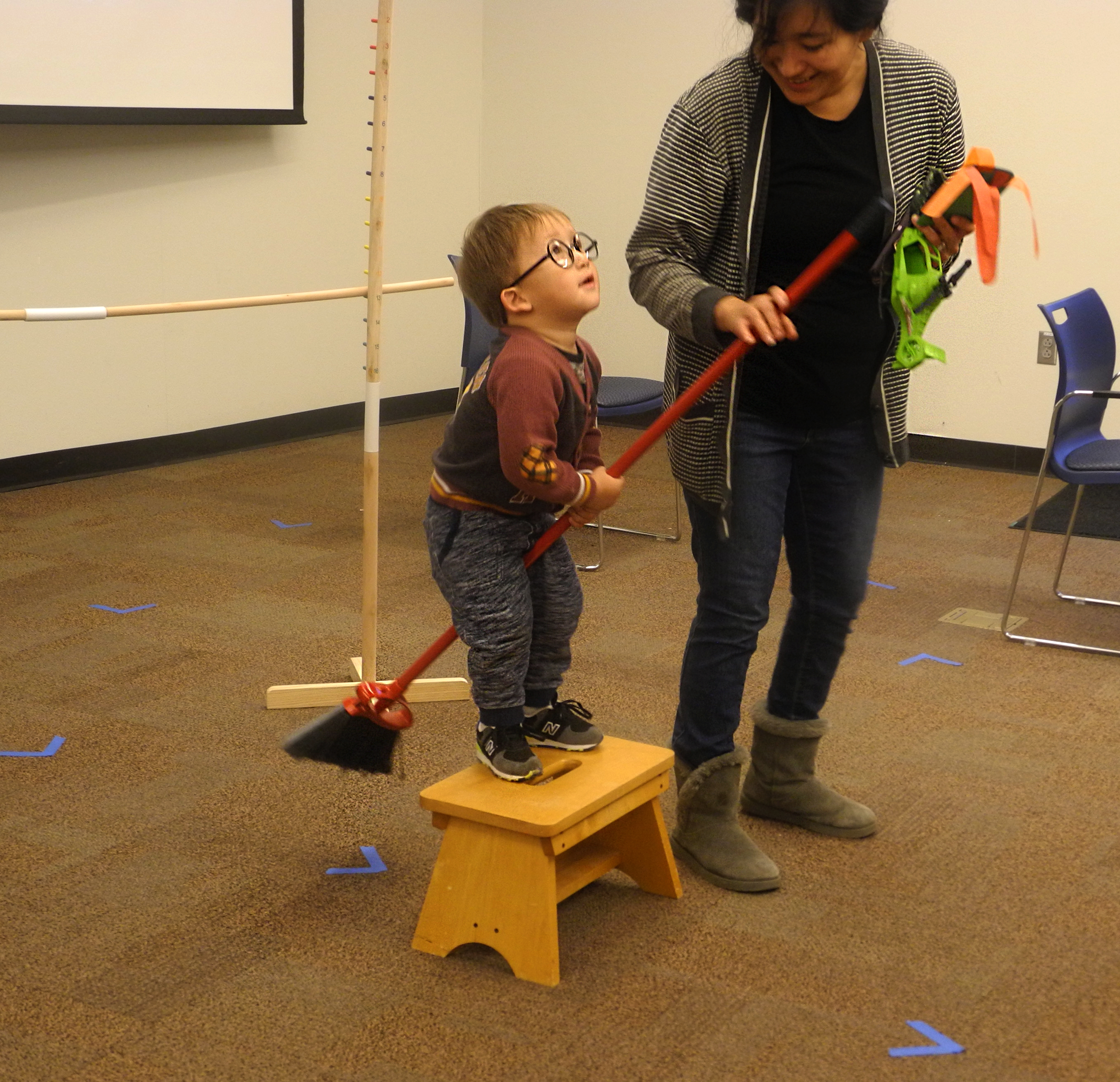 At the snack table, a little girl giggled excitedly as she created "Niffler Munch" by combining the available treats. A pair of preteens quoted Albus Dumbledore verbatim while daring one another to try various Bertie Bott's beans. Fathers spent quality time with their children, helping them glue pom-pom eyes onto their dragons. 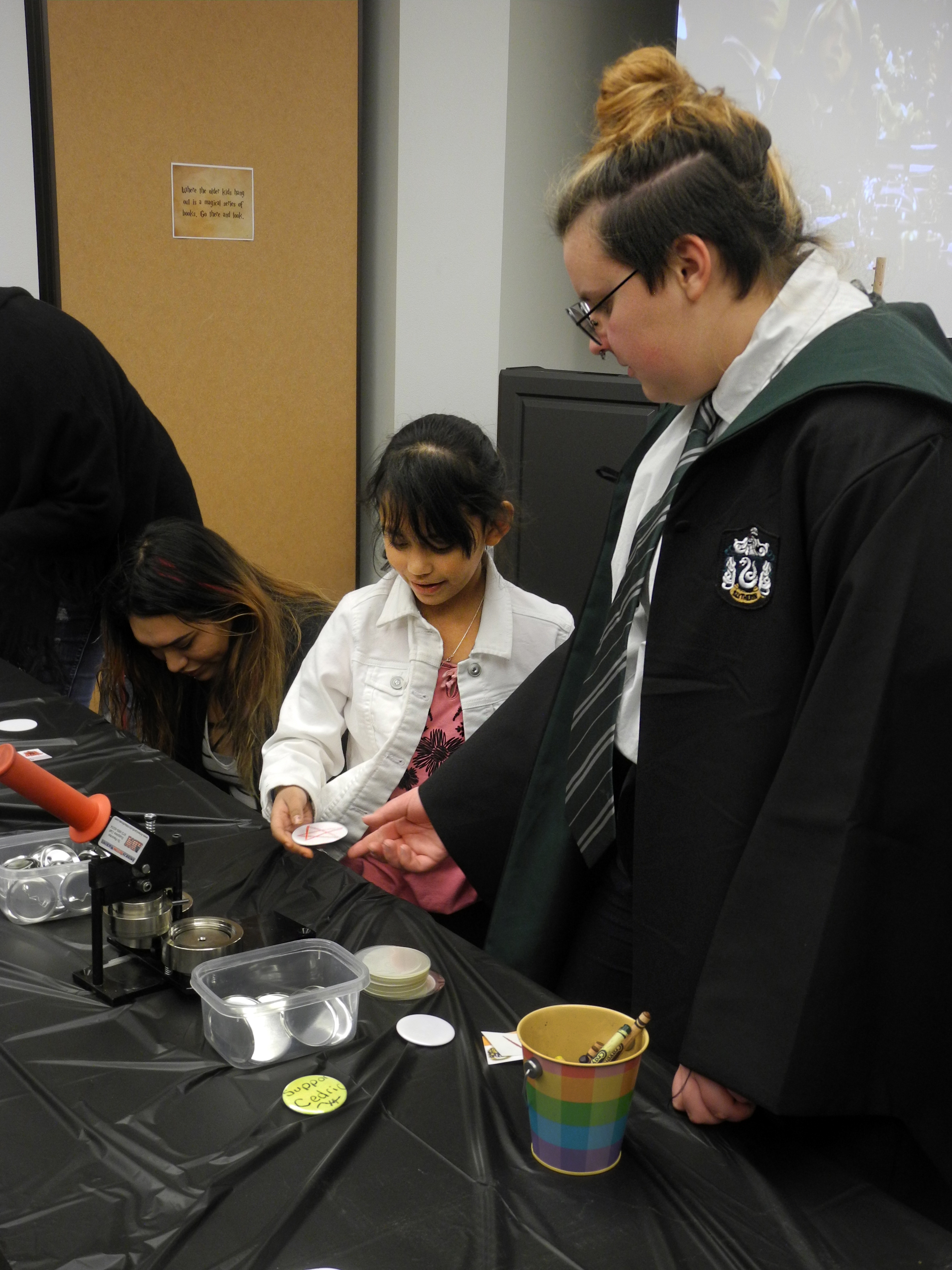 A girl waits for the design she created to be turned into a button at a Harry Potter Book Night event. 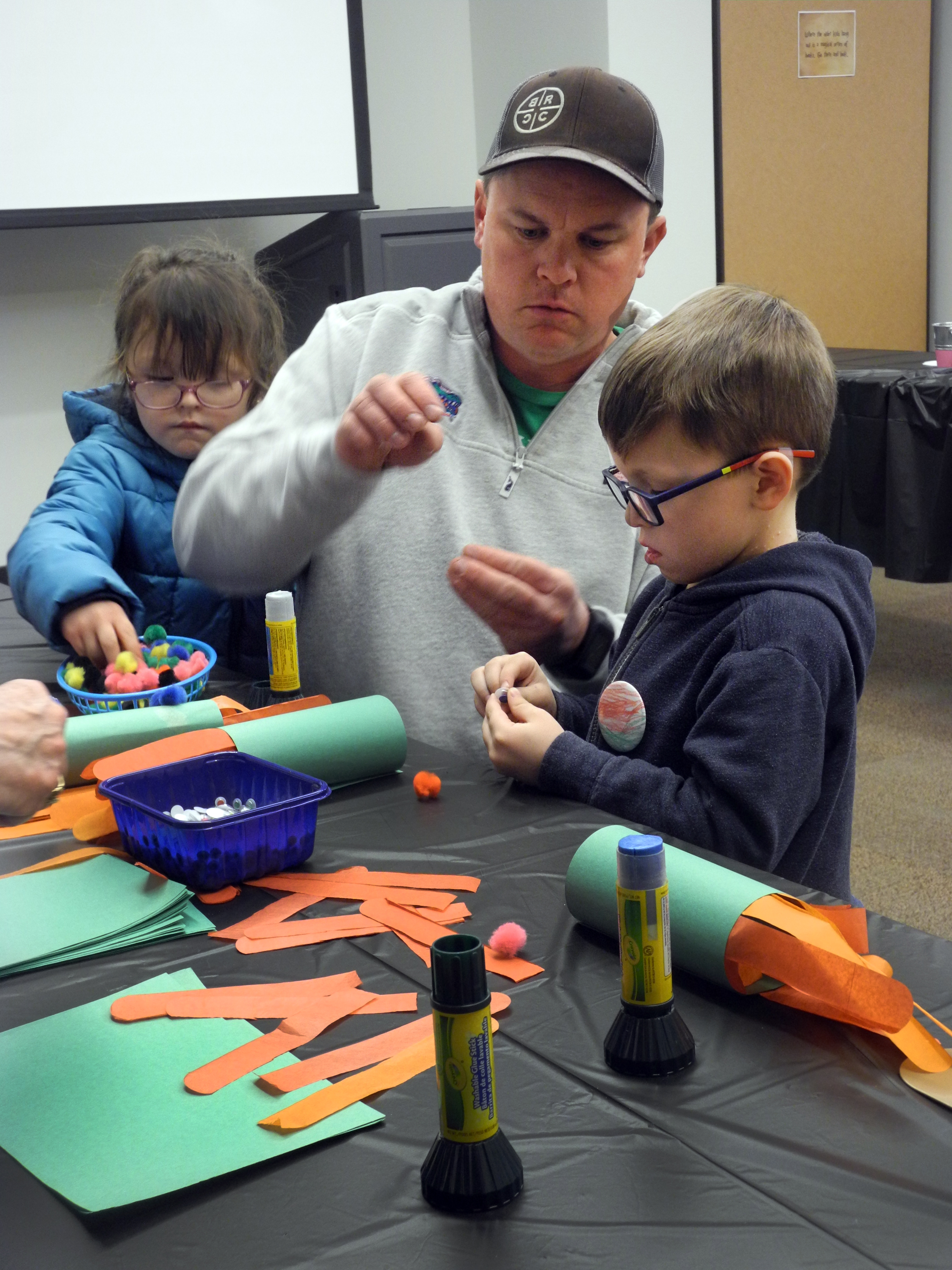 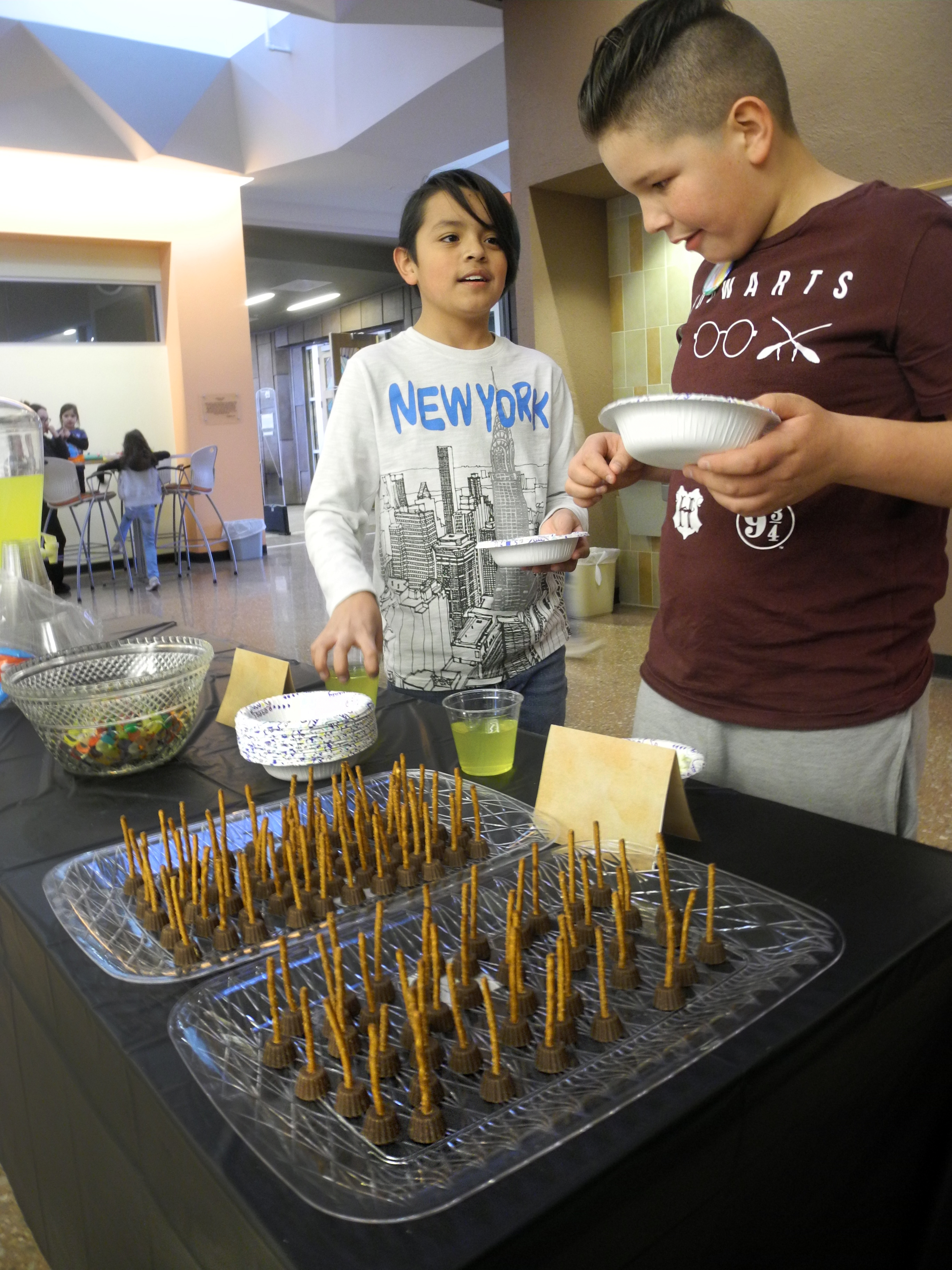 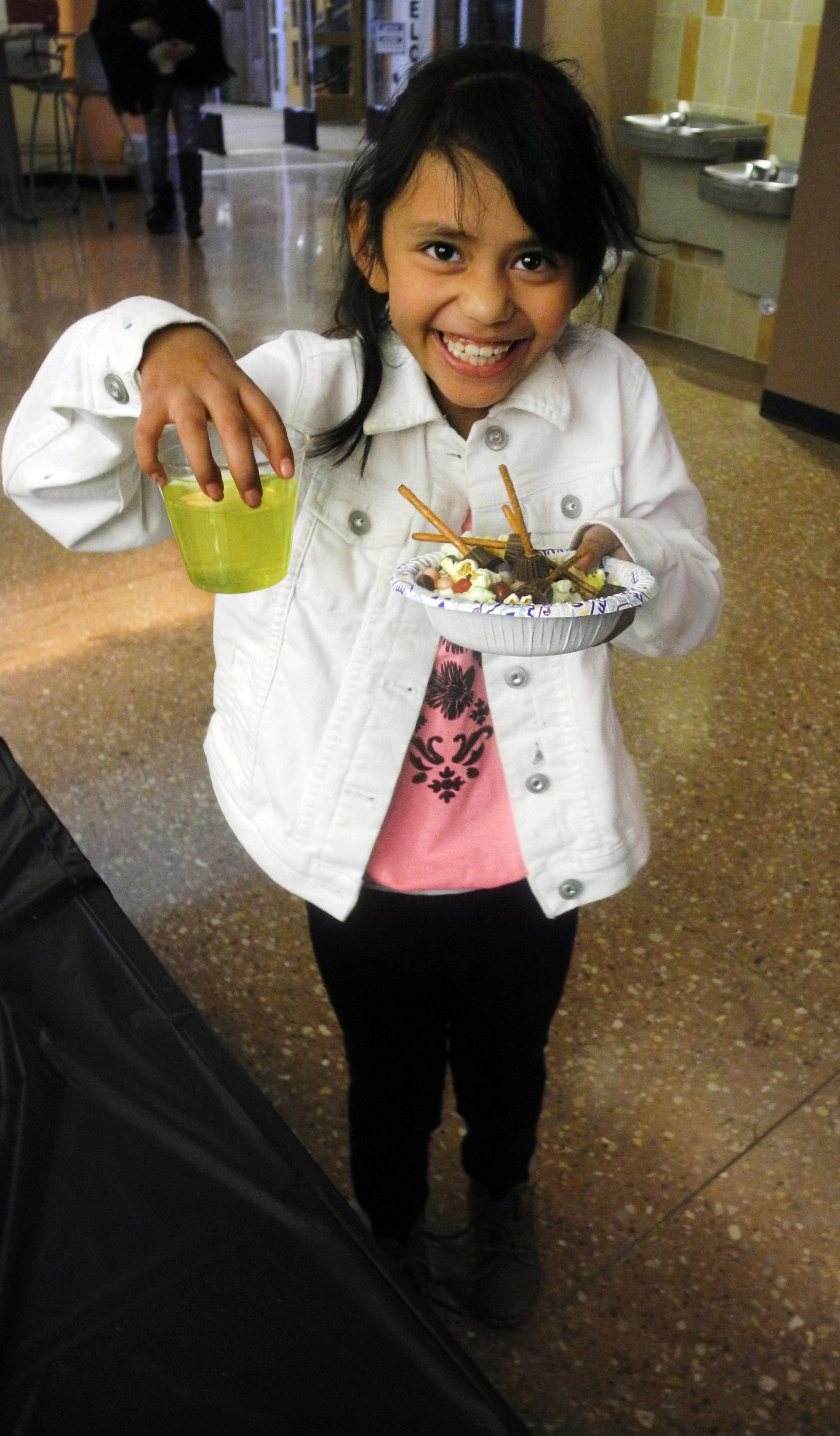 A girl shows off her “Polyjuice Potion” and “Niffler Munch” at a Harry Potter Book Night event.

Over the past six years, Bloomsbury's Harry Potter Book Night has brought a little piece of the magic to life for children across the globe. By letting them step for a moment into the world of the characters they love, their imaginations are fueled, their sense of belonging is strengthened, and - most importantly - they're inspired to keep reading.

The fact that the vast majority of local events are free of charge makes them accessible to everyone. Children and adults alike form new friendships with the people they encounter. Libraries large and small benefit from the opportunity to introduce their facilities and programs to residents who've never utilized them before.

The Wizarding World fandom is a community, and each year since 2014, new members of all ages have been welcomed in by events like Harry Potter Book Night. And whether that's experienced at an enormous community center packed with hundreds of people or among a few dozen at a tiny hometown library, that's a type of magic that's very real indeed.

With free or affordable local events, Harry Potter Book Night not only allows fans to celebrate something they love but also encourages local communities to come together for a shared experience.

As the accounts from these MuggleNet staff members show, Book Night events can introduce children to the wonders of the wizarding world while helping foster a love for both reading and their community. For teens and adults alike, it’s an opportunity to make connections with like-minded people, as well as a chance to explore and support local resources and services.

Harry Potter Book Night is not only magical in name but also magical in nature, bringing communities together.