You want to watch a movie, but perhaps you don’t want to have a Harry Potter movie marathon for the umpteenth time? If you’re looking for something to amuse yourself while social distancing/isolating/quarantining, Disney’s Bedknobs and Broomsticks is a magical movie that can entertain young and old. The premise is that three children move to the British countryside and live with a witch, where they learn about magic, go on adventures, and fight Nazis. It’s perfect for people who love Disney movie musicals and Harry Potter.

The film is an old one, but a good one that apparently is not well known in popular culture, as one moment from my high school AP European History class can attest. My teacher asked, “During the Blitz, London children were sent to the countryside to be safer, like in what movie?” Apparently, the answer is the Chronicles of Narnia, not Bedknobs and Broomsticks (like I enthusiastically shouted), which no one else in my class had ever heard of or seen before. But Bedknobs and Broomsticks is really good, and here are ten reasons why you should give it a watch:

1. It’s a movie starring British children in the UK countryside hanging out with a witch and some magical creatures. Sounds pretty familiar… right? 2. However, these children go on a magical adventure that is a bit more exciting than wandering around the woods for seven months, including an ocean adventure. And the talking animals don’t try to eat them at any time!

3. The witch, named Eglantine Price, fights Nazis using her magic and while on a broom, acting very much like a combined Professor McGonagall and Oliver Wood during the Battle of Hogwarts. 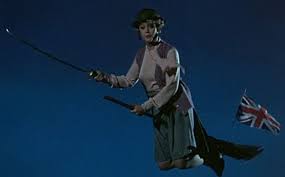 4. Eglantine fights the Nazis by animating the armor and weaponry from the local museum to attack without a person occupying the armor, like the stone statues from McGonagall’s Piertotum Locomotor spell at the Battle of Hogwarts.

5. There are plenty of song and dance numbers, such as with the spell mentioned to animate the armor.

6. In case you want to see a Lady Knight playing a witch besides Dame Maggie Smith, the witch in this film is played by Dame Angela Lansbury. She is also known for playing Mrs. Potts in the Disney animated Beauty and the Beast and starring in Murder, She Wrote.

7. The cat is just as sassy as Crookshanks, if not more so. 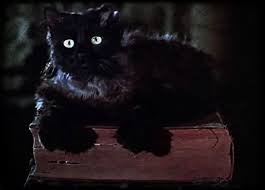 8. There is broomstick flying outside of Quidditch or saving Draco Malfoy.

9. The movie also has the man who played Mr. Banks in Mary Poppins. And this time he’s not a mean, disinterested father; he’s the love interest!

10. In fact, it’s a lot like Mary Poppins got together with Chronicles of Narnia and had a movie child, because there are three children who are sent to the British countryside to escape the Blitz and then go on partly-animated magical adventures, complete with musical numbers.

There are ten reasons why you should watch Bedknobs and Broomsticks. You can find the film on Disney+ or rent/purchase on YouTube, Amazon Prime, Google Play, and iTunes.  Comment with what other magical movies you like to watch, because right now we’re all looking for new titles to explore!