Daniel Radcliffe is having a busy quarantine. As previously reported, he had several new projects released this spring. He has even managed to find the time to kick off the Harry Potter at Home read-along of Harry Potter and the Philosopher’s Stone/Harry Potter and the Sorcerer’s Stone. Australian morning show Today caught up with Daniel to talk about his experience filming Escape from Pretoria, now that the movie has hit video-on-demand services. 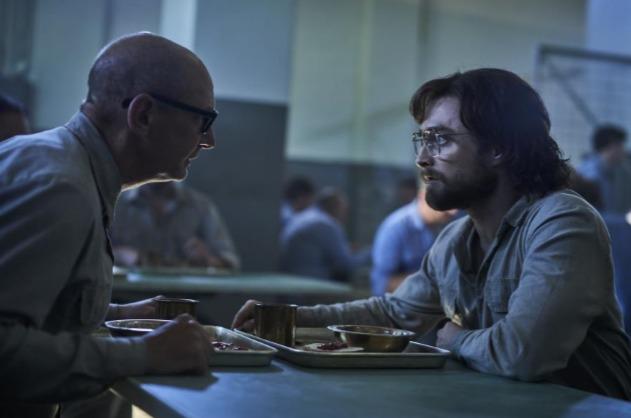 Escape from Pretoria is the story of a real-life former anti-apartheid activist in South Africa and political prisoner, Tim Jenkin, played by Daniel. He joined his fellow Harry Potter alumnus, Ian Hart (Professor Quirrell) playing fellow inmate Denis Goldberg, for eight weeks of filming in Adelaide, Australia. In his remote interview with Today, he said he feels very proud of this movie:

It always feels like a win when you get one of these films made that has been a labor of love not just for me but [also] for many, many people for a long time. It’s an incredible story, a true story of these guys, Tim Jenkin and Stephen Lee, and the true story of them breaking out of this prison in the most incredible way. And it’s always nice to be able to tell a story that feels like one that more people should know, because it’s such a crazy brilliant escape story.

This was Daniel’s second time working in Adelaide, following December Boys, which was released way back in 2007. Back then, he was still in the middle of filming the Harry Potter films. His fame has only grown since then, which he sensed when working on Escape from Pretoria, as he said, getting a bit flustered:

The shoot was very all-consuming, and we were there, I think, very much during the Fringe [Festival], so it was quite busy. […] I did feel very recognizable in Adelaide.

While the majority of the movie is set in a prison, Daniel filmed some speedy sprinting scenes on location as well. Despite the difficult subject matter of the movie, he took the time to wave at curious fans between takes with a big smile on his face.

When asked about the South African accent that he had to master for this movie, he said that “there [were] quite a few South Africans who worked on Potter, so it was an accent that I was around a little bit when I was younger, so I was hoping that some of that came out” and quoted a line from the movie that helped him get into it.

Daniel also got to dismiss the idea once again that he and his fellow castmates were unhappy while filming Harry Potter. Furthermore, he maintains they are still very close and keep in touch, particularly now that Rupert Grint has recently become a father. Daniel got to express his feelings about this news as well:

It’s still wild to me that we’re now at the stage where we’re having kids, and I’m sure that that is a fact that made the rest of the world feel very old. I’m genuinely just so happy for him and Georgia [Groome, Rupert’s girlfriend], and yeah, he’s going to be an awesome dad.

While Escape from Pretoria was released in theaters in March, with lockdown restrictions still keeping cinemas closed, it is now available on VOD services. We are excited to watch this movie to learn about a piece of history that, as Daniel said, gets unduly forgotten.