Toy company YuMe will launch preorders of its newest magical collectible exclusively on Walmart’s website as part of the retail company’s Collector Con on July 17.

Harry Potter Magical Capsules are a mystery bag-style collectible, with each Hogwarts crest-shaped capsule containing seven miniature items, including a Harry Potter character. Collectors will need to use color-coded, heat, and water mechanisms to unlock the character hiding in a secret chamber inside the capsule. 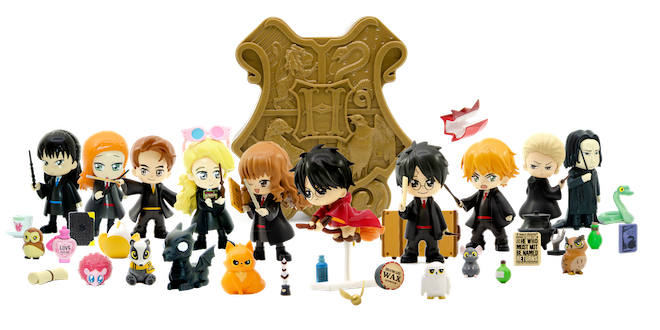 There are ten magical capsules to collect in this first series: Harry, Ron, Hermione, Quidditch Harry, Ginny, Draco, Luna, Cho, Cedric, and Snape (who is the only professor in the series). Among the other items included in the Magical Capsules are the character’s wand, a magical creature, and other character-specific items such as textbooks, teacups, potions bottles, and more. Each capsule is set to retail for $9.99.

If you stumble across Harry in your capsule, you will find his wand, Hedwig, a Hogwarts acceptance letter, and a trunk among the additional items. Quidditch Harry features Harry in his Gryffindor Quidditch robes, some broom care essentials, a broomstick, and a Golden Snitch. 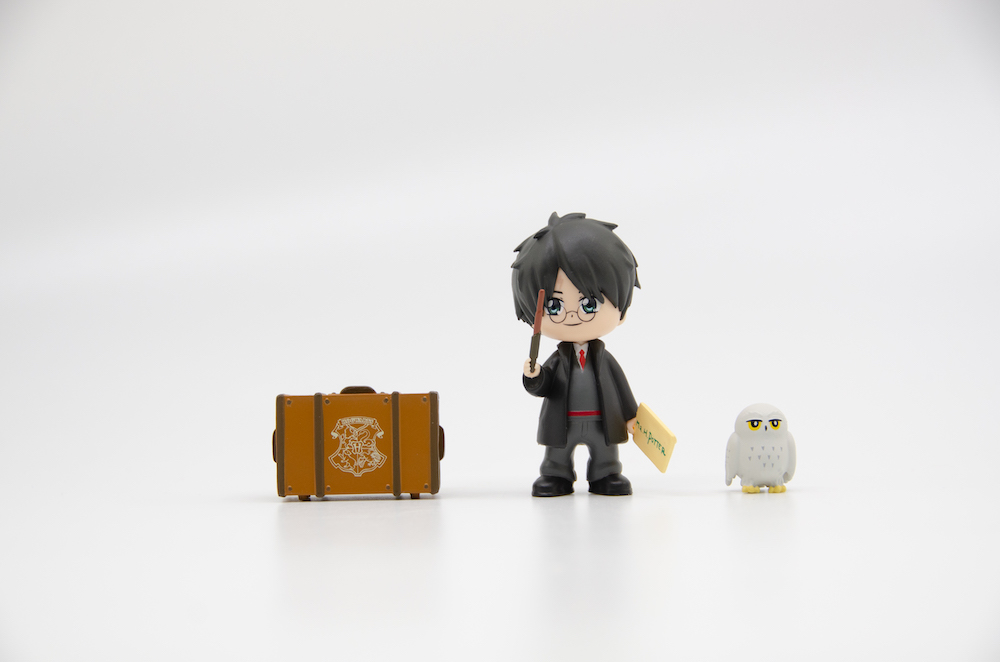 Ready for his first year at Hogwarts, Harry comes with a trunk and his Hogwarts letter. 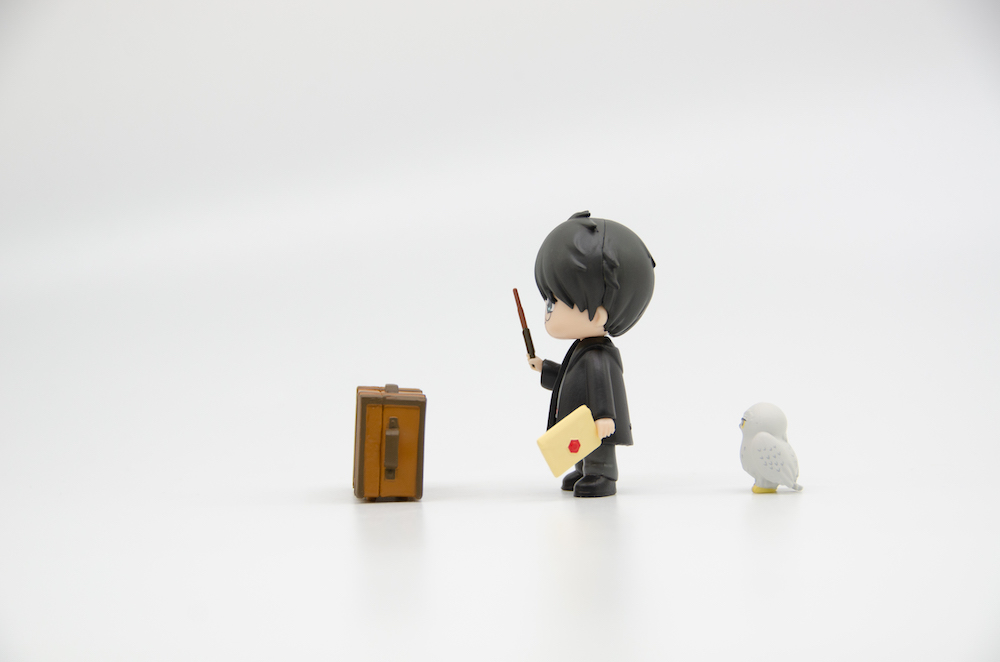 The wax seal of the Hogwarts letter is an example of the detail included in these collectibles. 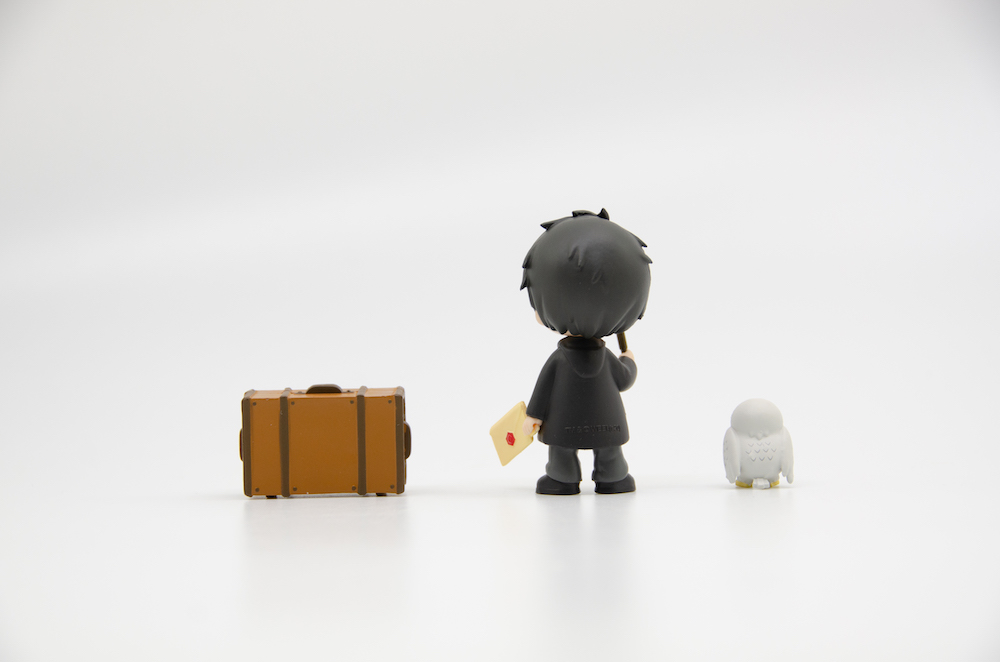 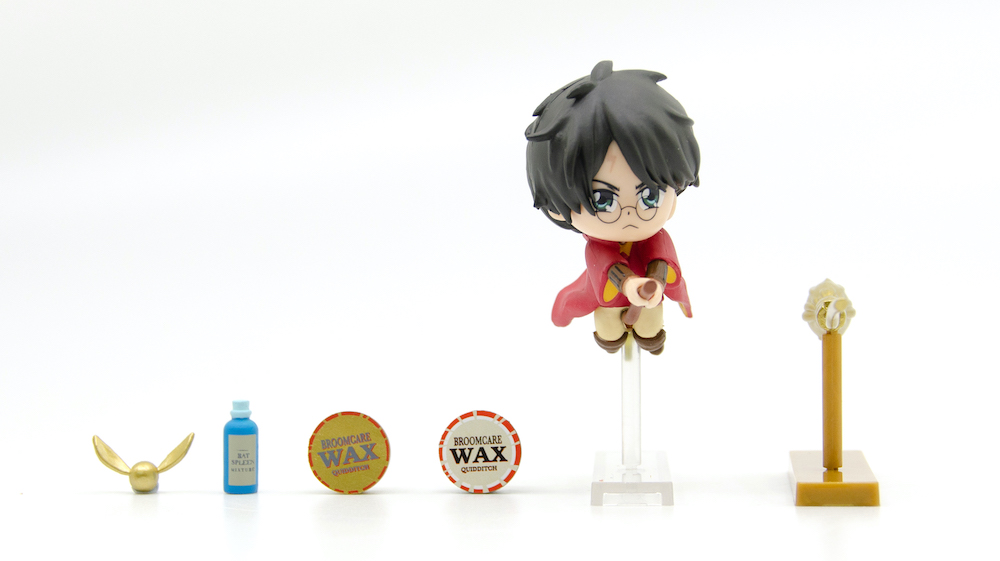 Bat spleen is the main ingredient in one of the mystery broom care items.

Just in case there is a Whomping Willow about, Quidditch Harry comes with a second broomstick. 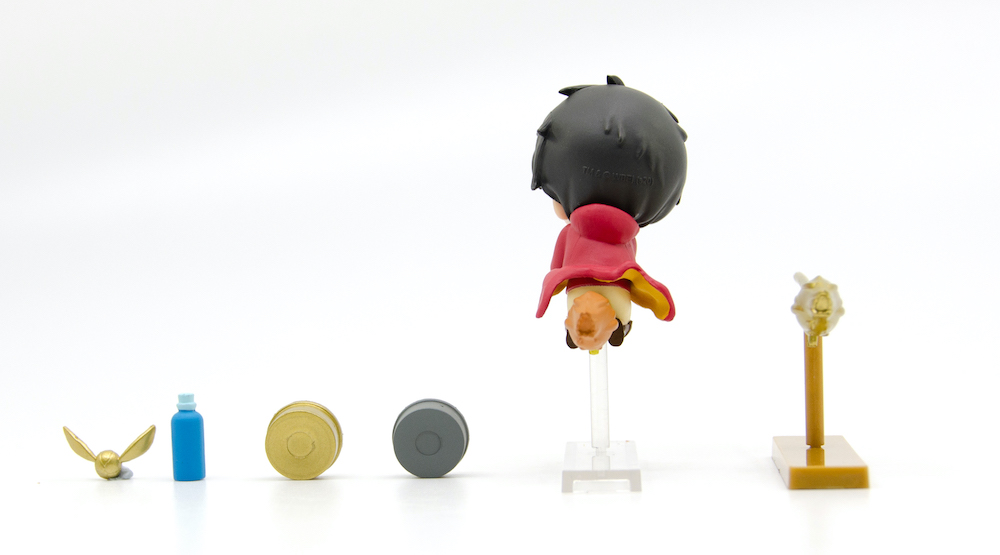 Quidditch Harry is so far the only variation on a standard character in this series.

Hermione comes with her wand, a History of Magic textbook, quill and inkpot, and a rather grumpy-looking Crookshanks! 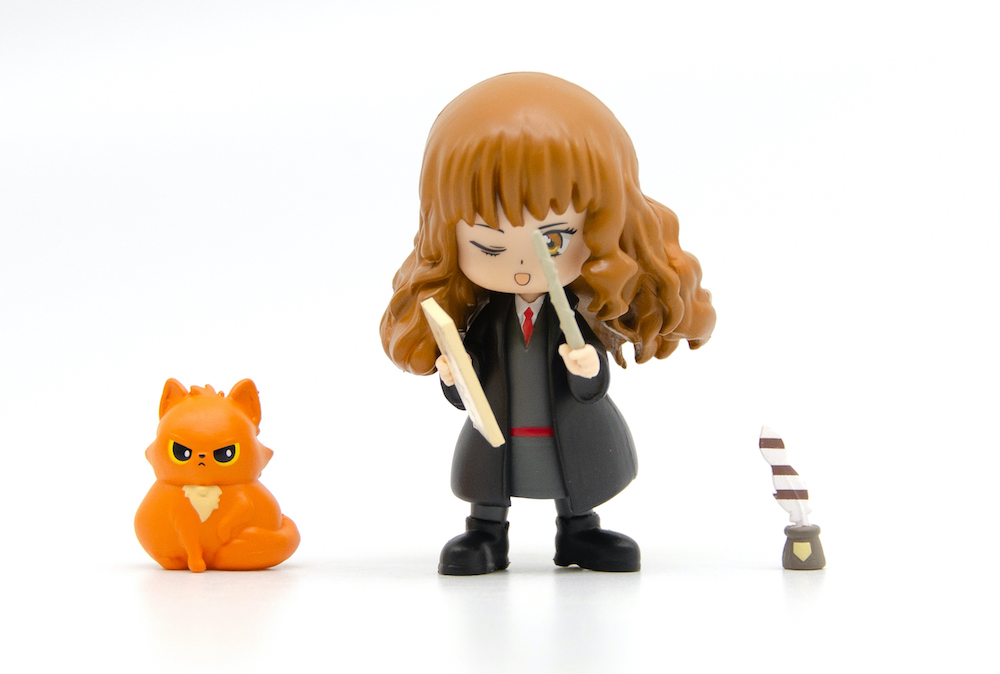 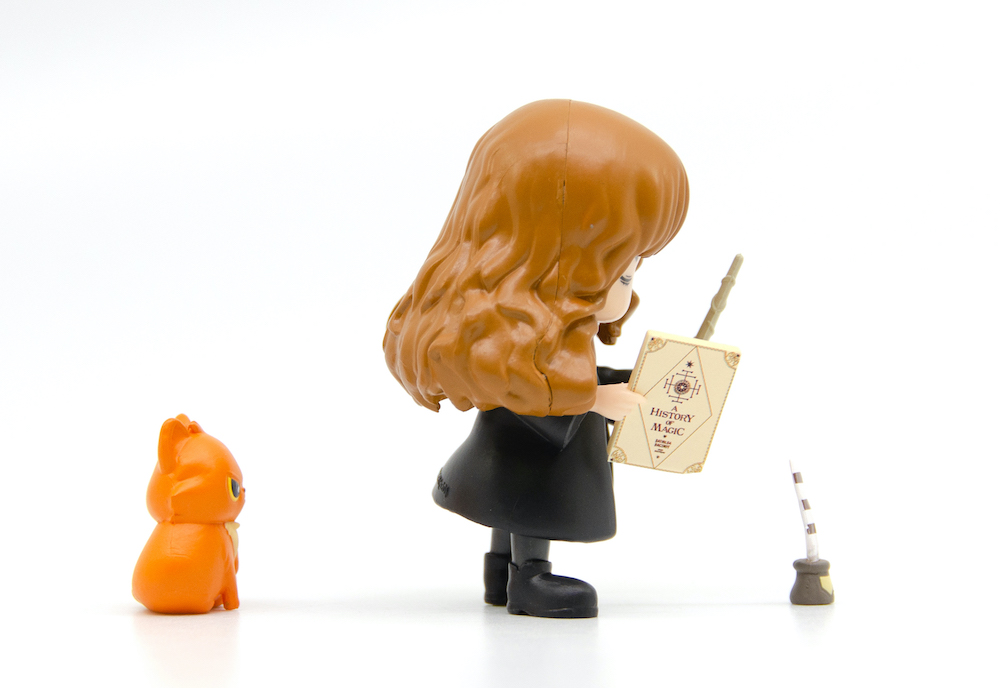 The detail on the cover of the textbook reveals that it is a copy of “A History of Magic”. 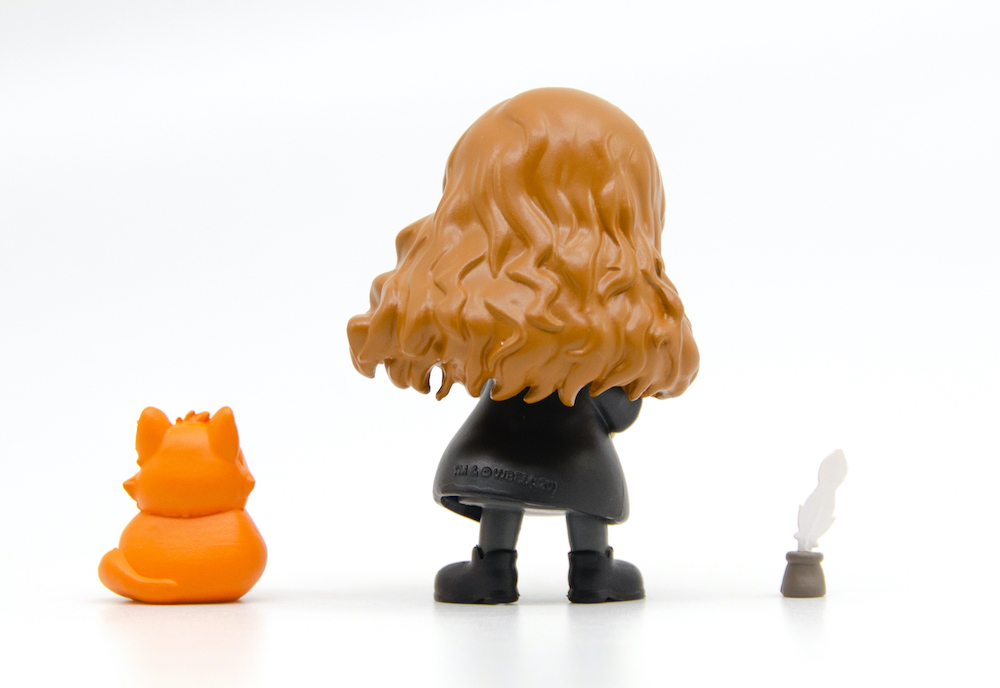 A quill and inkpot are also included with Hermione’s character figure.

In addition to his wand, Ron comes with a Howler, Scabbers, and a potions bottle. 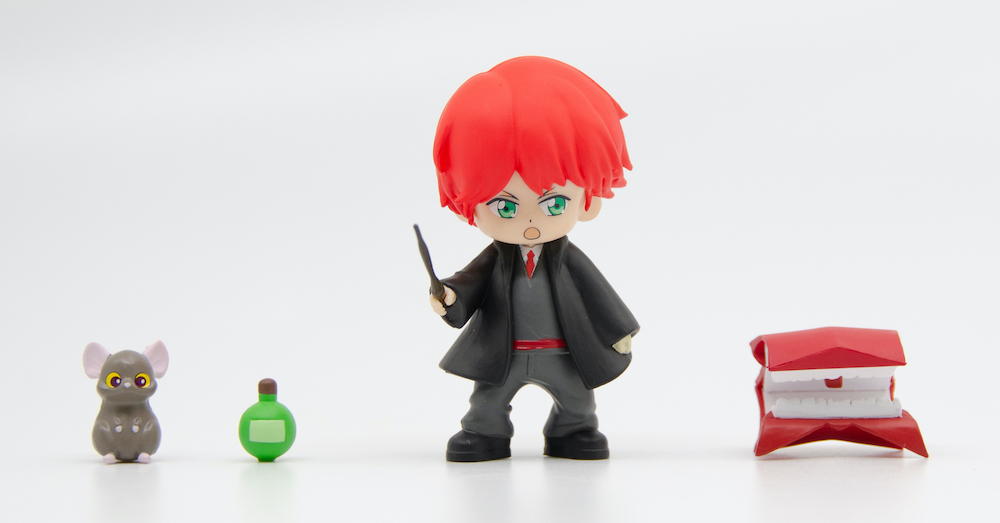 A Howler is another magical item that is included with Ron’s character figure. 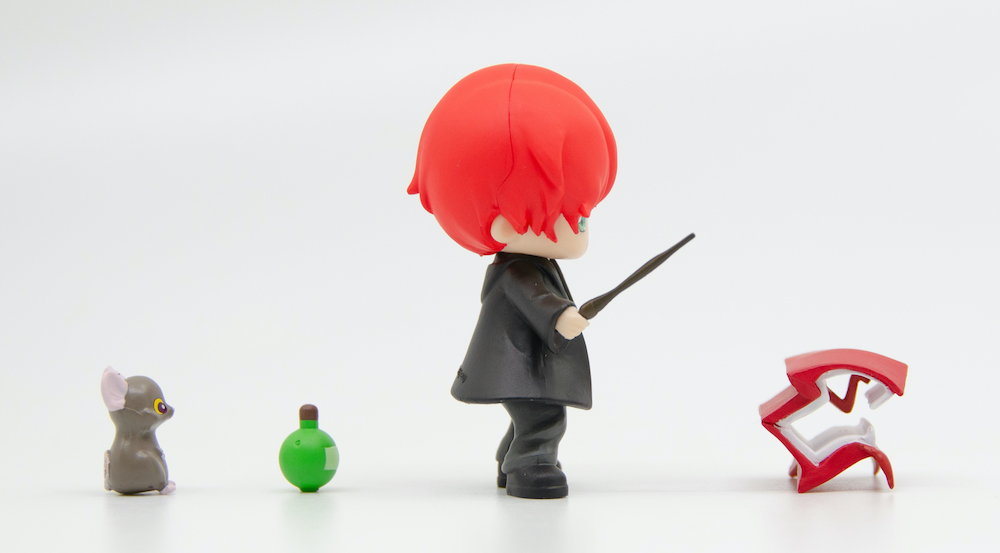 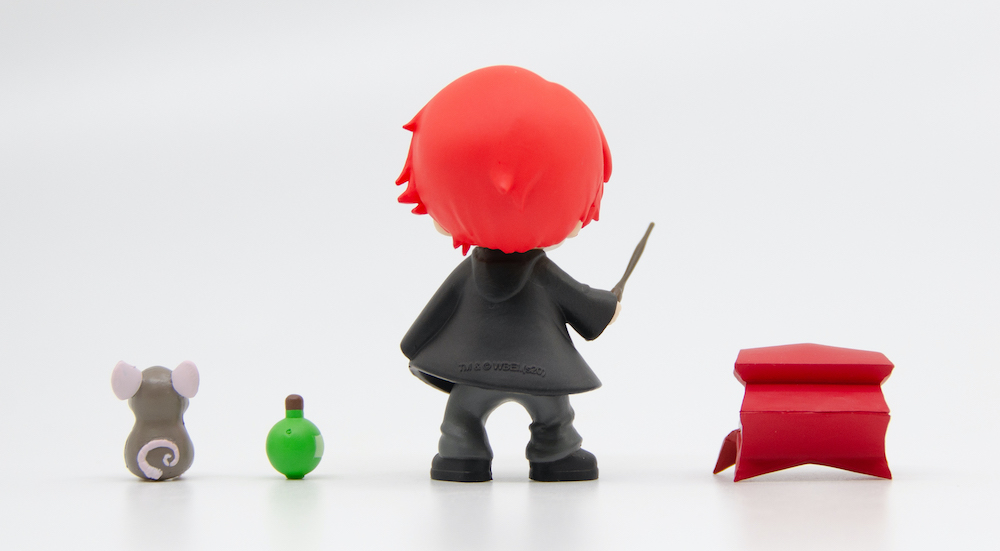 What is in the mystery potions bottle that comes with Ron’s character figure?

Draco Malfoy comes with an owl, a cauldron, and the Hand of Glory. 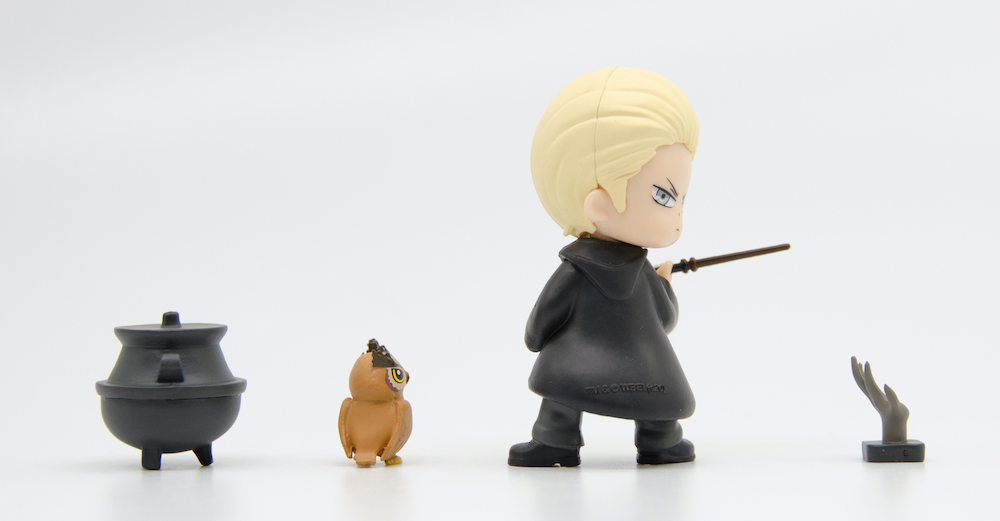 Draco’s character figure is posed so that he is looking over his shoulder. 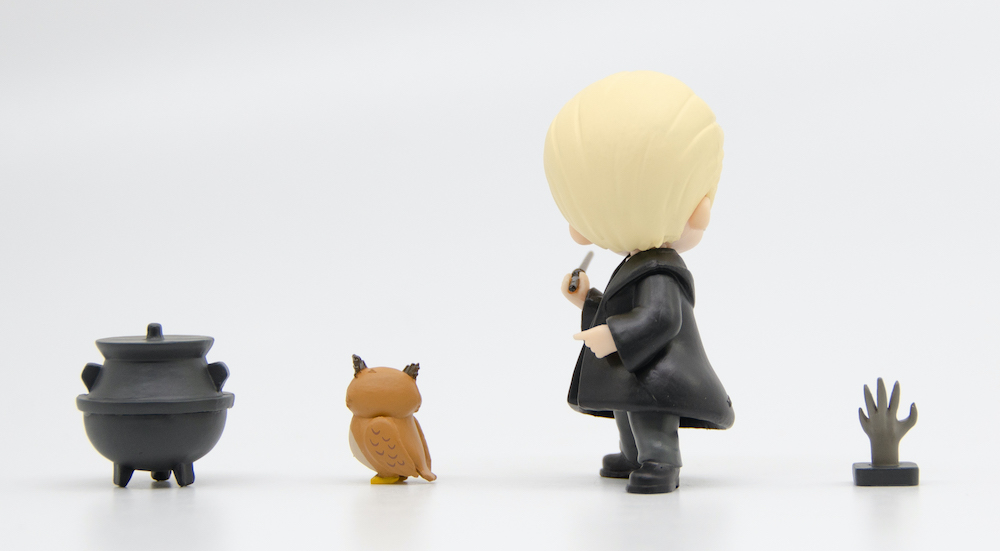 Draco comes with a cauldron and the Hand of Glory. 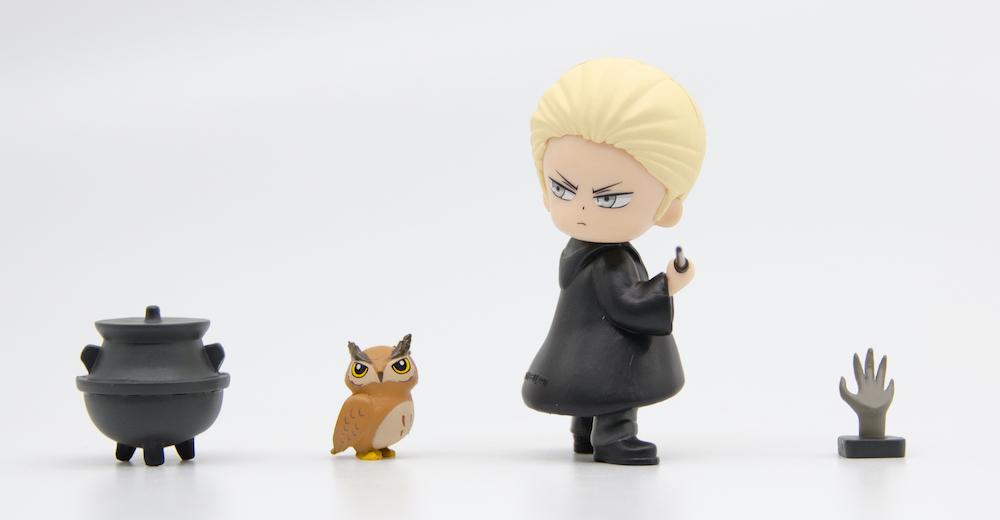 Draco also comes with an owl, famous for bringing deliveries of candy to the Slytherin table.

Luna can be found with a copy of The Quibbler, Spectrespecs, and a Thestral. 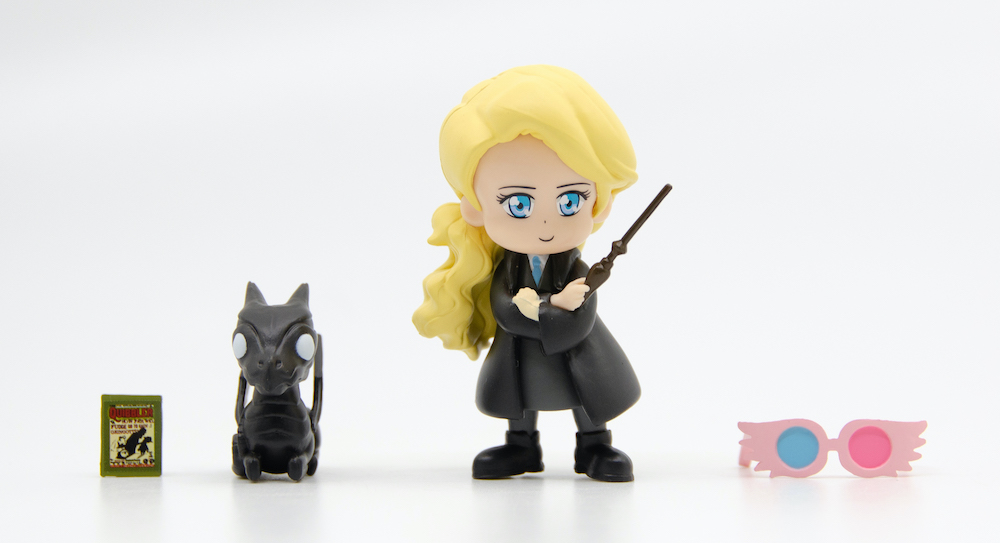 Luna comes with a copy of “The Quibbler” and her iconic Spectrespecs. 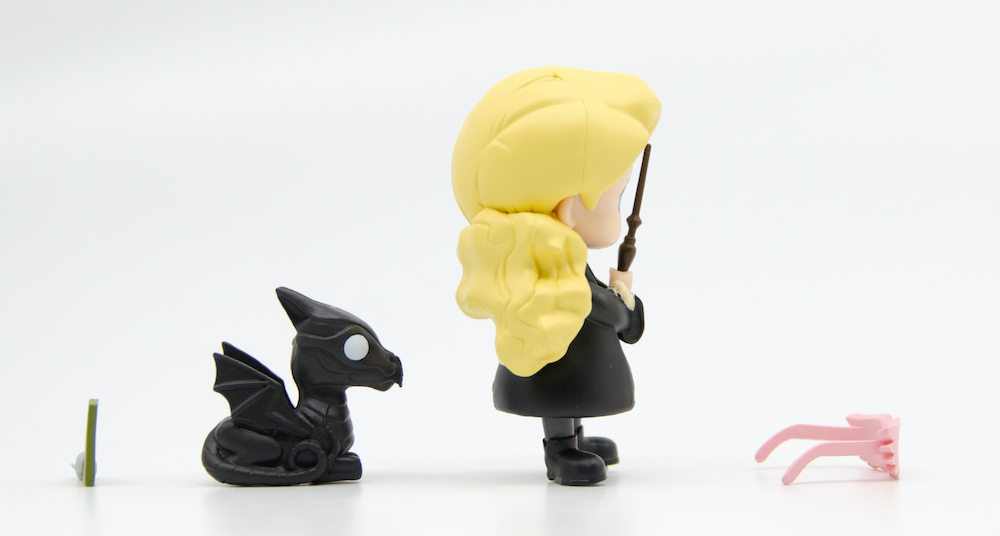 A Thestral is included as Luna’s magical beast.

Luna is one of two Ravenclaws featured in this series; the other is Cho Chang.

Cedric comes with his Triwizard Golden Egg, a badger, and a copy of the Daily Prophet. 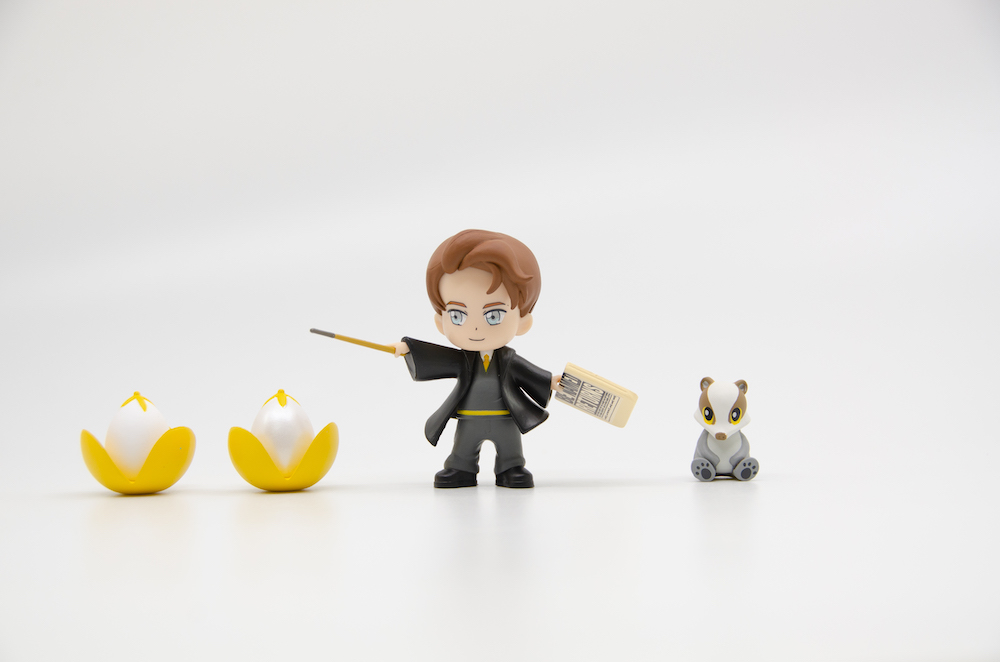 Celebrating his participation in the Triwizard Tournament, the Cedric figure comes with a golden egg. 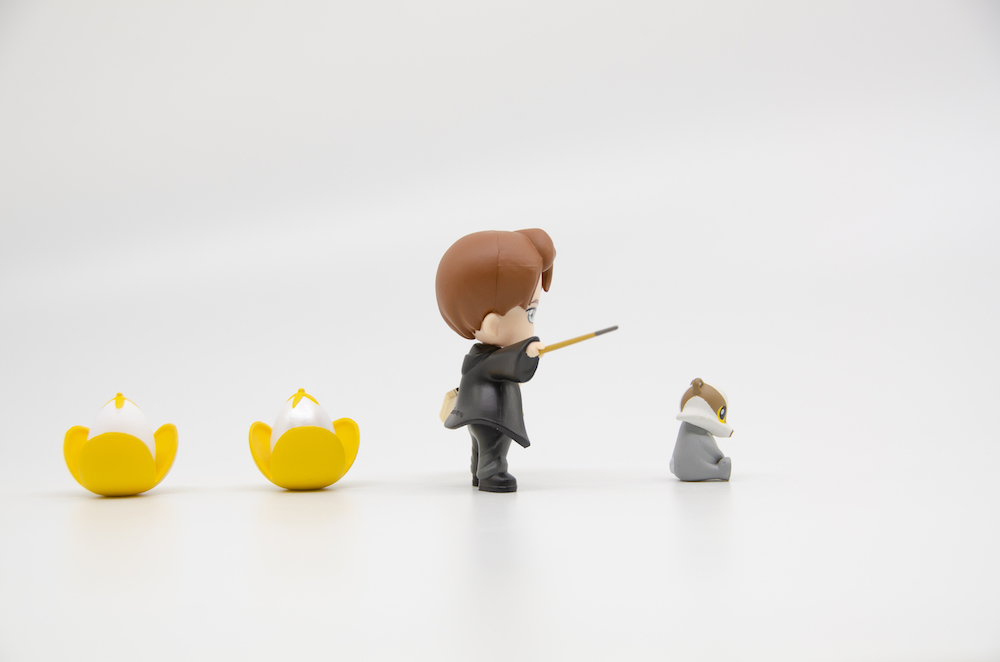 A true Hufflepuff, Cedric’s magical creature is a badger. 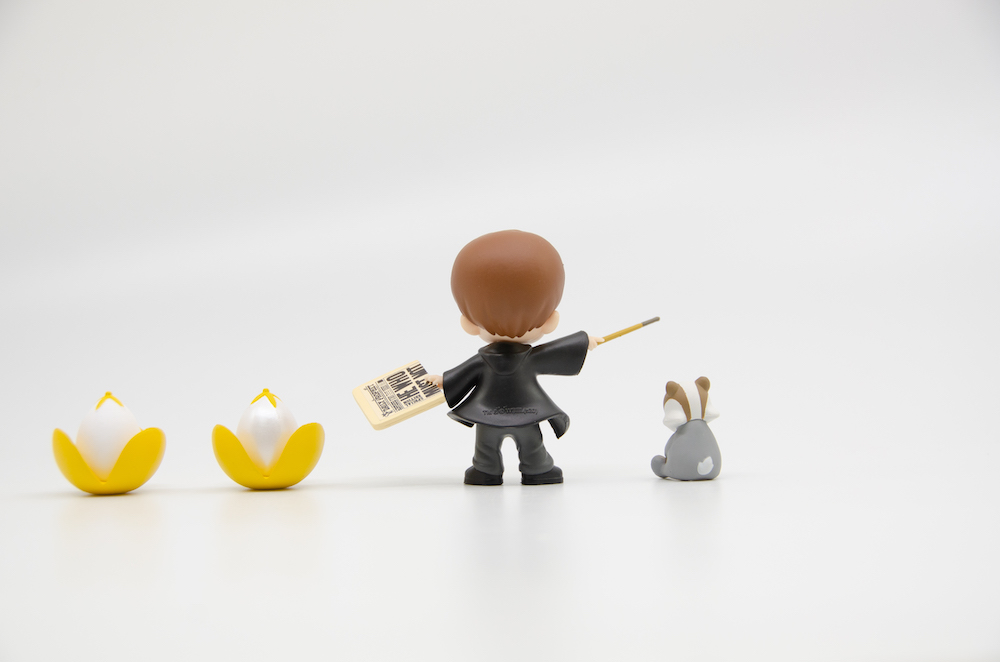 Cedic comes with a copy of the “Daily Prophet”.

Walmart is holding Collector Con on its website on July 17 to help collectors get their hands on items that are usually only available at conventions. With a large number of conventions canceled this year due to the outbreak of COVID-19, this is a perfect way to get your hands on some exclusive toys and collectibles.

Are you planning to collect Harry Potter Magical Capsules? Let us know in the comments.

YuMe, an award-winning global toy brand, introduces an enchanting new collectible based on the Wizarding World™ with [its] Harry Potter™ Magical Capsules launching pre-orders [sic] exclusively at Walmart.com, as part of the retailer’s Collector Con on July 17, 2020.

Shaped to resemble the iconic Hogwarts’ [sic] [s]chool crest, the Harry Potter Magical Capsules introduce a new way for fans to show their passion for the Wizarding World. Inside each capsule are seven surprises, including a character from J.K. Rowling’s Harry Potter series, hidden within a secret chamber. Through an unboxing journey of discovery, fans will use color-coded, heat, and water-reveal mechanisms to unlock the surprise character inside.

“The incredible and enchanting world of adventure found in the Harry Potter and Fantastic Beasts franchises adds more than a little magic to fans’ lives," said Michael Kwan, CEO of Maxx Marketing. “We are tremendously excited to extend the sense of awe and wonder that the films are famous for with our Harry Potter Magical Capsules and give fans the opportunity to collect, unbox and showcase the magic found inside of them.”

There are ten Harry Potter Magical Capsules to collect in series one with iconic characters such as Harry, Hermione, Ron, Luna, Snape and many more. Each capsule also includes a wand, a fantastic beast pet, and three other surprise accessories. Each capsule will retail for $9.99

YuMe’s Harry Potter Magical Capsules will launch as part of Walmart’s Collector Con, the retailer[']s initiative to allow fans to continue to build their collections with products normally only available at fan conventions across the country.

The Harry Potter Magical Capsules are being launched in stores this week – and they aren’t exclusive to Walmart! YuMe has announced that the Harry Potter Magical Capsules collection of figures is now “at stores across North America including Amazon, Hot Topic, Walgreens, Indigo Books and Music and Walmart.com.” According to the press release below, “each capsule will retail starting at $9.99 or $19.99 for dual packs.”

There are ten Harry Potter Magical Capsules to collect, including beloved Harry Potter characters such as Harry, Hermione, Ron, Luna, Snape and many more. Each character is revealed through an unboxing journey, where witches and wizards alike will magically unlock the seven surprises in each capsule.

“The Wizarding World has always given fans enchanting adventures and magical experiences with strong characters," said Michael Kwan, CEO of Maxx Marketing. “We are overjoyed to let fans bring home a little bit of that magic with our Harry Potter Magical Capsules. Our new collectible gives fans the opportunity to collect, unbox and experience the magic of the Wizarding World.”

These new Wizarding World collectibles are shaped to resemble the Hogwarts crest, and the hidden character inside is unlocked through color-coded, heat, and water-reveal mechanisms. Each of YuMe’s Harry Potter Magical Capsules has seven surprises, including the character, their wand, a pet, and three other surprise accessories.

Harry Potter Magical Capsules from YuMe will be appearing in store [sic] this week, and each capsule will retail starting at $9.99 or $19.99 for dual packs.