It’s Weasley Month here at MuggleNet. In honor of the celebration, we’re excited to show off our Weasley family tree that we’ve been diligently building. Many fans have tried linking as many wizards as possible to each other, and we are going to try as well. We were able to deduce a lot from the way the seven novels are written, but there are still some relations that took educated guesses to figure out. Hopefully, this article will help explain our thought process. 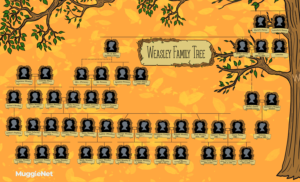 Let’s start with Arthur’s and Molly’s siblings. We know that Arthur had two brothers. It is likely that one of them was Bilius, Ron’s uncle who died pre-1993, apparently from seeing a Grim. The other was probably the man at Bill and Fleur’s wedding who was drunk and mistook Harry for his own son. Although this unnamed son is only mentioned once, he is most likely real since Weasley cousins are mentioned several other times. Molly has two brothers whom we know of: Fabian and Gideon. They both died in the First Wizarding War and had no known spouses or children. No other Prewett siblings are ever mentioned, further suggesting that Bilius is in fact Arthur’s brother.

It is never stated specifically that Arthur’s parents are Septimus Weasley and Cedrella Black. However, Sirius’s comment in Harry Potter and the Order of the Phoenix almost proves that this is the case. Arthur was “something like [his] second cousin once removed” (OotP 113). We know from the Black family tree that Cedrella is a first cousin once removed of both Sirius’s parents, proving Arthur’s statement. This is further supported by the fact that the entire House of Black is seen on the tree, making it very unlikely that another option is possible. Meanwhile, Molly’s parents are unknown. We do know, again from Sirius, that Molly is his cousin by marriage. This means that Ignatius, given the marriage between he and Lucretia, could not be Molly’s father but her uncle.

So at this point, we know everything we can about Arthur’s side of the family. This includes all his children and grandchildren, which we know from Harry Potter and the Deathly Hallows and Pottermore. The complicated part is Molly’s side of the family. We only have three more individuals who are mentioned within the novels – Lancelot, Muriel, and Molly’s accountant second cousin.

Lancelot, a Healer at St. Mungo’s, is an easy person to place. We know he is Muriel’s cousin (DH 156). However, we have no information on either of their parents or their last names. So the exact relation is unfortunately a mystery.

Muriel is harder to place in relation to the Prewetts. She was first mentioned in Chapter 29 of Harry Potter and the Half-Blood Prince by Molly as “our great auntie Muriel,” and according to Pottermore, she is “technically Mrs. Weasley’s great aunt.” The addition of the word “technically” leads us to believe that Muriel wed Molly’s great-uncle. We don’t know which of Molly’s parents this great-uncle is related to. It is possible that he is a Prewett, but we have no proof.

Molly’s Squib second cousin (mentioned by Ron on page 99 of Harry Potter and the Sorcerer’s Stone) is unnamed. However, given the current family members, the only way he could be Molly’s second cousin is if he’s Muriel’s grandson (they would be third cousins if he were Lancelot’s grandson). JKR said that she planned a Weasley cousin for years. Her name is Mafalda, and she was meant to be the magical daughter of this Squib. Her first appearance was set for Harry Potter and the Goblet of Fire, but she was ultimately cut out. Our best guess is that Mafalda was actually a Prewett along with her assumed great-grandparents. We believe that Rowling wouldn’t have wanted to separate her further from the Weasleys by giving her a different last name since she was meant to be a part of the family. It makes sense that the Prewett line would have been more pronounced had Mafalda been kept in the novels.

Both the Weasley and the Prewett families were part of the Sacred Twenty-Eight, meaning that all their members were of pure-blood descent in the 1930s. However, the Weasleys didn’t matter to other pure-blood families because they were marked as blood traitors before Septimus and Cedrella married. This suggests that when Lucretia and Ignatius wed, the Prewetts were still a respected family since he was not burned off the Black family tapestry. The marriage of Septimus and Cedrella relates the Weasleys to the Yaxleys, Longbottoms, Crouches, and Macmillans. Spouses of Ginevra and William also relate the family to the Potters and Delacours, respectively. 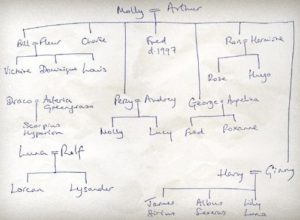 We hope that these explanations make sense and that you agree with our placement of the Weasley relatives. Comment below with your thoughts. Please note: We did not forget Great-Aunt Tessie. She is only a movie-canon character. For more information on these and many other characters in the wizarding world, check out MuggleNet’s The Unofficial Harry Potter Character Compendium in stores and online.