Actor, director, environmentalist, and the Harry Potter movies‘ Ginny Weasley, Bonnie Wright, has recently streamed a brand-new Instagram Live chat, this time with Jamie Margolin. The guest is an 18-year-old author and activist, who gave advice on managing anxiety about climate change, becoming a youth activist, and going to film school, just like Bonnie did.

Bonnie got involved in environmentalism after learning about plastic in the oceans. Since she joined Greenpeace, she has urged us and companies as big as Coca-Cola to eliminate plastic and use alternative packaging materials. Earlier this year, she also visited Guatemala with the Rainforest Alliance. On her Instagram account, she previously streamed live discussions with other activists such as Denu Tsegaye, Leah Thomas, and Kevin Patel. Her series focuses on environmental issues and particularly youth participation. 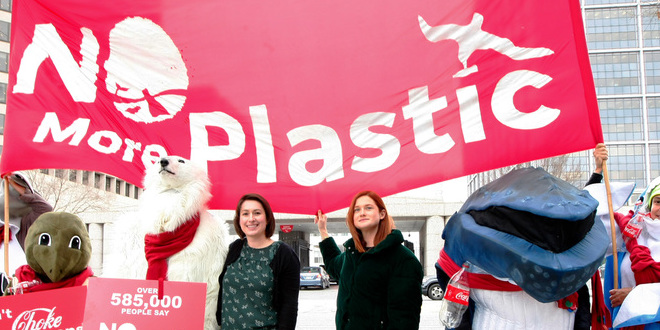 However, putting out fires gets a whole new meaning when there are wildfires as large as the recent one on the West Coast of the United States, and that’s not counting added political and social issues. “Especially, I think, when there’s anger involved and confusion,” Bonnie highlighted, “when there’s injustice, there’s this frustration and anger, and there’s no way to put it before you’re hit with the next story.” This can take its toll on one’s mental health, but as her interviewee pointed out, “you still have to get up and do your homework and go through every day.”

When she’s not doing homework, Margolin is a true role model. At just 18, she is a climate justice organizer, the author of Youth to Power, which has a foreword by Greta Thunberg, and a film and television student at New York University. She is also a plaintiff suing the United States government for worsening the ongoing climate crisis, which is reaching a critical point termed Zero Hour, which is also the name of her organization fighting for sustainability.

Climate change is a vastly intersectional issue that affects everything, but it will affect today’s youth more than any prior generation unless we do something about it now. But how can someone become an activist as young as 14 years old like Margolin was when she started out? “I guess the way that I really started thinking about the world through a climate justice lens is, I really learned by doing. I got involved in climate organizing,” Margolin shared with Bonnie. “At that time, I didn’t really know about climate justice; I just knew that the world was on fire and asked, ‘What can I do to take action?'”

Margolin’s new book, Youth to Power, is a guide precisely for young people who want to get involved in activism, event organizing, mobilizing, and using social and traditional media alike to further their cause. The book includes interviews with young activists from various corners of environmentalism as well. Supporting the message, Bonnie advocated for an inclusive approach to doing one’s bit in whatever capacity that matches our strengths:

What’s interesting about writing a book and looking at helping people to get involved is that I think we can see in social media, so much, things like powerful leading figures who are not only confidently holding the mic on a stage at a protest or organizing big events. I always think it’s really important to stress that there'[re] so many different roles within social change and important that sometimes people don’t want to be the leader […] yet every role is so important.

Proving that environmentalism is not a full-time job to which we have to sacrifice our other interests, Bonnie and Margolin also bonded over their shared love of film and storytelling.

To learn more about Zero Hour, climate justice, and managing anxiety despite the worrying state of our climate, watch the full interview below.

i chatted to jamie margolin about the effects the climate crisis can have on our mental health, her new book ‘youth to power’, identifying your place within social change and her inspiration to go to film school at new york university. go follow her @jamie_s_margolin and take action with @thisiszerohour