Daniel Radcliffe and Other Celebrities Sign Memorabilia for Fundraising Auction

In the wake of the COVID-19 pandemic, relief for many can’t come soon enough. Many companies have faced financial shortcomings due to a loss of workers, supplies, and other necessities. Ashgate Hospicecare in Chesterfield, England, is no exception to this hardship. The hospice facility recently revealed a deficit of nearly £2 million in lost revenue that threatens not only the jobs of caretakers but also the future of Ashgate.

To help combat this, Ashgate Hospicecare is holding an auction to raise some much-needed funds. Almost all the items going under the hammer are from pop culture icons. Celebrities like Daniel Radcliffe, members of the Rolling Stones, UFC fighter Conor McGregor, retired Brazilian soccer player Pelé, and others have signed pieces of memorabilia related to their professions to be auctioned.

The auction is currently underway, and buyers have been putting in bids online for over 20 items. One of the pieces we are most excited about is signed by Daniel Radcliffe. It’s a framed golden Hogwarts Express ticket. The ticket itself is signed by Dan and sits in front of a photo of Harry, Ron, and Hermione in the middle of the Battle of Hogwarts. So far, the signed ticket has a price of £245. Since bidding is currently open to the public and will be open for another five days, the price is expected to grow. 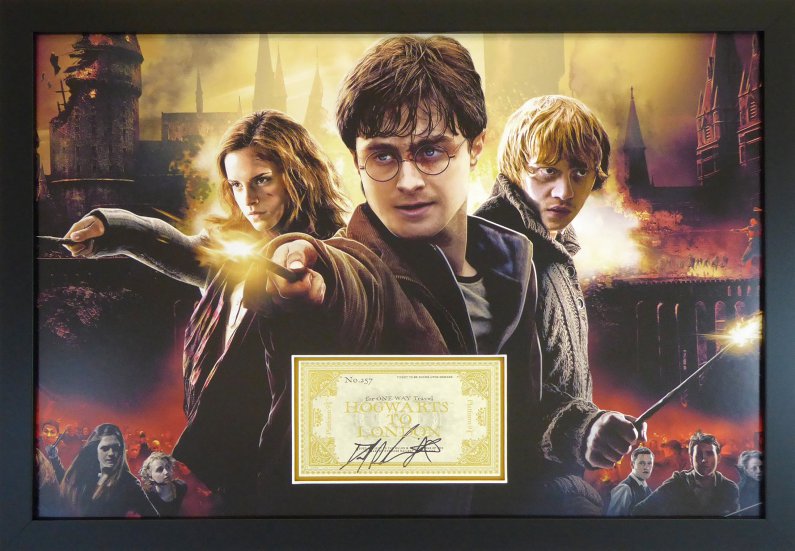 Other noteworthy pieces up for auction include signed photos of members of the Rolling Stones, a Stranger Things poster signed by Millie Bobby Brown (who played Eleven throughout the series), jerseys from several famed soccer players, and gloves from champion boxers. If you enjoy any of these sports, movies, TV shows, or musicians, there is a lot number with your name on it.

A spokesperson for Ashgate Hospicecare had this to say when the auction was announced:

We have had to transform the way we provide our care, in the most difficult circumstances, to reach more people than ever before, whilst many of the hospice’s fundraising events have also had to be cancelled or postponed. That’s why we are opening up this auction to raise much-needed funds during the most challenging time in our thirty-year history. Your support through this auction will help us continue to provide the exceptional end of life care for which we are known.

Bidders can see the available lots and current prices and place their own bids online.