MinaLima has never failed to impress us with art so gorgeous it practically comes to life. Creators Miraphora Mina and Eduardo Lima have been wowing fans with the art that is so distinctive to the Harry Potter franchise since the first and third film, respectively. Not only did their art have a major impact on the films, but they continued designing and illustrating through their company, MinaLima.

Based in London, England, MinaLima has released a new line of wallpaper and prints that will take you down the rabbit hole, so to speak. Alice’s Adventures in Wonderland, as so many know, depicts the journey of little Alice as she traverses the mysterious and tricky world of Wonderland. There are so many versions of the story it’s almost hard to keep track of them all. Thankfully, this new version isn’t something we’ve seen before.

The Alice’s Adventures in Wonderland art from MinaLima breathes new life and splendid color into the classic story, originally written by Lewis Carroll. 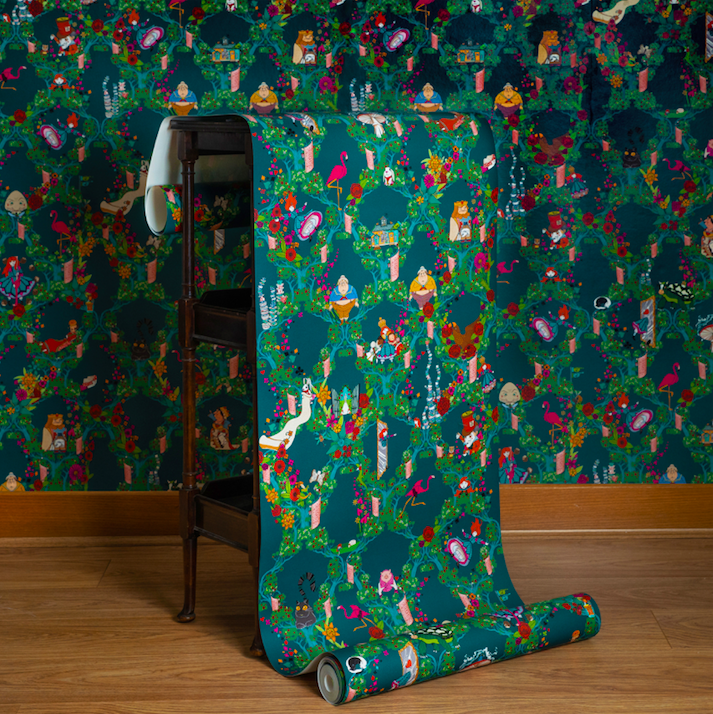 So many of the story’s characters and symbols can be seen throughout the collection. The detail alone is enough to make anyone go mad but in the best way. Roses, teacups, flamingos, hearts, beloved characters, and looking glasses make appearances on the wallpaper. Since there are so many details to include, one could argue that it would make for a very crowded wall. However, MinaLima manages to have a spot for every element without overwhelming the viewer at all.

Fans of the Disney version of Alice in Wonderland remember Alice as a blonde with a baby blue and white dress. MinaLima, on the other hand, reimagined the character and took things to a different level. She has hair almost as red as any Weasley and shows off a brightly colored pink and blue dress.

MinaLima’s delightfully reimagined Alice is accompanied on her journey of trials and tribulations by the frantic White Rabbit, the demented and terrifying Queen of Hearts, the intriguing Mad Hatter, and many other eccentric but cherished characters. 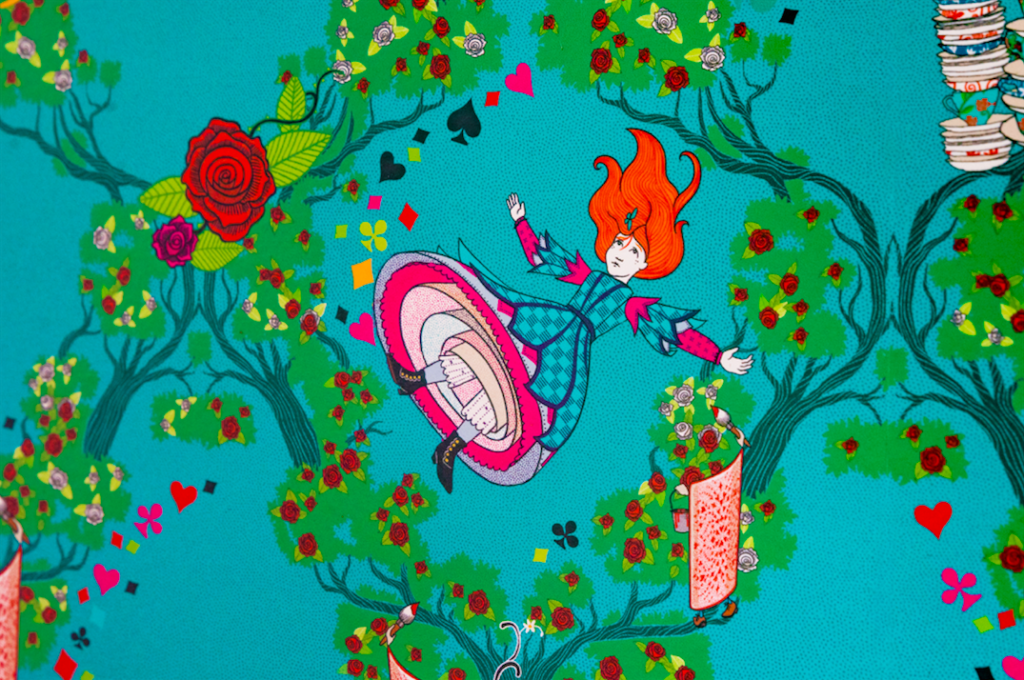 A dark and light version of the new wallpaper can be found on the MinaLima website for ordering, both starting at £89.00 each. On the off chance that you don’t want to cover your walls completely, you can purchase single-page prints or notebooks with similar cover art. The shop ships worldwide, so international buyers are in luck.

You can find these products and so much more on MinaLima.com.

This MinaLima “Alice’s Adventures in Wonderland” wallpaper features beloved characters such as Tweedledum, Tweedledee, Alice, and the Cheshire Cat on a dark blue background. 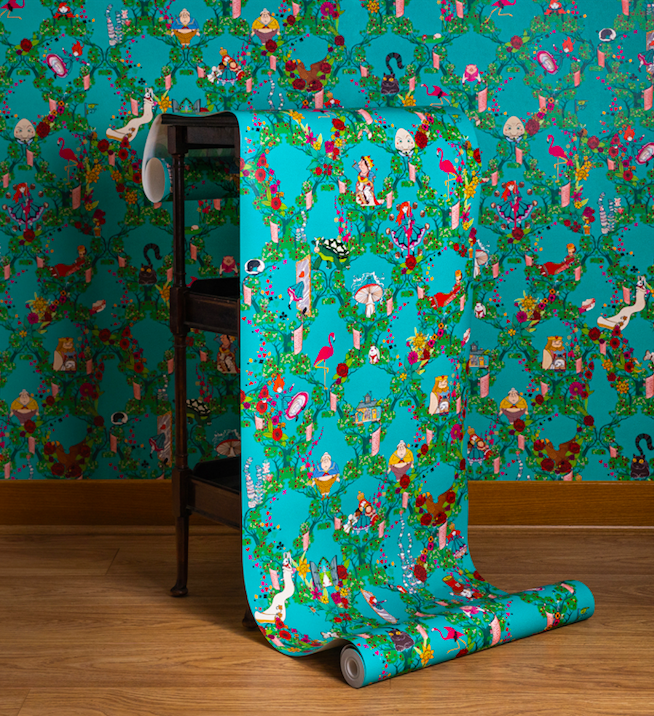 The Blue Caterpillar, the Queen of Hearts, and Alice running through the looking glass are just a couple of details that can be spotted on the MinaLima wallpaper. 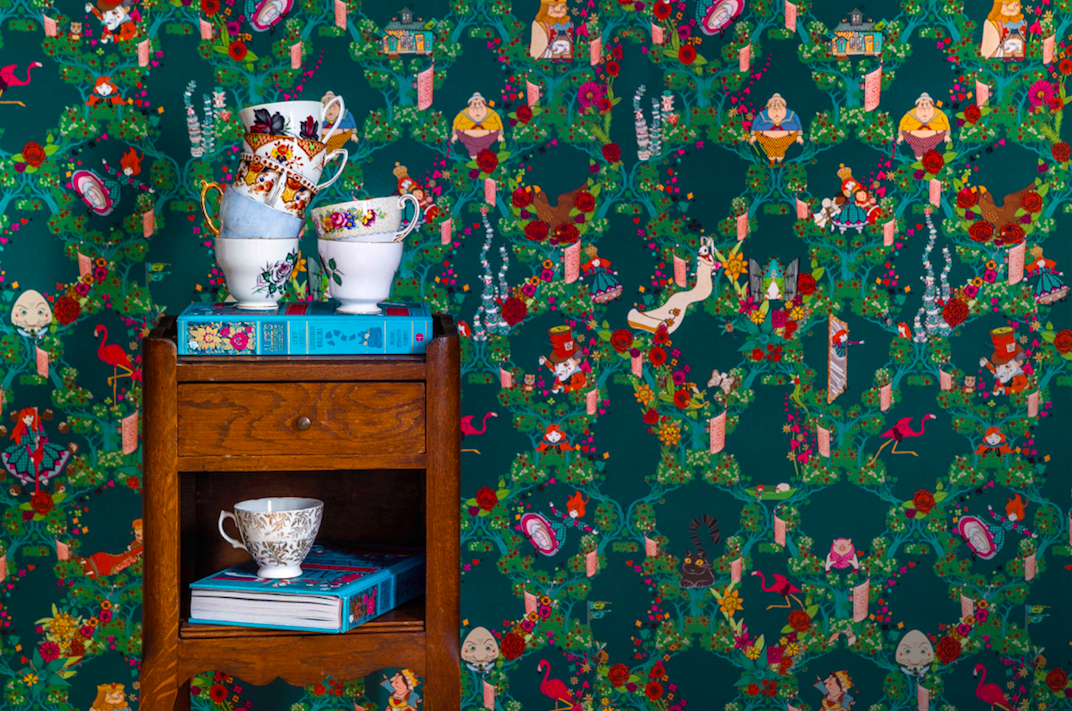 Colorful teacups and books sit in front of the MinaLima dark blue version of the “Alice’s Adventures in Wonderland” wallpaper. 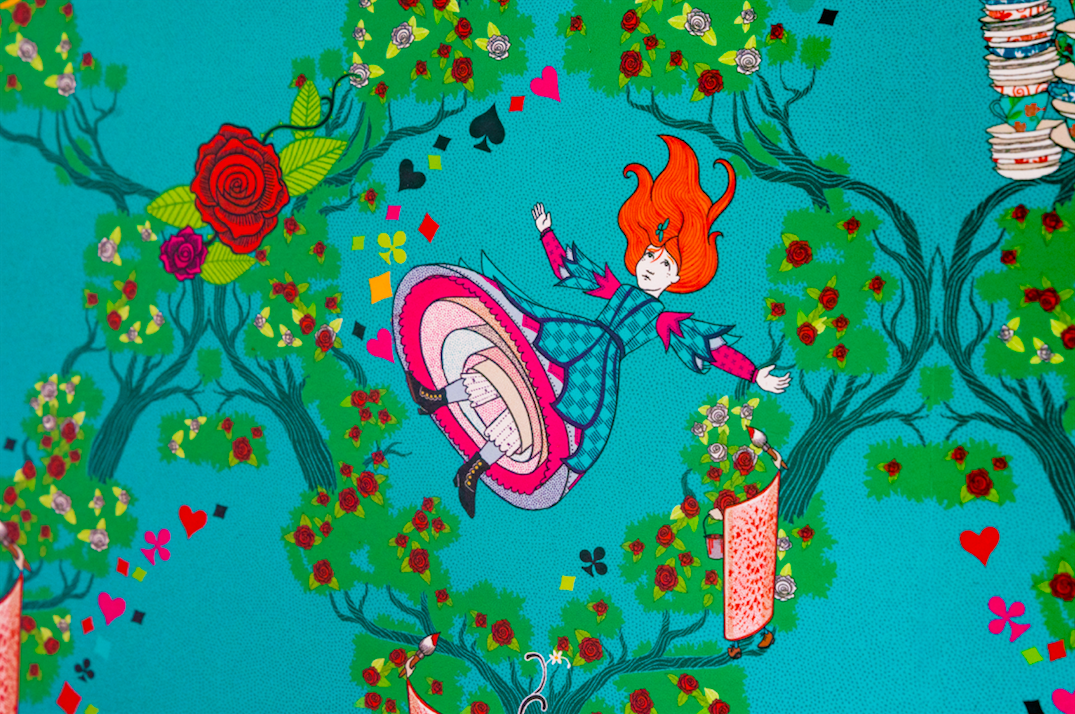 This MinaLima “Alice’s Adventures in Wonderland” wallpaper features Alice as she falls through the rabbit hole to Wonderland surrounded by white and red roses on a light blue background. 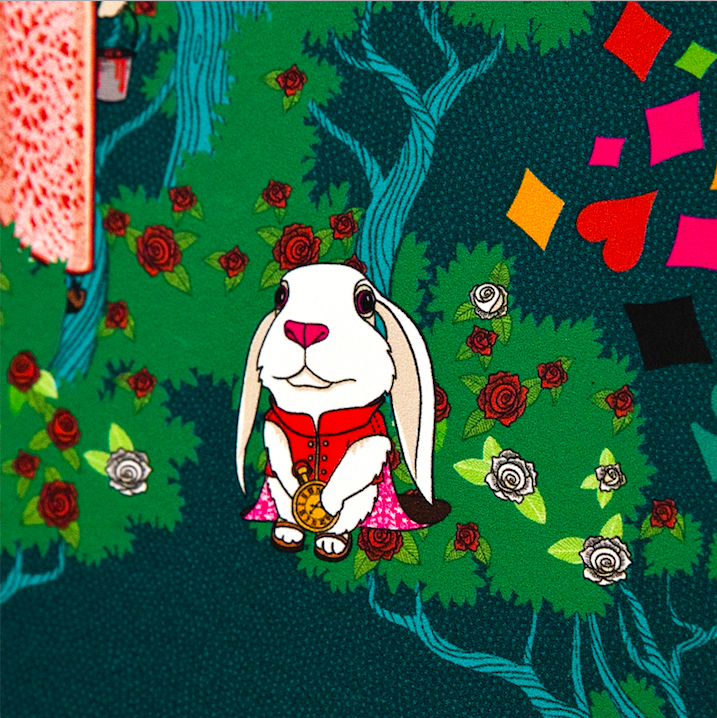 This zoomed-in portion of the wallpaper shows the White Rabbit holding his gold watch in front of a white and red rose bush. 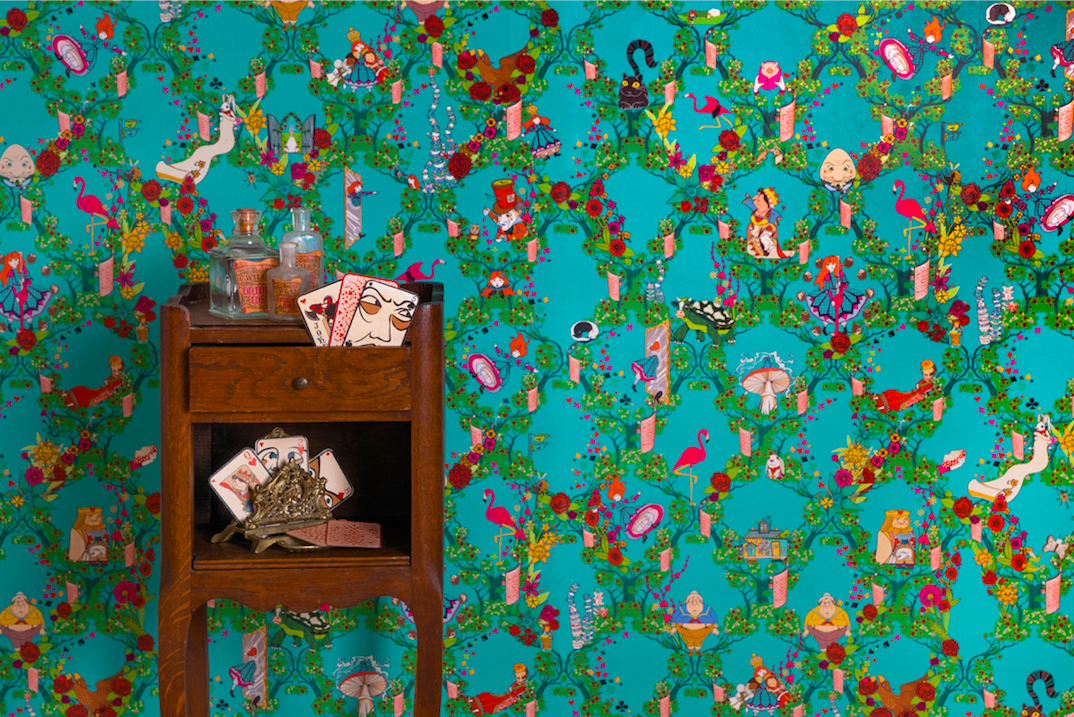 This MinaLima “Alice’s Adventures in Wonderland” wallpaper features many of Lewis Carroll’s characters sitting in a pattern of red and white rose bushes on a light blue background.
Press Release

Available now from House of MinaLima and minalima.com

MinaLima, the design studio behind the graphic art of the Harry Potter films, introduces a wallpaper design [that] features one of literature’s most treasured characters vividly reimagined: Alice. Originally published in 1865, Alice has remained a revered classic literary figure since, arguably becoming the most popular female character in English literature.

MinaLima's delightfully reimagined Alice is accompanied on her journey of trials and tribulations by the frantic White Rabbit, the demented and terrifying Queen of Hearts, the intriguing Mad Hatter, and many other eccentric but cherished characters.

Available in two colourways from MinaLima's London gallery, House of MinaLima, and minalima.com, the design is based on the artists' recently published volume of Alice’s Adventures in Wonderland & Through the Looking-Glass by Lewis Carroll, lavishly illustrated with bespoke artwork.

MinaLima Classics
MinaLima Classics, a growing collection of children’s stories, which have been enjoyed by many generations and remain some of the most beloved tales in literature, are completely reimagined by MinaLima from the outside to the pages within.

In the distinctive MinaLima style, the opulent hardcovers of the deluxe editions are debossed and gold foiled, encasing the delightfully redrawn stories. In addition to the vivid illustrations on almost every page, interactive elements throughout each book create an immersive experience for the readers, allowing them to truly become part of literature’s most treasured characters.

Each title – Peter Pan, The Jungle Book, The Beauty & [t]he Beast, The Little Mermaid, The Secret Garden, Alice’s Adventures in Wonderland & Through The Looking-Glass, The Adventures of Pinocchio, and the upcoming The Wonderful Wizard of Oz – is complemented by a collection of limited[-]edition art prints featuring artwork from the book, available exclusively at House of MinaLima and MinaLima.com.