UPDATED: First Look at Rupert Grint in Season 2 of “Servant”

Rupert Grint will return as the suspicious Julian Pearce in the Apple TV+ psychological horror series Servant when Season 2 hits screens in early 2021.

Syfy revealed a first look at the upcoming series, which also sees Toby Kebbell and Lauren Ambrose reprise their roles as Sean and Dorothy Turner. Not much is known about the story line for the upcoming season, but what we do know is that it follows on from the events of the first season, which saw the Turners’ nanny, Leanne (played by Nell Tiger Free), leave the family after many strange and frightening occurrences involving their son Jericho.

Grint’s character was integral to Season 1, casting suspicion over Leanne and her motivations while trying to support his sister and brother-in-law. One of the first images released from Season 2, which shows Grint, Kebbell, and Ambrose in mid-discussion, suggests that Julian continues to be a central character and involved in the Turners’ search for answers surrounding Leanne and Jericho. 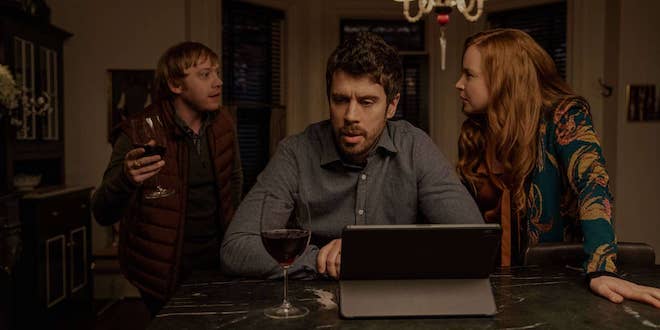 In a previous interview about his character, Grint has called Julian a “stand-in for the audience” and someone who believes they are always one step ahead and can solve anything, something that was put to the test in the first season of Servant:

Julian [is] one of these people [who] thinks he can solve everything. He always thinks he’s one step ahead. And it’s only really in our interactions [with Leanne] that none of those mechanisms that he’s developed, being in the financial district and stuff, really work with her. So it’s a lot of interesting different dynamics.

The teaser trailer released by Apple TV+ raises more questions than answers about the upcoming season. It shows a family in turmoil, unsure of what to believe, desperate for answers, and ultimately still grieving for their son. Oh, and the music suggests that this season may even be scarier than the last!

Season 2 of Servant will arrive on Apple TV+ on January 15, 2021. All ten episodes of Season 1 are available to watch now if you need to catch up on the turmoil of the Turner family before the new year.

We now have confirmation from M. Night Shyamalan that Apple TV+ has renewed Servant for a third season. His dream is to tell the story in 40 parts.

I feel so lucky to announce @AppleTV is renewing #Servant for a season 3 before S2 even airs! Apple has been such a good partner & has always supported this show. I've dreamed of telling this story in 40 parts. I know that's not guaranteed by any means so this is wonderful news.

Check out the official trailer that’s been released for the upcoming season in January. Questions and suspicions continue to rise. What storyline do you hope this season follows?