Back in September, LEGO Ideas kicked off a building contest to celebrate that it’s time to take the train back to Hogwarts. The competition, which was titled Head Back to Hogwarts, requested that contestants build their favorite return to Hogwarts scene, and now, the winner has finally been announced.

The judges had a very hard time narrowing down 660 Back to Hogwarts LEGO models to just three, but they finally made a decision, and these designs are truly magical.

In third place came Memories of Home by Jcreations912. This creator’s versatility and creativity are what caught the judges’ eye. Using the versatile frog element as the head of the dragon and soldier helmets to create the tops of the Hogwarts towers showcased a magical imagination. This creation is definitely worthy of its third place. 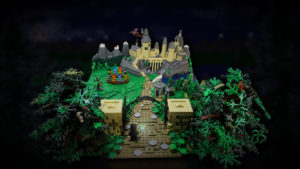 Harry’s First Year at Hogwarts by carloslc13 quite literally blew the judges’ minds.

We loved how this model didn’t limit itself to showing framed vignettes, but instead – quite literally – broke ‘the fourth wall’, and continued the storytelling beyond the confining limits of the book pages: truly magical, just like movies do! 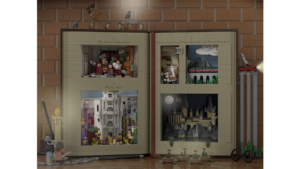 The grand prize winner is a very deserving model. The detail is amazing, especially the flying Beauxbatons carriage and Durmstrang ship. Titled Reunion of the Wizarding Schools by nkolbeck, this model is a true masterpiece and well deserving of first place. 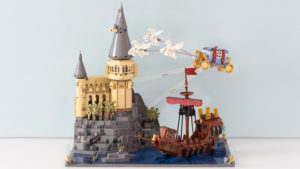 The winner will be getting a massive 75978 Diagon Alley package, among other things, as a reward for their magical craftmanship. The rest of the winner’s package includes the following:

That’s a lot of awesome Harry Potter goodies, and definitely enough to make the rest of us consider entering next time.

This competition just goes to show once again that Harry Potter fans are indeed talented, and in a year as dire as 2020, this contest must surely have been a nice escape for some Potterheads.

What do you think about the winners? Do you agree with the places that were awarded to each of these models? Drop your thoughts in the comments.