Oliver Dall, the owner of the wizarding shop Oliver’s Brighton, is doing all he can this year to raise funds for the children’s charity Rockinghorse.

Rockinghorse raises money for the Royal Alexandra Children’s Hospital in Brighton, United Kingdom, which aims to buy lifesaving equipment and create enhanced services to improve the lives of babies, children, and young people in Sussex.

Dall owns Oliver’s Brighton, a multi-award-winning shop that stocks an array of magical items from wands and broomsticks to chocolate frogs and games.

The staff members of Oliver’s Brighton try to do as much charity work as they can. Last year, Dall visited the hospital dressed as one of Santa’s elves delivering wands to the patients. He wanted to visit this year but hasn’t been able to due to the pandemic. Dall has spoken about the importance of supporting the charity.

Especially around Christmas time, other children get to spend time at home with their families, and some are stuck in hospital, and that sucks. The reason why we support them is because, other than NHS staff doing amazing work, there isn’t always enough money for specific equipment for the children. They help children to have the best experience they can while they are in hospital, and [that] keeps them on a positive note.

Since he couldn’t visit in person, Dall decided to set up an online raffle to support Rockinghorse, with the winner receiving an incredibly detailed, hand-painted sculpture of Hogwarts School of Witchcraft and Wizardry, which is worth over £300.

Dall then transformed from last year’s Christmas elf to the most well-known elf in the Harry Potter series: Dobby the house-elf, who first appears in Harry Potter and the Chamber of Secrets. To raise awareness of the raffle, he walked an entire marathon dressed as Dobby, completing it in eight hours on a treadmill supplied by Revolution Personal Training Studios in Brighton. Dall discussed his experience of completing the marathon while wearing the Dobby mask.

It was not that bad, really; the only thing is, the mask was a little uncomfortable and a little humid. Without going into too much detail, there was a lot of sweat. 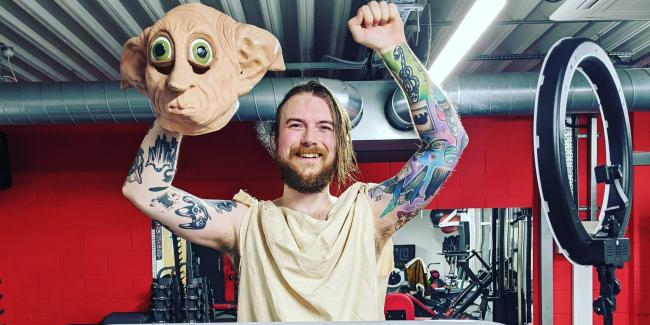 Oliver Dall raised money for charity by taking part in a marathon dressed as Dobby the house-elf.

Without the incredible continued support and donations of the public, Rockinghorse could face an uncertain future, and Dall hopes his efforts will draw national attention to the work of this amazing charity.

The winner of the raffle was drawn a few days ago, and so far over £1,000 has been raised. The raffle is still open for donations.

Congratulations to Amy Trussler, the winner of the Hogwarts’ model competition organised by @oliversbrighton. In total the competition raised over £1200 which is a fantastic amount! Thanks so much to Oliver and all his supporters.https://t.co/hM0zV1qcZG#RemeberRockinghorse pic.twitter.com/yfuPibXdmK

Has Dall’s dedicated work inspired you to donate or carry out your own fundraising? Which Harry Potter character would you dress up as when doing a marathon? Let us know in the comments.