Ok, so it has only been a month, but from previous experience, we think that is plenty of time to test whether a New Year’s resolution has stuck or not.

You may have joined us on December 31 where we saw in the New Year at the Leaky Cauldron with a number of our wizarding friends albeit virtually. If you didn’t see that report, let us quickly recap: It was a wonderful night – from what we can remember – full of laughter, frivolity, and Tom the barman’s finest Salazar Stout. Our newest staff writer actually kept a running commentary of the evening and reported live throughout the night – with the agreement of everyone attending, of course. She reported a lot.

What she didn’t share though were the numerous claims and promises of yearly resolutions. So imagine our surprise when she found a list hidden in the depths of her dragon hide bag titled “Harry Potter and the New Year’s Resolutions.”

We dispatched her quick smart to follow up on these claims and confirm whether each witch or wizard was true to their (admittedly drunken) word. Over to her!

Hermione Granger: To not be a know-it-all

Oh, Hermione, we do love your ambition, but in this case, it was a little too high. I didn’t even need to interview her as this resolution was broken five minutes after she made it when Luna tried to explain what Freshwater Plimpy gin was.

Ron Weasley: To get a gym membership

Also ambitious, this resolution was particularly curious to me as Ron announced it when he didn’t know what a gym was. I’m delighted to report he has still kept it and offered to do a dead press with me after this interview. I said no.

Bellatrix Lestrange: To stop being a bitch

From what I recall (my writing was questionable at this point), Bellatrix promised to stop being a bitch. This has not stuck as she immediately hexed me with a toenail growing curse before I had even blurted out “hello” at our interview appointment. So I guess she lasted a month.

Luna Lovegood: To spend more time with her father

Luna wasn’t available for an interview. See evidence below.

See above for the obvious answer to this resolution. We’re sorry, Neville! Better luck next year. 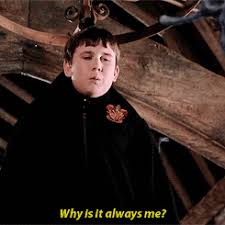 Sirius Black: To stop sleeping around

Sirius has not stuck to his resolution. Don’t ask me how I know.

Harry Potter: To stop washing the kids’ red Quidditch robes with all their white clothes

Harry said he is doing well with this resolution so far. However, he was wearing a blotchy pink t-shirt at this interview, so I question his answer.

Charlie Weasley: To find hobbies other than dragons

Charlie has tried his best here, but he let slip that his mother had understood “hobbies” to mean finding a girlfriend, and therefore, she has never missed a chance to set him up on a date this year. Charlie has given up his resolution.

Hmm, she is not doing too well on this one. Not only did she call Charlie five times, interrupting my interview with her, but I now have a date with him on Friday.

Possibly the best resolution I have ever heard, I am glad to report that Dobby is sticking to it well. Though, one thing he should have thought of is not to wear them all at once.

This was a travesty of a resolution, and the whole room cried “NO” when Madam Rosmerta made it. She was firmly told by everyone present that she looks beautiful just as she is and that her curves are sexy. Resolution resolved.*

Arthur said he is sticking to this; however, we held the interview at his house, and I noticed a rather large hole in the wall of his shed that was smoking slightly.

Draco Malfoy: To give a Sickle to the Ministry event team every time he says “Pottah!”

There you have it. Were you surprised? Who would you have guessed stuck to their resolutions or not? I for one am not surprised and am most pleased about Draco breaking his since the Ministry social club fund is looking very healthy.

*Dear Quibbler readers, if anyone tells you to lose or put on weight and you don’t like it, tell them to go fluff themselves. Or better yet, call us, and we’ll set Grawp on them. #YouAreBeautiful