Imelda Staunton is well known to Potterheads for portraying the infamously evil Dolores Umbridge from the fifth installment of the Harry Potter film series: Harry Potter and the Order of the Phoenix. Umbridge is a terrifyingly cruel character, with many believing she is worse than Voldemort himself, and while Staunton admitted that playing horrible characters such as Umbridge is “the best,” the multi-award-winning actress is now playing a completely different role: Queen Elizabeth II in the final two seasons of The Crown. 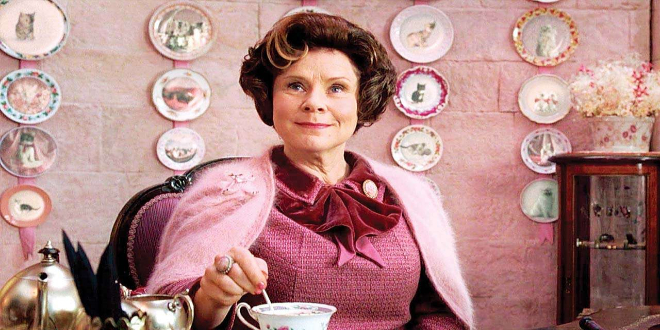 Staunton appeared on the BBC’s Woman’s Hour on the 75th anniversary of the show and discussed how she faces an “extra challenge” compared to that of her predecessors, Claire Foy (Seasons 1 and 2) and Olivia Coleman (Seasons 3 and 4), because she is portraying a much more recent version of Queen Elizabeth.

I think my sort of extra challenge, as if I needed it, is that I’m now doing the Queen that we’re a little more familiar with. With Claire Foy, it was almost history, and now I’m playing one that people could say ‘she doesn’t do that,’ ‘she’s not like that,’ and that’s my personal bête noire.

“The Queen might be the original Spice Girl…”
National treasure Imelda Staunton shares the preparation she’s been doing for her role as the third incarnation of the Queen in @TheCrownNetflix https://t.co/2C8YJT1Ec8 pic.twitter.com/9vxQIja784

Showing her support for her successor, Colman admitted in an interview in October 2020 that Staunton has “already got a much better walk than me.”

The Crown, which will end with its sixth season, will follow the royals into the early 2000s, and while it is based on true events, it has caused much controversy, especially around the fourth season’s portrayal of the relationship between Prince Charles and Princess Diana.

This led to United Kingdom Secretary of State for Culture, Media and Sport Oliver Dowden demanding that a disclaimer be added to the program stating that it is fictional. Netflix declined and defended its portrayal of The Crown.

We have always presented ‘The Crown’ as a drama, and we have every confidence our members understand it’s a work of fiction that’s broadly based on historical events. As a result, we have no plans, and see no need, to add a disclaimer.

Staunton gave her own opinion on the matter when the presenter of Woman’s Hour, Emma Barnett, asked Staunton whether she believes a disclaimer should be added, clarifying to the audience that the imagined events are based on real occurrences.

I think that is up to producers and directors. This isn’t verbatim; this isn’t taken from diaries. You’ve got to use your imagination, and I’d like to allow the audience a bit of intelligence. You can’t know that’s what Margaret and Elizabeth were talking about.

Have you been watching The Crown? Are you looking forward to watching Imelda Staunton’s version of Queen Elizabeth II?