Ralph Fiennes on His Latest Film, “The Dig”

As we reported nearly two years ago, Ralph Fiennes (Lord Voldemort) will make an appearance as M in No Time to Die later this year. While we are waiting for the pushed-back release of the next Bond movie in October this year, by which time we hope to see the movie in a theater, with a big bucket of popcorn in our lap and tall people blocking our view of the screen (which, honestly, sounds like a dream at this point), we can get our Fiennes fix on the small screen as early as this month as Australian director Simon Stone’s The Dig gets a Netflix release. 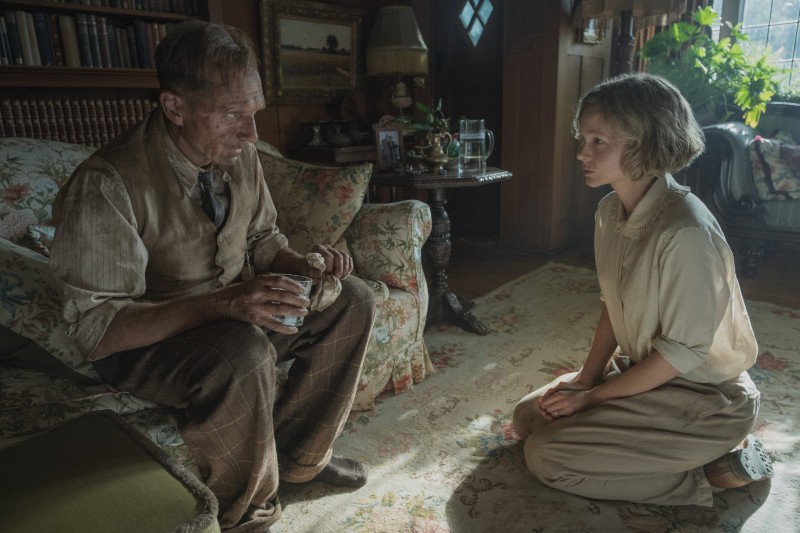 Ralph Fiennes and Carey Mulligan in “The Dig”

Based on a true story, The Dig is set in England on the eve of the Second World War. A wealthy widow, Edith Pretty (Carey Mulligan), hires an amateur archaeologist to excavate the burial mounds on her estate. The self-taught and undervalued archaeologist Basil Brown, played by Fiennes, discovers an entire ship and Anglo-Saxon burial mound buried under this Suffolk estate. History unfolds, and with it, a touching tale of human connection under a class system and a siege from an enemy looming overhead.

Before he stepped on the set, Fiennes “had the most enriching and rewarding time researching” Brown, who taught himself archaeology, astronomy, and multiple languages. The unlikely scientist was held back by his background, as one may be today, although less so than in the 1940s, according to Fiennes:

I think it is an uncomfortable truth that English society is built on these strata – these hierarchies. I sense that enlightened people – people with a sense of the future – are wanting to progress away from that. I think there’s a drive and there’s activism to break down these traditions. But yes, I think they still linger.

Fiennes praised the way human connection across class divides is treated in the story adapted from John Preston’s novel to the screen by Moira Buffini:

I was moved. […] I think also the central relationship between Basil Brown – that’s my character, Basil Brown – the self-taught archeologist from a poor, working-class, agricultural background, and Mrs. Edith Pretty, who is a wealthy lady, widow, upper-middle class, maybe. Anyway, the connection between them, on the page… that moved me. I think it’s about kinship and closeness and connection with someone, not to do with the romantic or sexual. It’s just it was about, when you go through life, those connections with people. They can be with a teacher or with friends of your parents or they can be just a friend, but those deeper connections where you feel you’re seen and I guess implicitly respected or understood by another, those are very valuable. And it was the fact that it was written so beautifully.

Although Pretty was originally going to be played by the age-accurate Nicole Kidman, Promising Young Woman star Carey Mulligan was finalized to take on the role and filming began in 2019. Speaking of what attracted her to the role, she shared that she loves movies that “exhibit a real sense of wonder. And I felt like that’s what the film does, in a way.” For Fiennes, the setting actually has a real-life connection:

My childhood was in Suffolk, which is the county in England […] where the Sutton Hoo was discovered. And I think [of] echoes and resonances from my father farming in Suffolk and swimming in the sea on the coast. And I’ve gone back to Suffolk over the years and feel a strong connection with that part of England, very strong. So to be asked to be in a film [that] is so specifically set in Suffolk… And it was very important to me that we shot some scenes and settings in Suffolk – landscapes, roads, coastline – and also to get the accent right.

The Dig had a limited release on January 15. It drops on Netflix to a worldwide audience on January 29.