Bill Nighy, who played the brief role of Rufus Scrimgeour in Harry Potter and the Deathly Hallows – Part 1, will be narrating Meerkat Manor: Rise of the Dynasty, a docuseries that will be the latest installment of the Meerkat Manor saga.

The news was announced by BBC America, which coproduces the series alongside Oxford Scientific Films.

The original series, Meerkat Manor, aired from 2005 to 2008. Its reboot will delve into the gut-wrenching and intense journey of three families who are the descendants of the famed meerkat matriarch, Flower, who was killed by a cobra in an episode that aired in 2007.

The series will explore the harsh reality of what it is like to be a meerkat; fighting for survival against neighbors and rival bloodlines, battling against each other for food and resources.

Due to climate change, these necessities are becoming ever harder to find, and it’s also causing a dramatic transformation of the meerkats’ home: the Kalahari Desert in South Africa. Its seasons are getting drier and hotter, and rainfall is becoming irregular and rare. The survival of the meerkats will come down to the strength of each family’s leader. 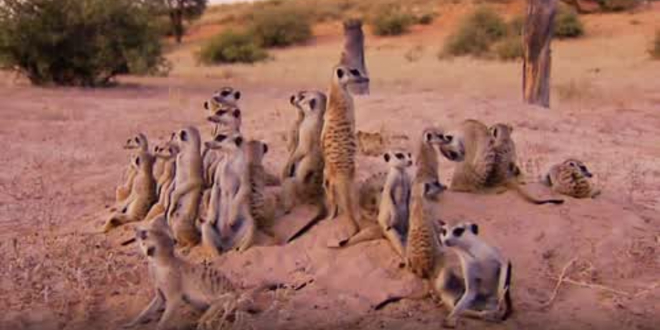 Nighy has recorded narrations (including audiobooks) and carried out voice acting before. Meerkat Manor: Rise of the Dynasty will be Nighy’s first time narrating the United States version – while he narrated the original version that was released in the United Kingdom, the American version was first narrated by Sean Astin (the Lord of the Rings trilogy), then Stockard Channing (Grease, Practical Magic).

The series will be made up of 13 half-hour episodes and will premiere in the summer as part of the programming lineup of BBC America’s Wonderstruck.

Are you looking forward to discovering what Flower’s descendants have been up to? You can catch up on the original series on BBC iPlayer, Sky, or Amazon Prime.