Evanna Lynch, who played the quirky and kindhearted Luna Lovegood in the Harry Potter film franchise, is set to appear on her Harry Potter costars James and Oliver Phelps’s (Fred and George Weasley) podcast Normal Not Normal.

Joined by a range of guests, including other Harry Potter actors such as Katie Leung (Cho Chang) and Natalia Tena (Nymphadora Tonks), the podcast features in-depth conversations about what being normal really means.

In Lynch’s episode, which will be available on February 12 and has been shared exclusively with Metro, she discusses how heartbroken she was on discovering that Albus Dumbledore’s funeral scene wasn’t going to make it into the film version of Harry Potter and the Half-Blood Prince.

You want to honour the characters that so many people love and have been on this huge journey with.

That’s why I was so upset that they didn’t have a funeral for Dumbledore after all he did, all he meant to Harry, all he gave… 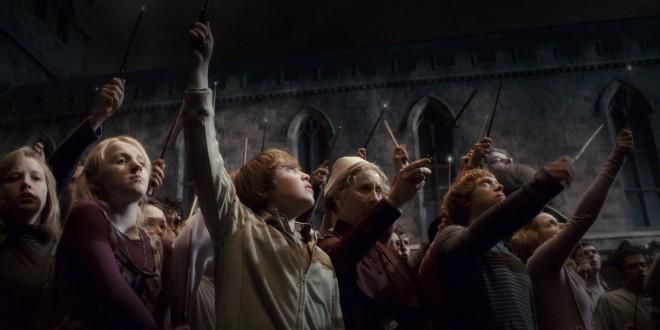 Lynch as Luna Lovegood (left), raising her wand alongside fellow Hogwarts students and staff after Dumbledore’s death in “Harry Potter and the Half-Blood Prince”

Lynch described her younger self as a “really obsessive Harry Potter fan” and that for a while, it was her “whole identity.” It was due to her love for Harry Potter that she decided to go to the producer, David Heyman, to express her feelings about the nonexistent funeral scene.

I even went to David Heyman’s office, as a fan. I thought, ‘Right. I’ve got to speak up for my community.’

And David Heyman was like, ‘It’s just too expensive.’ And I actually said, ‘Take some of my paycheck, because I think it’s worth it.’ And he was like, ‘Evanna, it wouldn’t cover it!’

We wish that Dumbledore’s funeral had been included in the films too, but instead, a wand memorial scene took place, which Lynch commented on, saying, “They CGI’d tears onto me because the scene wasn’t sad enough.”

While the wand memorial scene was emotional, it would’ve been nice to have been able to give the on-screen Dumbledore a proper send-off.

What are your thoughts on Dumbledore’s funeral being excluded from the film? Are you looking forward to listening to what else Evanna has to say on her episode of Normal Not Normal?

You can watch the podcast’s trailer below, and remember to pop a note on your calendars on February 12, perhaps something along the lines of “Listen to Evanna Lynch on Normal Not Normal!”