With the magic imbued from the set of our favorite movies, authentic props from film productions remain a sought-after item to add to any collection. The Harry Potter film series is no exception, and most Potter collectors would likely step on a house-elf for a chance to own a prop. Thankfully, there shouldn’t be any need to trample any poor house-elves. On April 29, Julien’s Auctions will hold its largest film memorabilia auction, featuring over 800 lots of props and costumes spanning several decades and film genres. For Potter fans, some props from the film series will be up for auction, including Harry’s wand that was possibly used by Daniel Radcliffe in Harry Potter and the Goblet of Fire.

The two-day event begins on April 28 with the Hollywood Legends & Luminaries Auction featuring items associated with Hollywood stars from the Golden Age to modern times. On the second day, Julien’s Auctions will hold the Hollywood Sci-Fi, Action, Fantasy and More Auction, which will include props, costumes, and memorabilia from milestone films and film franchises such as Scarface, Alien, and Star Wars.

On the second day, Potter fans will be excited to see a few props from the Harry Potter film franchise, including Harry’s wand from Goblet of Fire and a Hogwarts acceptance letter envelope with a wax seal from Harry Potter and the Sorcerer’s Stone. It would be pretty amazing to receive a faux Hogwarts acceptance letter in that envelope. The other big-ticket Potter item is one of Snape’s wands. While it would be bittersweet to know if Alan Rickman used the wand and from which movie, unfortunately, the auction house has not provided any details. In a press release, Julien’s Auctions listed its lot of Potter props and their estimated values:

Harry’s wand from “Harry Potter and the Goblet of Fire” is going up for auction at Julien’s Auctions. The wand is estimated to fetch upwards of $10,000. 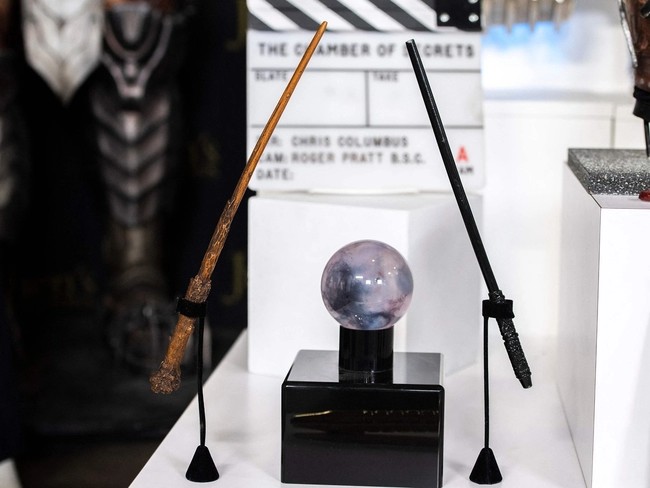 Alongside Harry’s wand, Julien’s Auctions will also feature one of Snape’s wands, which is estimated at between $3,000 and $5,000.

Though not mentioned in the press release, it’s intriguing to note that in the photo above, taken at a preview for the auction, we can see a cloudy orb that appears to be a prophecy from Harry Potter and the Order of the Phoenix. Also, in the background, you can spot the clapboard from Chamber of Secrets. The clapboard wouldn’t necessarily be a prop, but still a fantastic piece of memorabilia. Unfortunately, we cannot confirm if these items are authentic to the production or if they’ll even be featured in the auction. There’s a possibility that they could simply be decorations for the photos.

Aside from these treasures, there is one other prop associated with another Wizarding World alumnus. Prior to his turn as Gellert Grindelwald in Fantastic Beasts and Where to Find Them and Fantastic Beasts: The Crimes of Grindelwald, Johnny Depp played the title character in Edward Scissorhands, and his screen-used “scissorhand” prop gloves are also up for auction.

Unfortunately, additional information regarding each lot has not been revealed. However, if you are in Beverly Hills, California, you can view the props in person at Julien’s Auctions’ public exhibition taking place from April 26 to April 29. The Hollywood Sci-Fi, Action, Fantasy and More Auction will take place on April 29 and is broken up into two sessions. The first session will begin at 10:00 a.m. PT with the second session starting at 1:00 p.m. PT. All items are online exclusives, which requires you to sign up to bid for any lot.

Do you plan on bidding on one of these magical artifacts? Perhaps you already own an authentic prop from the Harry Potter film series? Let us know in the comments or tag us on Instagram.