Alfred Enoch, who grew up on-screen as Dean Thomas in the Harry Potter films, has gone on to star on stage in the West End and in hit TV shows such as How to Get Away with Murder. It’s been a long year for all in the entertainment industry, and we are eager to check in with the actor who is now starring as Lord Henry Wotton in a very modern adaptation of Oscar Wilde’s The Picture of Dorian Gray, streaming only this month. In a recent interview, he discussed the multiple Academy Award-nominated Ma Rainey’s Black Bottom, Viola Davis, and his former Potter costars.

Enoch starred in all but one of the six seasons of How to Get Away with Murder, which tells the intricately fabricated story of a group of law students and their professor, played by Viola Davis, as they cover up their tracks, as the title says. He says he is excited for Davis, who is nominated for Best Actress at this year’s Oscars for her role in Ma Rainey’s Black Bottom, based on the play penned by playwright August Wilson. It could be her second Academy Award after winning one for Fences, another play and movie written by Wilson. Enoch is full of praises:

Look, that’s a fantastic play. I was lucky enough to see it. They did it at the National Theatre… how many years ago? And so when I heard that Viola was doing the movie and that Chadwick Boseman was going to be in it, I was so excited to see it. And I sat down with my girlfriend and watched it, and it’s fantastic. I mean, August Wilson is really a titan, and his storytelling and the way he gives full scope to the characters, he paints them in their full humanity and doesn’t shy away from the difficulties of the Black experience.

After a full year of lockdowns, making acting work difficult, Enoch enthusiastically agreed when asked about whether he misses working with his costars.

Ah, man, I miss people!  Yeah, you miss working with people because it’s fun. If you’re lucky enough to still be taking opportunities to tell stories and do things, you miss the experience with that person, and you’re excited about the fact that you got to work with them. And that’s great, but I get to tell stories for a living. So I’m not going into work being like, ‘Ah, but this other job.’ I’m just glad I get to be doing what I love.

Without giving away massive spoilers about what happens to Enoch’s characters on How to Get Away with Murder, we can only let you know that it was after missing a whole season that he returned to the set right before the film industry came to a halt. But when he did, it was a joyous experience. “It was lovely to see everyone, and being back on that set was like being with family,” he shared of the memory. “I spent some wonderful years there. So yeah, I do miss these people.” 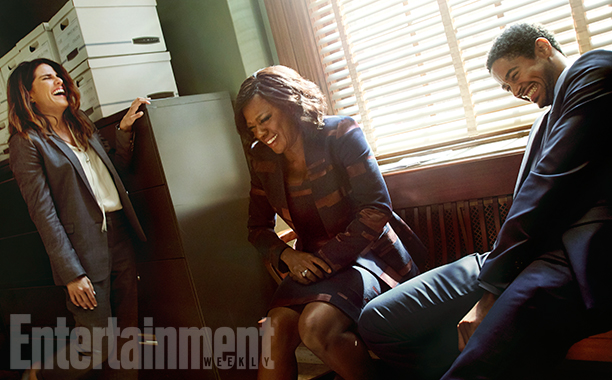 Karla Souza, Viola Davis, and Alfred Enoch on the set of “How to Get Away with Murder” (Credit: Art Streiber)

And what about his fellow witches and wizards from Potter? The Hogwarts graduate says he enjoys having an excuse through the franchise to stay in touch with his former costars:

On the Harry Potter front, we happily get little things pop up and we get together and do a charity something or other, or there’ll be something. It’s just, the people who you’ve cherished the time with, you want to keep them in your life.

You can catch up with How to Get Away with Murder on Netflix or get your tickets quickly to get a dose of Alfred Enoch in Dorian Gray. Or you can start with watching the full interview below.